Accessibility links
Our Robot Overlords Are Now Delivering Pizza, And Cooking It On The Go : The Salt A Silicon Valley startup wants to use technology to solve the pizza paradox. It's a food that's meant to be delivered but never tastes quite as good upon arrival. 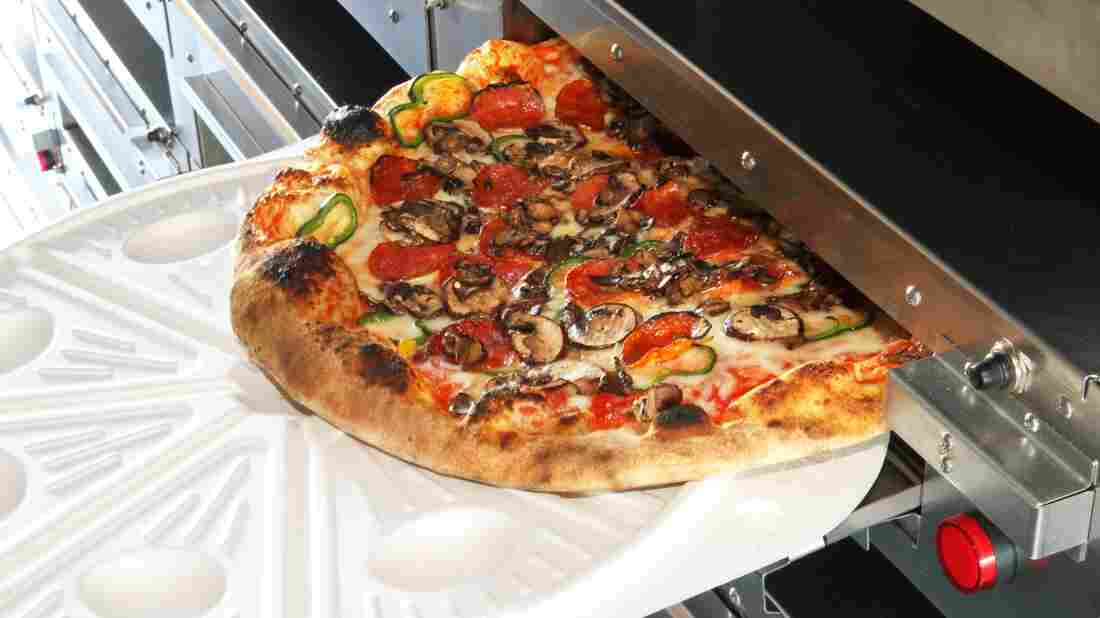 Mobile ovens inside the delivery truck cook the pie right before it reaches its destination. Zume Pizza hide caption 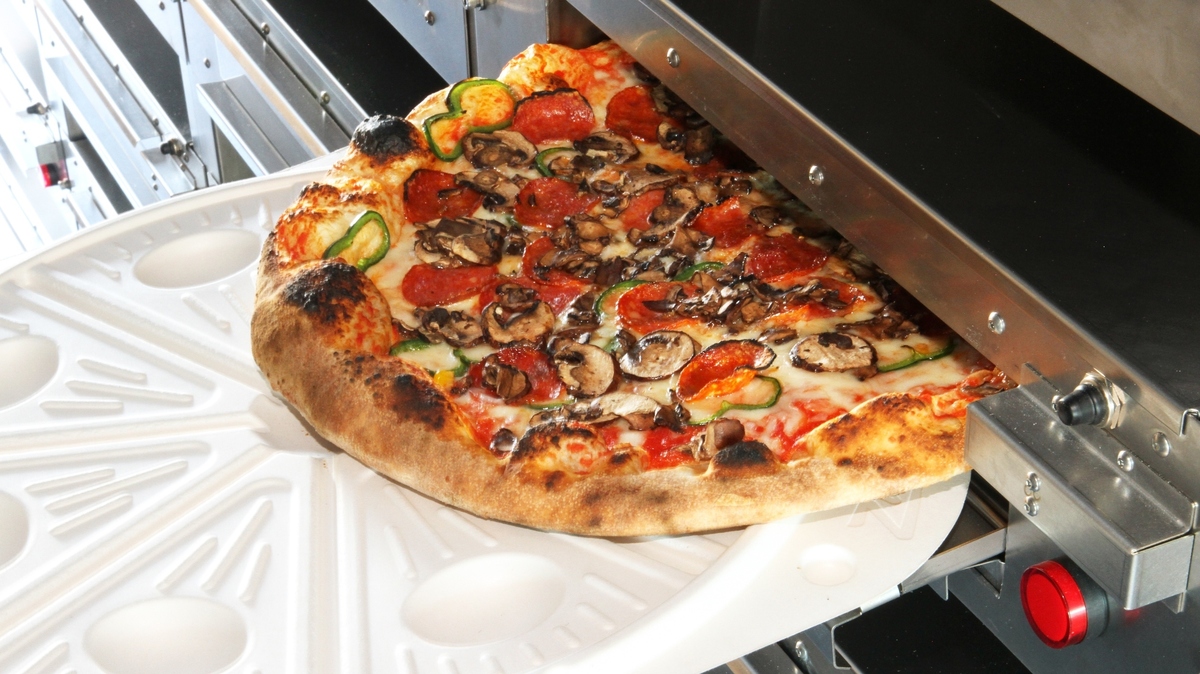 Mobile ovens inside the delivery truck cook the pie right before it reaches its destination.

In Mountain View, Calif., a couple of miles down the road from Google, there's a new pizza shop. Only instead of a dozen blue-collar workers pouring marinara sauce, Zume Pizza has — you guessed it! — robots and algorithms running the show.

Their job is to solve a familiar problem: It's game night. You order pizza for you and your buddies. It arrives later than you'd hoped, aaaand it's cold.

"Pizza is not meant to sit in a cardboard box, ever," Zume co-founder Julia Collins says. "The best pizza you ever had came right out of the oven."

This is the great paradox: Pizza is a delivery food that doesn't taste as good delivered, when it's room temperature and soggy.

Collins and I are standing inside Zume's solution: a delivery truck that looks standard — like something from FedEx or UPS — only it has 56 mini-ovens. They're neatly stacked into two racks on wheels.

Here's how it works. A customer places an order on the app. Inside the Zume factory, a team of mostly robots assembles the 14-inch pies, each of which gets loaded par-baked — or partially baked — into its own oven.

Whether the truck has five pies or 56, it needs just one human worker — to drive, slice and deliver to your doorstep. 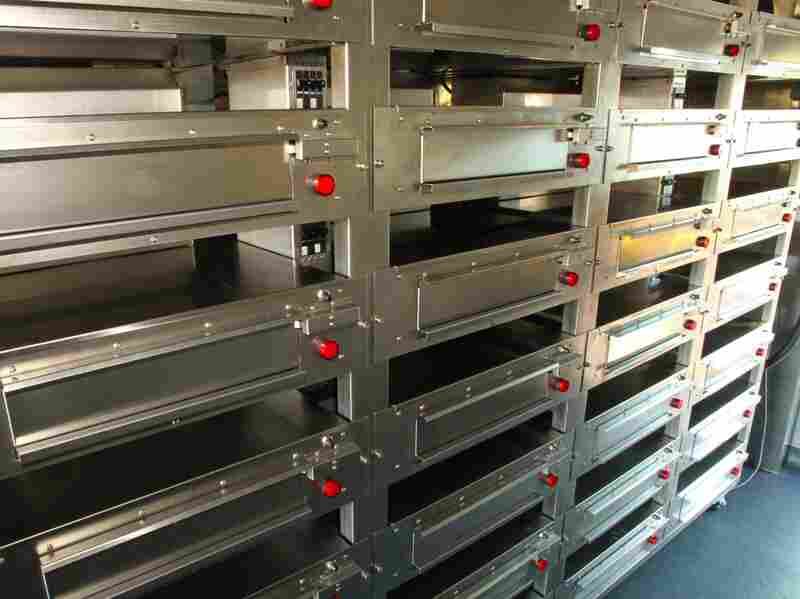 The racks lock into place so the ovens stay still while the delivery truck is being driven. Zume Pizza hide caption 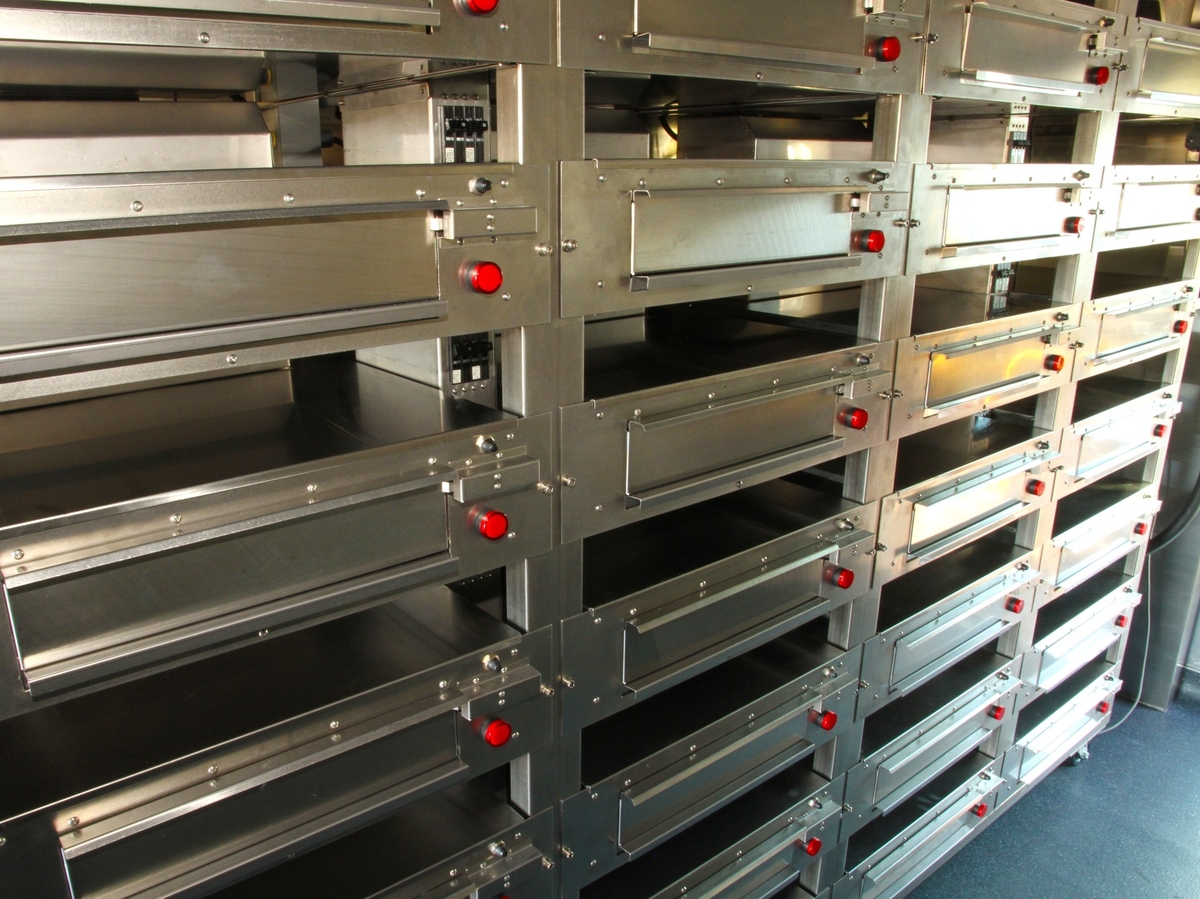 The racks lock into place so the ovens stay still while the delivery truck is being driven.

Four minutes before the truck is scheduled to arrive at a doorstep, the algorithm starts the oven (or ovens) to finish cooking that order. Each pie is then ejected into a special pizza pod, which is not cardboard. It's a sugar cane fiber, kind of like high-performance Gore-Tex, only for pizza. "We're hacking every part of the process," she says.

The driver then parks, cuts the pie with a special blade and delivers it piping hot.

Pizza is a $38 billion industry in the U.S., according to the research firm CHD Expert, and many companies are trying to disrupt it. Another startup is making a delivery box that doubles as a pipe, for weed lovers everywhere. Domino's Pizza has equipped cars with ovens, to keep pies warm, and now the company is experimenting with a self-driving car (in New Zealand).

Zume is tackling the supply-demand mismatch. When you call a mom and pop store and are told "we're backed up — it'll take an hour," you hang up and it loses your business. Because Zume is run mostly by robots, it doesn't have that problem. Off-peak or during crazy, crazy peak times, those bots are there.

"No other pizza operator can actually dynamically adjust their delivery fleet to accommodate that level of demand," Collins says.

As of this week, Zume is beginning to use its patented trucks to deliver to real customers in Mountain View. County regulators in Santa Clara gave the OK after the startup explained why it didn't need three sinks and a service window (like other food trucks have).

The money Zume makes and saves through automation, it spends, Collins says, on locally sourced ingredients.

The menu changes seasonally. One pie has poblano peppers and crimini mushrooms. Another is chicken enchilada-style.

Collins goes through a dozen or so options, and then she surprises me, by assuming what I want. Correctly.

I point out that I didn't tell her I wanted that, to which she says, laughing: "Well, I can't give myself too much credit. I think your eyes did widen" as she had read off the different menu options to me.

The sweet corn is so sweet, and enhanced by the lime zest. While I don't love the crust — it's fine, but not Brooklyn-brick-oven fine — I seem to be inhaling: three slices in five minutes.