Accessibility links
This Historian Wants You To Know The Real Story Of Southern Food : The Salt Michael Twitty wants credit given to the enslaved African-Americans who were part of Southern cuisine's creation. So he goes to places like Monticello to cook meals slaves would have eaten. 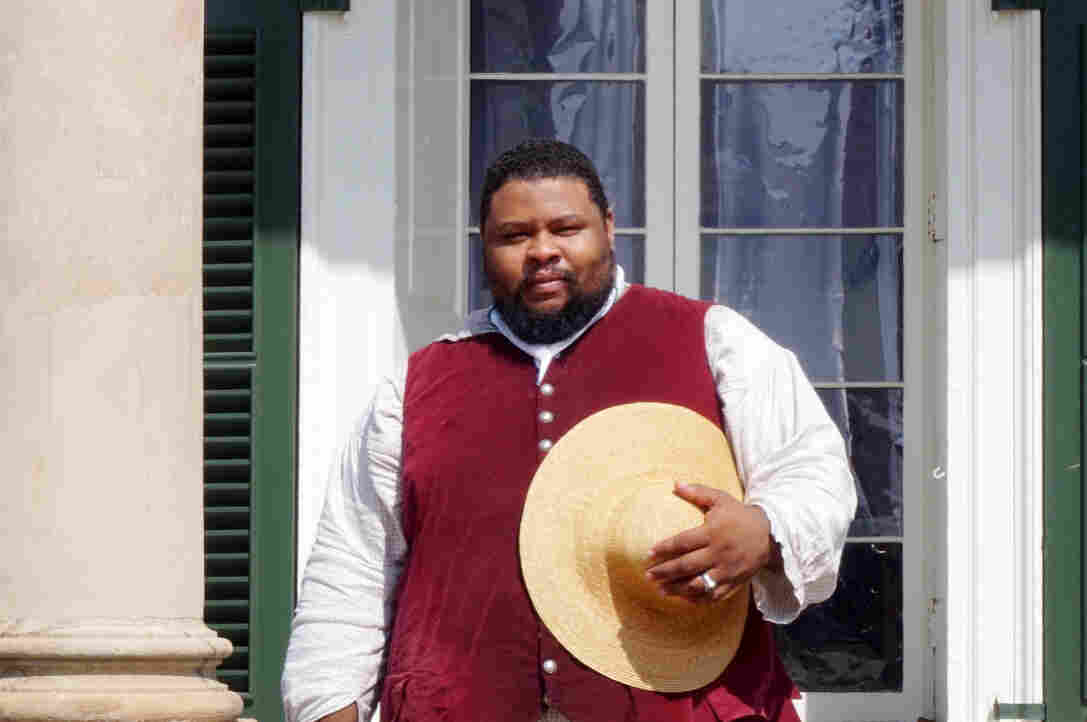 Michael Twitty wants credit given to the enslaved African-Americans who were part of Southern cuisine's creation. Here he is in period costume at Monticello, Thomas Jefferson's Virginia estate. Erika Beras for NPR hide caption 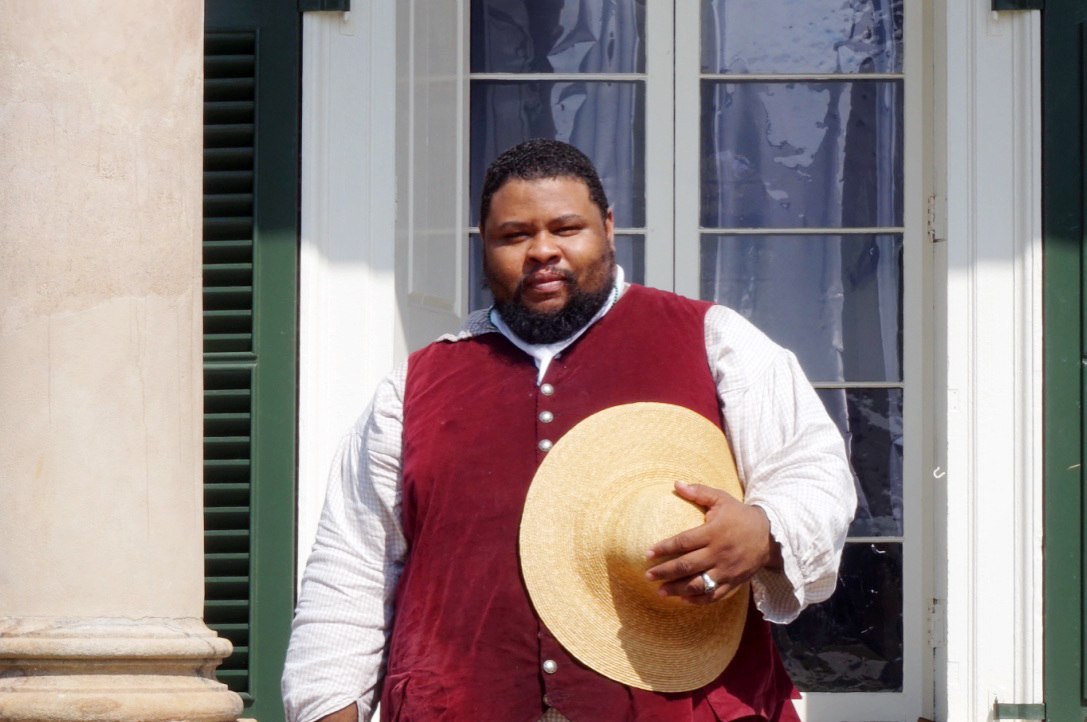 Michael Twitty wants credit given to the enslaved African-Americans who were part of Southern cuisine's creation. Here he is in period costume at Monticello, Thomas Jefferson's Virginia estate.

Michael Twitty wants you to know where Southern food really comes from. And he wants the enslaved African-Americans who were part of its creation to get credit. That's why Twitty goes to places like Monticello, Thomas Jefferson's grand estate in Charlottesville, Va. — to cook meals that slaves would have eaten and put their stories back into American history.

On a recent September morning, Twitty is standing behind a wooden table at Monticello's Mulberry Row, which was once a sort of main street just below the plantation. It's where hundreds of Jefferson's slaves once lived and worked. Dozens of people watch as Twitty prepares to grill a rabbit over an open fire.

"Look – it's better than chicken," he tells the audience.

Behind The Founding Foodie, A French-Trained Chef Bound By Slavery

Twitty is a big guy. He loves to eat, he loves history and he loves to talk. He's moving back and forth between the table and iron skillets over an open fire. His cooking instructions aren't complicated.

"The technique is, I season it, I cook it and it's done," he tells the audience, eliciting laughter. "There you go."

Today's meal is kitchen pepper rabbit, hominy and okra soup. This would have been a typical meal for an enslaved person — different versions of okra soup were eaten throughout the South, corn was a staple and rabbit would have been hunted by slaves and shared among dozens of people.

A food historian, Twitty re-creates the meals slaves would have made on plantations using 18th-century tools and ingredients – some of which we eat today. Think leafy greens and black-eyed peas. 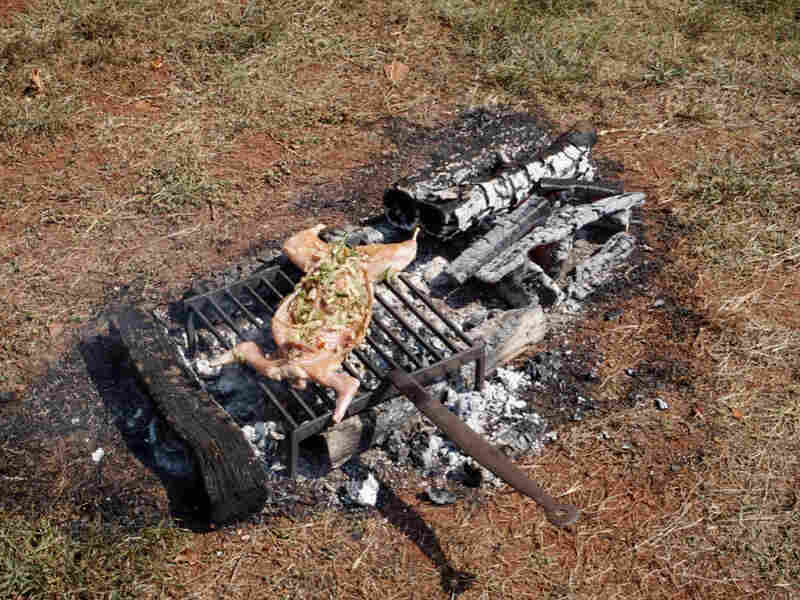 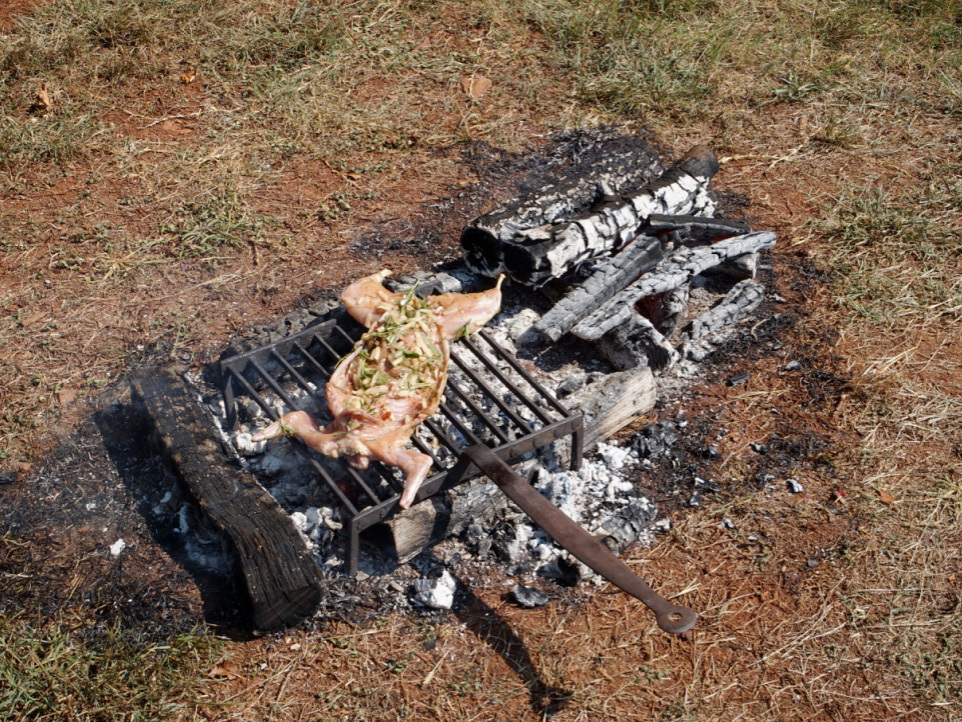 Twitty grills the peppered rabbit over an open fire.

At Monticello, his presentation is part cooking show, part history lesson. For instance, what would happen if slaves ate the master's food? "You got the present of wearing an iron mask for several weeks, until you learned that that food did not belong to you," Twitty tells the audience.

Twitty is black, Jewish and gay. He writes about all those things on his blog Afroculinaria and increasingly, in mainstream media publications. His mission is to explain where American food traditions come from, and to shed light on African-Americans' contributions to those traditions – which most historical accounts have long ignored. He says little is documented about what slaves ate. It's just a line here and a line there.

"It's really been in the past few years that people come here and they say, 'Wow – what did the slaves eat? Did they grow their own produce? Did Jefferson give them food?' "

Food offers an opening to difficult, but important, conversations. People who may not feel comfortable talking about slavery feel OK talking about sweet potatoes and ham hocks. 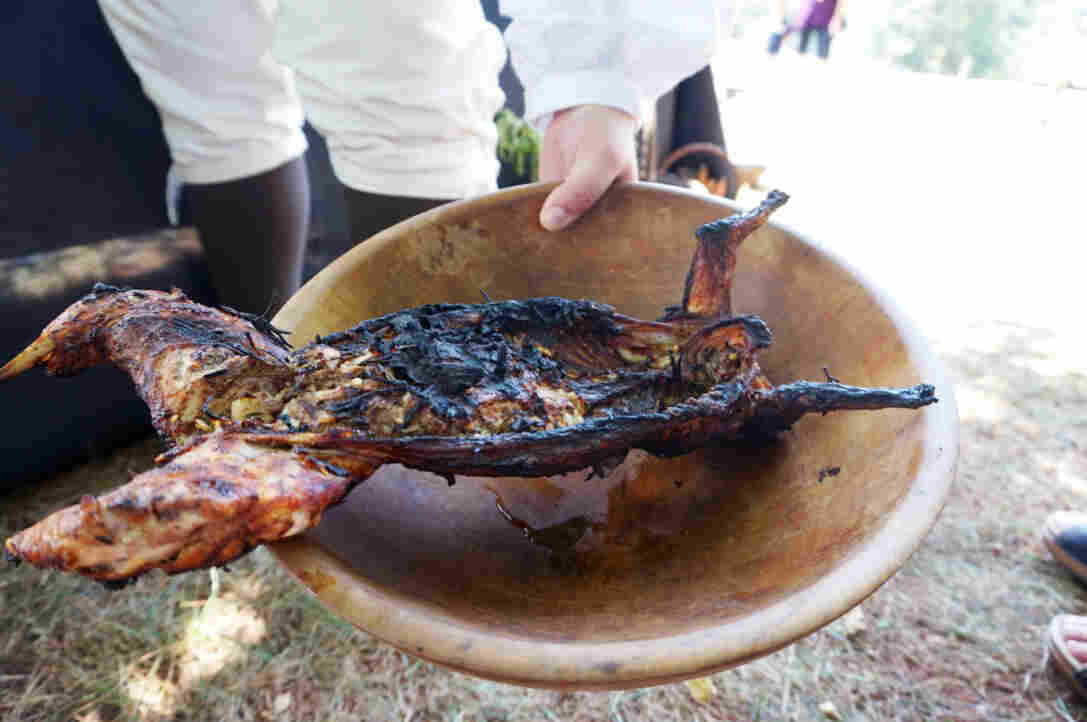 The finished rabbit, which would have been hunted by slaves and shared among dozens of people. Erika Beras for NPR hide caption 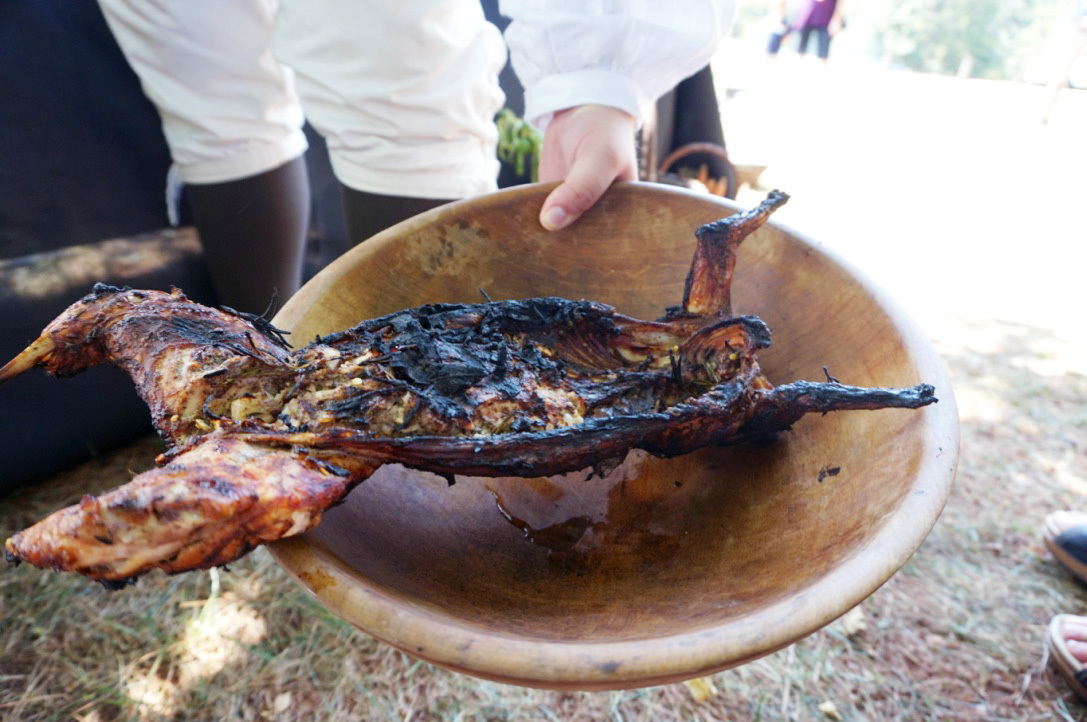 The finished rabbit, which would have been hunted by slaves and shared among dozens of people.

"Food is such a great equalizer," Dierkshede says. "And everybody has some kind of food tradition in their family. And to talk about what that tradition or culture was among the lives of African-Americans is a way for us to try to understand the lives of enslaved people in a more holistic way."

Slaves combined food from Africa with local ingredients – okra is from Africa, hominy is from the Americas. At Monticello, because of Jefferson's years in Paris, European cuisine was thrown into the mix. Macaroni pie – or, as we know it, macaroni and cheese — was popularized here by James Hemings, Jefferson's chef, who had gone with him to Paris, where he received a world-class culinary education.

Michael Twitty's visit to Monticello touched visitors like Cassandra Rockward O'Saben. She and her son, Isaac, were on a tour when they stumbled upon him.

"He made me cry when he looked me in my eyes and said, 'I wanted you to be able to bring your son here, and when you leave here, you both hold your head up because your part of American fabric. You are part of American society. You helped to build this country,' " says O'Saben, who is African-American.

Her son Isaac, age 10, chimes in: "I thought he was kind of funny. And yeah, he kind of made me laugh. But I was touched too, mom."

That's what Michael Twitty is after — affecting people emotionally and helping them see the role his ancestors played in the great American story in a new light.

But for him, reviving slave culture is also an act of defiance. He says, "It's like the equivalent, you know — I'm Jewish, so I guess I can say this – the equivalent of having a bar mitzvah at Auschwitz. You know, why not?"

In other words, he says, why not take the place where oppression was practiced and turn it into an occasion for education and celebration?