Accessibility links
Coffee! Coffee! Coffee! I Finally Got To Be A Gilmore Girl At Luke's Diner : The Salt Like many fans across America, I queued up for hours for a pop-up replica of the show's iconic diner. We were there for free coffee, but the real draw was a taste of the Gilmore Girls way of life. 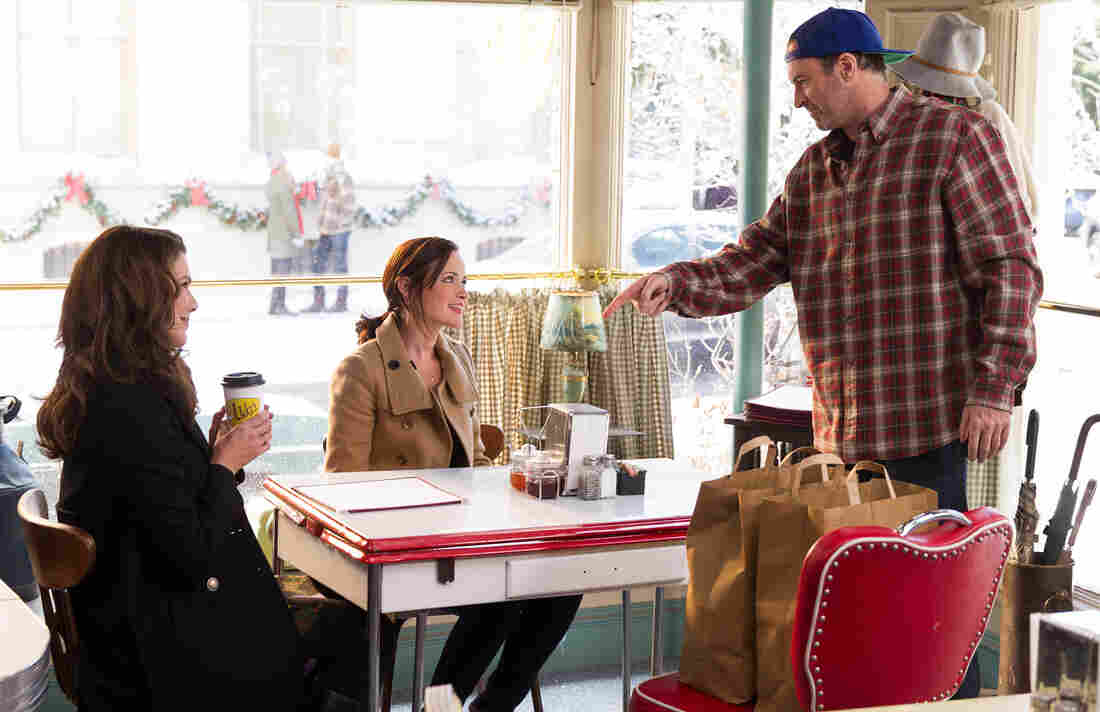 Lorelei and Rory Gilmore get a cup of joe at Luke's Diner in a scene from the show Gilmore Girls. Luke's — and coffee — were a very big part of the show. Saeed Adyani/Netflix hide caption 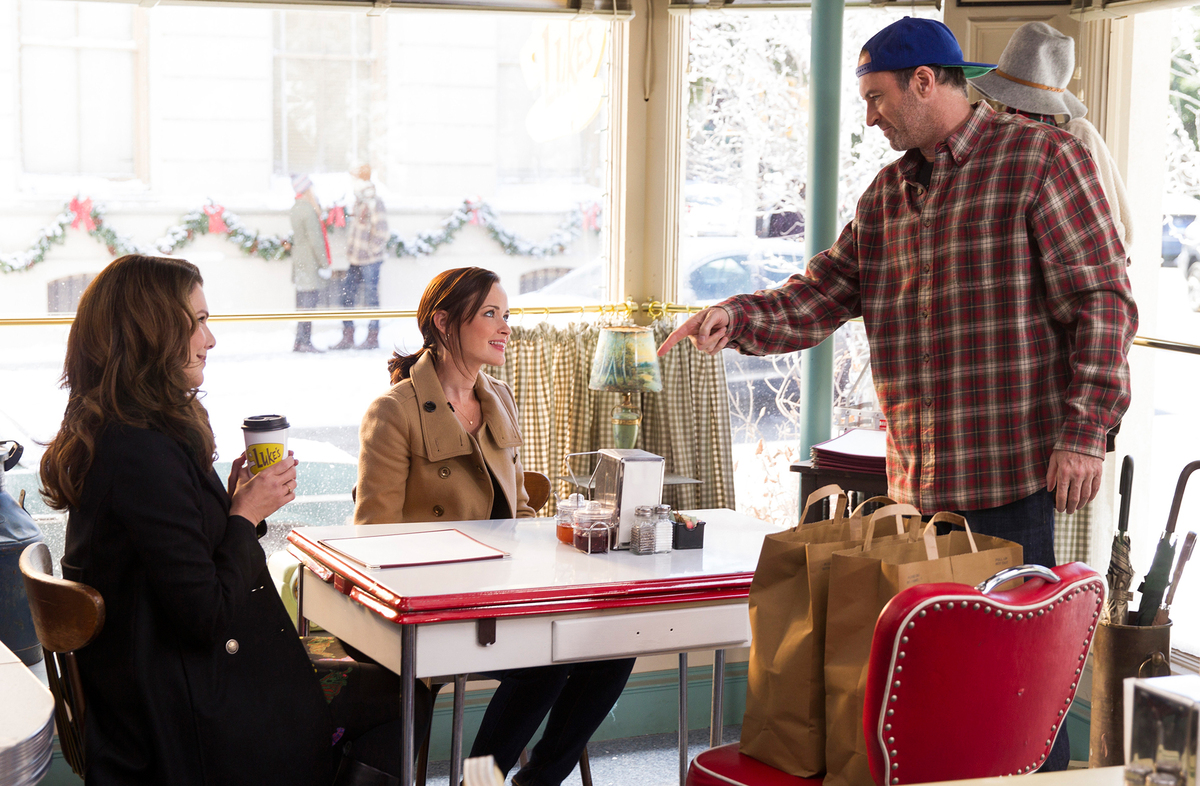 Lorelei and Rory Gilmore get a cup of joe at Luke's Diner in a scene from the show Gilmore Girls. Luke's — and coffee — were a very big part of the show.

When we finally get close enough to see the "Luke's" sign on the side of the building, a group behind me erupts into song. "Where you lead, I will follow," they belt out. The words to Carole King's 1971 single became an anthem for a whole new generation as the theme song to the Gilmore Girls.

The long-running show about Lorelei and Rory Gilmore, a mother-daughter duo with an enviably close relationship and a serious coffee addiction, hasn't aired a new episode since 2007. But its fans remain devoted, and as Netflix prepares to reboot the series for a four-part finale, it transformed some 200 coffee shops across the U.S. this week into replicas of Luke's Diner — the heart and evident headspring of coffee in Stars Hollow, the fictional Connecticut town where the show was set.

In Portland, Ore., on a wet, chilly Wednesday, I joined fans of the show to queue up for three hours in a line that snaked around nearly two full city blocks. As cars stopped to ask what we were waiting for, the women around me – and they were overwhelmingly women – answered, "free coffee." But the real allure was a taste of of the Gilmore Girls way of life. 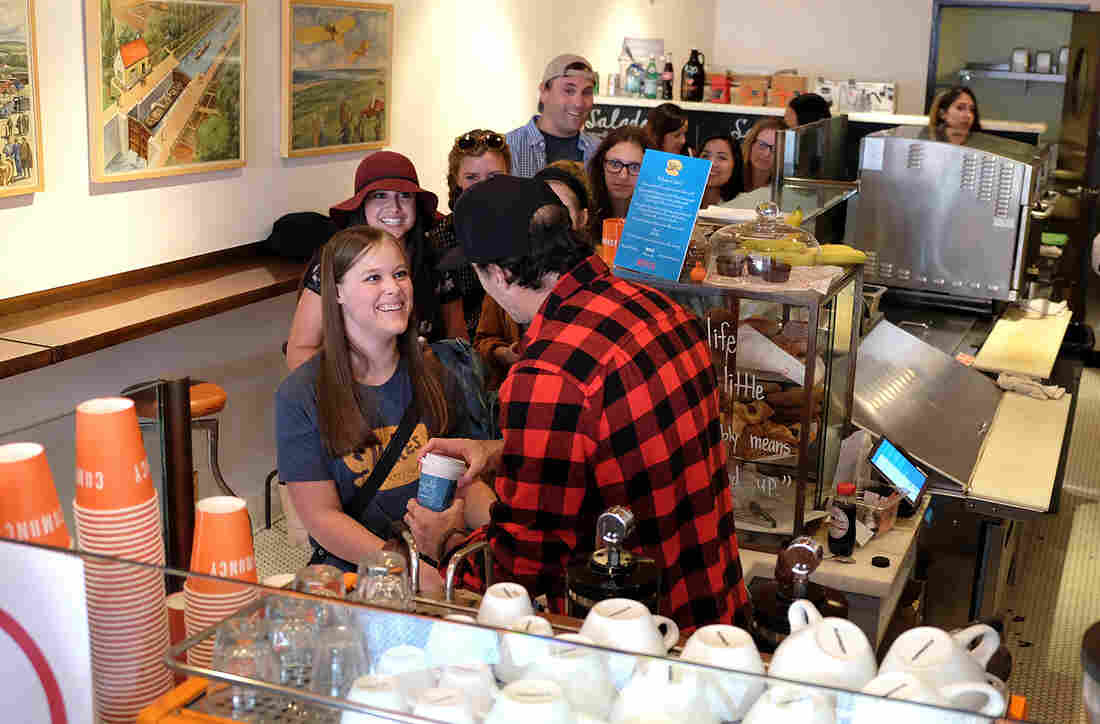 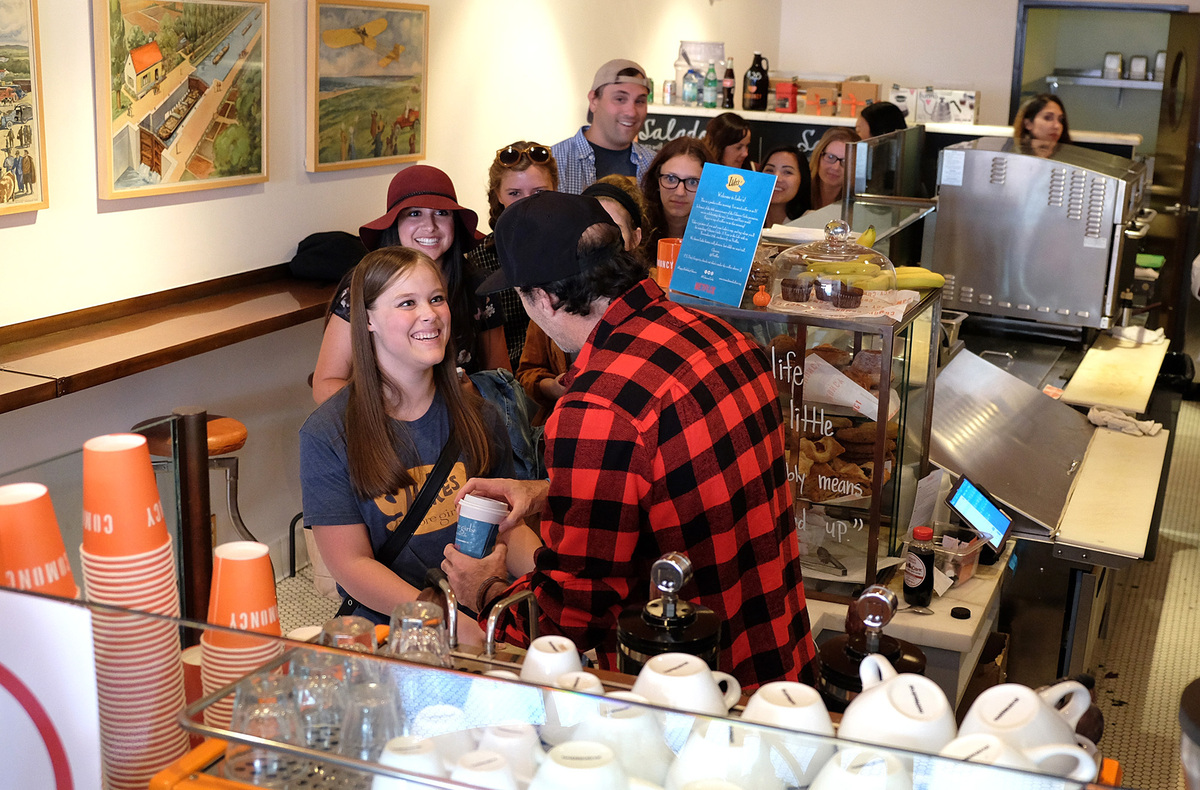 Actor Scott Patterson hands out coffee at a "Gilmore Girls" themed pop-up of Luke's Diner on Oct. 5th in Beverly Hills, Calif. Pop-ups were scheduled throughout the country.

To give the uninitiated an idea of just how big a role this diner (and coffee) plays in the show, the first and last episodes of the series both end with a shot of the main characters sitting at a table in the window, drinking coffee. It wouldn't be a stretch to say that at least once an episode, someone mentions coffee: wanting it, looking for it, drinking it. People who arrived in line as early as 5 a.m. to wait for the popup to open at 7 a.m. could relate. We should have brought a coffee to drink while waiting for free coffee.

While I didn't spot anyone wearing a school uniform, a la Rory, or a Lorelei-inspired tie-dye or rhinestone outfit, there were plenty of women dressed in flannel and backward baseball caps ala diner-owner Luke Danes — the easiest way to have a costume while keeping warm. Behind me, a woman waited with her 4-year-old daughter, Lorelai, for over two hours before they had to leave for ballet class. (Yes, the name was inspired by the show.) Most people come in groups — mother-daughter pairs or college-aged friends who seem to see waiting in line as a bonding experience, much like watching the show together.

Taylor Ellis, 23, had been in line with two other friends until they had to leave to go to work. She waited out the last two hours of the line by herself. As we reached the door, I asked if she thought the wait would be worth it. "At this point I'm so cold that I'm just excited to get inside and have a warm drink," she says. Ellis has been "watching the show since I was a kid with my mom and cousins." When it was still on television, they'd get together and watch it once a week. "Once it came out on DVD, my cousin and I would sit on the couch and watch episode after episode for hours."

"Good donut selection this morning, really. Good variety, good color, good goodness, good. Well, so the choices are there. It all comes down to what I'm in the mood for. Sprinkled or chocolate or jelly or glazed, maple or kiki or apple or, raised. Little donut rhyme there. Never mind. Can I have a chocolate and a sprinkled please?" #lukesdiner #oywiththepoodlesalready

Ellis says that the mother-daughter relationship is her favorite part of the show and is, in fact, what the Gilmore Girls is about. Most people in line have a similar story. They used to watch it with their mother or sister, or now rewatch episodes with a young daughter. Many, like Ellis, have close relationships with their moms.

I, too, watched Gilmore Girls with my mother all through middle school and part of high school. For us, the show was like an episodic vision board for our relationship: It was one of the few activities we could do together without fighting. Like Lorelei, she was for many years a single parent who put me through private school – but without the help of rich grandparents waiting in the wings. But we didn't have inside jokes or witty banter. While I was standing in line alone for hours, the time when I truly loved this show seemed far away. Watching it as a teenager, I hoped that someday my mother and I could be like Lorelai and Rory. Now, a few years from my thirties, it's just another dream that never panned out in real life.

While the Luke's popups provided ample Instagram fodder, they were missing something. (And it's not just because the Oregon popup wasn't one of the locations chosen to host a cardboard cut-out of Luke.) The baristas were dressed in Luke's Diner aprons and backwards baseball caps. Luke's memorable "no cell phones" sign was taped to the door. But the Luke's of Stars Hollow is a neighborhood spot antithetical to the pop-up by its very nature. 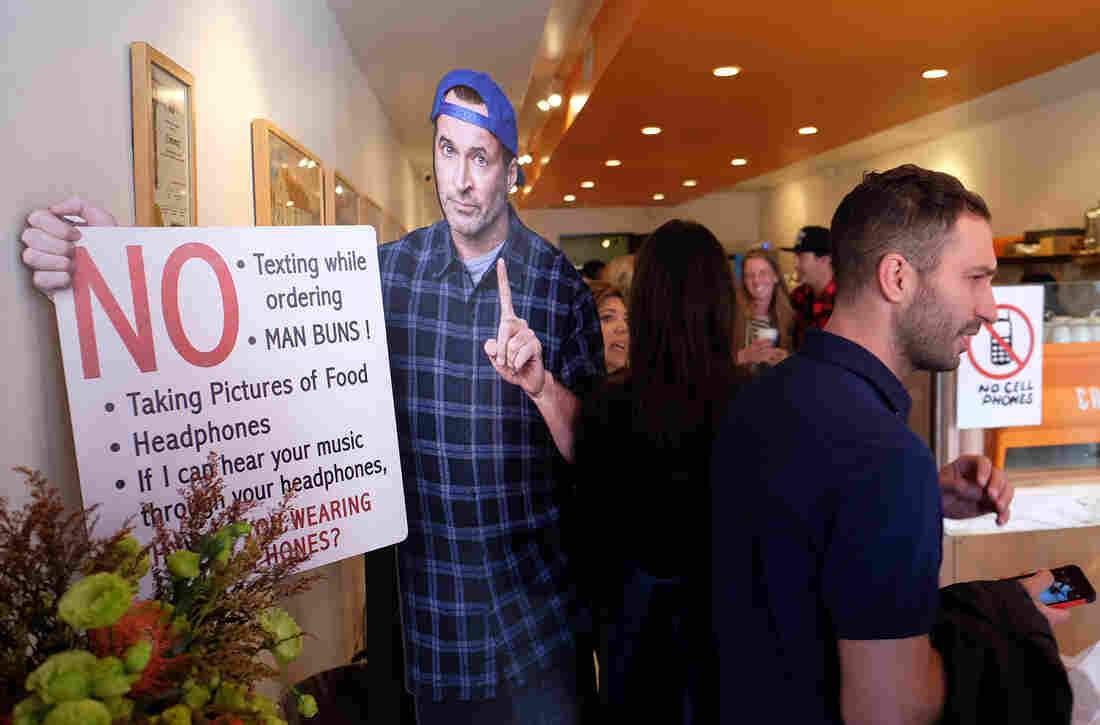 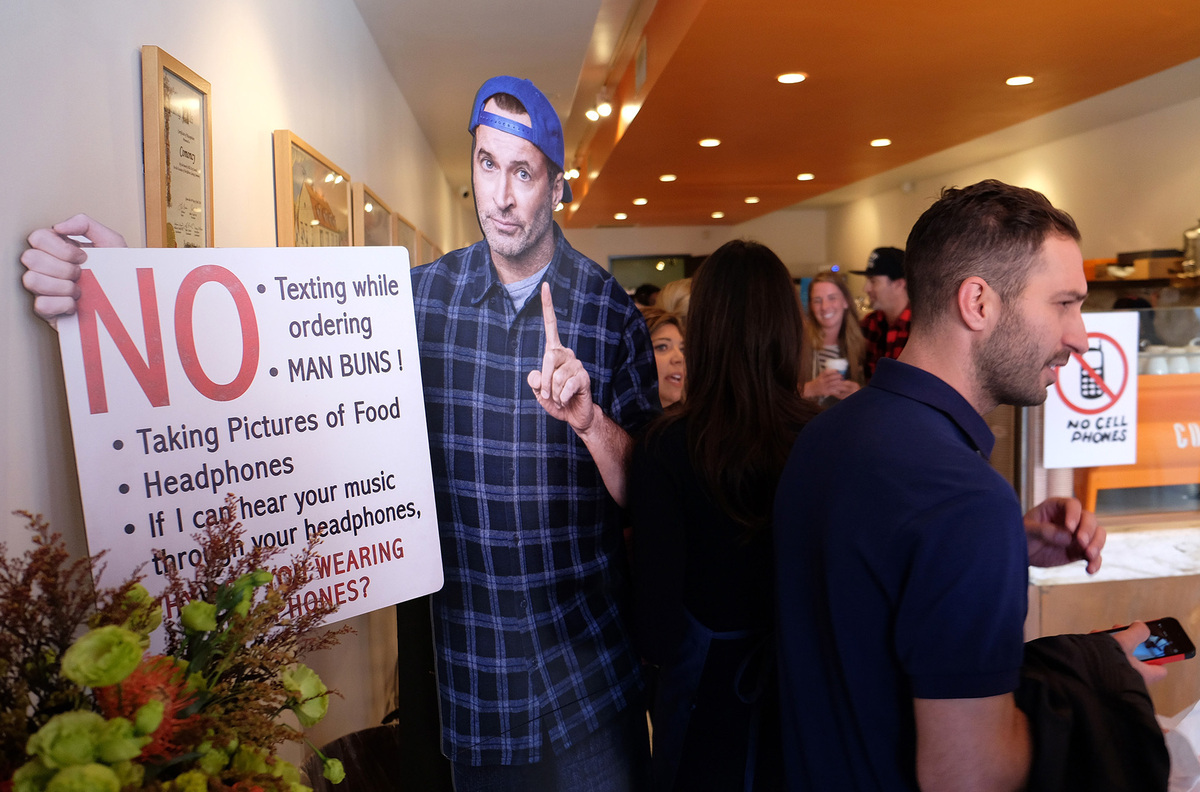 A cardboard cut-out at a pop-up of Luke's Diner in Beverly Hills, Calif.

Rory and Lorelai had a coffee pot at home, yet they walked over to demand coffee and sometimes breakfast from perma-grumpy Luke Danes seemingly every day. Sure, they said the coffee was the best in town, but the reason Luke's Diner was the heart of Stars Hollow is because it was a place where the Gilmores could start the day with the neighbors and friends they loved.

Years ago, when I worked in a restaurant, breakfast was the worst shift in many ways. You had to wake up early, made less money, and had a lot of downtime to stare out the window or surreptitiously catch up on reading behind the bar. Its one good quality was that it was when the regulars — the ones whose orders you knew without asking — came to dine. One couple would sit at the same table every Monday and Wednesday, sharing a newspaper; one ordered toast with an over-easy egg, the other, an omelette. Another man liked to sit at the bar and do the crossword puzzle. Eventually, he started saving them for me and the other staff to help him out. I looked forward to these customers coming in every day and noticed when they weren't there.

Many of us, especially those in cities, are alone during a large portion of our days. We're at offices hoping someone will notice us or our work; hoping we'll make friends over lunches that happen more infrequently, replaced by the solitary so-called "sad desk lunch." We're looking for love on the Internet, ordering delivery sushi for dinner. Everyone wishes they had a Luke's — a place to be greeted first thing in the morning, where we know the staff well enough to not always be on our best behavior.

And maybe that's why, despite the cold and the rain, and the fact that the coffee shop was out of "free coffee" by the time I got to the front, none of the people around me seemed cranky or mad. Even the shop's owner said there had only been "two bad apples" out of the 40-plus coffee urns worth of people he'd served that day.

Maybe we all believed some part of Gilmore Girls was still out there, waiting for us in the real world: in the relationships we want to have with our mothers or our children, in a restaurant where we can go to feel connected, in a pop-up that gave us an excuse to spend three hours with friends, even though all we got out of it were some selfies and a blue-and-yellow coffee sleeve that said "Luke's" on the front.