Accessibility links
Across The Globe, Our Diets Are Making Us Sicker, Report Finds : The Salt The good news: fewer hungry people around the world. The bad news: Increased consumption of processed foods is pushing up global rates of overweight and obesity. 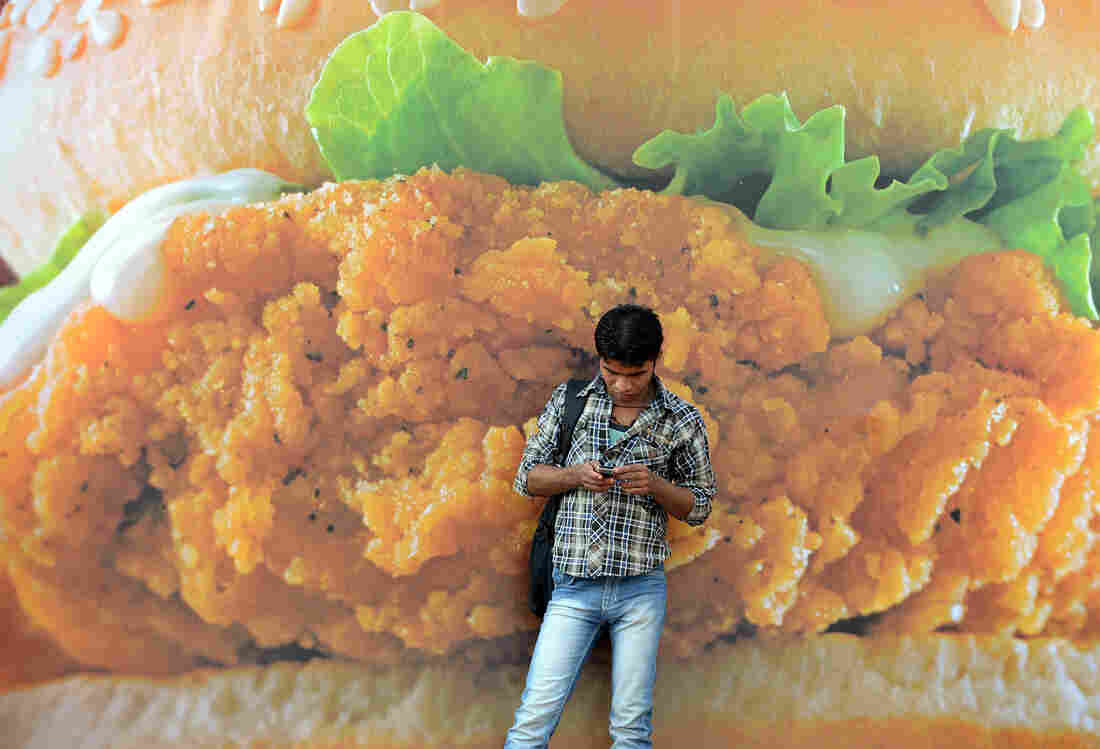 An Indian pedestrian checks his mobile phone in front of an advertisement for a burger of a fast-food giant in Mumbai, India. Fast food and highly processed foods and sodas are increasingly becoming more popular around the world, one of the main reasons for increasing rates of overweight and obesity. Indranil Mukherjee/AFP/Getty Images hide caption 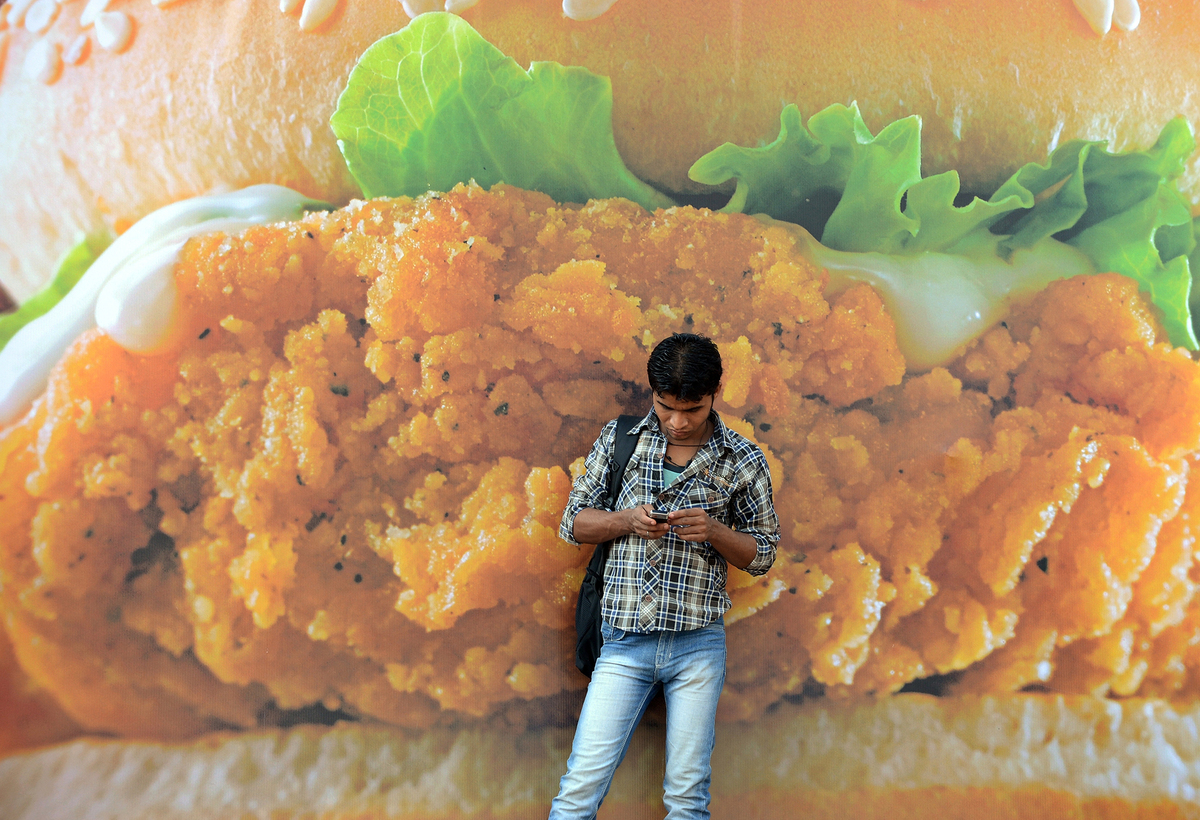 An Indian pedestrian checks his mobile phone in front of an advertisement for a burger of a fast-food giant in Mumbai, India. Fast food and highly processed foods and sodas are increasingly becoming more popular around the world, one of the main reasons for increasing rates of overweight and obesity.

Diet and nutrition are now the biggest risk factors for people's health across the globe, even in poorer countries. That's according to a recent report published by the Global Panel on Agriculture and Food Systems Nutrition, an independent group of experts on nutrition and health.

"If you look at all the diet-related risk factors for health, they outweigh the burden of all of the other risk factors combined," says Lawrence Haddad, an author on the report and formerly, a senior fellow with the International Food Policy Research Institute. The other risk factors include unsafe sex, alcohol, drug and tobacco use.

The report, which uses some recent data on what people around the world are eating, offers some good news, too. We have fewer hungry people in the world now than a couple of decades ago – only one in 10 people, as opposed to about one in five in 1990. And the number of stunted (a sign of chronic malnutrition) children has decreased from 39.6 percent to 23.8 percent. That means fewer people suffering and dying from insufficient food. This has been possible because of targeted projects to tackle hunger, as well as overall reductions in poverty, better education, improved health care and sanitation.

As poorer countries have developed over the past couple of decades, many aspects of life in those countries have gotten better, says Haddad, who is now the executive director of the Global Alliance for Improved Nutrition, a non-governmental organization. "More kids go to school, more clean water and sanitation," he says. But diet doesn't necessarily get better with higher incomes. Yes, people eat more healthy foods when they earn more money – for example, milk, fruits and seafood. But their consumption of unhealthy foods – processed foods and sugary drinks – increases much more with rising incomes, according to the report. "These kinds of things, they have very high concentrations of calories," says Haddad.

In fact, the sale of processed foods is growing at the fastest rate in developing countries, the report finds. "Income is sort of a double-edged sword. It allows us to buy healthy stuff and also unhealthy stuff," says Haddad.

What follows is a concomitant rise in the rates of diet-related health problems. For example, in Nigeria, the number of adults with diabetes is projected to double between 2011 and 2030, from 3.1 million to 6.1 million. Countries like Nigeria are simultaneously facing the burden of hunger, malnutrition, infectious disease, as well as these diet-related, non-communicable diseases that are expensive to treat. The report estimates an annual loss of 10 percent of global GDP from diet-related illnesses. "Wake up, world!" says Haddad. "Our diet is not killing us, but it's making us sick." 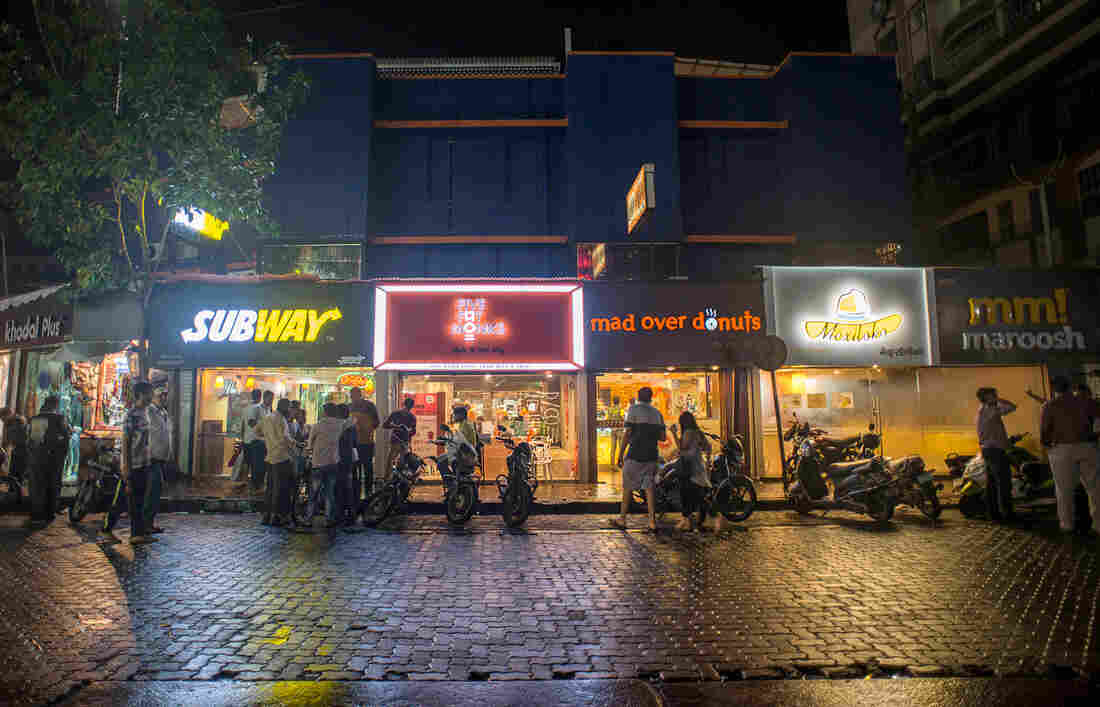 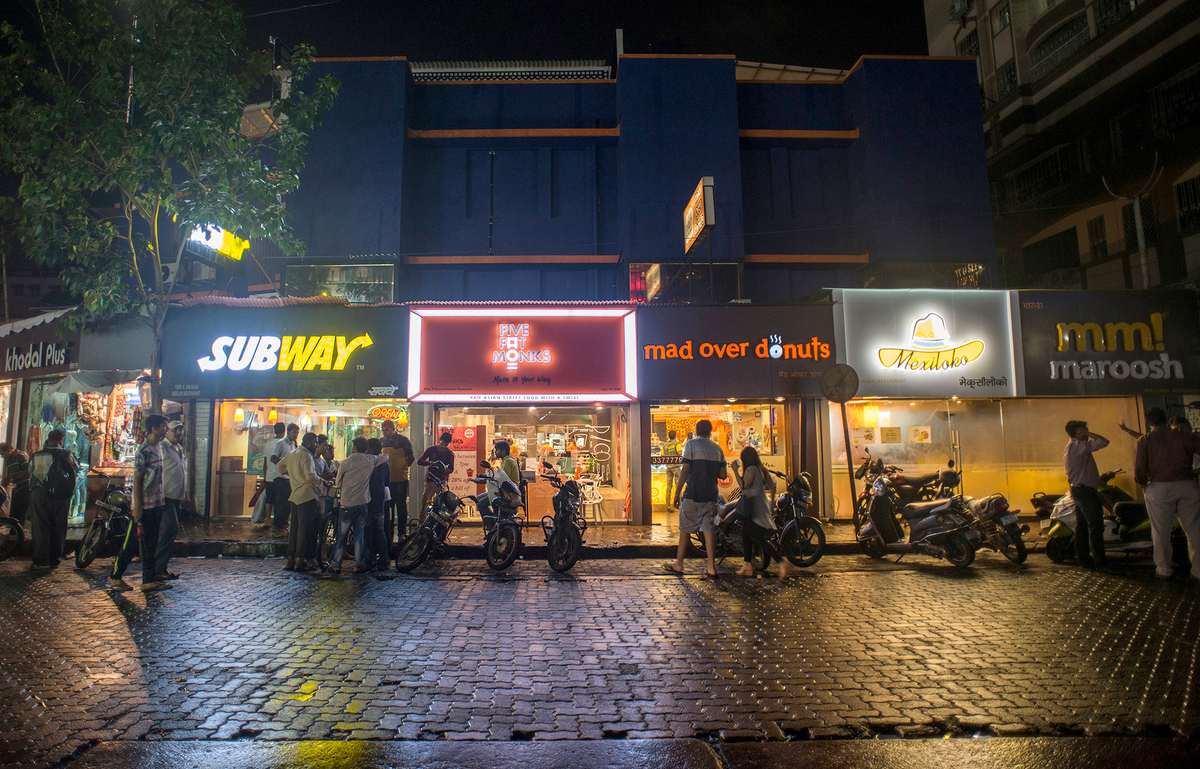 These changes are happening even in remote and poor corners of the globe, says Jessica Fanzo, a nutrition and diet expert at Johns Hopkins University, who wasn't involved in the report. On a recent trip to Kenya, Fanzo visited a remote place in the northeastern part of the country called Gotu, where food and water are scarce. Local communities are mostly pastoralists who rely on food being shipped in on bad roads from a nearby town called Isiolo. Pulses, fruits and vegetables are difficult to find, says Fanzo, but "you can get soda there." "It's warm soda, but it's soda!"

Globalization has changed food environments in most countries, according to the report, allowing many multinational food companies selling processed foods to enter developing country markets. And rapid urbanization is also playing a role.

On the one hand, farmers in many countries are giving up farming and moving to cities. "Who's going to feed us, and feed us well?" says Fanzo.

On the other hand, people moving to cities are increasingly turning to street food or processed food, because they don't have time and they want to save money. "If you're a person holding down two or three jobs and you don't take a lot of time, it makes sense," says Fanzo. And that's where food industries are stepping in and catering to the three things that consumers look for – "taste, price and convenience," she says. "They try to satisfy those primary reasons for choice."

"One of the problems is that there are lots of solutions, but they are not being enacted," Haddad says. Most developing countries are still dealing with basic challenges like water and sanitation, he adds. "Maybe there's a lack of realization of the magnitude of the problem or lack of appreciation that you can do something about it."

That's where the new report can help, he says, because it offers concrete solutions to make it easier for people to buy healthy food. For example, countries should invest more money into research on and development of crops like pulses, vegetables and fruits (instead of all the funding that goes into growing stapes like rice, wheat and corn). "Vegetable consumption has been flat for the past 20 years," notes Haddad. "Pulse consumption has been flat." That's because the prices of vegetables and pulses have gone up in recent years. More funds and subsidies on these crops would help lower prices, and encourage people to eat more of these healthy foods, he says. 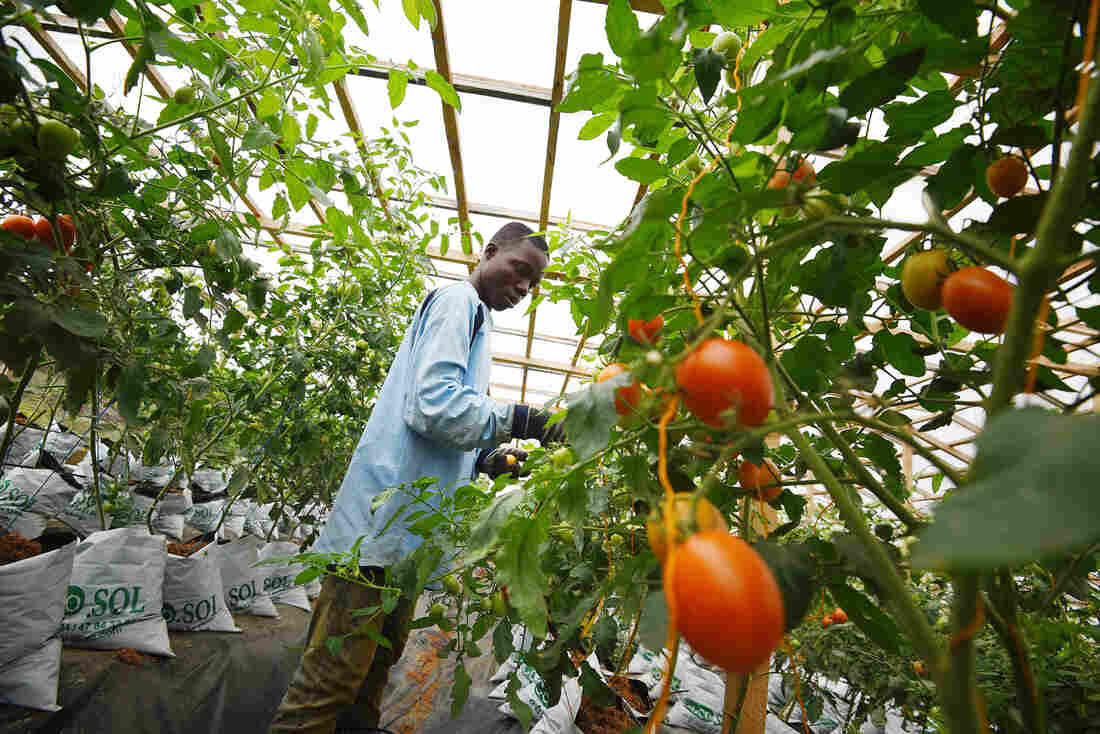 A man works in a hydroponic tomato farm in Bingerville, Côte d'Ivoire. According to a new report, governments should help make fruits and vegetables more affordable, so people are more likely to eat them. Sia Kambou/AFP/Getty Images hide caption 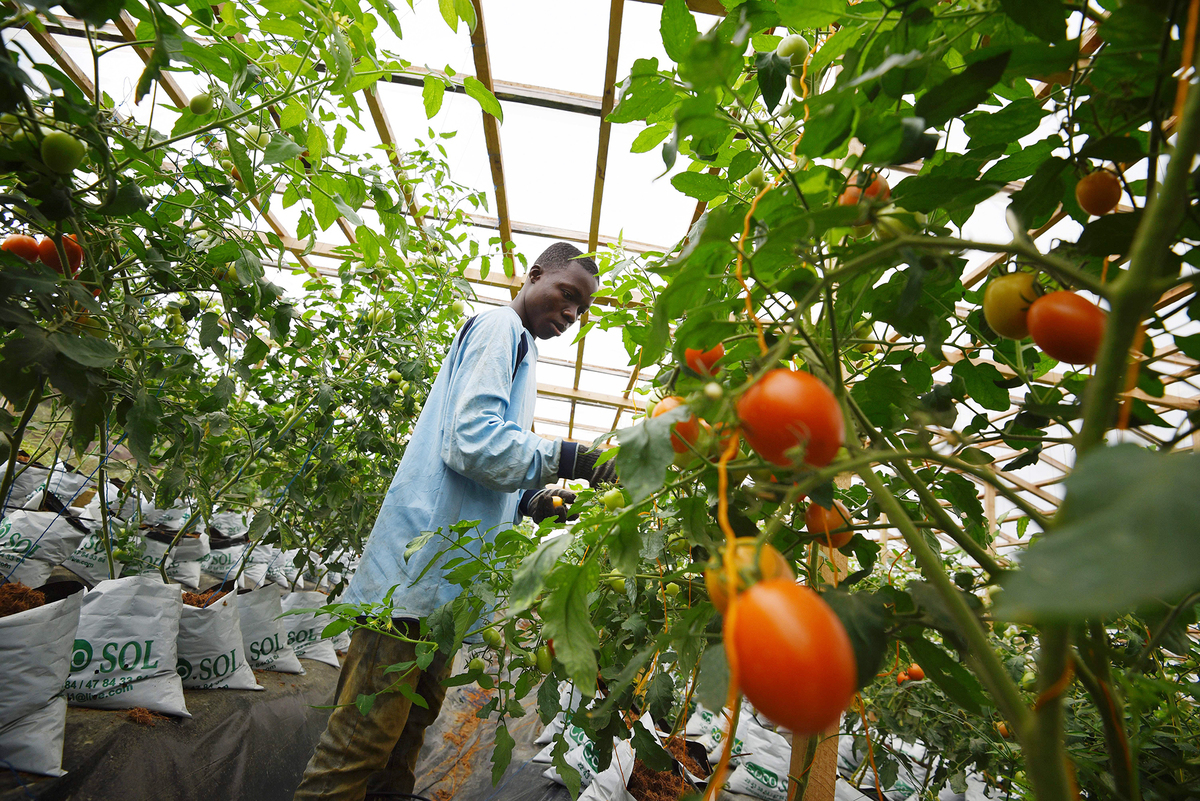 A man works in a hydroponic tomato farm in Bingerville, Côte d'Ivoire. According to a new report, governments should help make fruits and vegetables more affordable, so people are more likely to eat them.

The burden of solving the planet's diet problems doesn't just fall on the shoulders of consumers, says Fanzo. "It's also on governments." And governments will benefit from the solutions offered by the new report, she says. But "we'll need lots of different solutions contextualized at the local level," she cautions. That's because every place has its food traditions, and while there are similarities, there are also differences between the drivers of bad diet in parts of the world. "It's a complex problem," she says. "And it's not a quick fix."