Accessibility links
African-American Museum Cafe Serves Up Black History With Every Forkful : The Salt The restaurant inside the new National Museum of African American History and Culture offers a menu designed to showcase the breadth of black contributions to our nation's cuisine.

The idea is to expand people's understanding of just how much African-Americans have contributed to our nation's culinary heritage, says Joanne Hyppolite, curator for the cultural expressions exhibits that feature foodways, culture and cuisine.

"People think that African-Americans only created soul food," Hyppolite says. But in fact, she says, black folks "had a long presence in kitchens all over the United States — whether that was in a railroad car, on ranches in the West, in wealthy people's homes throughout the North and plantations to the South. They were there contributing to all types of American cuisine."

Hyppolite meets me for lunch at Sweet Home Cafe. She orders from the North States — pan-roasted oysters served in a rich red sauce that starts with shallots and butter, deglazed with white wine and reduced with chili sauce and cream. The dish was inspired by Thomas Downing — the son of freed slaves who became known as the "oyster king of New York." Downing used his basement as a stop in the Underground Railroad. 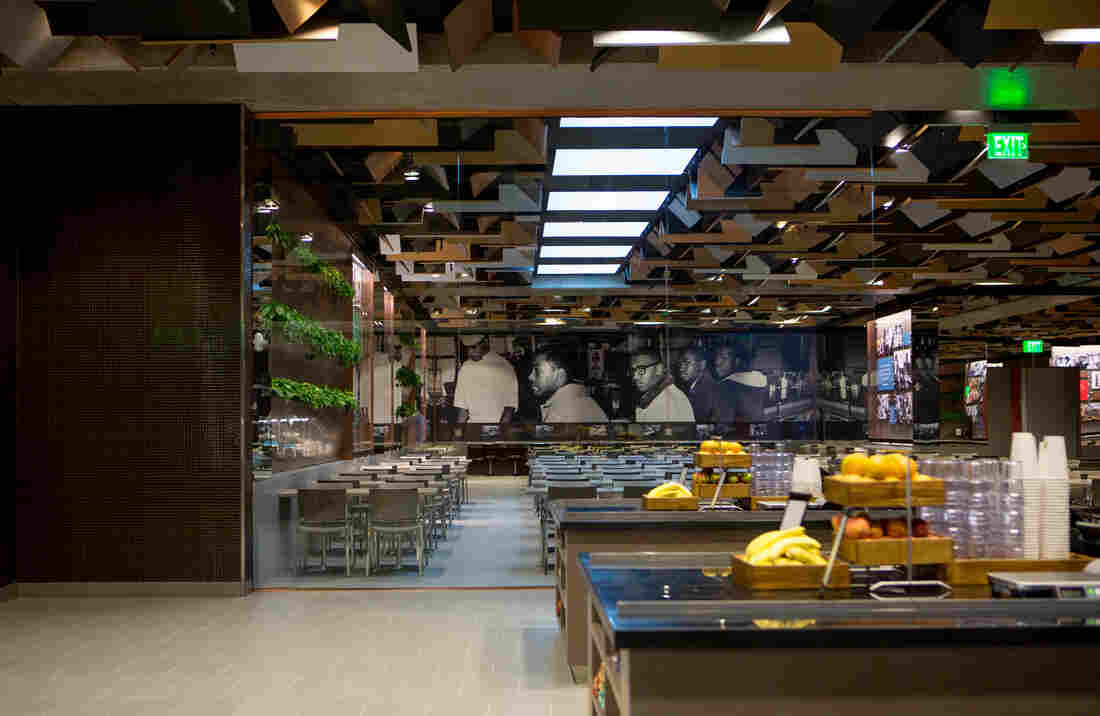 Sweet Home Cafe's dining area feels like a gallery. Images and words that tell of African-Americans' relationship with food surround you. A black-and-white photograph covers an entire wall. The subject: the Greensboro Four, sitting in protest of segregation at a Woolworth's lunch counter in 1960. Ariel Zambelich/NPR hide caption

At the Agricultural South station, Shari Hills and Keena Lewis, both young residents of Washington, D.C., who originally hail from the South, choose the fried chicken and mac 'n' cheese — which Hills calls "the bomb." When asked how the food compares to what they've had back home, the two laugh. "Back home, it's probably a little more salt-seasoned," Hills says with a giggle.

The Creole Coast serves up dishes like duck, andouille sausage and crawfish gumbo. Visiting from Durham, N.C., Marie Shaw Simmons has a taste for the catfish po' boy and watermelon and tomato salad. "Isn't it beautiful?" Simmons says. "It reminds me of home."

Her friend, Anita Neville, who also got the catfish, takes a picture to send to her sister so that "she can be a little envious ... and also glad for me."

In the Western Range station, many dishes have Native American and Mexican influences, such as barbecued buffalo brisket and black-eyed peas empanadas. After the Civil War, many freed slaves moved West to take up jobs as ranch hands and cowboys. In cattle country, beef replaced pork in their cooking. "Son of a Gun Stew" — traditionally made with innards — gets a modern twist with braised short beef, turnips, tomato, potato, leeks and sun-dried tomato.

"First of all, I don't totally know what's on my plate," Bushkin tells me. (It was loaded with fried chicken, collards and a Gullah-style version of the rice and beans dish known as Hoppin' John.) "We don't recognize the names, but you can't go wrong. It's just very different and very wonderful," he says.

It took about two years for a committee of curators, chefs and historians to decide on the cafe concept, design and menu. Jessica Harris, culinary historian and author, led the project. After looking at the success of the Mitsitam Cafe at the National Museum of the American Indian, the first in the Smithsonian family to turn a cafeteria into a history lesson, Harris became the force behind the regional sections at Sweet Home Cafe. 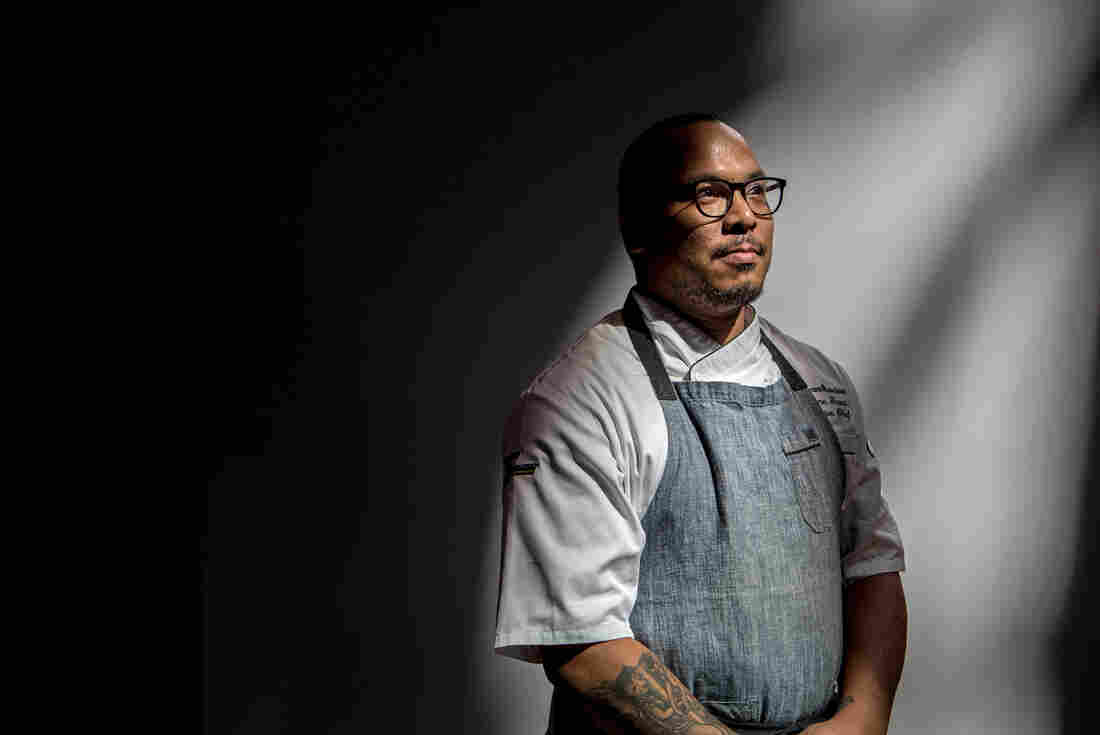 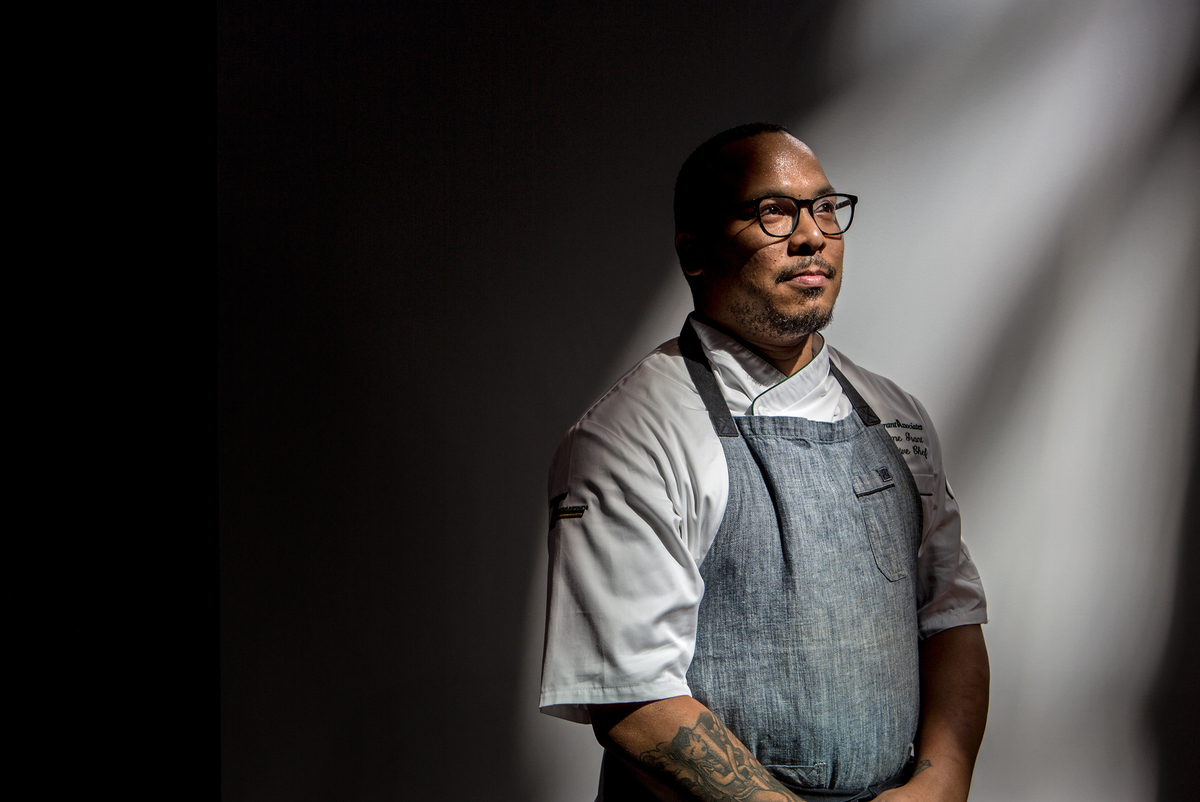 Supervising chef Albert Lukas of Restaurant Associates, another Smithsonian partner in food services, traveled to places like South Carolina to dig into Southern cooking. Executive chef Jerome Grant, who previously ran the Mitsitam Cafe, hung out with his chef friends in New York to see how they put their twists on classic dishes.

Sweet Home Cafe's dining area feels like a gallery. Images and words that tell of African-Americans' relationship with food surround you. A black-and-white photograph covers an entire wall. The subject: the Greensboro Four, sitting in protest of segregation at a Woolworth's lunch counter in 1960.

"I'm really the person who gets people excited," Hall says while on break from her daily shoot at ABC's The Chew.

She says she wants people to talk about their museum experience in the cafe as if they're "around the kitchen table at home, where you feel comfortable and safe as a family."

Leon Hill and Tori Richardson-Hill of Minnesota did just that. "We talked about the eating experience of black people or people of color," Richardson-Hill says. At the table were her two adult children, both college students who'd joined their family for this museum visit. "This was a very smart move on the museum's part to have this as part of the museum experience."