Accessibility links
Coffee And Climate Change: In Brazil, A Disaster Is Brewing : The Salt Climate change is threatening the world's coffee, a new report says. In the biggest coffee supplier on the planet, Brazil, rising temperatures are being felt to devastating effect. 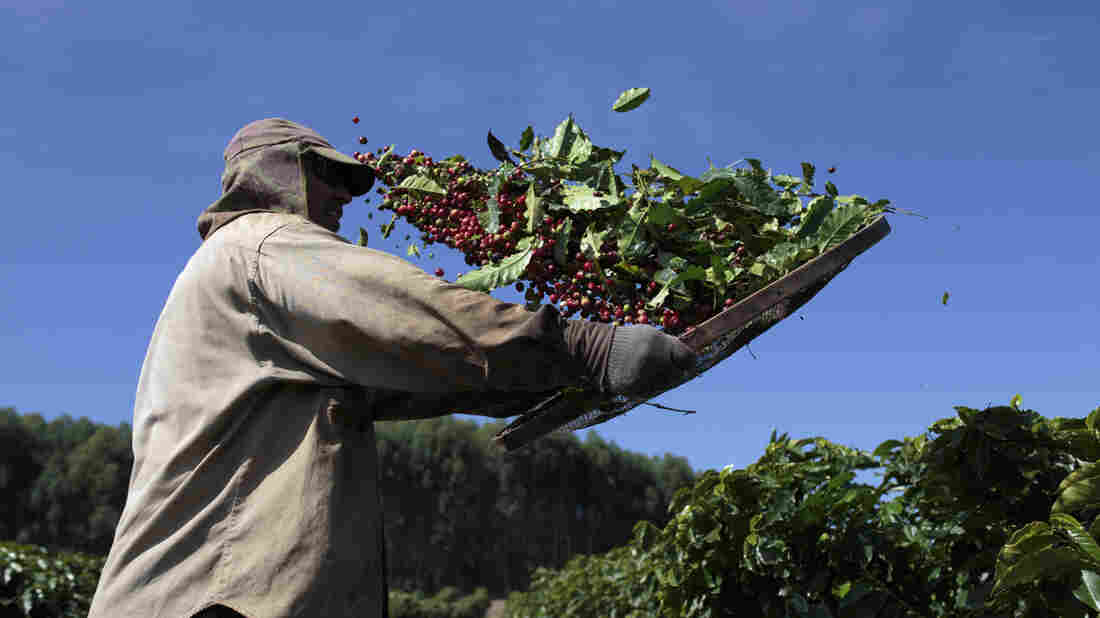 A worker separates coffee cherries during harvest at a plantation in Brazil's Minas Gerais state. Brazil's coffee exports fell to 2.6 million bags in June, a 12 percent drop from a year ago, according to a report last week by Cecafe, the country's coffee export council. Patricia Monteiro/Bloomberg via Getty Images hide caption

Coffee lovers, alert! A new report says that the world's coffee supply may be in danger owing to climate change. In the world's biggest coffee-producing nation, Brazil, the effects of warming temperatures are already being felt in some communities.

You can see the effects in places like Naygney Assu's farm, tucked on a quiet hillside in Espirito Santo state in eastern Brazil. Walking over his coffee field is a noisy experience, because it's desiccated. The leaves from the plants are curled up all over the floor, in rust-colored piles. The plants themselves are completely denuded.

"We've had no rain since last December," Assu tells me in Portuguese, "and my well dried up. There was nothing we can do, except wait for rain."

But the rain doesn't come.

In fact, it's been three years of drought here in Sao Gabriel da Palha. This region is part of Brazil's coffee belt. Farmers here have been growing robusta — a coffee bean used in espressos and instant coffee — since the 1950s. Assu says he doesn't know what to do.

He's lost 90 percent of his coffee crop. And he is not the only one. Production of robusta this year is down 30 percent in the state.

"Coffee depends on a lot of water," says Perseu Perdoná, an agronomist with the local coffee cooperative. And coffee plants are already sensitive to temperature. "Climate change is happening," he tells me, "we can see it. Add to that deforestation, which means the ground can't retain water when it rains."

He fears that in the near future, unless something drastically changes, coffee will disappear from this region.

"This is affecting the production of robusta," he tells me. 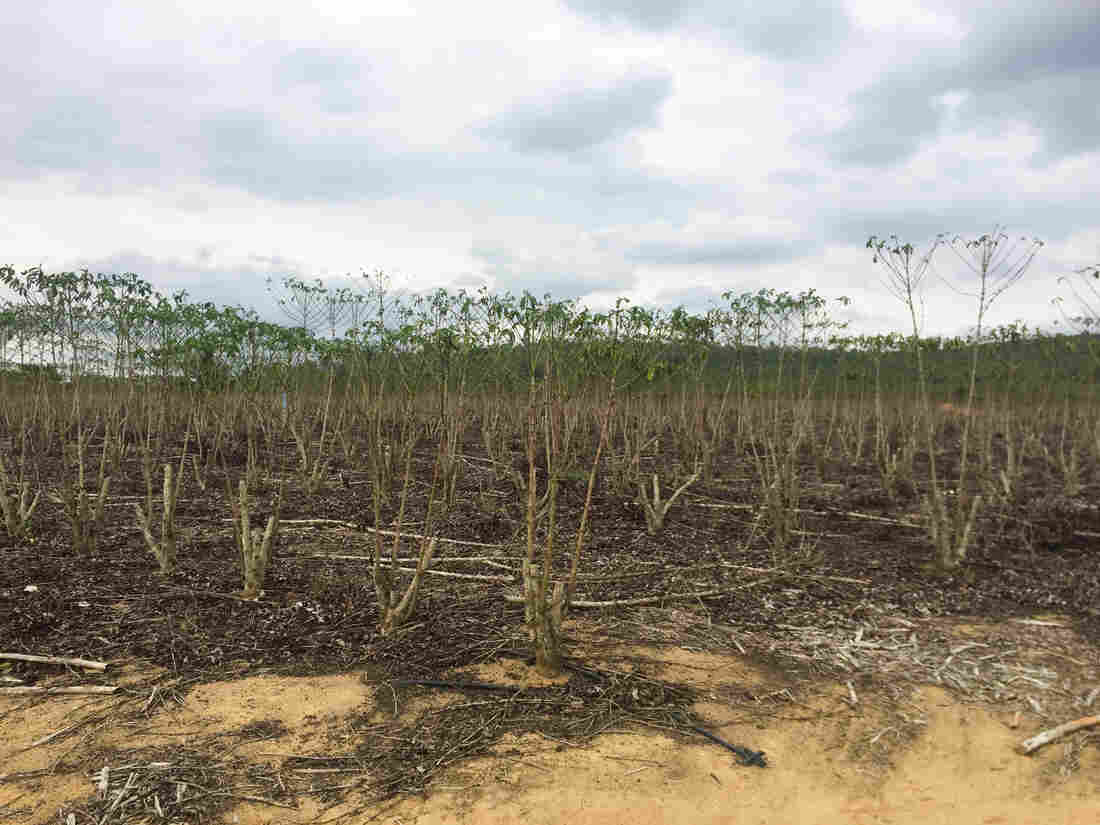 Naygney Assu's farm in Espirito Santo state in eastern Brazil has suffered from years of droughts. "We've had no rain since last December," says Assu. "And my well dried up. There was nothing we can do, except wait for rain." Lourdes Garcia-Navarro/NPR hide caption

But it's not just robusta. A new report from Australia's Climate Institute says coffee production worldwide is in danger because of climate change. It cites a study that says "hotter weather and changes in rainfall patterns are projected to cut the area suitable for coffee in half by 2050."

This could have a dramatic impact on the communities that depend on coffee production. Perdona tells me families are already going hungry in Sao Gabriel da Palha.

At the headquarters of the local coffee cooperative I am offered, naturally, a cup of coffee made from the beans of local producers.

Antonio Joaquim de Souza Neto, president of Cooabriel, tells me his family has long roots in the area and this is the worst drought in at least 80 years — basically, since anyone alive can remember.

He brings out the records of 17 years of rainfall in the region. He says it used to rain on average 1,300 millimeters (51 inches) a year; in the last three years, that number has plunged to just over 400 mm (15.7 inches) a year.

He says he went to the capital, Brasilia, to ask for help from the federal government, but none has been forthcoming. So farmers have been taking matters into their own hands.

We meet another coffee farm owner, Eliezer Jacob. He tells me his irrigation pond is at only 10 percent of capacity. Coffee is too difficult to maintain, he says, because it needs too much water. So he has been diversifying his crops to make ends meet.

As his mother throws fertilizer on peppercorn plants, he tells me he is now growing a lot of things: cocoa, rubber, black pepper, pineapples, tomatoes, coconuts, watermelons, bananas, beans. While these crops also rely on water, they yield several harvests a year, providing a steady income.

"If I hadn't done it, things would have gotten ugly," he says.

The bad news for coffee drinkers? He says he and others are moving out of the coffee business for good.

The coffee co-operative COOABRIL wanted to make the following clarification after our story came out. They say that their official position is that the drought is being exacerbated by deforestation on the top of the hills, which is stopping the land and wells from absorbing water. They also say Eliezer Jacob, a farmer quoted in our story, is committed to growing coffee in the future, even though at present, most of his land is used for other crops.