Accessibility links
Ensaïmada, Symbol Of The Balearic Islands (And Summer Vacation) : The Salt The iconic pastry from the islands off the Spanish Mediterranean Coast dates back centuries. For visitors today, it's a necessary indulgence and a souvenir. 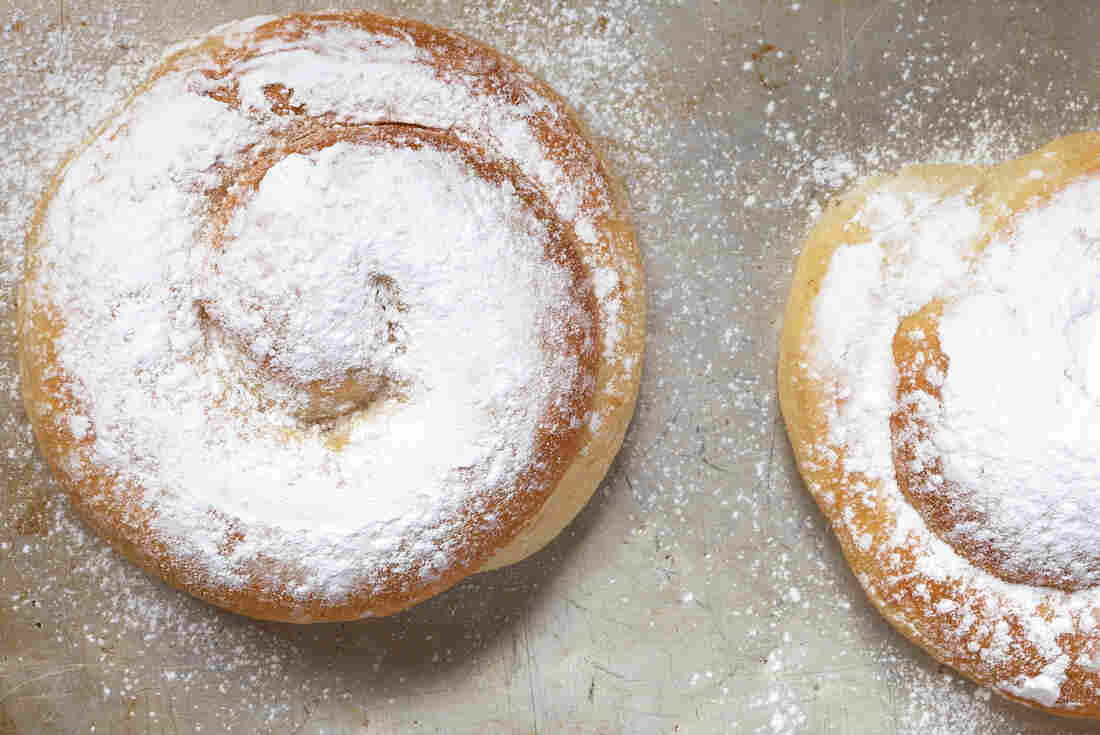 The ensaïmada is an iconic pastry from Spain's Balearic Islands that dates back centuries. Jeff Koehler for NPR hide caption 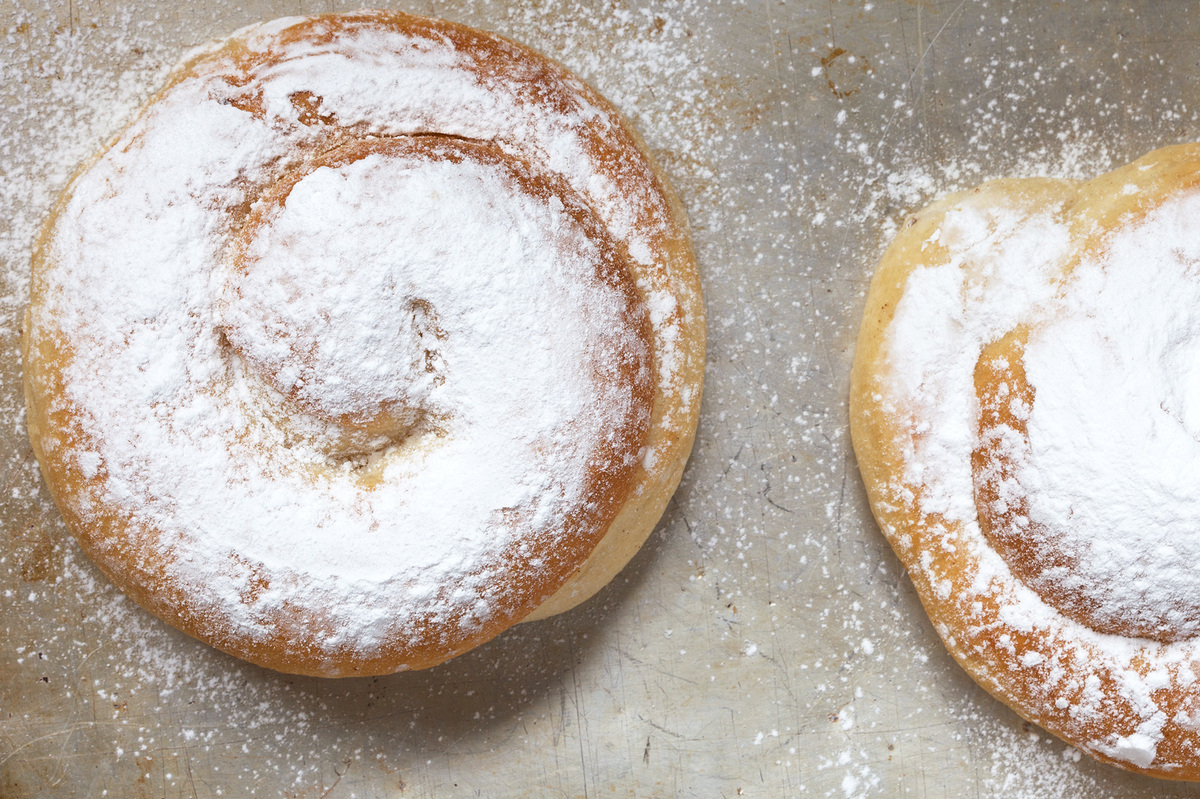 The ensaïmada is an iconic pastry from Spain's Balearic Islands that dates back centuries.

The night ferry to Menorca departs Barcelona at 11:00 p.m., slips past the sail-shaped W Hotel outlined in lights, and heads southeast across the (usually calm) Mediterranean as passengers disappear into their cabins.

Just after dawn, my wife, two daughters, and I join other sleepy travelers along the railing as the ship slides into the lengthy, finger-thin port of Maó. Once we have driven off the ferry and are heading towards our summer house in the center of the small island, we stop at a bar for a morning café amb llet (milky coffee) and flaky, spiral ensaïmada pastry dusted with powdered sugar.

For those who pass their summer holidays on one of Spain's Balearic Islands, off the Spanish Mediterranean coast, that moment— that first ensaïmada — means one thing: vacation has begun.

The flat, snail-shaped ensaïmada – as it's spelled locally in Catalan – is Mallorca's most emblematic food. It is equally iconic, and popular, on neighboring Menorca, Ibiza, and Formentera. Mallorca claims to be the original creator of the delicacy, but differences from island to island are minimal.

Made with coiled, lardy fermented dough, the outside is golden brown and slightly firm, even a touch brittle, while the inside is surprisingly ethereal. In the 1970s, Josep Pla, Spain's greatest food writer, called it the "lightest, airiest and most delicate thing in this country's confectionery."

Ensaïmades range in size, from individual portions, six or so inches across, to as large as a pizza that needs to be cut into wedges. While generally plain, pastissers also prepare them with cabell d'àngel ("angel hair," a stringy sweet made from squash pulp), creamy chocolate, sobrassada (a spreadable paprika-rich cured pork sausage), or apricot halves. Locals — and visitors — eat them for breakfast, as an afternoon snack, and for dessert. 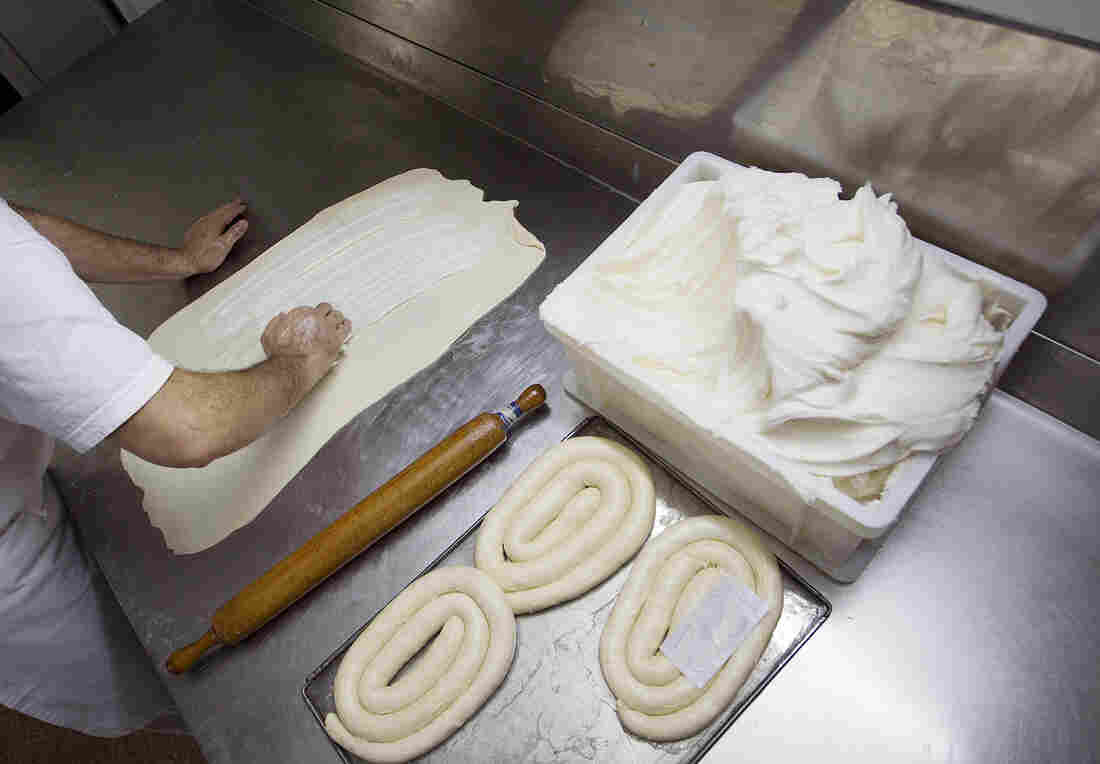 A baker prepares ensaïmades, a traditional sweet bread, at a bakery in Palma de Mallorca. The ensaïmada is a traditional Mallorcan dessert made with reduced pork lard. Jaime Reina/AFP/Getty Images hide caption 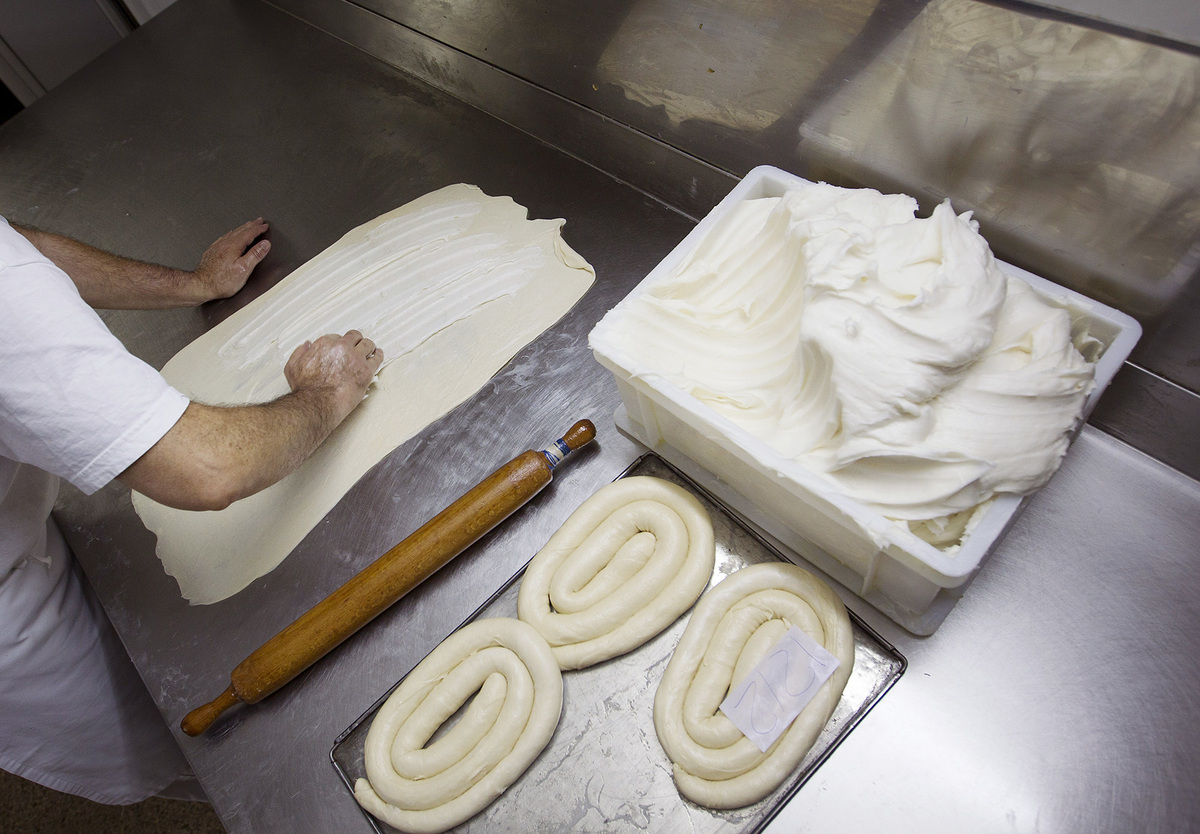 A baker prepares ensaïmades, a traditional sweet bread, at a bakery in Palma de Mallorca. The ensaïmada is a traditional Mallorcan dessert made with reduced pork lard.

Figuratively, at least. The pastry dates back many centuries, although precisely just how many is unknown. Its long history has been lost in the fog of legend and folklore.

The Balearic Islands saw waves of conquerors, who each left footprints on its baroque cuisine. Phoenicians, Romans, Vandals, Byzantines, and then, from around AD 900, the Moors, the general name for the Muslim inhabitants, ruled the islands. On December 31, 1229, Jaume I of Aragon conquered Mallorca (and soon after Menorca and Ibiza).

One legend claims that a Jewish baker presented the Christian conquistador with an ensaïmada upon his arrival.

Culinary sleuths, though, generally point to the Moors as the source of the pastry, even if their proof is circumstantial.

One flimsy argument is in the shape: coiled like a turban that the ruling Moors wore. For master pastissers like Tolo Pons, at Can Pons in Es Mercadal, the Menorcan village most associated with the pastry, the shape has more to do with getting the best from dough, which ferments for 12 to 18 hours. Pons makes a loose, open spiral with a snaking piece of dough, and as it expands overnight, the whorls connect, giving the pastry its archetypal shape and, once baked, characteristic textures.

A second argument points to the name, whose root is the Catalan word saïm, meaninglard. (Today llard is more commonly used.) This, some say, comes from the Arabic word for fat, samna (or sman as pronounced in North African Arabic dialect). The Gran Diccionari de la Llengua Catalana disagrees, naming its source as the vulgarLatin sagīmen.

It seems unlikely that a pastry whose name means "enlarded" would be of Muslim origin, given that lard is forbidden by the Q'uran. Lard is a defining ingredient. It gives the dough elasticity and finished flakiness, not to mention its name.

Then again, dishes rarely appear spontaneously, and one Mallorcan culinary historian has written about similar Moorish pastries on the island, called bulemes dolces, made with sheep's milk butter.

Perhaps the lard came later, with the new version taking a different name. In lands recently conquered by Christians, eating pork or items with lard was a way to prove you were not a Muslim. 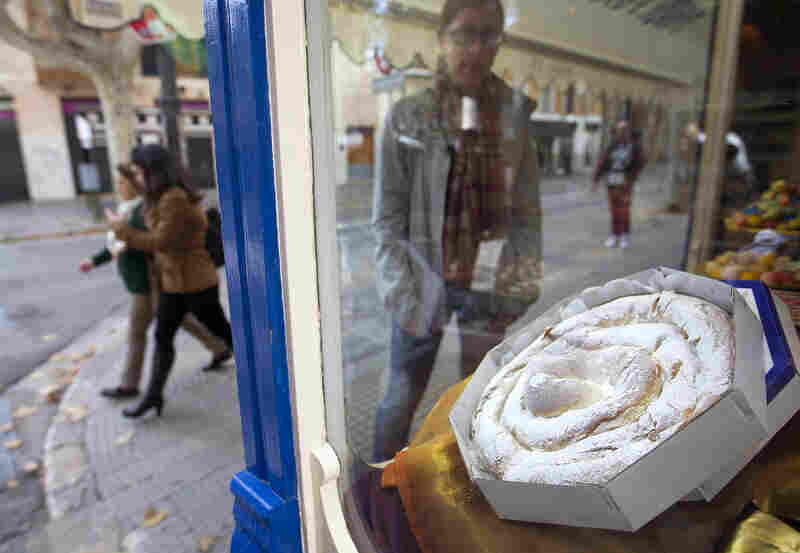 An ensaïmada, a traditional pastry, sits in the front window of a bakery in Palma de Mallorca. Jaime Reina/AFP/Getty Images hide caption 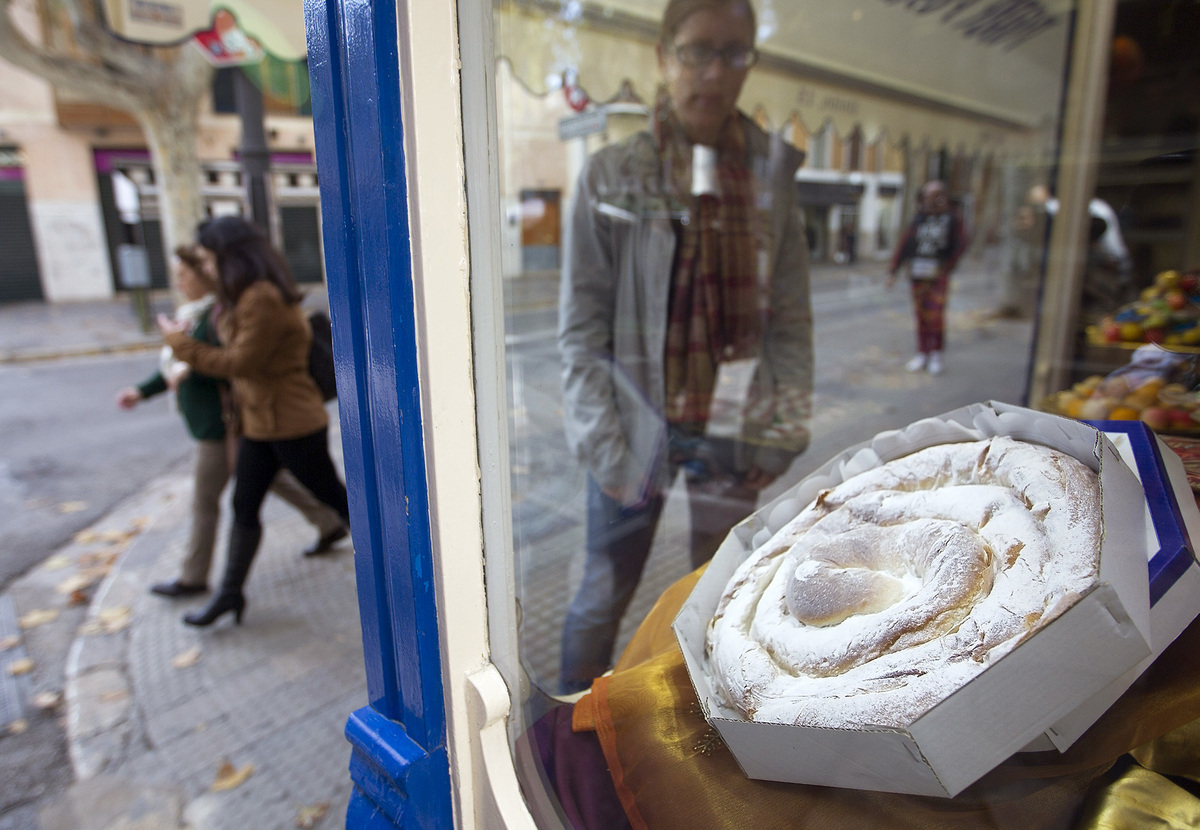 An ensaïmada, a traditional pastry, sits in the front window of a bakery in Palma de Mallorca.

Ensaïmada's early history, though, will remain speculation, as the first written references to it did not appear until the mid-18th century, in a collection of Balearic Island recipes gathered by a Franciscan friar. Ensaïmades, the friar noted, were treats for festive and celebratory occasions.

The pastry became widely popular, and was — is — a typical snack dunked into a cup of hot, thick chocolate. While absent from the early annals of food, references to the pastry have abounded since the 19th century, including high praise from some of Spain's greatest writers.

And its greatest chef, Ferran Adrià, the Picasso of the food world, didn't hold back, saying recently, "There is not a product equal to the ensaïmada in the world." Certainly not in Spain, where using fermented dough is rare.

The Mallorcan ensaïmada is considered so unique that the Spanish government awarded it Protected Geographical Indication status. Finding an ensaïmada on the Spanish mainland is not impossible, but they tend to be less airy or flaky.

For any visitor to the Balearic Islands, they are not just a daily holiday indulgence but a mandatory souvenir as well.

In the second week of September, before school restarts, we return to Barcelona. While my wife and I finish closing up the house, our girls go to one of the village bakeries to pick up our order of large ensaïmades to take home. On the seat between them in a packed car as we drive to the port is a tall stack of octagonal-shaped cardboard pizza boxes.

Most passengers disembark ferries (or flights) from Menorca or Mallorca with a stack of these boxes tied together with twine — gifts for a friend, an in-law, or perhaps the neighbor who has been watering the plants.

Carrying ensaïmades off the ship (or plane) is the final sign that summer is, alas, over.

Jeff Koehler is the author of Darjeeling: The Colorful History and Precarious Fate of the World's Greatest Tea, which won the 2016 IACP award for literary food writing. He moved to Barcelona in 1996. Follow him on Twitter @koehlercooks.