Accessibility links
Peruvian Farmers, Chefs (Yes, Chefs) Cash In On Guinea Pig Craze : The Salt The growing demand in South American restaurants for the rodent's crispy skin and fatty flesh is helping improve the lives of small farmers in Peru. 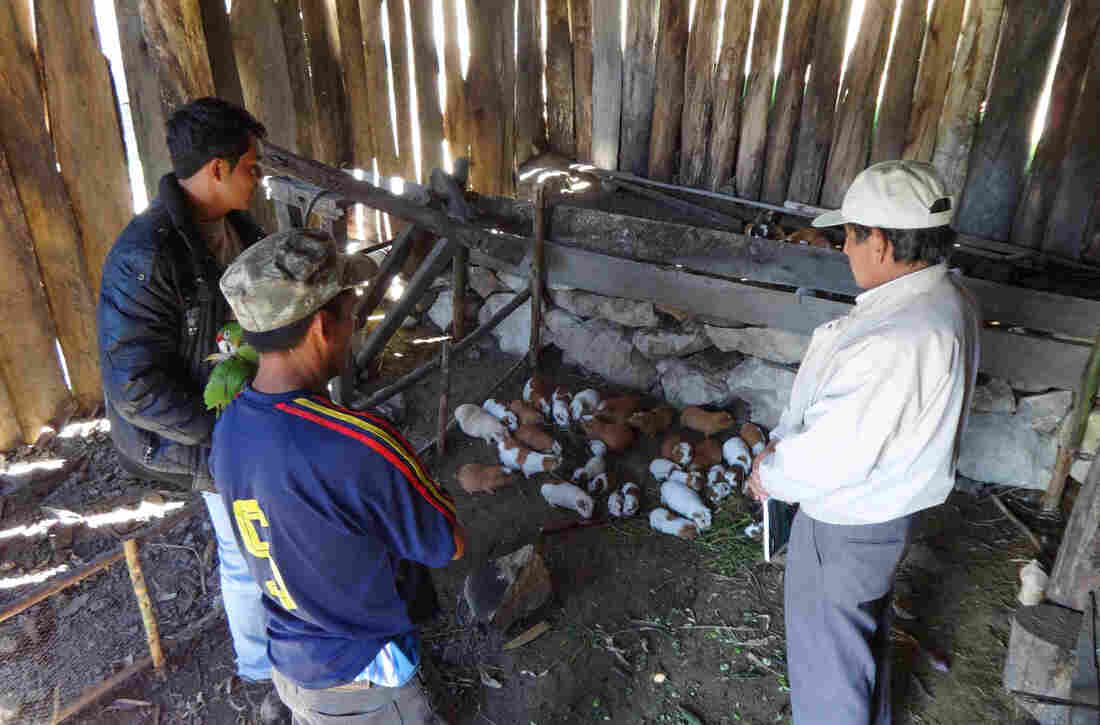 Peruvian farmers talk to a staff member of the aid group World Neighbors about getting a loan to invest in their guinea pig farm. Julio Moscoso/World Neighbors hide caption 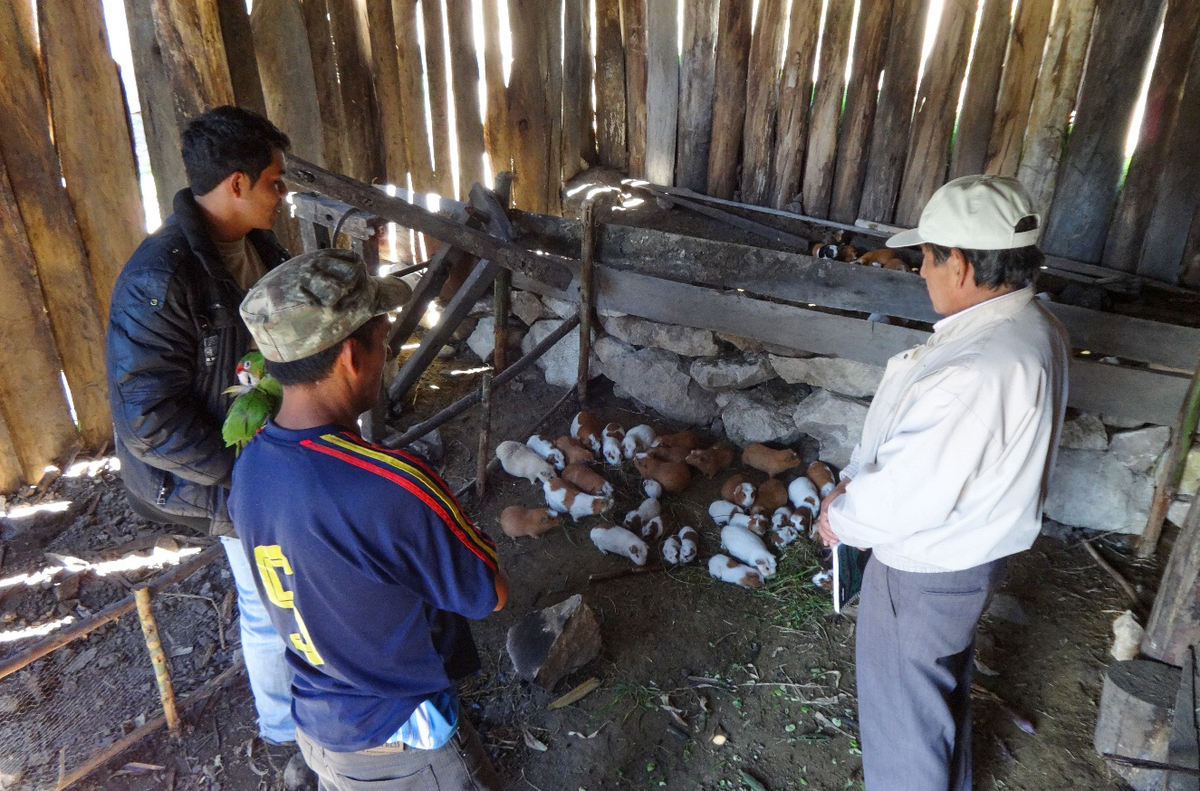 Peruvian farmers talk to a staff member of the aid group World Neighbors about getting a loan to invest in their guinea pig farm.

Rodents are generally the last things most restaurant owners want in their kitchen.

But in the larger cities of Peru, chefs are practically fighting over guinea pigs in a restaurant craze that is bringing financial stability — if not exactly wealth — to small farmers in the Andes Mountains.

People have eaten this furry rodent for centuries in the high country of Ecuador, Peru and Bolivia. Called cuyes in Spanish, guinea pigs were traditionally fried or grilled and eaten for special occasion-meals, or boiled into a stew and served to the ill or injured as a sort of tonic. Andean lore even holds that guinea pig meat contains cancer-fighting properties.

In the past decade or so, guinea pig popularity has exploded, as the cosmopolitan dining culture of Lima and other Peruvian cities has taken a liking to the animals — not so much for their big fawn-like eyes but more for their fatty flesh. The guinea pig's skin, crispy when fried, is also coveted.

For farmers in the high mountains of southern Peru, the rising interest in this rabbit-sized rodent comes as a chance to cash in. The average income for a household here may run the equivalent of only $100 a month, according to Lionel Vigil, the Lima-based regional director for the social aid organization World Neighbors. 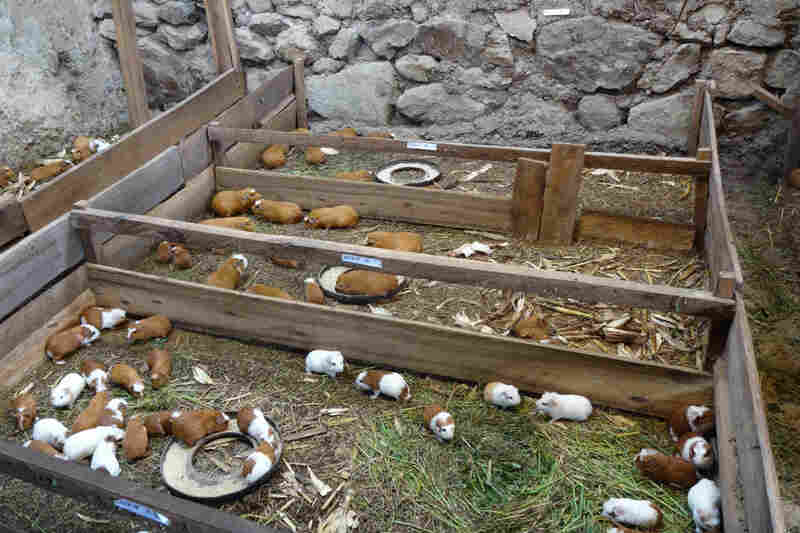 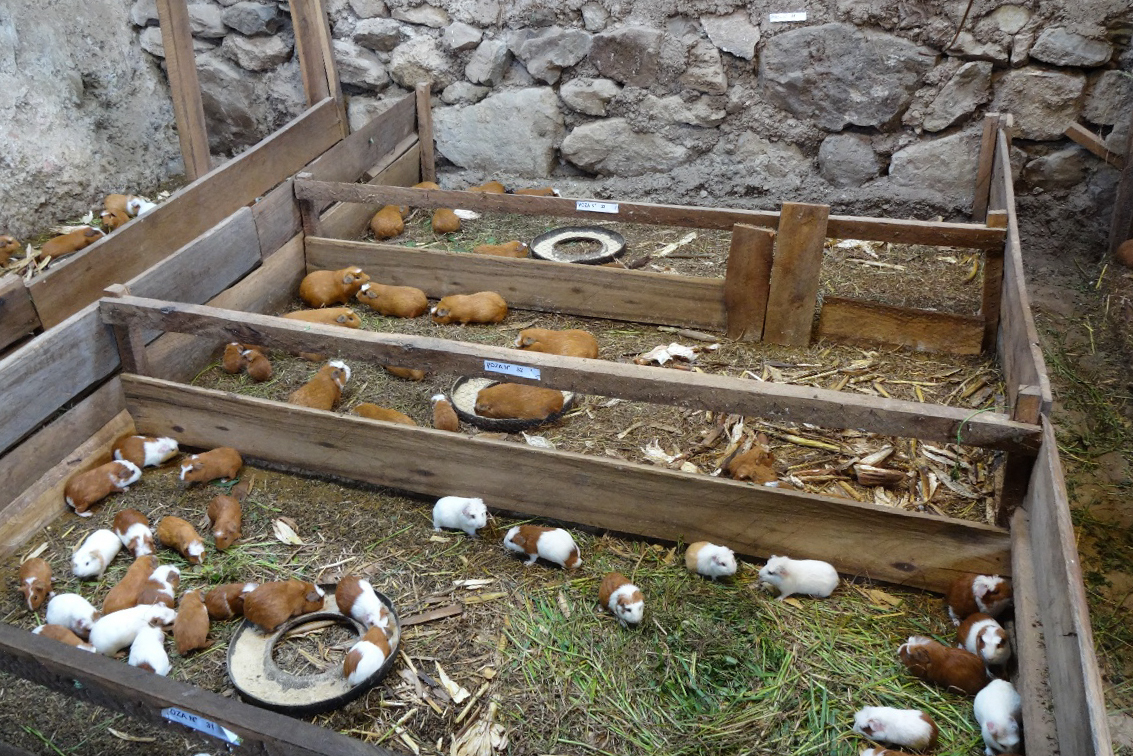 Guinea pigs on a Peruvian farm feed on grass and alfalfa.

"These people really are the poorest of the poor," Vigil says. "But when we incorporate guinea pigs into their lives, they can add an extra $100 per month."

Since 2005, Vigil's group has helped several dozen families in the impoverished regions of Apurimac and Ayacucho get started in the guinea pig business. One of the first things the organization must do, Vigil says, is help a family establish credit and take out a loan to buy a few breeder guinea pigs, which may run about $10 apiece. World Neighbors' on-site staff helps the farmers install basic guinea pig infrastructure, like cages and feeding troughs.

Sold to restaurants, each of the rodents pulls in about 15 Peruvian soles (the equivalent of almost $5) for the farmer, according to Vigil. He says no one he knows is getting rich in the guinea pig trade. However, some are doing quite well. The animals breed prolifically, and one particular farmer who bought two guinea pigs a year ago now has 400, Vigil says.

Heifer International, based in Little Rock, Ark., is independently running a similar program geared toward improving people's quality of life. Since 2000, the nonprofit's Peruvian program has donated 23,000 guinea pigs to 2,300 families, according to Jason Woods, Heifer International's senior communications director.

The animals are usually kept in barns outside the home. Many are fed a blend of mealtime leftovers and alfalfa grass. Since they convert plant matter into body mass about twice as efficiently as cows, guinea pigs are cheap to grow.

Guinea pigs are slaughtered and sold at the tender age of about two months. At this point, each cuy is gutted and its hair removed after a dunk in boiling water. The idea is to leave the delicious skin intact.

"When guinea pigs are fried in pieces like chicken, the skin becomes crispy, which is most appealing to consumers," Vigil says, describing the more traditional approach to dining on guinea pig.

In upscale Lima restaurants, such as El Rocoto or Panchita, chefs have fancier tricks up their sleeves. One, Vigil says, is to make "guinea pig rolls" by removing the bones and wrapping vegetables and guinea pig meat together within the skin.

Another typical dish is chiriuchu, a specialty of the Cuzco area.

"It combines all kinds of food — guinea pig, chicken, beef, fish, cheese and vegetables," says Woods, who has traveled in the region while working with Heifer International. "It basically looks like a big pile of meat."

Woods says guinea pig consumption, once mainly limited to households, is exploding in Peru's restaurants. Some, called cuyerias, actually specialize in cooking and serving guinea pig. Sol Moqueguano, for example, was launched 17 years ago in Cuzco.

"The owner told me that when he started, there weren't any restaurants that sold cuy in Cuzco," Woods says. At the time, Woods says, cuy was served mainly for weddings, anniversaries and other special celebrations.

While South Americans revisit old traditions of dining on cuy, interest in other countries is minimal, rooted mainly in small populations of Andean ex-pats, Vigil says. One United States importer based in Connecticut is importing about two tons of frozen guinea pigs into the United States each month, mostly at the demand of immigrants from Ecuador, Peru and Bolivia, according to Vigil.

But he doubts the guinea pig as a kitchen staple will ever go mainstream in the United States.

"It will never catch on with Caucasian Americans," he says. "They see guinea pigs as pets, not food. This is not something the culture of the U.S. will accept."