Accessibility links
Cut Down On Bee-Killing Pesticides? Ontario Finds It's Easier Said Than Done : The Salt Pesticides called "neonics" are popular among farmers, but also have been blamed for killing bees. In Canada, the province of Ontario is trying to crack down on neonics, with mixed results. 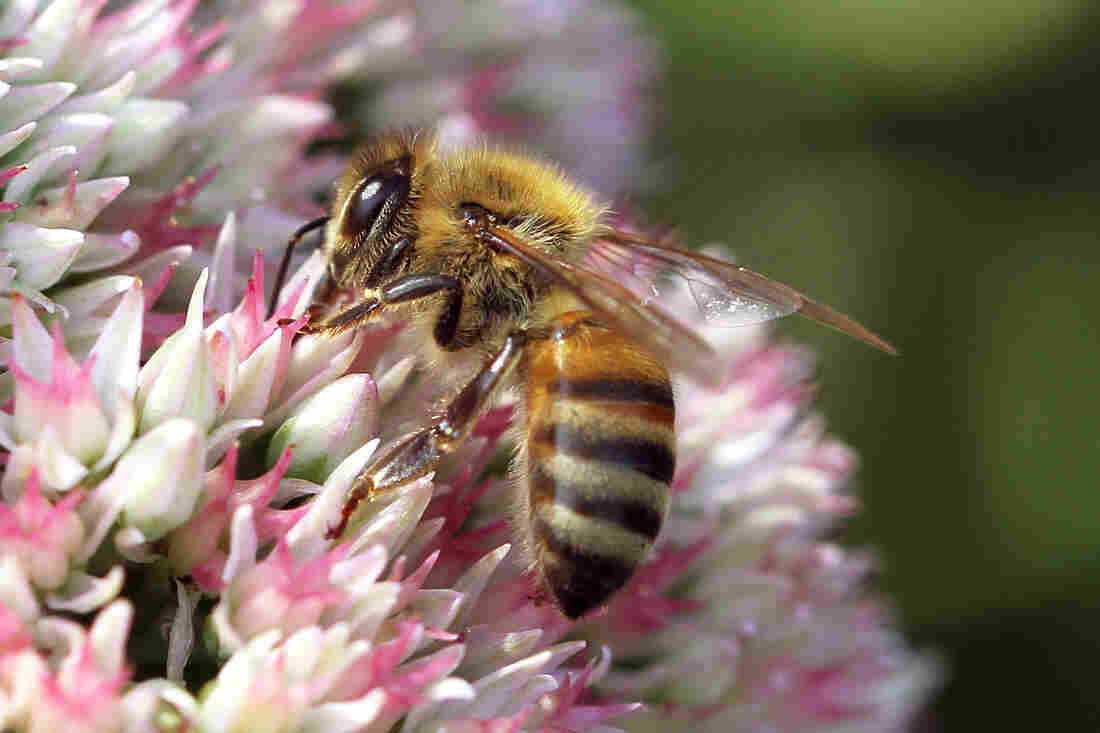 Pesticides called "neonics" are popular among farmers, but also have been blamed for killing bees. In Canada, the province of Ontario is trying to crack down on neonics, with mixed results. James Capaldi/Flickr hide caption 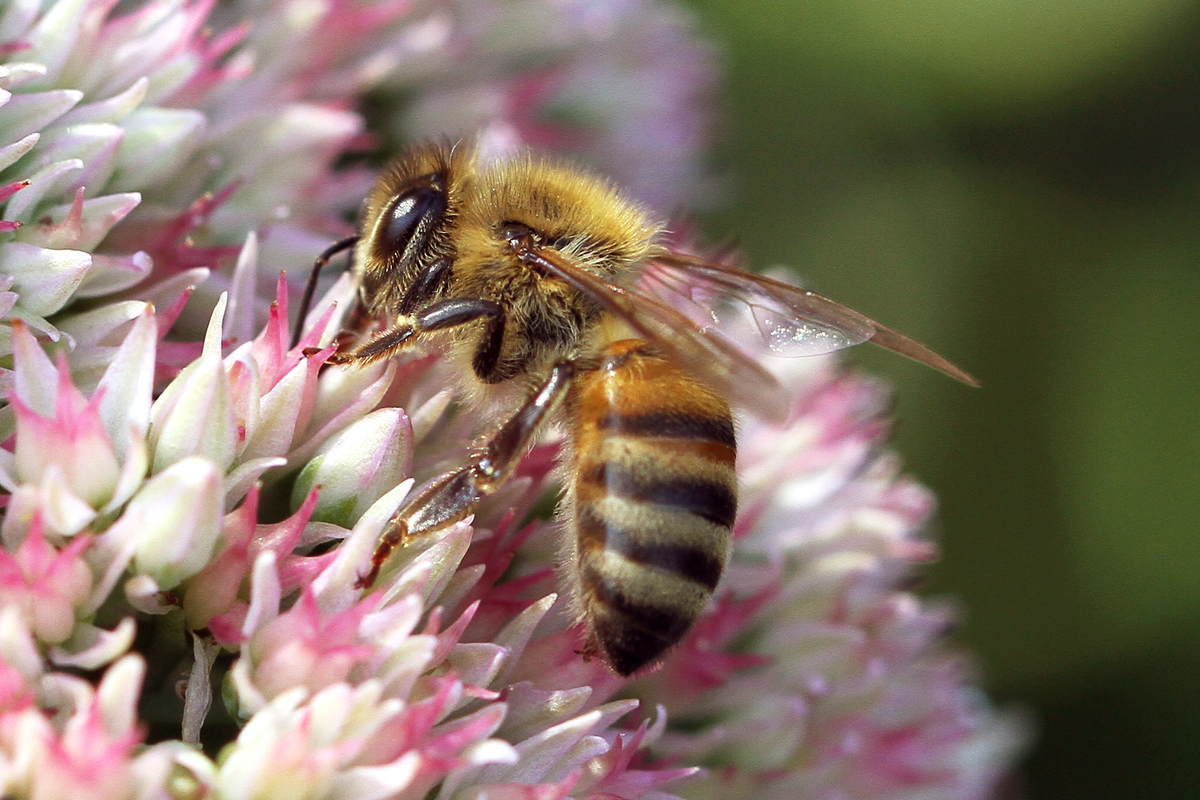 Pesticides called "neonics" are popular among farmers, but also have been blamed for killing bees. In Canada, the province of Ontario is trying to crack down on neonics, with mixed results.

Nobody loves pesticides, exactly. But one kind of pesticide, called neonicotinoids, is provoking a particularly bitter debate right now between environmentalists and farmers. The chemicals are highly toxic to bees. Some scientists think they are partly to blame for the decline in pollinators.

For the past year, the province of Ontario, in Canada, has responded to the controversy with a novel experiment. Ontario's government is asking farmers to prove that they actually need neonicotinoids, often called neonics. It turns out that "need" is a word that's hard to define.

The experiment has its roots in a mass killing of bees in 2012.

"It was a very early spring," recalls Tibor Szabo, a beekeeper who lives near the city of Guelph. Warm days meant early blossoms on trees, and as a result, honeybees were out collecting pollen while farmers planted their corn and soybeans nearby.

Szabo started hearing reports from beekeepers in the southeastern corner of the province that their bees were getting killed by dust that came from farmers' planting equipment. He heard that "there was a chemical that was on the seeds." It was some sort of pesticide.

Then disaster struck a few of his hives.

"It looked like the hive itself had thrown up a bunch of dead bees," Szabo says. "There was a huge pile out in front of the hive, a huge pile right at the entrance, and a few bees wiggling in between the dead ones to get in and out of their entrance hole in the bottom of the hive."

At that point, Szabo hadn't heard of neonicotinoids. But he soon learned that most of the corn and soybean seeds that farmers plant, all over North America, are coated with these chemicals. The newest, most modern planting equipment uses air pressure to move seeds around, and as a result, some of the seed coating is blown into the air. Scientists found traces of neonics in beehives.

Bayer, the primary manufacturer of neonicotinoid seed coatings, argues that they pose only a minor threat to bees, because the insects rarely encounter enough of these chemicals to do any harm. The company also has come up with technologies that are supposed to minimize the release of neonics from planters.

But scientists are finding evidence that even tiny doses, too small to kill bees, can weaken them and decrease their numbers over time.

In Ontario, the bee deaths led to a political movement. "The public really found sympathy with our cause," Szabo says.

In 2015, Ontario's government passed a law that aims to cut the use of neonics by 80 percent. Under this law, farmers cannot use neonic-coated seeds unless those pesticides are truly needed to protect a farmer's crop.

It sounds sensible. There's just one problem. Need is hard to define.

The main pests that these chemicals fend off — wireworms and grubs — live underground. Farmers don't know if they're there, or how many there are, or how much damage they'll do.

So Ontario came up with a test. If farmers want to use neonic-treated seeds, they first have to go out to each of their fields, dig some holes, and drop in some insect bait — typically grain or rolled oats that have been soaked in water.

It's meant to attract the pests. If they can find just one insect for every hole they dig, they can order neonic treated seed.

This leads to a paradoxical situation. Most farmers are hoping to find the pests, because they really want neonics on their seed. Greg Hannam, for instance: "I hope that I find enough wireworms and grubs that demonstrates the need, so I can use [the seed treatments]," he says. 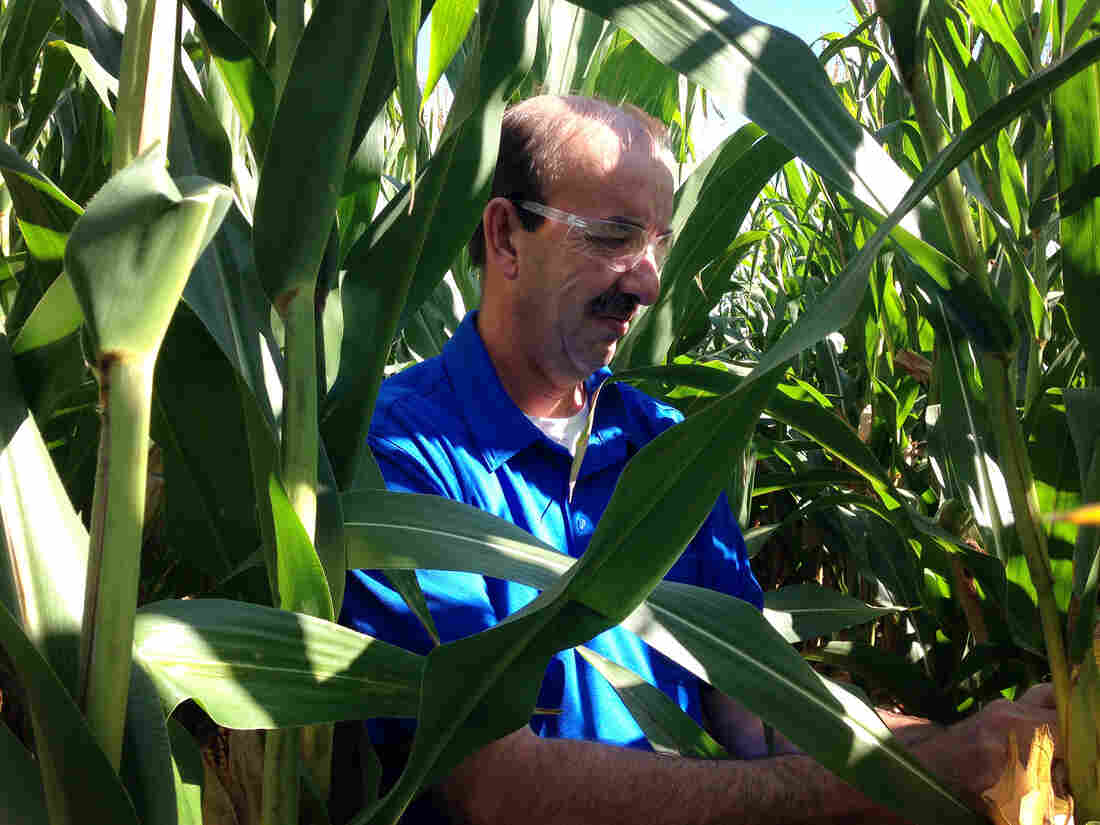 Stephen Denys, an executive at a small seed company, is conducting an experiment with neonic-coated seeds. Dan Charles/NPR hide caption 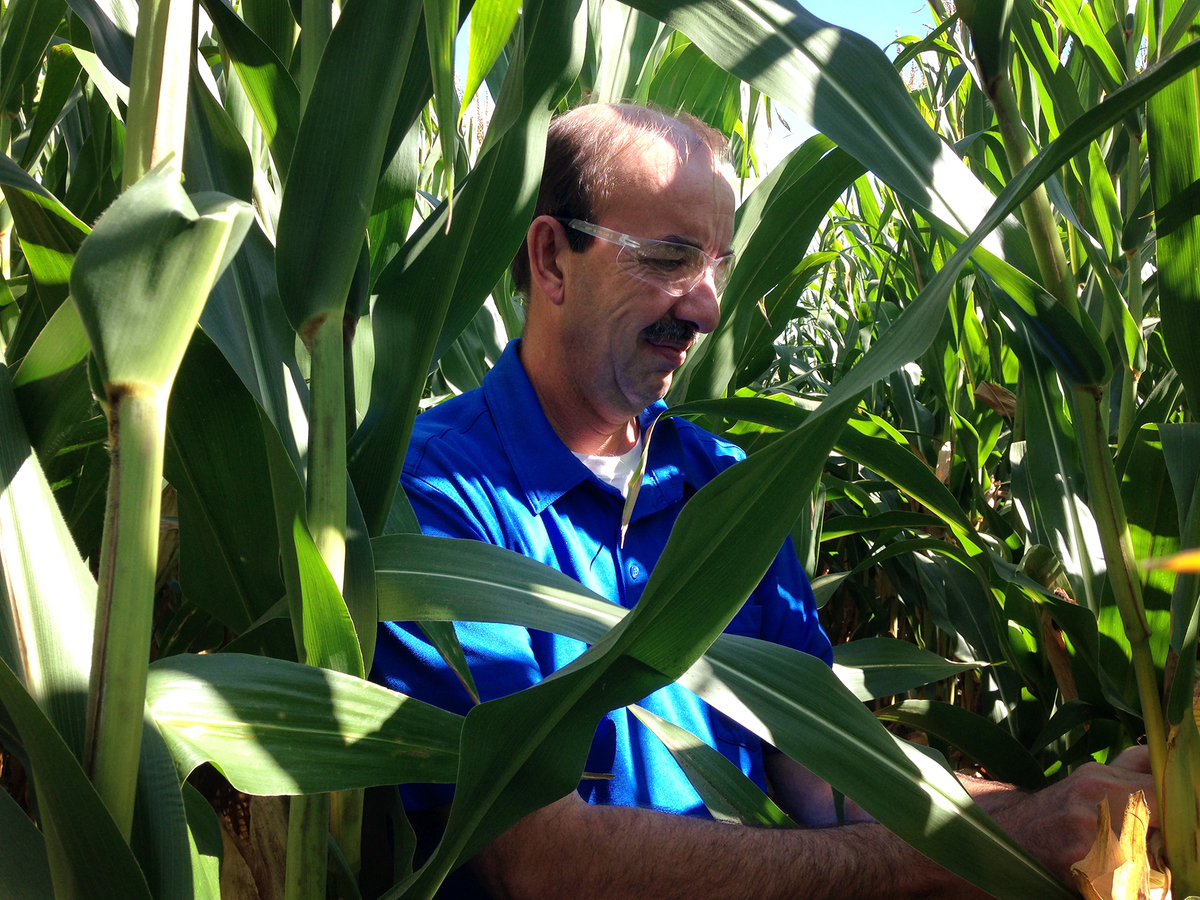 Stephen Denys, an executive at a small seed company, is conducting an experiment with neonic-coated seeds.

Stephen Denys takes me out into a corn field. Denys is also an executive at a small seed company — Maizex Seeds.

This field is an experiment. Half of the seeds he planted here were coated with neonics, half were not.

This row here, Denys says, probably did not have the insecticide. "If you look in here, you see lots of gaps," he says. There's just bare dirt where stalks of corn should be.

The rows with neonic-treated seed, he says, don't have so many gaps.

Field trials conducted by researchers at the University of Guelph show that, on average, farmers lose only 1 or 2 percent of their corn crop if they don't use neonic-coated seeds. But they can, in some cases, lose up to 15 percent. And farmers like Denys don't want to take that risk.

According to the farmers and seed dealers I interviewed, farmers in Ontario are reporting that their bait traps show they need neonics in most of their fields. No one is checking up on farmers to make sure that they are reporting these results accurately. Dale Cowan, with the company Agris, a seed dealer in Ontario, says that "probably this year, between 75 and 85 percent of corn seed went out the door with neonic seed treatment on it."

That's nowhere close to the dramatic neonic reduction that the law promised.

The government will release official data on this later this fall. Some environmental advocates who support the law believe that in the future, farmers will realize that in many cases, the neonic treatments simply aren't necessary.

Beekeeper Tibor Szabo, for his part, says that if the law isn't delivering major cuts in the use of neonics, beekeepers will demand new regulations that are even stricter.