Accessibility links
Tijuana Border Plan Could Oust A Rich Food Culture And Its Cooks : The Salt Plans to expand the border crossing could bulldoze over a longstanding market where many food vendors have made their living — and in some cases, their homes — for years, if not generations. 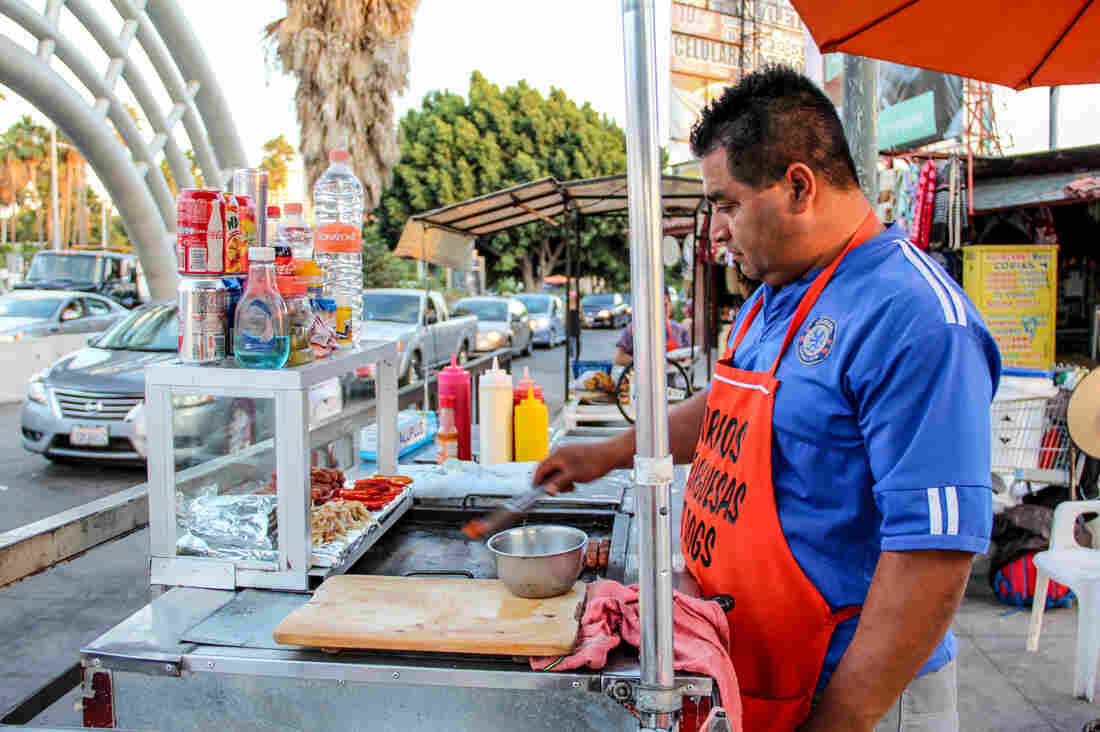 Carlos Rodriguez grills bacon-wrapped hot dogs on his food cart. Next to him, his family sells churros from their other food cart. Alex Zaragoza for NPR hide caption 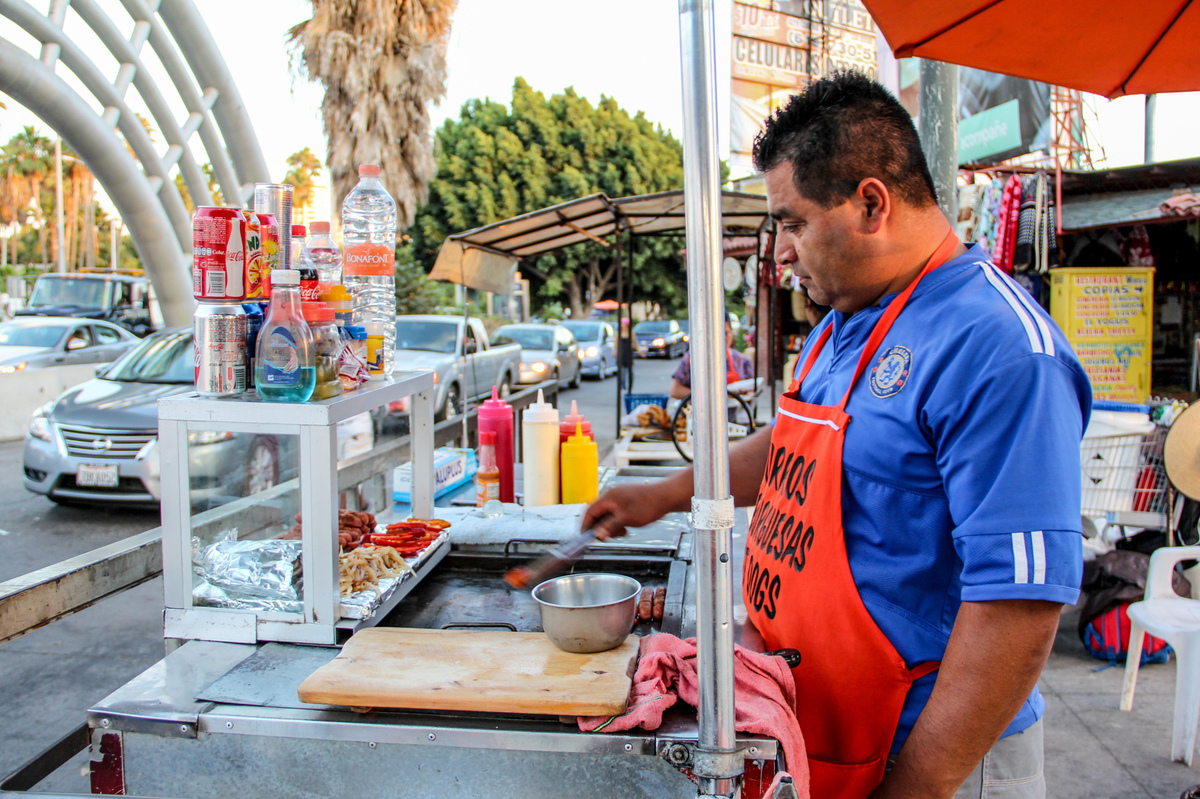 Carlos Rodriguez grills bacon-wrapped hot dogs on his food cart. Next to him, his family sells churros from their other food cart.

On a blistering 90-degree day, Nelly Carrillo stands over her stove, placing a chorizo and potato sope onto the oiled cast-iron skillet. The thick, fried tortilla sizzles, and she wipes sweat off her brow with the back of her softly wrinkled hands. You can hear a cacophony of honking cars and voices in the near distance.

It could be a scene in any Mexican kitchen, except Carrillo's is surrounded by thousands of cars — all making their way across the Tijuana border into the United States. She's been operating her lonchería, or luncheonette, here for 30 years, making pozole, menudo and other staples of Mexican cuisine inside the small mercado de artesanias, or artisan market, at the U.S. border crossing. The 57-year-old put her two children through university in Mexico with her small business.

Since 2009, the San Ysidro Port of Entry has been undergoing a major expansion on both sides of the border that includes new pedestrian bridges, inspection areas and an administration building. Rumors began swirling within the last year that the expansion would now include demolishing the artisan market, where Carrillo and about 1,600 other people operate their businesses, many of them food carts and loncherías.

"The older people here, we're the ones that will be affected the most," says Carrillo, who inherited her space at the mercado from her father. "Young people can just move without a hassle. But us, the older people, where are we going to find a job? We have a job here and keep working towards this. Young people can move, but we already built a foundation here."

The U.S.-Mexico border in Tijuana-San Ysidro is the busiest land port of entry in the Western Hemisphere. Some 50,000 cars pass through each day, with an additional 25,000 people crossing into the U.S. on foot. As they wait, sometimes for hours on end, it's people like Carrillo that feed them. 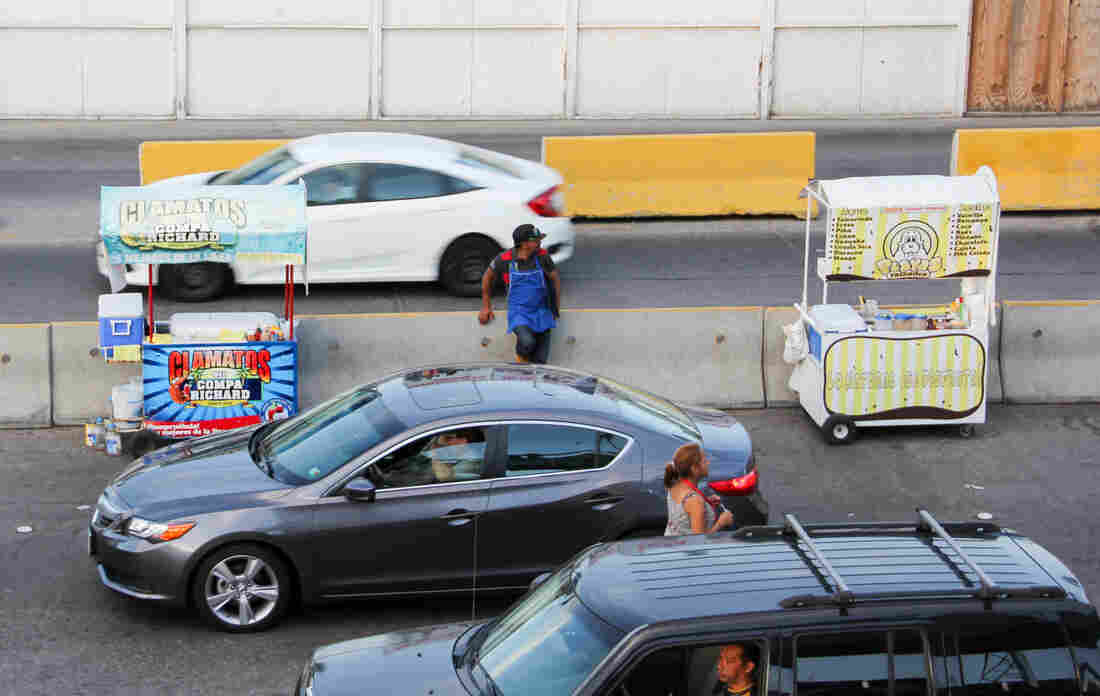 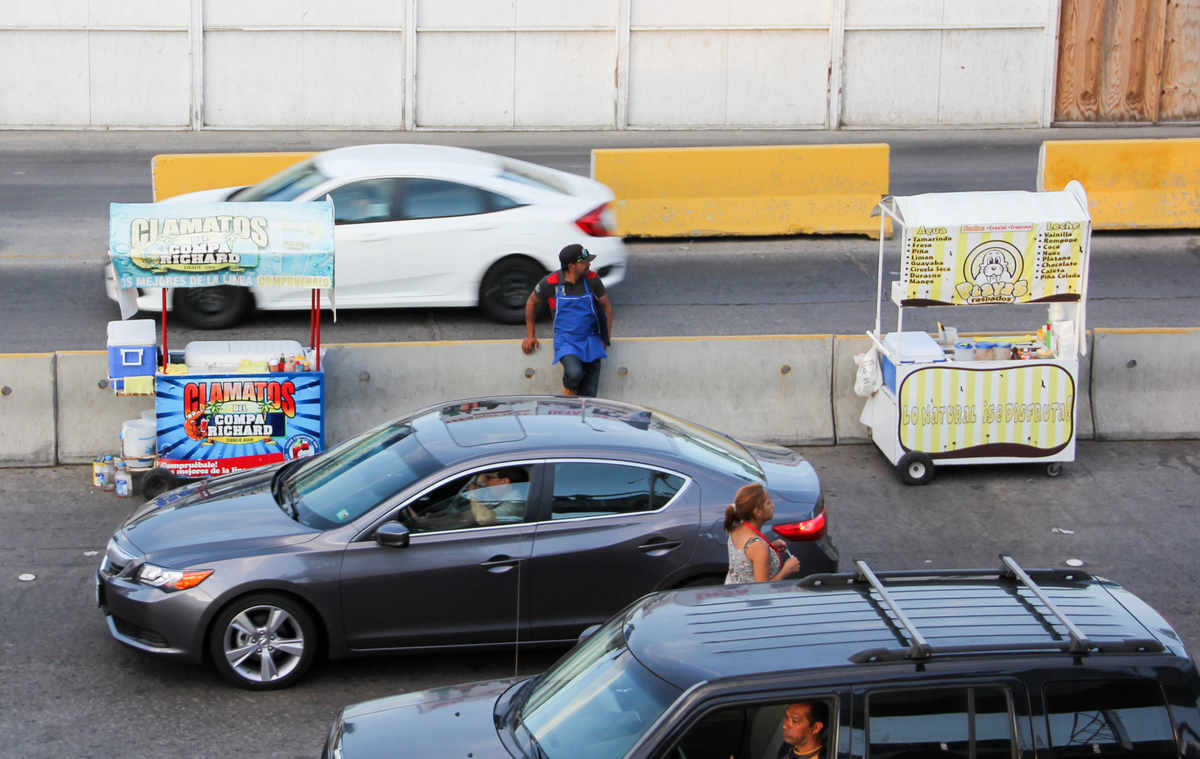 Just about any time of day, there's no going hungry in the border line. In the morning, warm burritos and tortas beckon. Afternoons bring street foods like bacon-wrapped hot dogs and tacos, tostilocos (Tostitos Salsa Verde corn chips covered with toppings including lime juice, hot sauce, Japanese peanuts and pickled pork rinds), and fruit salads smothered in lime, the Mexican spice mix Tajin, and a savory, fruit-based chamoy sauce. For the sweet tooth, there are desserts like the handmade, sorbet-like nieve de garrafa.

Feeding people is a deeply ingrained part of Mexican culture, and many of these vendors will tell stories of how they learned to cook (usually at home with their mother) and why they love making food (because food is love).

Héctor Vanegas is the border programs manager for the San Diego Association of Governments, a public agency that serves as a forum for regional decision-making. He says he's been briefed on the Mexican government's "complex plan to modernize the Port of Entry." He says it includes demolishing the mercado and building a new structure to the west of where the current one stands to make room for more northbound lanes and ease traffic.

The plan to move the market would involve both U.S. and Mexican authorities. We reached out to more than a dozen government entities and groups working on border infrastructure in both the U.S. and Mexico, but none could or would provide further details. (We'll post an update if we hear back.)

But Vanegas says the plans he's seen would deprive merchants of more than their livelihoods. People aren't supposed to live in the mercado, he explains, "but they do live there. Not only will they be demolishing their businesses but also their homes." 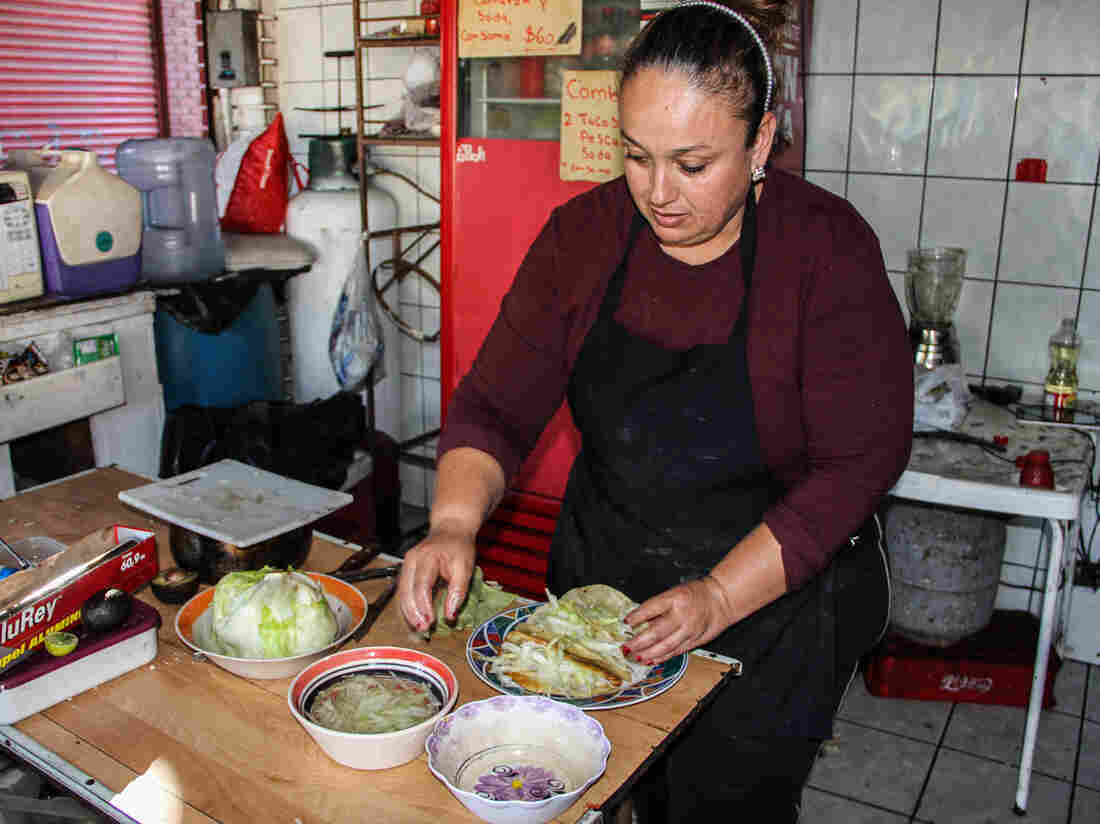 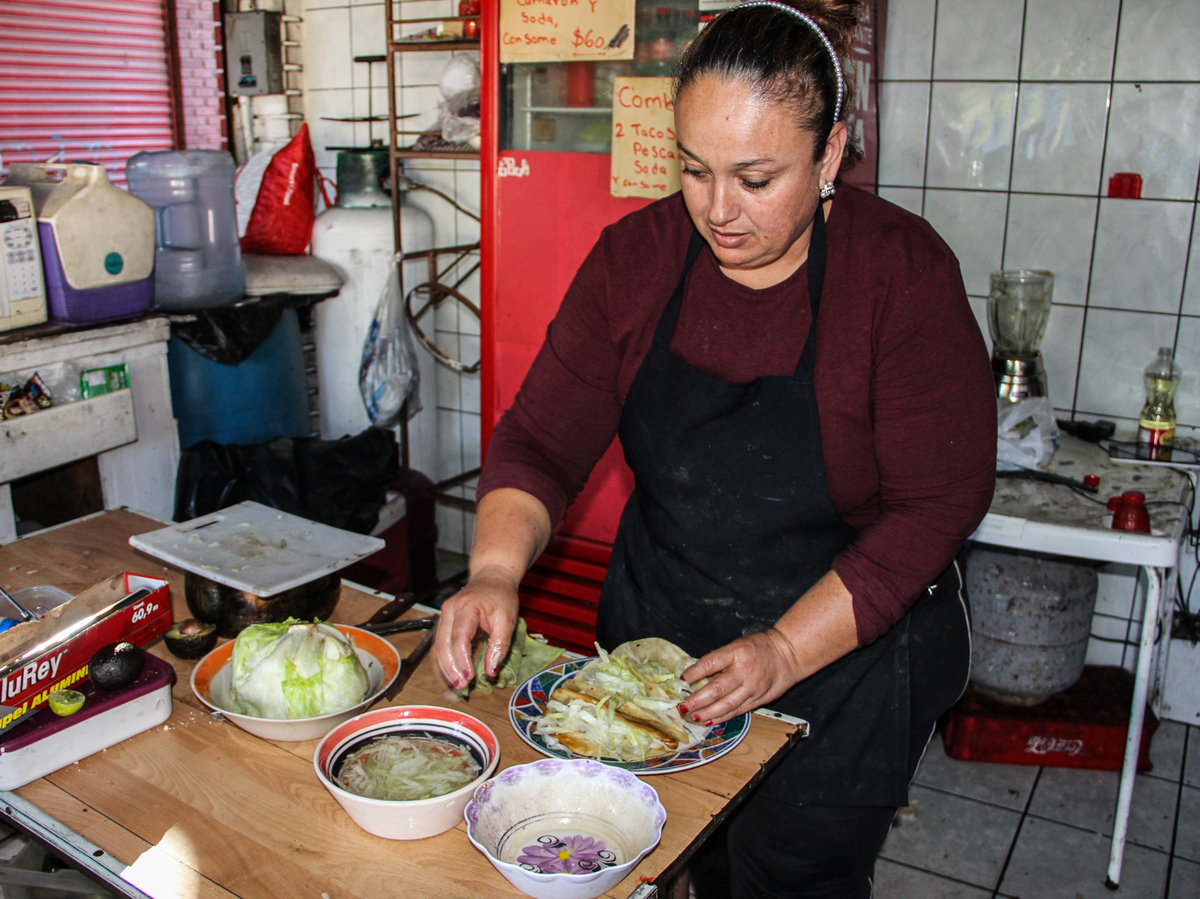 Elvia Gonzalez has been making and selling traditional Mexican antojitos (street food) at the mercado for two years. She's built relationships with her fellow merchants, razzing them playfully as they sit at her counter eating crispy tacos. Currently she rents her space. Gonzalez worries that a long wait before the new mercado is built will leave her family with no place to run their business. And once it is built, a spot for her lonchería may not be guaranteed, depending on permits, space limitations and other factors.

"No matter what — how much we yell and what we do — this is going to move," she says. "What is unfortunate is that a lot of people depend on this. We don't know the magnitude of the move and how much it'll affect everyone. ... The young ones who come here can't depend on this for a living, because this is reaching an end."

Vanegas believes that the Mexican government will work closely with the merchants and won't "come with bulldozers without letting people know."

For now, the market's future remains in limbo, say Amy Sanchez-Arteaga and Misael Diaz of Cog•nate Collective, a team that works on collaborative arts and research projects related to the border. The two have been working with mercado merchants for years and say negotiations with Mexican authorities are still underway. They believe that demolishing the market would not only threaten livelihoods, but also represent a major cultural loss.

"For us, the market is a vital space, inserting character, history and a social-cultural ... dimension to the process of crossing the border," they told me in an email.

Enrique Matteos has owned a loncheria in the mercado for 10 years, though it's been in his family for 30. He and other merchants have proposed that the Mexican government renovate the mercado and help maintain it, rather than tear it down.

And the renovations are much needed. Nelly Carrillo remembers a time when the market was bright, colorful and maintained by a cleaning service. Now, she says, "everything looks ugly."

Adriana Rios Vazquez is a professor in the tourism department at the Autonomous University of Baja California. She's helping to lead a series of studies on the market. She thinks that getting merchants certified as tourism operators can help their case, especially since they do provide a service to tourists in the form of sustenance.

"We don't want to take them out of there," she says of the mercado's merchants. "We want to help them."

For now, Carrillo and her fellow mercado food vendors will continue to fight the demolition plans – and of course, to cook and feed the masses.