Accessibility links
Trick Or Treat? Critics Blast Big Soda's Efforts To Fend Off Taxes : The Salt Several U.S. cities have sugary drink taxes on the ballot. As efforts to reduce soda consumption gain traction around the world, critics say the industry is using the tobacco playbook to fight back. 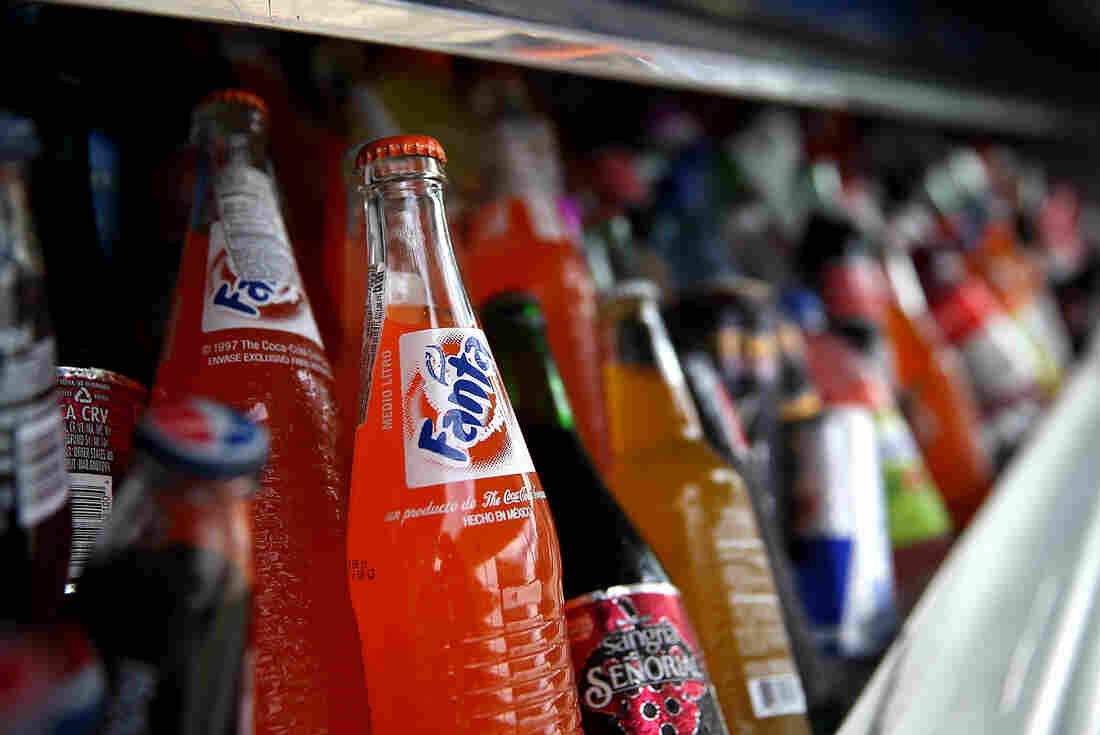 Bottles of Fanta are displayed in a food truck's cooler in 2014 in San Francisco. The city is one of several in California that have a soda tax on the ballot this November. Justin Sullivan/Getty Images hide caption 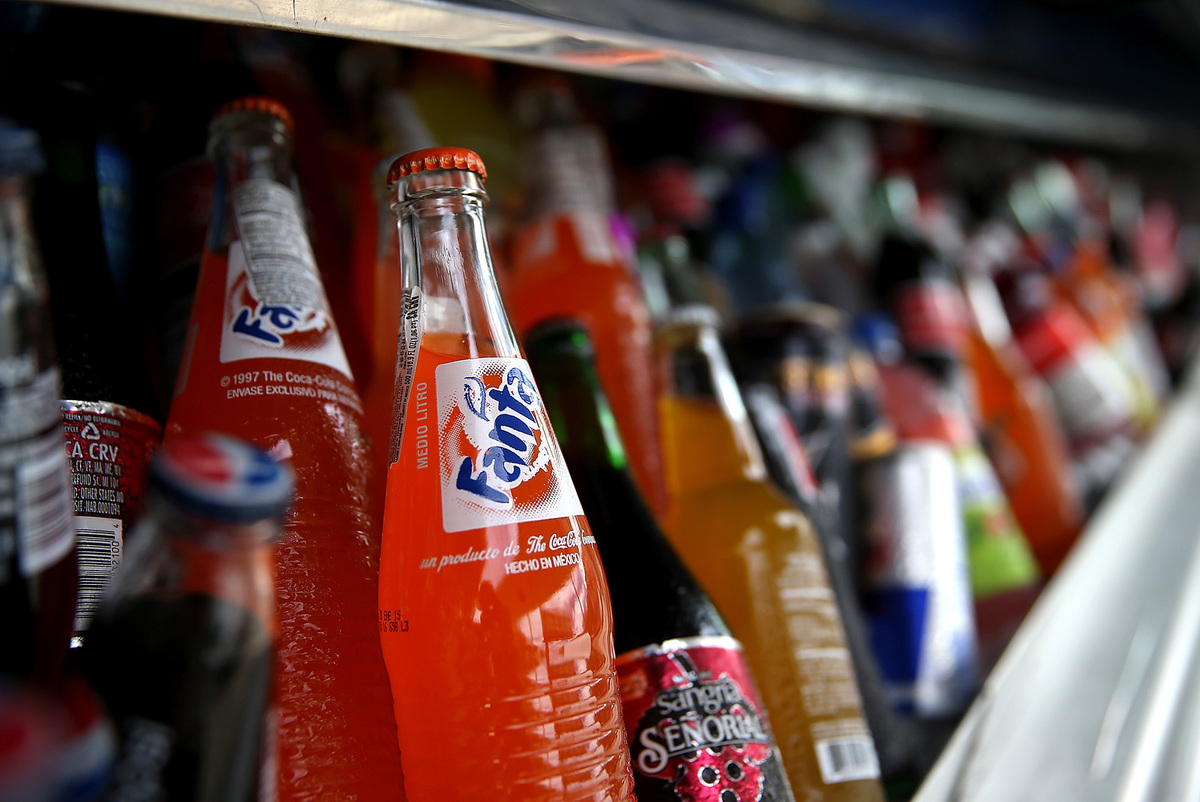 Bottles of Fanta are displayed in a food truck's cooler in 2014 in San Francisco. The city is one of several in California that have a soda tax on the ballot this November.

If you live in the San Francisco Bay Area, you may have seen ads urging you to vote "no" on a grocery tax. "Don't Tax Our Groceries" is the tagline of the $9.5 million campaign, which is funded by the American Beverage Association.

In one ad, the camera pans to images of tomatoes and beans, as a local business owner says, "The grocery tax is going to hurt my customers."

But here's the thing. There's no grocery tax on the ballot.

"That's the trick [the soda industry] is using," says Dr. Michael Siegel of Boston University School of Public Health. "This is just a mirage by the soda industry to try to hide the fact that this is a targeted tax on sugar-sweetened beverages."

What's actually on the ballots in San Francisco, Oakland and Albany, Calif., and in Boulder, Colo., are measures to tax soda and other sugary drinks.

Tax Soda To Fight Obesity, WHO Urges Nations Around The Globe

The beverage industry is under increased scrutiny. A growing body of evidence concludes that sugary drinks are a key contributor to obesity. And the passage of a sweet beverage tax in Philadelphia earlier this year gave new momentum to the growing movement for soda tax initiatives.

"The fact that the American Beverage Association is labeling the sugar drink tax in Oakland a grocery tax shows their desperation," says Dr. William Dietz of George Washington University, who has been on the front lines of fighting the obesity epidemic.

The industry pushes back against the idea that the No Grocery Tax campaign is misleading. "No, our ads are telling the voters what is actually on the ballot," says Joe Arellano, spokesman for the campaign.

The idea is that retailers will pass the cost of the tax on to consumers in the form of higher soda prices. But Arellano argues that retailers could raise the price of other grocery items instead of raising the price of sugary drinks. "Grocery prices could go up," Arellano says. "We just think that's not good public policy."

Dietz says that as the pressure on the beverage industry mounts, it's using a range of strategies to fight back. "One could argue that the tobacco industry playbook has been adopted in its entirety by the sugar drink industry," he says. (This paper compares the similarities in tactics.)

He says the industry has "undermined the science [linking sugary drinks to obesity] by funding studies which showed the contrary." Coca-Cola came under fire last summer after The New York Times highlighted the company's funding of industry-friendly scientists — whose research often focused on the role of physical activity in the obesity epidemic, rather than on poor diets.

The American Beverage Association says it wants to be "part of the solution to reducing obesity in America." But the ABA, which represents all the major players, including Coca-Cola and Pepsi, argues that taxing people is not the way to accomplish this.

"Taxes don't make people healthy," an ABA spokesperson told us back in 2012, after the governor of Massachusetts proposed a sugar tax. "Educating [people] on how to balance the calories they consume with the calories they expend" is the better strategy, the ABA argues.

In other words, it's OK to drink soda or sweetened tea or other sugary drinks, as long as you work off the calories through physical activity.

But here's the reality check: To burn off the 250 calories in one 20-ounce soda, a 110-pound adolescent needs to run about 50 minutes, or walk about 5 miles, according to one analysis. And let's face it, most Americans don't regularly get this much exercise.

These numbers are not lost on the industry. And in recent years, beverage companies have warmed up to the idea of downsizing their serving sizes and calories.

In 2014 the American Beverage Association announced new commitments to increase efforts to market water and lower-calorie beverages. And just this week, Pepsi announced its goals to cut the sugar content and calories of drinks it sells around the globe.

But some critics say as long as the industry is trying to fend off taxes on sugary drinks, it is fighting against one of the most effective strategies to reduce consumption.

Siegel published a study in the American Journal of Preventive Medicine this month that finds that between 2011 and 2015, Coca-Cola and Pepsi lobbied against 29 public health bills that were intended to "reduce soda consumption or improve nutrition."

He argues their actions "call into question a sincere commitment to improving the public's health."

At the same time, Siegel's study documents how the soda companies have spent millions of dollars sponsoring U.S. health and medical organizations, including the American Heart Association and the American Diabetes Association, whose missions include fighting obesity.

"These companies use corporate sponsorship as a way to divert attention from their role in the obesity epidemic," Siegel argues. "So it's inconsistent with the mission of these [public health] organizations to be taking money from the soda companies."

The American Heart Association disagrees, pointing out that the money it has received from soda companies amounts to less than one-tenth of 1 percent of their total revenues. "That support is pretty fractional and certainly isn't in our view ... in a position to influence our policy," the AHA's Greg Donaldson told us.

It's clear that sponsorship from Coke and Pepsi has not stopped the American Heart Association from advocating for the passage of taxes on sugary drinks.

Earlier this year Nancy Brown, the CEO of the American Heart Association, wrote a piece in The Huffington Post titled Dear Big Soda: It's Time for a Change. "Our volunteers and staff are in every state capitol doubling-down against Big Soda," she wrote. And after the city of Philadelphia passed its tax, the AHA produced this video calling on other cities to follow Philly's lead.

The American Diabetes Association has also supported state and local taxes on sugar-sweetened beverages. In this statement, the ADA explains that grants from Coca-Cola have supported community education and outreach projects. For instance, in 2012, Coke gave $100,000 for Live Empowered, a diabetes awareness and prevention initiative aimed at African-Americans.

In the meantime, the beverage industry has also been laying the groundwork for what might come in a future White House administration.

Records show that Coca-Cola has given $5 million to $10 million to the Clinton Foundation. And emails released from WikiLeaks' hack of Hillary Clinton's campaign staff suggest that Coke was hoping for something in return.

Last spring, after it was reported that Clinton said she supported a tax on sweetened drinks in Philadelphia, a Coke executive fired off an email to a Clinton aide that read: "Really??? After all we've done. I hope this has been falsely reported." A follow-up strand of emails shows Coke trying to get the campaign to back off.

"The emails speak for themselves," says Siegel. "This is about as explicit as a company can get in basically saying, yes, these donations were intended to try to influence policy."

In a statement to NPR about that email exchange, a Coca-Cola spokesperson told us: "We were disappointed to learn that Secretary Clinton supported the beverage tax in Philadelphia. And "following her comments, we shared our point of view on this issue with the campaign."

The Clinton campaign told us that it does not have a position on any of the sugary-drink tax measures on the ballot in California this November.