Accessibility links
How Lipton Built An Empire By Selling 'Farm To Table' Tea : The Salt Lipton is just about synonymous with industrial Big Tea these days. So you might be surprised to learn that once upon a time, Lipton was known for selling tea direct from its own gardens.

How Lipton Built An Empire By Selling 'Farm To Table' Tea

How Lipton Built An Empire By Selling 'Farm To Table' Tea 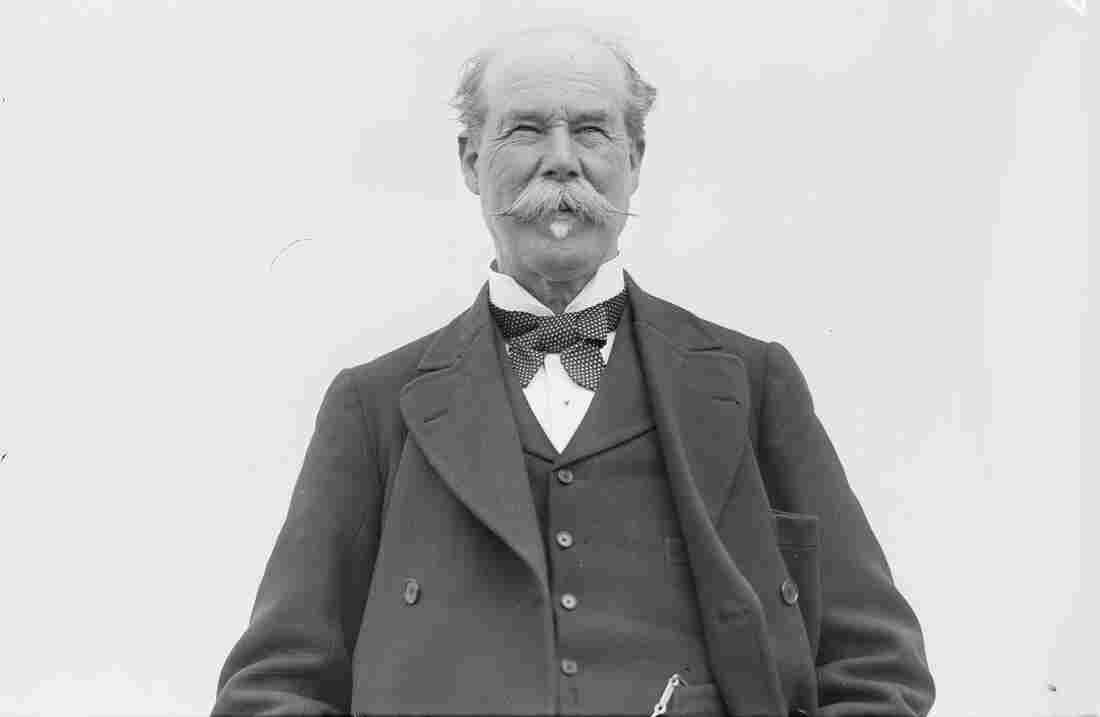 Sir Thomas Lipton in 1909. Lipton was already a self-made millionaire before he ever entered the tea trade. But by figuring out how to lower the retail cost of tea and standardize his product "direct from the tea gardens," he became much, much richer. Library of Congress hide caption 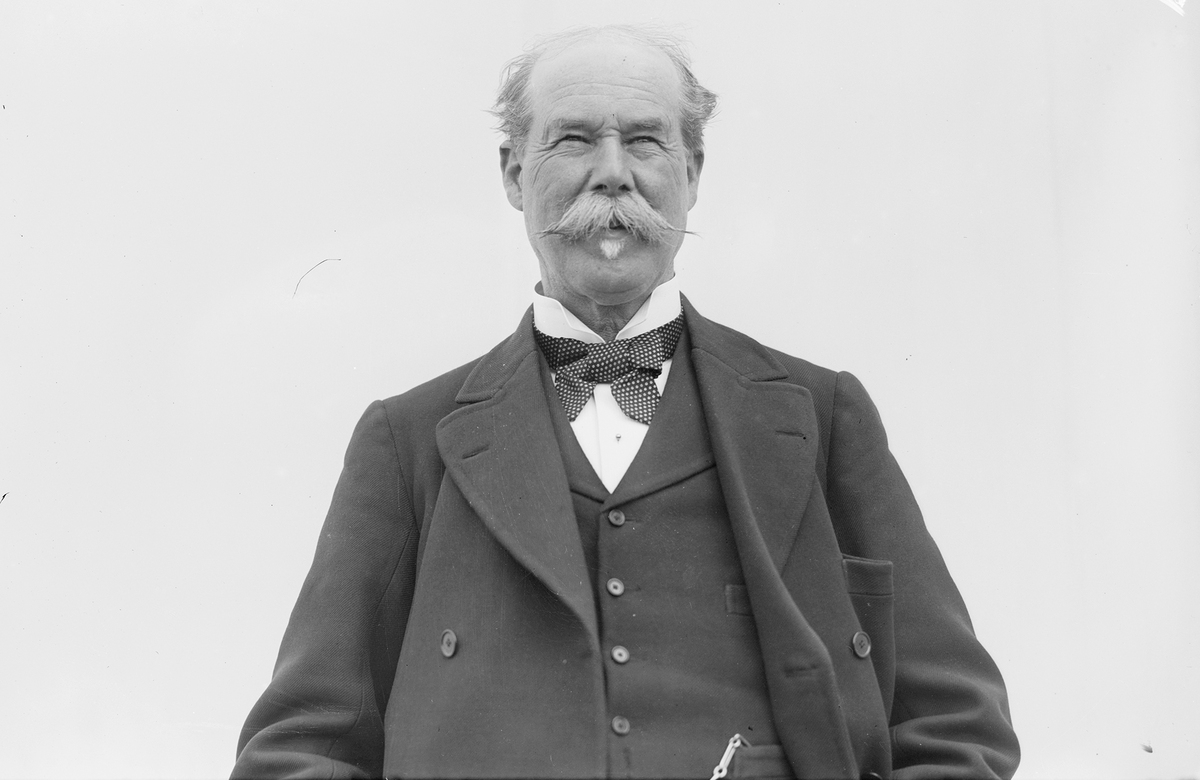 Sir Thomas Lipton in 1909. Lipton was already a self-made millionaire before he ever entered the tea trade. But by figuring out how to lower the retail cost of tea and standardize his product "direct from the tea gardens," he became much, much richer.

Lipton tea can be found in almost any grocery store, and the brand is just about synonymous with industrial Big Tea. So tea enthusiasts who sniff at the familiar square bags might be surprised that once upon a time, Lipton was known as the "farm to table" of the tea world. In fact, it was sold with the catchy slogan "direct from tea garden to tea pot."

So how did Thomas Lipton build this tea empire?

Lipton was already a self-made millionaire before he ever entered the tea trade. He was the Scottish-born son of an Irish grocer, and in Glasgow in 1871, he founded the first of a successful chain of grocery stores that made him a wealthy man by age 40.

But, in the British working classes, he saw an opportunity to get even richer. In the latter half of the 1800s, tea had become a popular drink among all British classes, but it was still somewhat of a household luxury. Shops were selling loose leaf tea for the equivalent at the time of 50 cents a pound, an amount he knew was beyond the means of a working-class family living on $10 per week. Lipton saw an opening: Why not cut out the middleman?

Tea Tuesdays: The Evolution Of Tea Sets From Ancient Legend To Modern Biometrics

Lipton thought he could slash the retail price of tea to an affordable 30 cents a pound — and still make a handsome profit for himself. At the time, tea brokers were making the largest returns. To lower the price, he would need to stop buying from them and grow his own tea. And that meant he needed land - a lot of it.

To thwart potential competitors, he booked a "vacation" to Australia, but secretly got off in Ceylon, now known as Sri Lanka.

Ceylon had been one of the world's greatest coffee producers. But in the late 1860s, a fungus arrived that obliterated that industry. Some planters fled, but others turned to tea, which proved to be an excellent replacement. 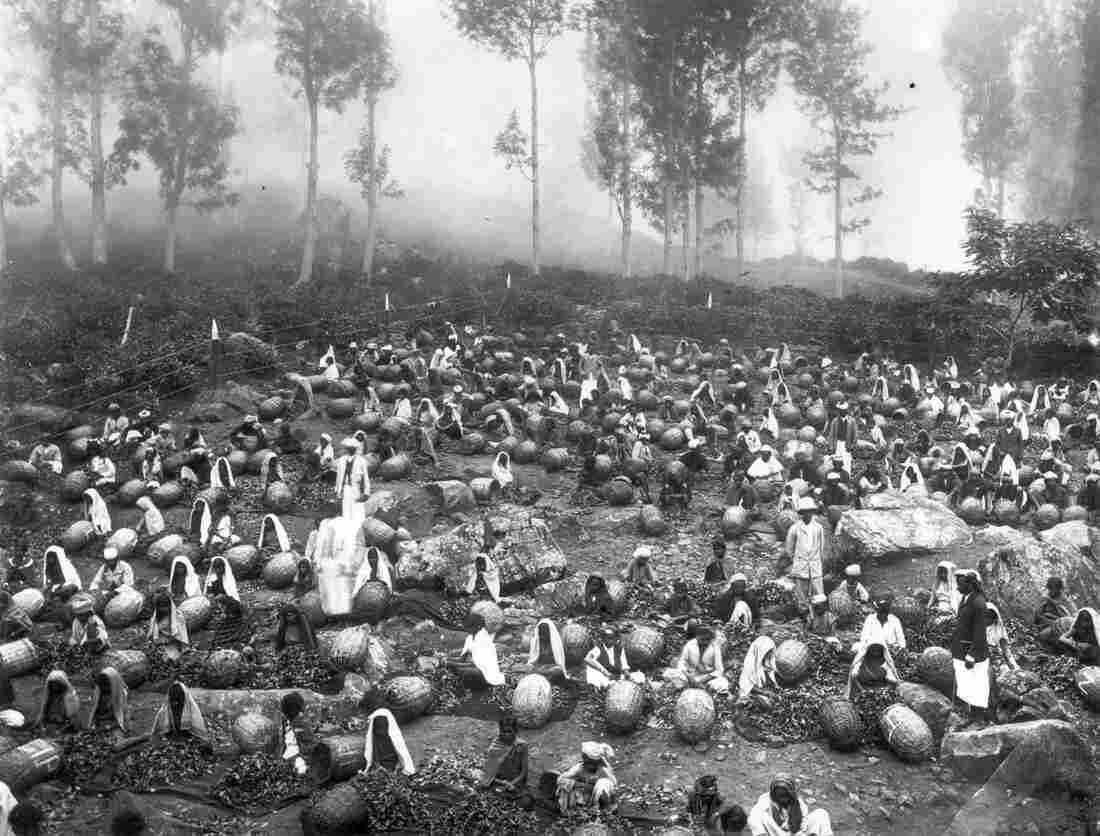 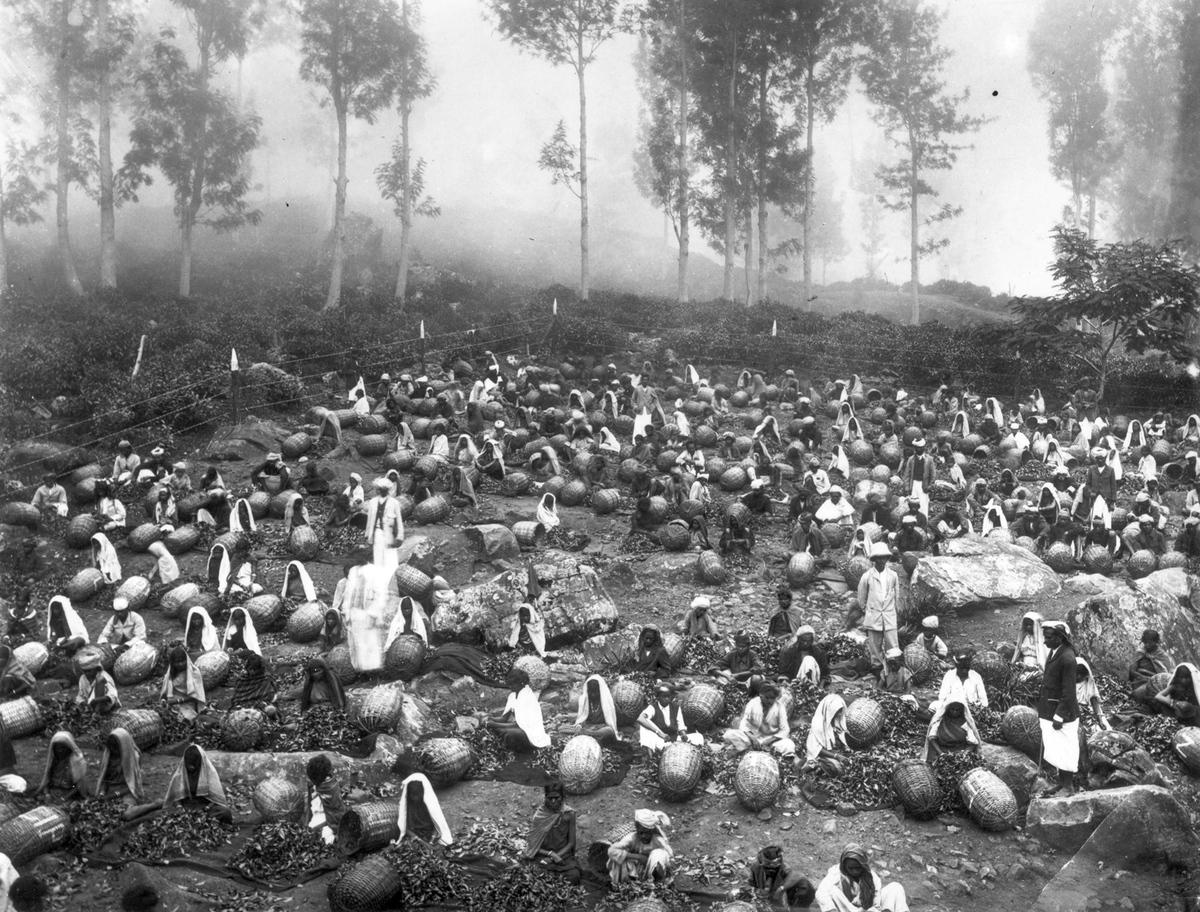 Baskets full of fresh tea leaves are sorted at a Lipton tea plantation in Ceylon circa 1900.

Tea grown in the island's central highlands had a rich, mellow flavor, bright and golden in the cup, and was proving popular at Mincing Lane, the London tea auction house. By the time Lipton arrived in June 1890, Ceylon was already exporting about 45 million pounds of tea per year.

But the island was still reeling from the collapse of the coffee industry, and land was going for fire-sale prices.

"You can buy estates here for a song," Lipton's agent told him.

Lipton snapped up five estates, and soon had about a dozen. He planted his own tea and installed machinery that could handle higher production. 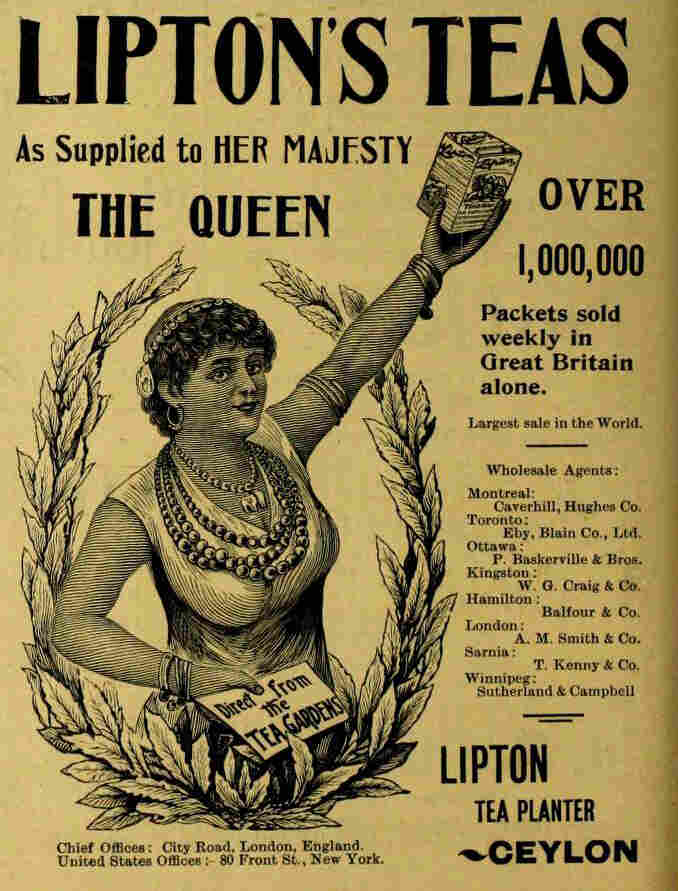 A Lipton ad from a Canadian grocer publication in 1896 boasts that the company's tea comes "direct from the tea gardens." Lipton traded on the idea that its tea was grown on the company's own estates. But as its tea grew in popularity, Lipton had to rely on outside brokers to meet demand. Internet Archive Book Images/Flickr hide caption 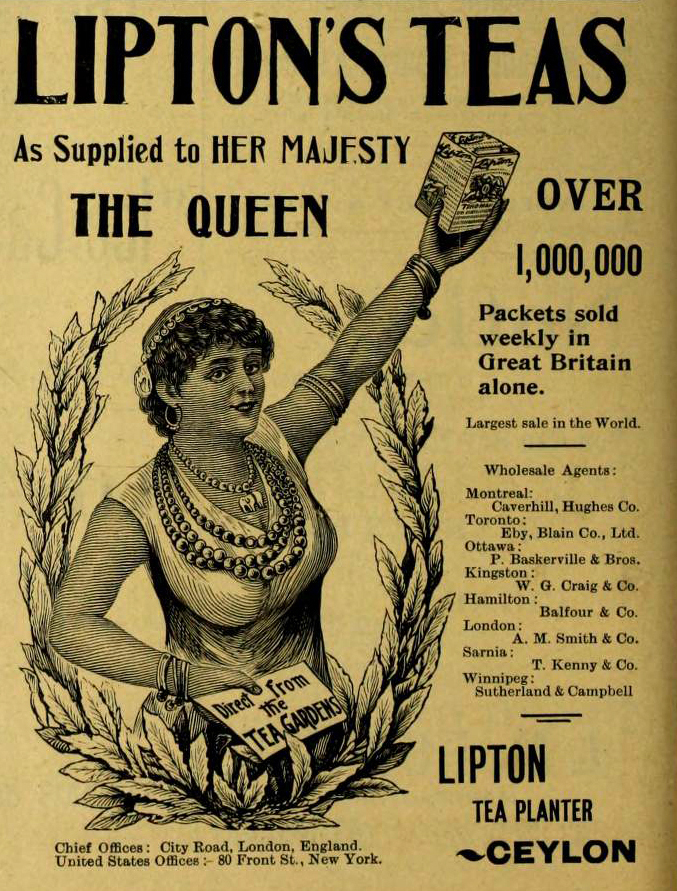 A Lipton ad from a Canadian grocer publication in 1896 boasts that the company's tea comes "direct from the tea gardens." Lipton traded on the idea that its tea was grown on the company's own estates. But as its tea grew in popularity, Lipton had to rely on outside brokers to meet demand.

Before Lipton, shop assistants measured tea by weight from wooden chests and folded it into paper packages. Lipton had the novel idea to sell it in premeasured packets of a quarter, half, and full pound. Standardization would be easier for shops to handle. Another big advantage: It would dispel any customer doubt on the accuracy of a shop's scale or the provenance of the tea.

"He really developed the first consistent brand of tea that was the same from package to package, from location to location, every time you bought it," Michael D'Antonio, author of A Full Cup: Sir Thomas Lipton's Extraordinary Life and His Quest for the America's Cup, told NPR in 2010. "And he priced it at half the price of other manufacturers, so it was a runaway hit."

Lipton became known for selling reliable product at affordable prices. Another advantage: Lipton could advertise his company directly on the packets. Initially they bore the image of a Tamil tea plucker and the aforementioned slogan: "Direct from tea garden to tea pot."

The packets were so successful that Lipton began selling his tea not just in his own shops, but through other retailers — in the U.K. and beyond. In 1893, he headed to the World's Fair in Chicago, where he sold 1 million packets of Ceylon tea.

Soon, Lipton's bright yellow label with its red shield was everywhere, and his tea became popular in America as well as the U.K. But that popularity meant that Lipton could no longer grow all the tea he needed to meet demand. He was forced to buy from brokers until only a small part of the tea came from his own estates.

"At a time when his dynamic sales and advertising methods, especially in the U.K. and America, were building up a turnover of millions of pounds of tea per year," D.M. Forrest noted in his authoritative A Hundred Years of Ceylon Tea: 1867-1967, "his 3,000 acres or so could not have supplied a tenth of his needs and he was soon buying and blending where and how he could, like all his major competitors."

But the "garden to teapot" public perception was already well-established: Lipton equaled tea, and Ceylon was its home.

Lipton "gave, or rather did not discourage, the impression that all his teas came from his own gardens," wrote Alec Waugh in Lipton: A Centennial Biography. But if that were true, "he would have needed to own half the island."

Lipton was a showman, and his commercial and marketing savvy drove his success. A master of the memorable stunt, in his early years, he had pigs paraded through the streets of Glasgow to his shop to underscore the farm freshness of his bacon. He heralded the first arrival of Ceylon tea with a brass band and bagpipe parade and for a time, printed Lipton Currency Notes.

Lipton is now a brand belonging to the colossal British-Dutch multinational Unilever. Its tea is sold in more than 150 countries. While the company does buy tea from Sri Lanka, it no longer owns any of its own gardens on the island. These were sold off — but not until after Lipton's death.

Jeff Koehler is the author of Darjeeling: The Colorful History and Precarious Fate of the World's Greatest Tea, which won the 2016 IACP award for literary food writing. Follow him on Twitter @koehlercooks.