Accessibility links
In Anthony Bourdain Cookbook, 'Appetites,' He Pleases The Toughest Food Critic (His 9-Year-Old) : The Salt Anthony Bourdain's new cookbook features comfort food he cooks for his young daughter. "She's who I need to please, and if she's not happy, I'm not happy," he says. 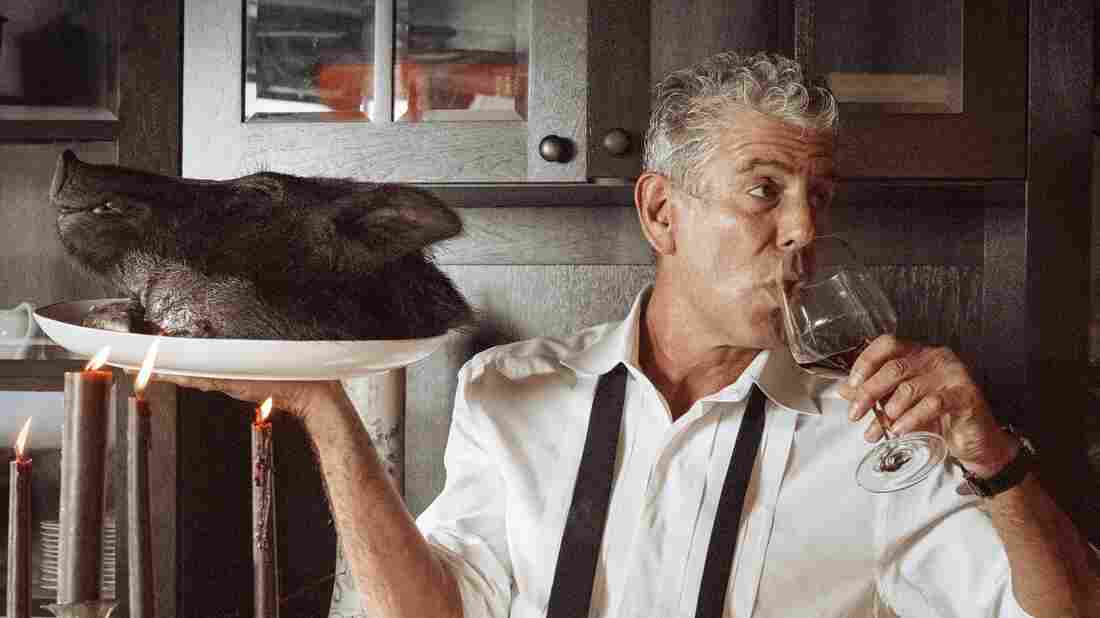 Anthony Bourdain spent decades in the restaurant business before discovering that he had a gift for writing and storytelling. His new cookbook, Appetites, features food he cooks for his 9-year-old daughter. Ecco hide caption 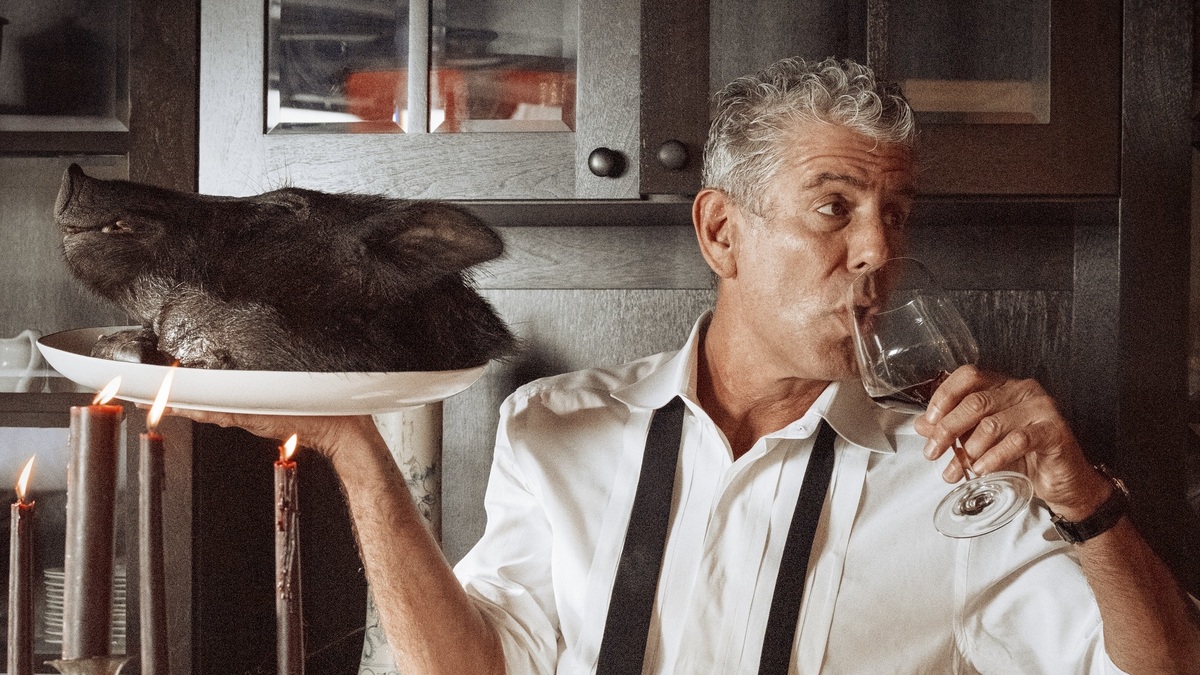 Anthony Bourdain spent decades in the restaurant business before discovering that he had a gift for writing and storytelling. His new cookbook, Appetites, features food he cooks for his 9-year-old daughter.

As the host of the Peabody Award-winning series Parts Unknown, Anthony Bourdain has visited conflict zones like Beirut, Congo, Gaza and Libya — places his CNN colleagues routinely cover. But Bourdain is clear that he doesn't want to be mistaken for a journalist.

"Journalists drop into a situation, ask a question, and people sort of tighten up," he tells Fresh Air's Dave Davies. "Whereas if you sit down with people and just say, 'Hey what makes you happy? What do you like to eat?' They'll tell you extraordinary things, many of which have nothing to do with food."

Bourdain says experiencing the everyday lives of people around the globe helps give depth to the news reports about those places. "I mean, who are these people we are talking about when we talk about Benghazi or Libya?" he says. "Is it not useful to see them with their kids, to see how their everyday lives are?"

So what does Anthony Bourdain eat when he's at home, being "ordinary"? During the course of his 16-year-long career in television, he has developed a reputation for trying just about anything — including unwashed pig rectum and rotten shark. But his new cookbook, Appetites, focuses on food he eats at home with his young daughter, including mac and cheese, burgers and some of his favorite Asian dishes, like Korean army stew.

"When I cook at home it's with a 9-year-old girl in mind," he says. "I mean, she's who I need to please, and if she's not happy, I'm not happy. The whole house revolves around her and her friends. So it's reflective of that." 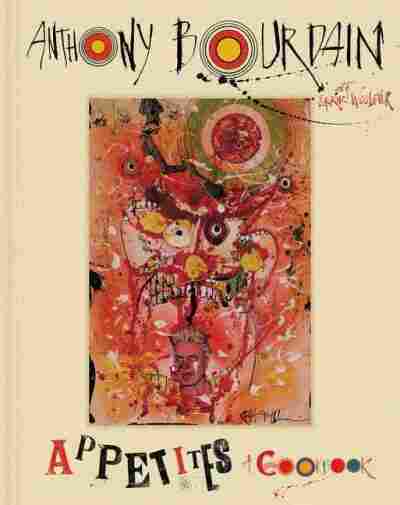 I wanted it to be useful, approachable, reflective of the life I've lived over the past eight or nine years as a father, as opposed to a professional trying to dazzle with pretty pictures and food that's different than everybody else's. ... I wanted to make a beautiful cookbook, [a] creative-looking one, spoken in honest, straight-forward, casual terms that gives the reader reasonable expectations, that encourages them to organize themselves in the way that I've found to be useful as a professional.

It's also reflective of, I think, age, and all those years in the restaurant business. Most chefs I know after work do not want to go out to dinner and be forced to think about what they're eating in a critical or analytical way. They want to experience food as they did as children, in an emotional way. The pure pleasure of that bowl of spicy noodles or even a bowl of soup that their mom gave them on a rainy day when they'd been bullied in school. I mean, that's a happy time when you can escape this world and lose yourself in food. These are recipes where hopefully, I try to evoke those feelings and emotions. 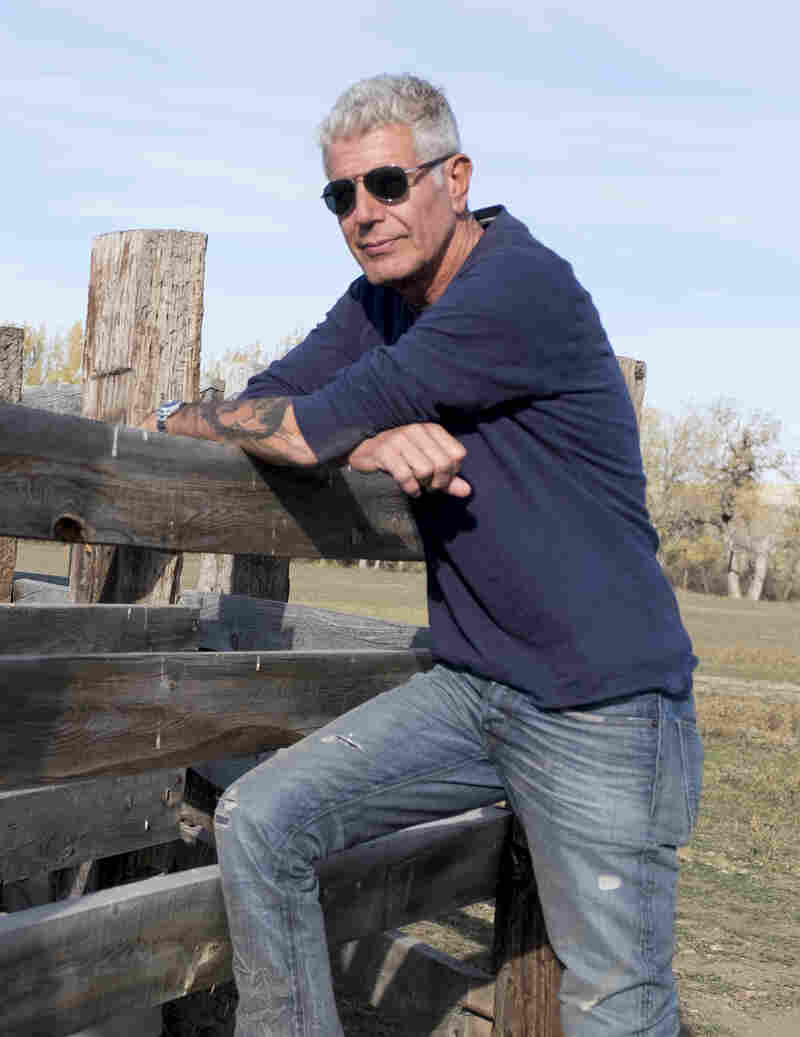 Bourdain began his career as a dishwasher, and jokes that he learned "all the most important lessons" of his life scrubbing dishes. David Scott Holloway/Ecco hide caption 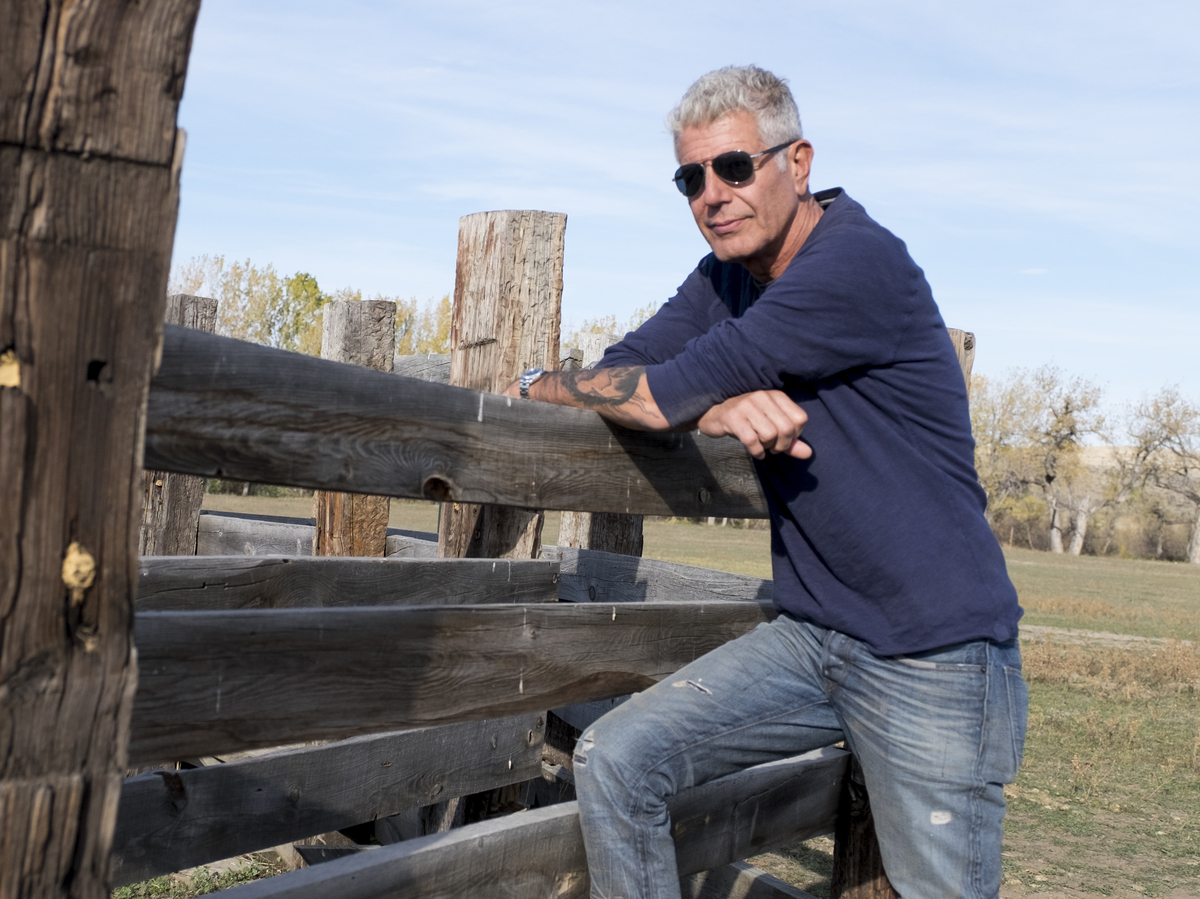 Bourdain began his career as a dishwasher, and jokes that he learned "all the most important lessons" of his life scrubbing dishes.

I started working as a dishwasher one summer and it was really a big event for me, because up to that point I was lazy. I was the kid that if you hired me to shovel your walk in winter, I would really do a terrible job of it, probably find a way to weasel out. ...

The kitchen brigade [were] the first people whose respect I wanted, and the first time in my life that I went home feeling respect for myself. It was very hard work. You had to be there on time. There were certain absolutes, certain absolute rules, and for whatever reason I responded to that. ...

I was a happy dishwasher. I jokingly say that I learned every important lesson, all the most important lessons of my life, as a dishwasher. In some ways that's true. Thomas Keller, the great chef, talks about ... the magic of discovering that you line the dirty dishes up, you push them in the machine, and they come out clean every time. There's something very comforting about that. ... I still like being at the bottom of a steep learning curve. I liked being the worst in the kitchen and struggling every day to earn respect and status within that hierarchy.

On writing his first cookbook, Kitchen Confidential, and finding his writing voice

I think, to a great extent, the reason Kitchen Confidential sounds like it does is I just didn't have the luxury or the burden of a lot of time to sit around and contemplate the mysteries of the universe. I had to wake up at 5 o'clock in the morning, write for an hour and a half, and then I had to go to work to a real job. ...

It was liberating in the sense that I had no time to think about what I was writing. I certainly had no customer or reader in mind, because I was quite sure no one would ever read it. That was in many ways a very liberating place to be. I've kind of tried to stick with that business model since.

That first time I don't think I had ever killed an animal before. I had been ordering them up as a chef over the phone, so I was culpable in the death of many animals. But here I was being asked to physically plunge a spear into the heart of a pig. It seemed to me the height of hypocrisy, however uncomfortable I might've been with that, to put it off on somebody else. I had been responsible for the death of many animals. Here I'm being asked, I didn't want to let the team down. I didn't want to dishonor the village or embarrass anyone.

The first time was very, very, very, very difficult. My camera guys almost passed out, it was certainly very difficult for me. The second time, as much as I'd like to say that it was still really hard, and I think I said in the voiceover, I don't know what it says about me, probably something very bad, that I have become — I have changed over time. I'd like to think in good ways, for the most part, but I've also become more callous. I've become able to plunge a spear into the heart of a screaming pig and live with that much more comfortably than I did the first time.

On finding great neighborhood places and hearing reactions from locals

Ideally I'll go to a place, like I'll find a little bar in Rio, let's say, some little local place that perfectly expresses the neighborhood. It's not a tourist-friendly place, for lack of a better word, I hate this word but I'll use it anyway — "authentic." I'll feature that on the show.

The response I'm looking for is to hear from someone from the neighborhood saying, "How did you ever find that place? I thought only we knew about it. It's truly a place that we love and is reflective of our culture and our neighborhood."

But on the other hand, it's kind of a destructive process because if I name the place — and I don't always when it's a place like that — I change it. The next time I go back, there's tourists. There're people who've seen it on the show. Then I might hear from the same person from that neighborhood saying: "You ruined my favorite bar!" All the regular customers have run away and it's filled with tourists in ugly T-shirts and flip-flops.

On food he hesitates to eat

If freshness and hygiene is a question, generally it's tribal situations that are problematic, where the whole tribe, the chief is offering you something that's what they have. Often they don't have refrigeration, it's often old — their tolerance for meat that's even spoiled is higher than [that of] my relatively sensitive stomach. Often these dishes are eaten in one large bowl with the whole tribe jamming their fingers in. So yeah, rotten food, food that's clearly not clean, water that's clearly not good — those are a challenge.

On the flavor spectrum, I'm pretty good with just about everything. ... When you get to, like, rotten shark in Iceland, I mean I could do it, but I'd rather not. Won't be doing that again. It's unpleasant but it's not the end of the world. I don't know, for sheer soul-destroying misery, if you're talking about a bite of food that just makes me question the future of the human race and sends me into a spiral of depression, I think eating an airport Johnny Rockets pretty much would be the nadir.

... if you're talking about a bite of food that just makes me question the future of the human race and sends me into a spiral of depression, I think eating at an airport Johnny Rockets pretty much would be the nadir.

I've lost three days of work in 16 years ... only three days that I've been down for the count and confined to bed and desperately, horribly ill. Generally speaking, if it's, like, a street-food stall that's busy, even if it looks dirty as hell, if there are a lot of locals there and they're eating and they're happy, my crew will always eat at that place. Eating a Caesar salad at the major chain hotel in Central Africa or the Middle East, that's where you run into trouble, stomach-wise, generally.

On losing interest in fine dining, because of his love of street food

I'm happiest experiencing food in the most purely emotional way. And it's true of most of my chef friends as well. When it's, like, street food or a one-chef, one-dish operation, or somebody who's just really, really good at one or two or three things that they've been doing for a very long time, that's very reflective of their ethnicity or their culture or their nationality — those are the things that just make me happy.

I'm spoiled, like a lot of fellow chefs. We get a lot of fine wines and dinners thrown our way and you do reach this enviable point where you just don't want to sit there for four hours, with course after course after course. It's too much, first of all. It doesn't feel good at the end of that time, and it's not interesting. And if the waiter is taking 10 minutes to describe each dish [and] it'll only take you three to eat it, something's really wrong. I think people lose sight of the fact that chefs should be ultimately in the pleasure business, not in the look-at-me business.