Accessibility links
Porridge, The Food That Built Empires, Stages A Savory Comeback : The Salt Globally, this humble dish was one of the first ways humans learned to unlock the nutrition in grains. Now, chefs are embracing its sumptuous, delicious possibilities. And no, it's not just oatmeal.

Porridge, The Food That Built Empires, Stages A Savory Comeback

Porridge, The Food That Built Empires, Stages A Savory Comeback 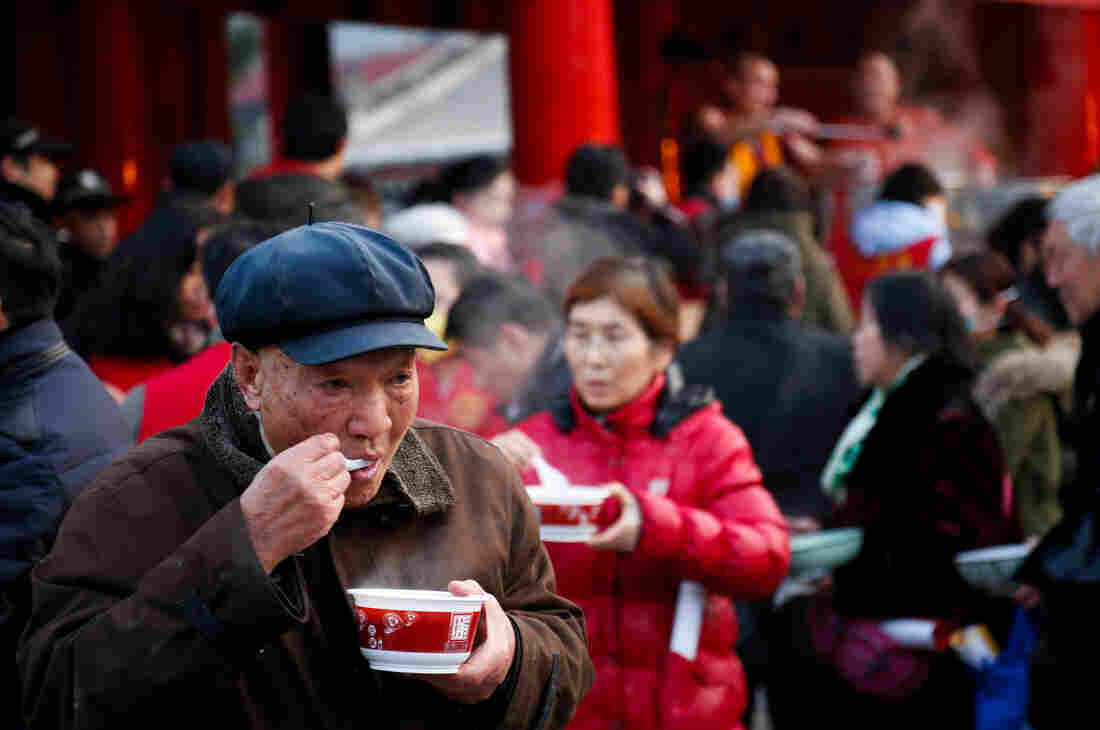 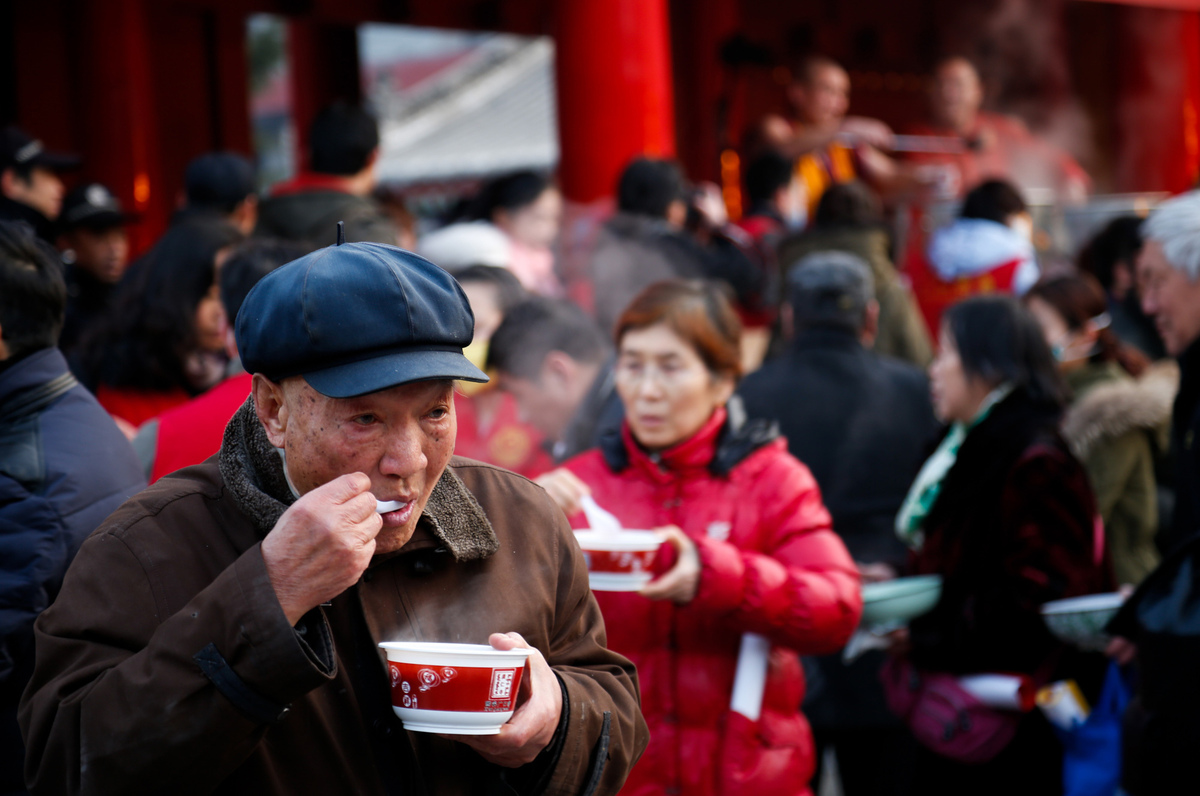 Citizens eat Laba congee, or rice porridge, at Guangren Temple at the Laba Festival, a traditional Chinese holiday, in Xi'an, Shaanxi Province of China. Cultures around the world have long embraced porridges.

Gruel, glop, cooked mush. The English language has been less than kind in describing porridge. Which seems a tad ungrateful, really, considering that grains cooked in water or milk fed our earliest civilizations.

But now, this stalwart dish is staging a culinary comeback.

"Porridges today can blow you away with their color, flavor and texture," explains Maria Speck, award-winning author of Ancient Grains for Modern Meals and Simply Ancient Grains.

She soaks bulgur wheat in pomegranate juice to saturate it with burgundy color, then serves it with blueberries and orange-blossom water to tantalize the taste buds and eyes. 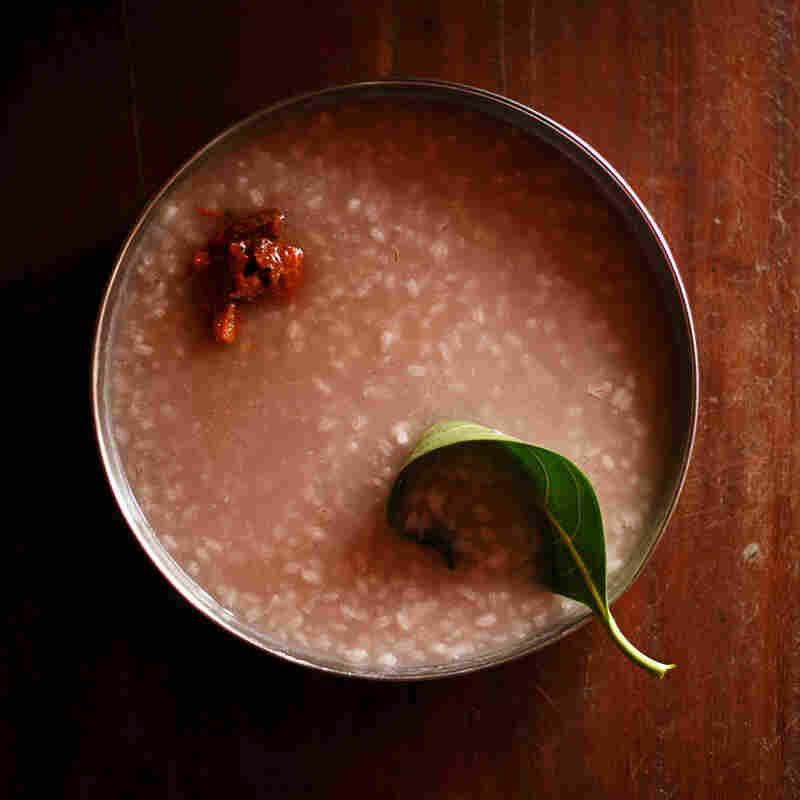 "These days," she says, "we are adventurous eaters who want culinary creativity in our porridges."

This new paradise of porridges has emerged, says Speck, because of the popularity of gluten-free foods and heirloom grains. Culinary technologist Nicholas Ahrens, of Bay Street Milling, which provides flours and grains to commercial bakeries, agrees.

"The broad interest in paleo-style diets," he says, "has had a huge influence on porridges. People want to go back to the original seeds and grains in their untouched form. When you can see the fully articulated grains in your bowl, you feel reassured that you what you're eating is genuine, simple and clean."

The most humble and universal of dishes, porridge has always had a quality of "everyday sumptuousness," says University of South Carolina historian David Shields, author of Southern Provisions: The Creation and Revival of a Cuisine.

Porridge Aficionados Vie To Make Theirs The Breakfast Of Champions 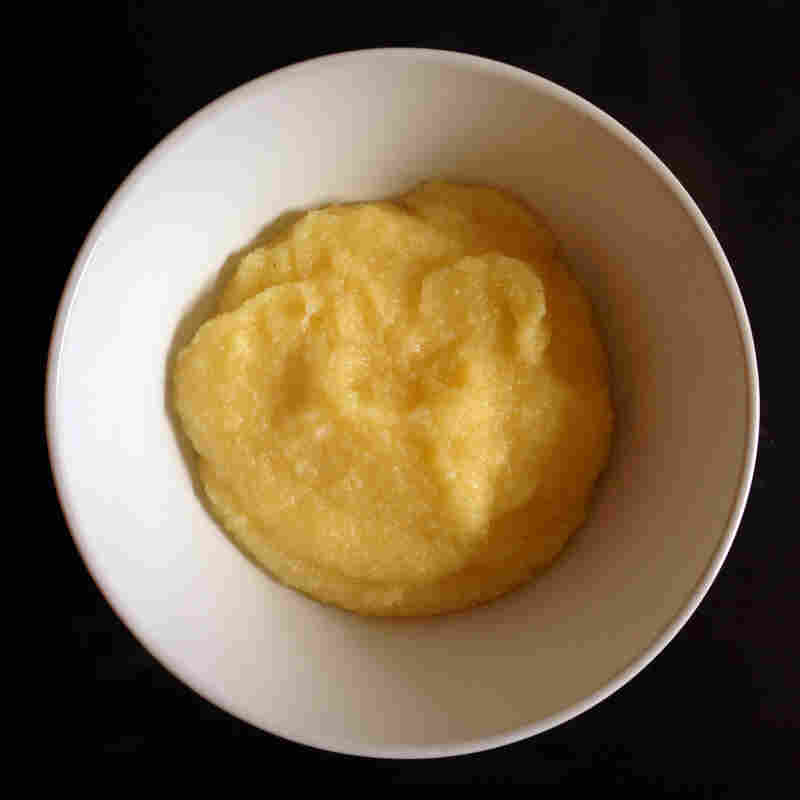 Cooked in milk or water (depending on the culture), porridge was our first and simplest way of cooking grains to release the incredible burst of nutrition and flavor locked inside.

Shields says porridge is "the dish where the flavor of heirloom grains was first registered and then refined in cultures around the world." We cultivated favored varieties of grains that would make the tastiest, most nutritious porridges.

Take Asia's breakfast porridge, an unadorned dish of rice boiled in water or stock. The fragrance, appearance, and flavor of the rice varies according to the country. In China, it's known as congee; in Japan, it's okayu; in Korea, juk, and in Thailand, jok, to name but a few.

The Japanese and the Koreans regularly eat a slightly glassy medium or short-grain sticky rice. The Chinese prefer a non-aromatic long or medium grain rice. The Vietnamese and Thai favor fragrant jasmine rice or long-grain sticky rice. Bhutanese like a slightly sticky red rice, and Northern India produces famous and deliciously aromatic basmati rice. All to be served simply at least once a day.

Porridge is also the dish upon which many ancient city-states built their empires. We may take grains for granted today, but to early societies, they were fundamental to survival.

A Holy Land Christmas Porridge Honors A Damsel In Distress

Grains, says Rachel Laudan, author of Cuisine and Empire — a sweeping chronicle of the rise and fall of the world's great cuisines — sustained empires because they were powerhouses of nutrition, relatively quick to plant and harvest (unlike fruit and nut trees), easily stored in cold, drought, or rain, and capable of feeding armies.

"The early Romans built their empire on barley porridge," she says. "The Chinese built theirs on rice porridge, the Indians on rice and lentil porridge."

The list of prolific porridges is long, says Laudan: In Scotland, barley was the base; in America, corn grits; in Asia, rice; in Norway, rye; in Africa, millet. Corn or millet polenta was the dish of Italian peasants. 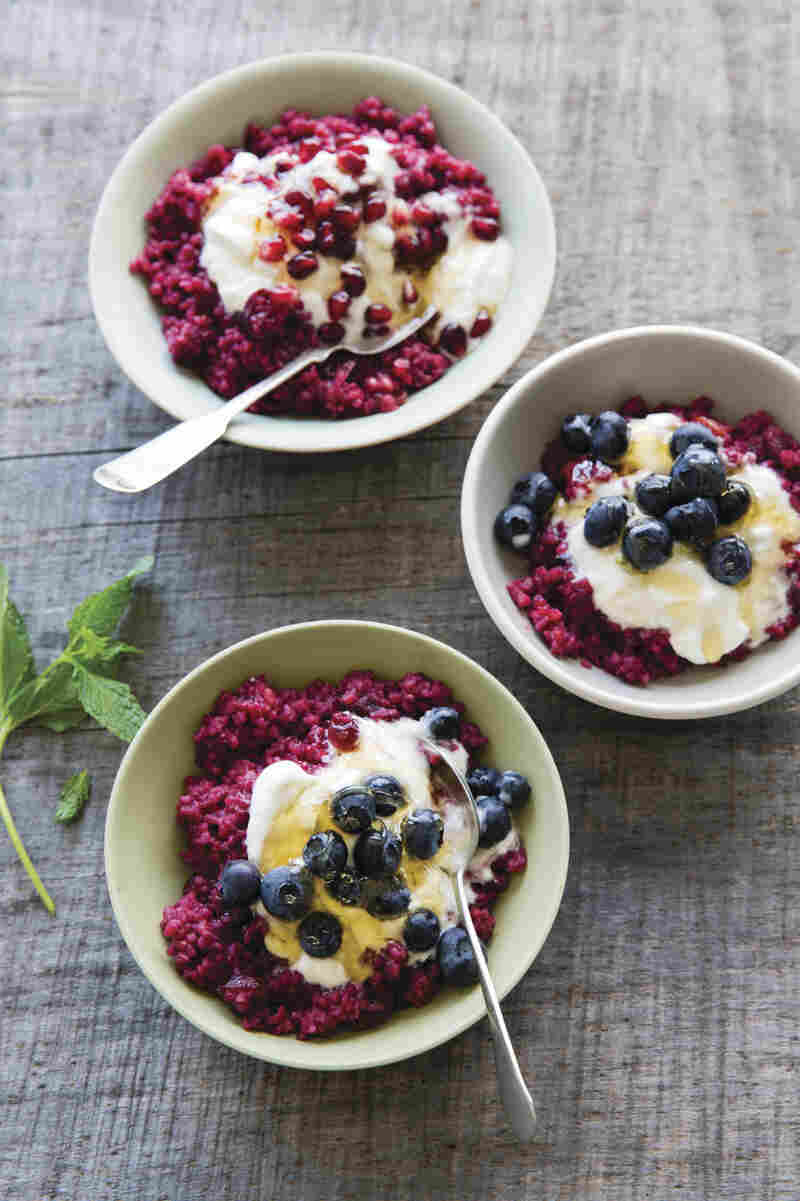 Food writer Maria Speck soaks bulgur wheat in pomegranate juice to saturate it with burgundy color, then serves it with blueberries and orange-blossom water to tantalize the taste buds and eyes. Penguin/Random House hide caption 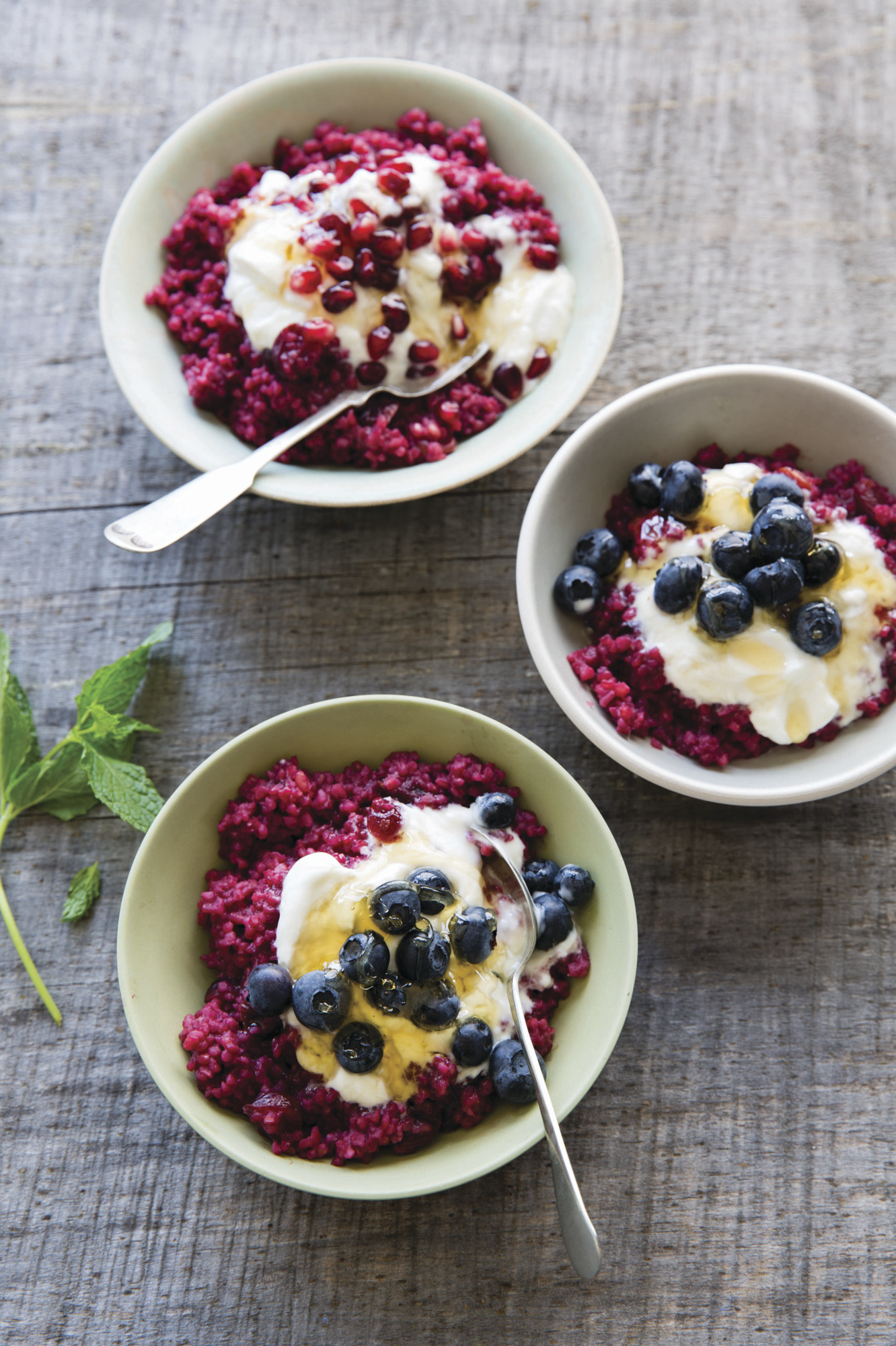 Food writer Maria Speck soaks bulgur wheat in pomegranate juice to saturate it with burgundy color, then serves it with blueberries and orange-blossom water to tantalize the taste buds and eyes.

Today, porridge can be as versatile as you wish. Whether they are creamy, nutty, spicy, or sweet, the porridges emerging today are a palette upon which chefs paint a rainbow of colors and contrasting flavors.

Award-winning food writer Marlena Spieler lets her plain oatmeal cool overnight into a firm gel. "I slice it up and smear a spoonful of firm, whipped honey at one end and a drizzle of homemade Chinese Chile oil at the other end of each slice," she says. "Then I eat each end in alternating bites. I like the juxtaposition of hot, sweet, and oaty. And I love the contrasting textures—the thick, solid honey is so strikingly different from the smooth oil."

Cookbook author Mridula Baljekar reports that masala oats are now more popular than ever in India. She cooks hers in coconut milk, or a blend of milk and water, and blends them with masala spices usually meant for rice: "It contains carrots, peas, green beans, dried onion flakes, garlic, ginger, chili, cardamom and cinnamon. Vegans can cook it in almond milk."

Porridge can also be easily transformed into other dishes. Baljekar turns her oatmeal masala into spicy oat pancakes, using milk, egg and fresh cilantro. "I love it with a dollop of Greek yogurt and some fresh blueberries on top." The same goes for polenta, which can be cooled down the next day and grilled or fried.

"Porridge is incredibly versatile," says Laudan, "and forgiving. You can stretch it with extra water or milk, or add a bit of meat or fish and make a pottage. The classic shrimp and grits is really a pottage."

But on occasion, you may just want to revert to utter, shining simplicity, like the porridges of old, the ones that sustained us as our civilizations evolved.

"I like to place before them a bowl of perfectly cooked Carolina Gold rice grits with butter and benne [the South's unique sesame seed] on top," he says. "Carolina Gold is an heirloom Southern rice that is delicate and starchy, but when it's broken into grits, something special happens. A nutty, floral flavor emerges. It's a magical combination — the rice grits, the nuances of hay and truffle in the benne seed, and the melted butter."

Stanhope also cooks the rice grits as a risotto, so they pour onto the plate like a polenta. And thus, at one of the finest restaurants in Charleston, a simple Southern rice porridge harkens back to a centuries old, daily Asian staple — congee — that sustained people 4,500 years ago.

3 cups broth of choice: chicken, vegetable, as you like

Black pepper to taste, and salt only if needed (both broth and cheese could be salty)