Accessibility links
Discovering The Science Secrets Of Sourdough (You Can Help) : The Salt Many bakers treat their sourdough starters like a family heirloom. Some starters date back decades, even centuries. Now researchers want to analyze your starters to unlock their flavor secrets.

Discovering The Science Secrets Of Sourdough (You Can Help)

Discovering The Science Secrets Of Sourdough (You Can Help) 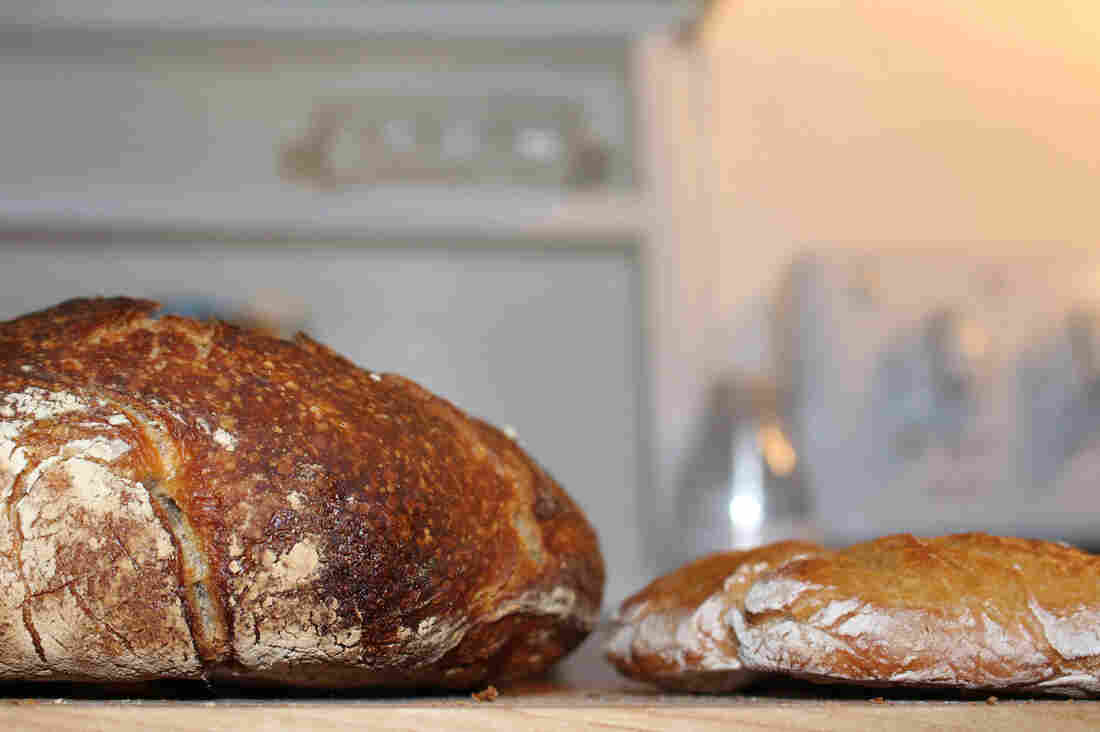 The loaf on the left was made with a starter; the sourdough loaf on the right wasn't. Researchers are soliciting home bakers to submit their starters for DNA analysis. The goal is to assemble a census of sourdough biodiversity and analyze variations in pH levels, enzyme production and other aspects of its biochemistry. Courtesy of Lea Shell/Sourdough Project hide caption 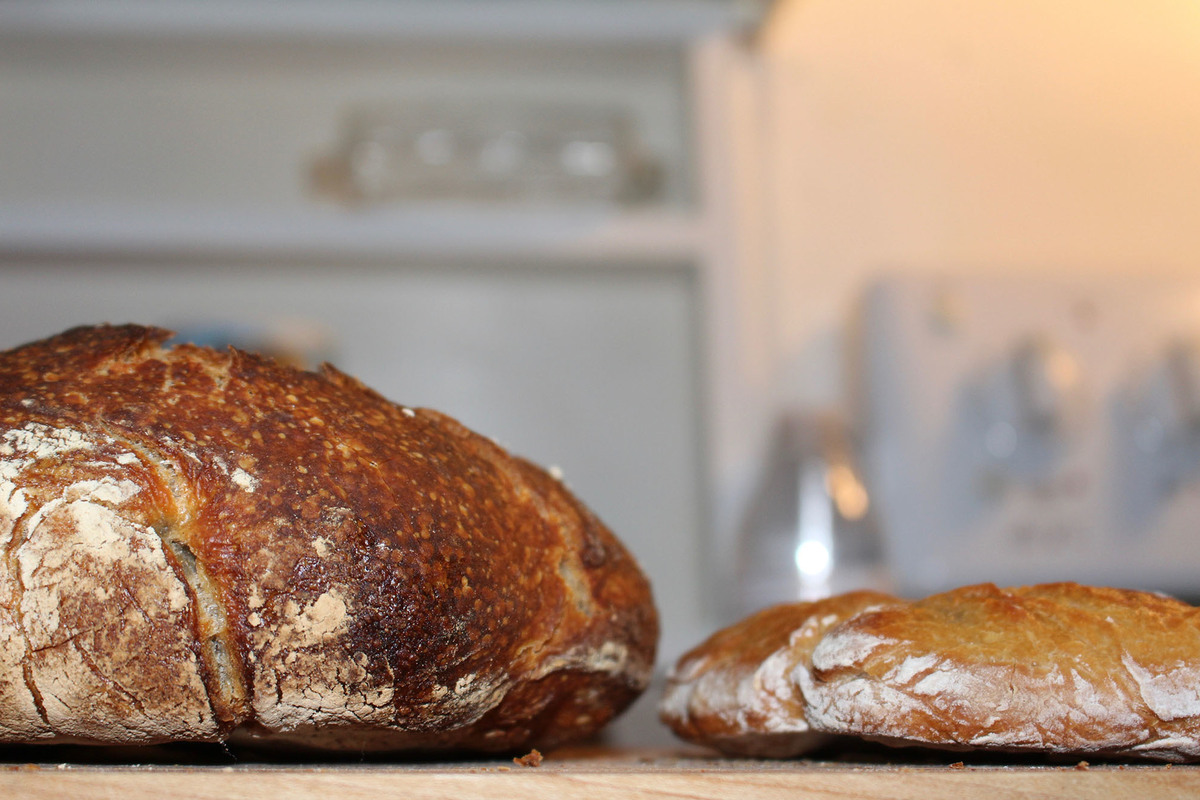 The loaf on the left was made with a starter; the sourdough loaf on the right wasn't. Researchers are soliciting home bakers to submit their starters for DNA analysis. The goal is to assemble a census of sourdough biodiversity and analyze variations in pH levels, enzyme production and other aspects of its biochemistry.

Those first bubbles were almost a revelation. A couple of days before, I had mixed together flour and water into a paste. But now pockets of gas percolated through that seemingly inert glob. It was breathing. It was alive.

This gloppy mess, exuding a whiff of vinegar, was my nascent sourdough starter. When mature, it would be a pungent brew of yeasts and bacteria, a complex ecosystem that would hopefully yield delicious loaves of sourdough bread.

As the microbes eat the sugars in the flour, they exhale carbon dioxide, producing the bubbles that turn a flat, dense loaf into something light and fluffy. A starter breathes life into bread. If the loaf is the body, the starter is the soul.

Within is something magical and mysterious. Passed down through generations, starters carry tradition, history and nostalgia. People give them names like Lazarus and Clint Yeastwood. They deliver layers of flavors and aromas, the products of countless microorganisms — some whose identities and activities remain undiscovered. 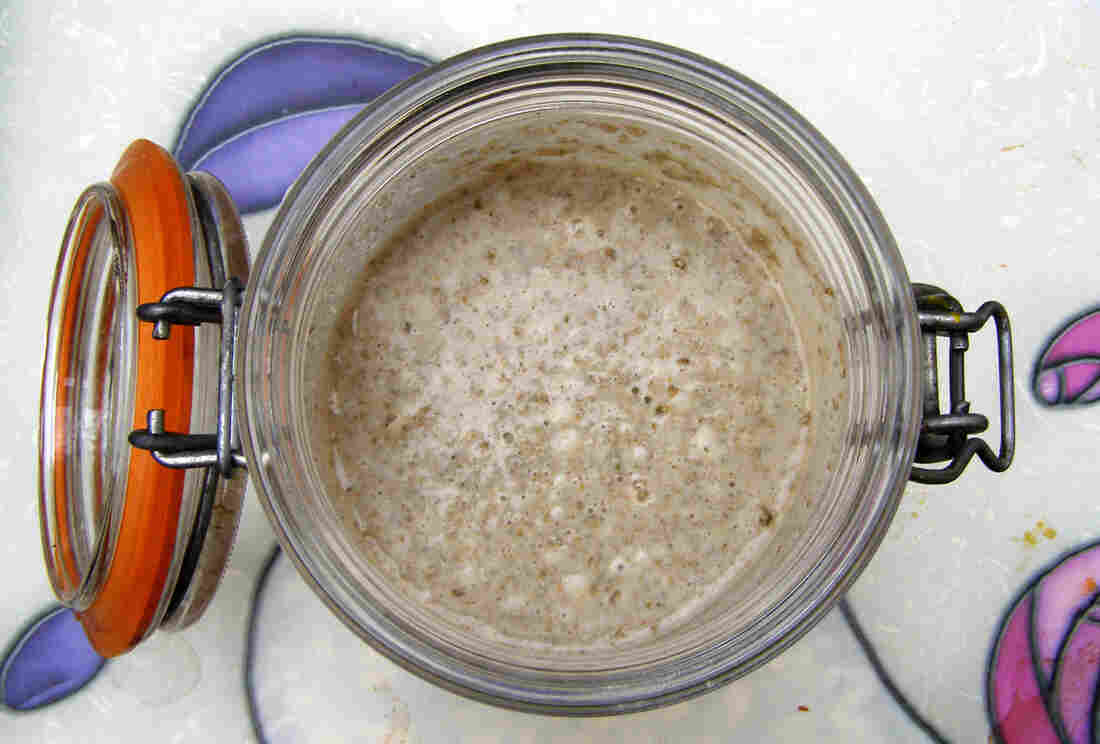 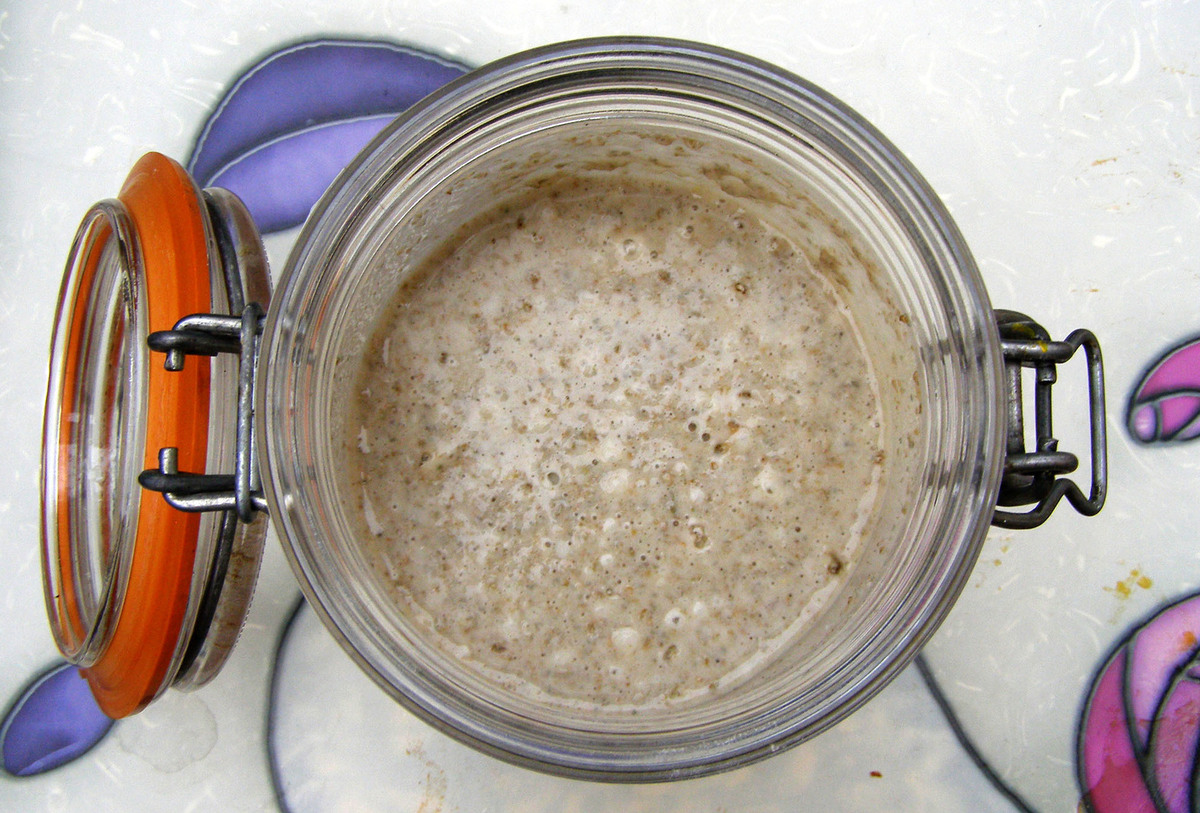 Sourdough starter that is 2 days old.

When I made my starter last January, I unknowingly joined a growing trend. More home bakers are now eating and baking sourdough, popularized by professionals like Chad Robertson of Tartine in San Francisco. (He and others have also been experimenting with new types of grains, milling their own heirloom and ancient varieties for flavor and nutrition.)

Love Your Sourdough Starter? In Stockholm, You Can Hire A Sitter For It

According to sourdough lovers, its advantages are three-fold. The bread lasts longer, thanks to microbes that produce acids and antibiotic compounds, preventing spoilage. Evidence also suggests sourdough is better for digestion. And, most importantly, it tastes better.

But there's nothing new about sourdough. It has been around for millennia, since the first bakers — perhaps in the Middle East — noticed that, after a couple of days, their gruel of grains and water started to bubble. Nearly all leavened bread in the world came from sourdough: from the French baguette to the Chinese mantou, from East African injera to the famous San Francisco sourdough, developed at Boudin bakery in 1849. Sourdough doesn't have to be sour, and the term simply refers to any bread made from wild yeasts and bacteria.

Today's store-bought bread relies on commercial yeast, a single species called Saccharomyces cerevisiae. Food scientists first isolated and developed it in the 19th century for its consistency and fast-rising times. But not taste.

Sourdough starters, though, vary widely. You can make and maintain one with only wheat flour and water. Others use ingredients like rye flour, milk, grapes or potatoes.

While packaged, commercial yeast can sit in your cupboard for a couple of years, a sourdough starter is more like a pet or a high-maintenance houseplant. You have to feed it regularly, or, if you're away, check it into a sourdough hotel. Properly maintained, a starter can live indefinitely, and some have purportedly persisted for centuries. 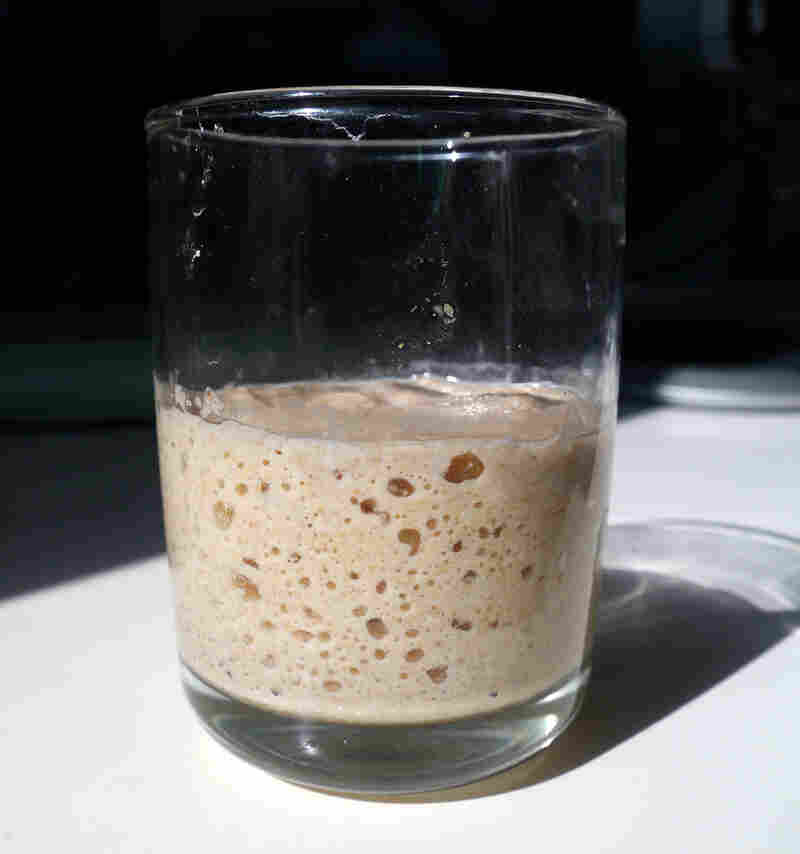 The author's starter showing the bubbles starting to form. Woo first mixed it up on Jan. 20, 2016, and has maintained it since. In this photo, the starter was close to its peak. Marcus Woo for NPR hide caption 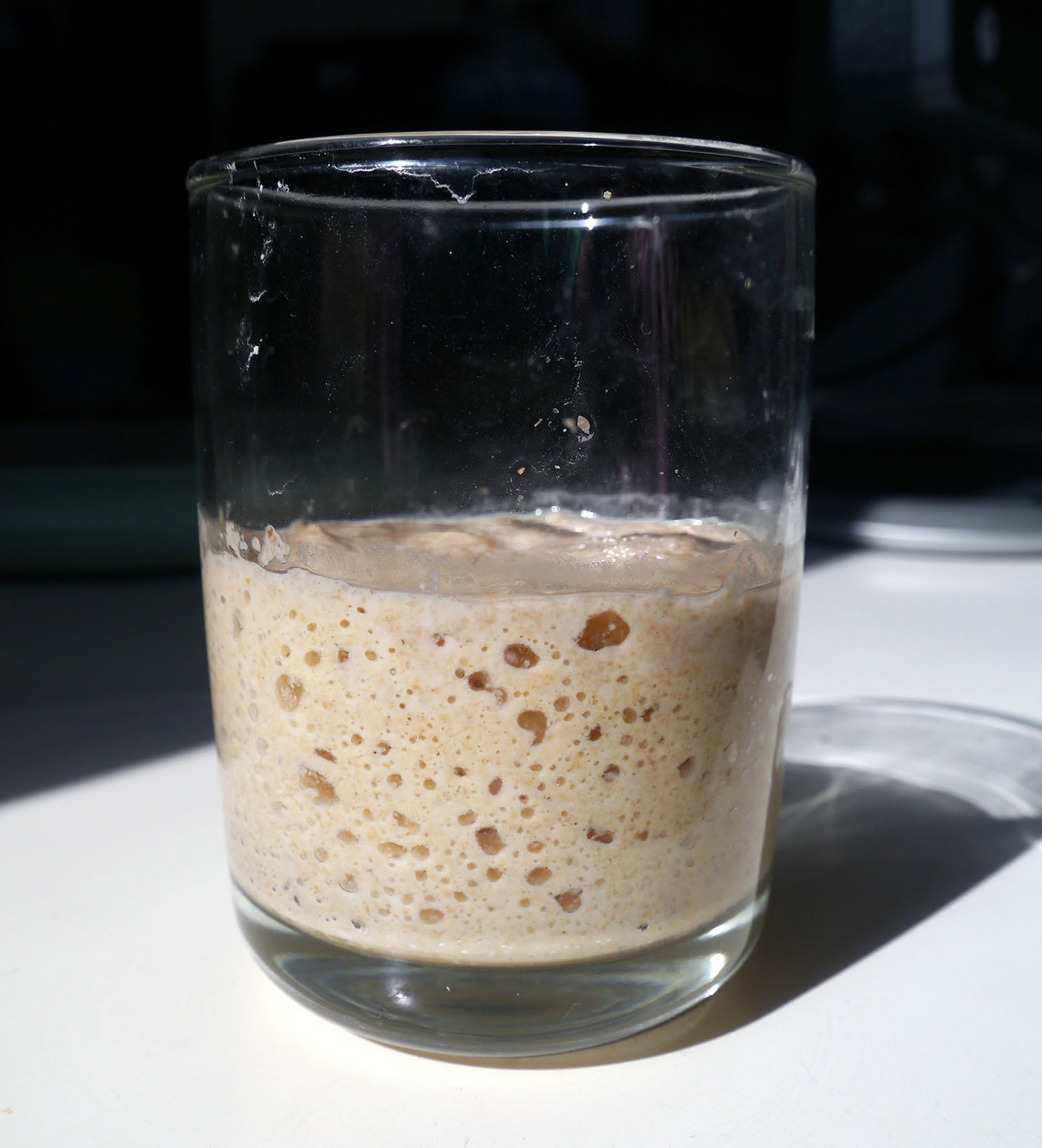 The author's starter showing the bubbles starting to form. Woo first mixed it up on Jan. 20, 2016, and has maintained it since. In this photo, the starter was close to its peak.

For Rachel Poulsen's family, a sourdough starter — fed with flour and evaporated milk — was important enough to serve as a wedding gift, passed down two generations starting from her great-grandfather, Leo V. Jolley Sr. He first got the starter from a sheep camp in Provo, Utah, which likely got it from Mormon settlers in the late 1800s. Her mom made sourdough pancakes every Sunday. "I almost feel like I'm addicted to sourdough," says Poulsen, who now lives in East Palo Alto, Calif. "I can keep eating them; I crave them."

Carina Westling of Brighton, U.K., got her rye starter 25 years ago in Sweden from a friend. Her friend's family had taken it with them when they fled Estonia in World War II, the starter being vigorous enough to have eaten through its bag during the journey. Before then, the starter had been in the family for perhaps more than 150 years. "It's not my tradition, but I've been honored to carry a part of that tradition forward," Westling says.

The family starter was one of the few things Liz Terhune packed in her car when she moved across country to Las Vegas. "It's a family heirloom to me," she says. "It's more important to me than things." Her great-aunt, who got the starter in the 1950s from a crab fisherman in Alaska, used to make sourdough pancakes for her and her sister during the summer. The starter likely originates from at least the late 1800s, Terhune says.

If you want a starter with a unique pedigree, you can buy it from places like Sourdough International, which has collected starters from bakers around the world, from Saudi Arabia to New Zealand. Each one, the company says, features its own distinct flavor.

Some say a starter's microbial community changes — and so does its flavor— once you bring it to a different environment. "There's no reason for people to go chasing special pedigrees," says Sandor Katz, author of the Art of Fermentation. "It's going to be all about what you feed it and the technique of how often you're feeding it."

The truth is, no one knows for sure, says Rob Dunn, a biologist at North Carolina State University. Lab experiments have revealed the basic biochemistry of sourdough, but no one has yet explored the diversity found in the real world.

"What food scientists have mainly been about is the average story, but not understanding the variation — even though what eating is about is the beauty of that variation," Dunn says. "We know enough to ask really good questions, but we don't know enough to know the answers."

That is why Dunn is starting the Sourdough Project. He and other researchers are soliciting home bakers to submit their starters for analysis. By sequencing the starters' DNA, the researchers can assemble a census of sourdough biodiversity and analyze variations in pH levels, enzyme production and other aspects of its biochemistry.

How does it affect the starter if you feed it milk instead of water? How does the feeding schedule influence the microbes? Do geography and climate matter? Or, whether the baker is a man or woman? Women, Dunn tells me, tend to have more bacteria called lactobacilli on their bodies. 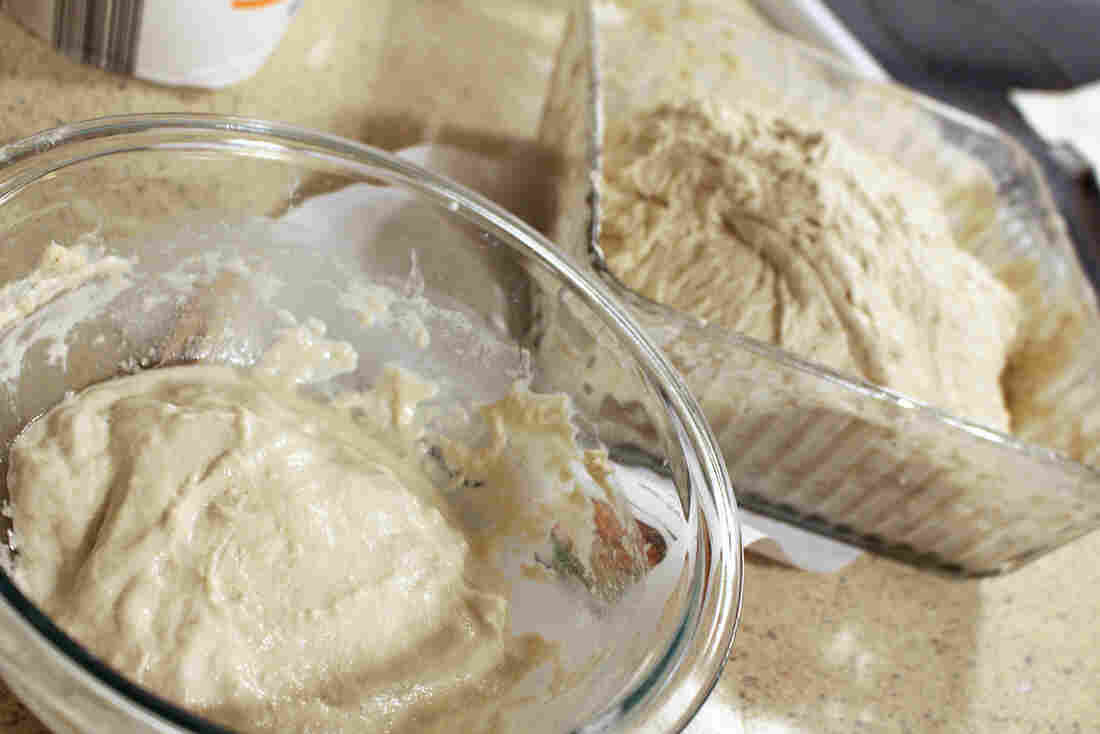 Flour and water on the left; just starter on the right. Courtesy of Lea Shell/Sourdough Project hide caption 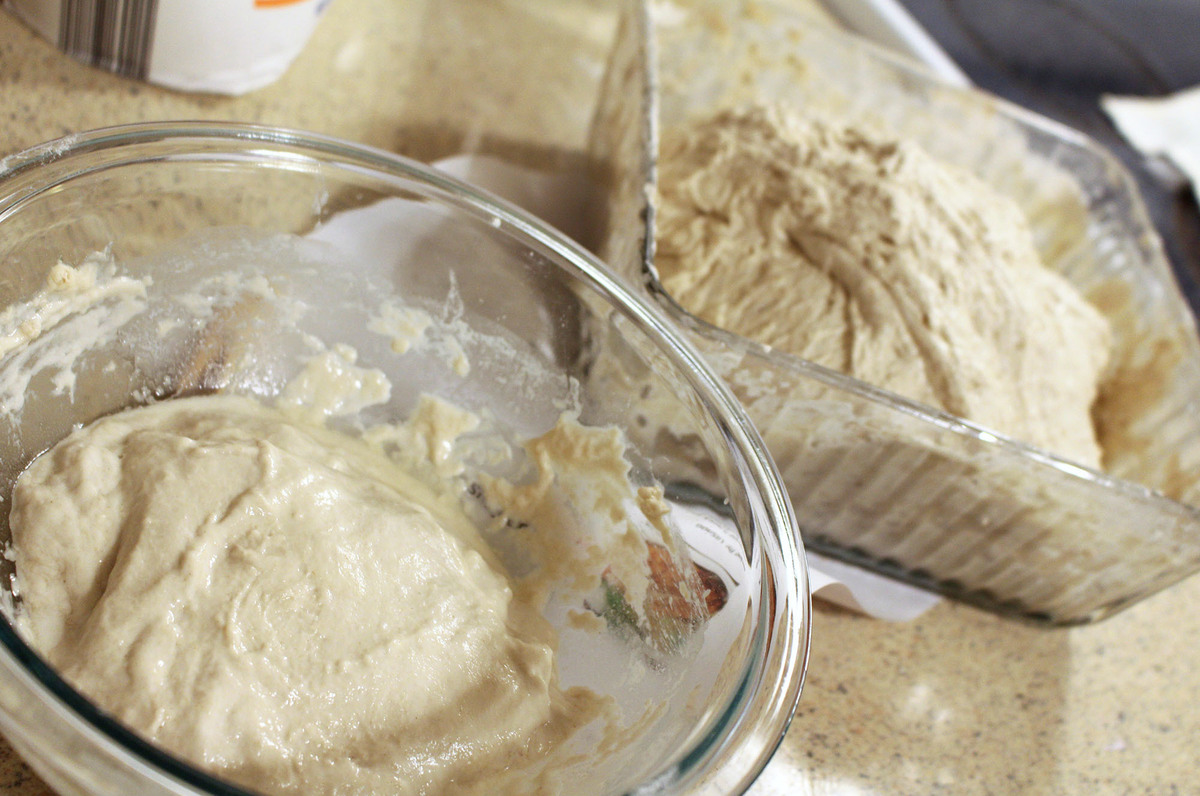 Flour and water on the left; just starter on the right.

To see how individual differences manifest themselves in bread, the researchers plan a big bake-off next summer. They will get 20 bakers together, sequence their DNA (as well as the microbes on their bodies), and have them make starters and bake bread, then compare the results. The goal is to see whether different people with different genetics and different microbes on their bodies have any effect on the starters.

Ultimately, Dunn says, the researchers want to identify which microorganisms make the best-tasting loaf. Ideally, they'll bake thousands of loaves with different starters and enlist chefs and bakers to judge.

"If we know what's in [a starter], we can predict what abilities it might have, what flavors it might have," he says. "For me, that's kind of a fun one, because all that flavor stuff is super magical and not very quantitative, and yet it's measurable."

It will still be months before answers start to trickle in. First, the researchers need samples to study. I'll submit my starter, and if you want to help as well, visit their page.

Meanwhile, I still get a kick out of seeing those bubbles. Replenishing fresh flour and water turns my starter back into a bland mush. But a few hours later, the bubbles return, the mass puffs up in volume, the aromas waft, and the starter springs back to life. It really is like magic, only better. It's biochemistry.

Marcus Woo is a freelance science journalist based in the San Francisco Bay Area who has written for Wired, BBC Earth and Future, Smithsonian, New Scientist, Slate and Discover, among others.

A previous version of this story incorrectly said Liz Terhune got her sourdough starter from her great-grand-aunt. In fact, it came from her great-aunt.