Accessibility links
'Food Truck Voting' Aims To Attract Early Idaho Voters With Convenience : The Salt Idaho's most populous county is adopting the convenience of food trucks to attract more early voters. But a new system doesn't agree with everyone in a campaign cycle filled with election fraud talk. 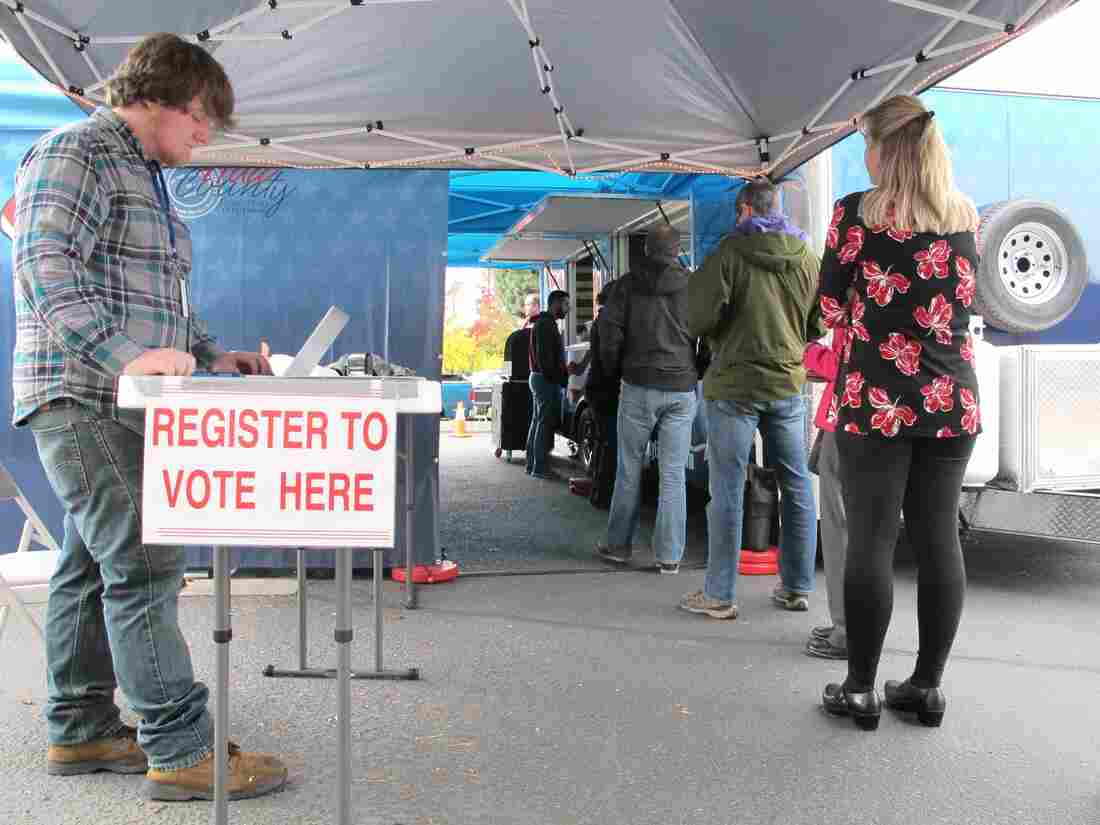 Idaho Power's downtown Boise office is one of the sites that's hosted the Ada County mobile voting trailer. Idaho is one of the states that has same-day voter registration. Frankie Barnhill/Boise State Public Radio hide caption 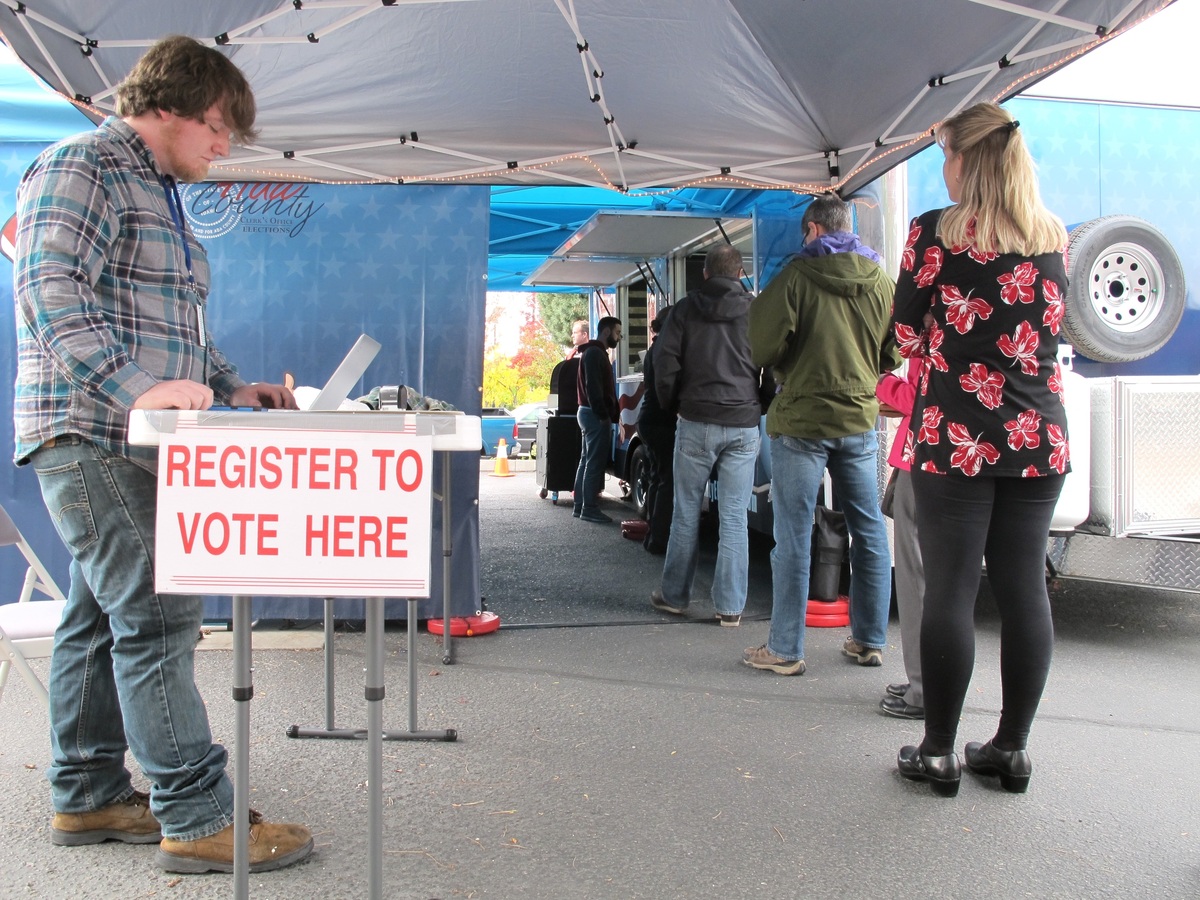 Idaho Power's downtown Boise office is one of the sites that's hosted the Ada County mobile voting trailer. Idaho is one of the states that has same-day voter registration.

Elections officials in one Idaho county have found a delicious new way to get out the vote: by bringing "food truck voting" straight to the people.

OK, so it's not a real food truck. You can't get a meal there.

The Ada County mobile voting booth is actually a converted cargo trailer, complete with walk-up windows and a giant "I voted" sticker painted on the side. As the most populous county in Idaho (the capital of Boise is the county seat and most urban city in the mostly rural state), Chief Deputy Clerk Phil McGrane says the mobile trailer adds a fifth option to early voting locations in Ada County. 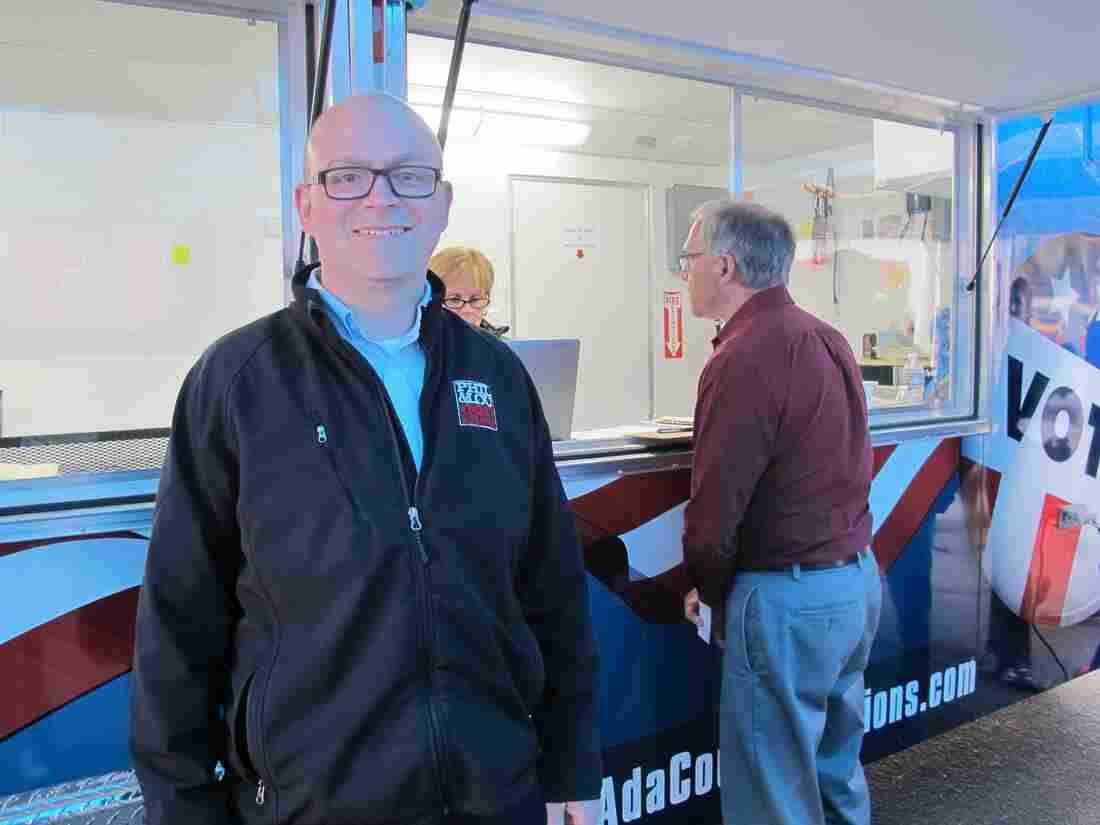 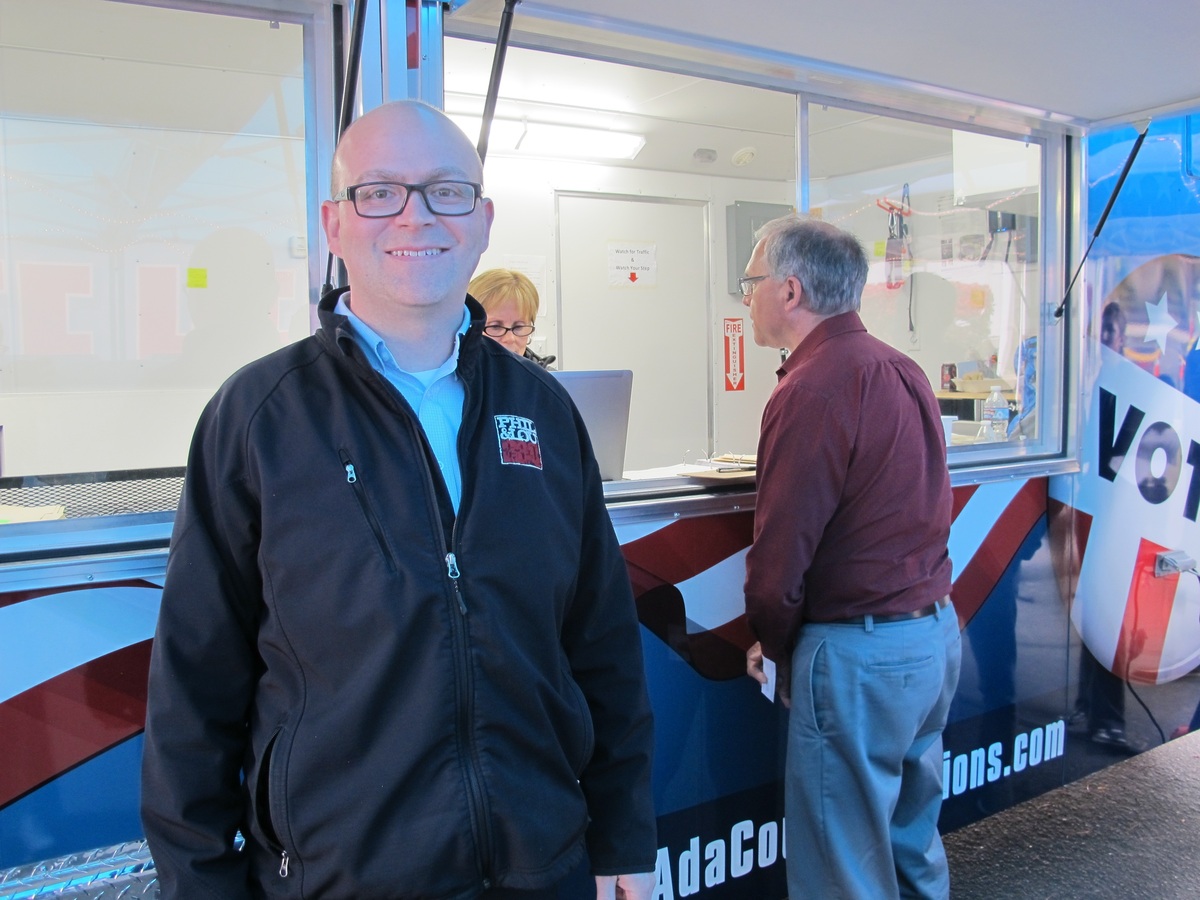 The county expects 200,000 people will vote this election, and McGrane hopes to get 60,000 of those votes early.

"So far we've been able to vote almost 2,000 people for this election by moving the trailer around to some of our biggest employers and some of our really highly populated areas," says McGrane.

So, where did food truck design come from? Believe it or not, McGrane says he was inspired by his love of Kansas City barbecue.

"One of my hobbies on the side is competitive barbecue," says the elections official. "And if you were to go see me set up, you'd see pop-up tents and a trailer, and so it's taking some of those ideas and just flipping it for voting."

Earlier this week, the voting booth was parked outside Idaho Power's Boise headquarters. Employees came down during their lunch break to cast their ballots early. Brooks Reynolds walked a few blocks from his job in downtown, and says it was a convenient way to make his voice heard.

"I actually heard from a friend of mine, and then I was like, 'Oh yeah — I want to go do that now,' " Reynolds says. "And I actually shared it with my siblings and friends and they're all doing it as well."

As the 29-year-old leaves the trailer he puts his "I voted" sticker on his jacket.

To Phil McGrane, making voting convenient makes all the difference between a low turnout year and high turnout year. The county's goal this year is 75 percent turnout, and so far — they're on track to meet that goal, while tripling the record of early votes cast.

"People often associate elections with long lines — the reason being everyone gets off work and goes to the polls at the same time," says McGrane. "Voting on a Tuesday doesn't make sense for a lot of people; this provides an opportunity where they can plan it out, fit it into their schedule, get their vote cast."

The food truck voting system works because of a computerized voter roll, which makes it easy to print off ballots, no matter what precinct a voter lives in. McGrane says the county hired a cybersecurity company to ensure the integrity of the process.

But in an election year marred by allegations of voter suppression and fraud, Ada County is not without its critics.

"We are acutely aware of what's going on nationally and we see it here locally as well. Interestingly enough, some guy drove by earlier and yelled that the election is rigged. And so we see it in full force."

Ada County spent about $50,000 on the trailer and all the equipment that goes with it, which is a fraction of their 2016 election budget (they plan to spend between $800,000-900,000). McGrane says the design could easily be replicated in other parts of the state for counties that want to make the investment.

He sees the booth as the wave of the future in elections, relieving the pressure put on polling places on election night.