Accessibility links
Hey, Looks Like Americans Are Finally Eating More Fish : The Salt Americans are often chastised for what we eat. Now we're getting a pat on the back. A new report finds seafood consumption is up by nearly a pound from the previous year, the biggest leap in 20 years. 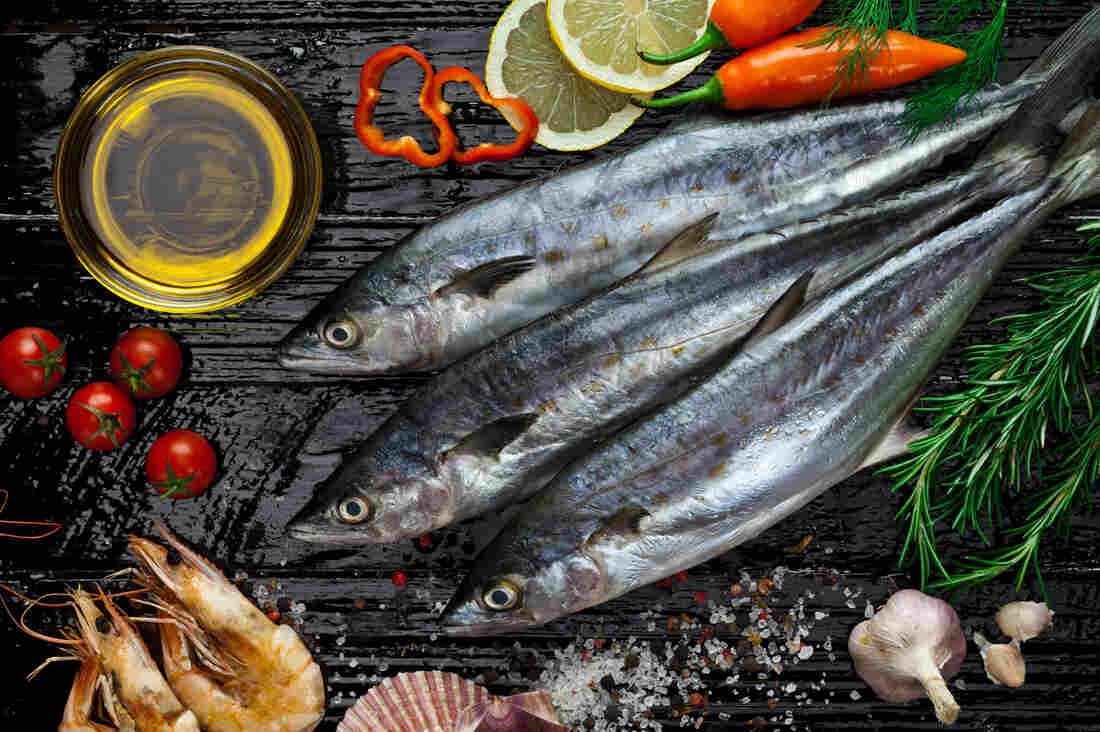 Americans are often chastised for what we eat. Now we're getting a pat on the back. A new report finds seafood consumption is up by nearly a pound from the previous year, the biggest leap in 20 years. fcafotodigital/Getty Images hide caption 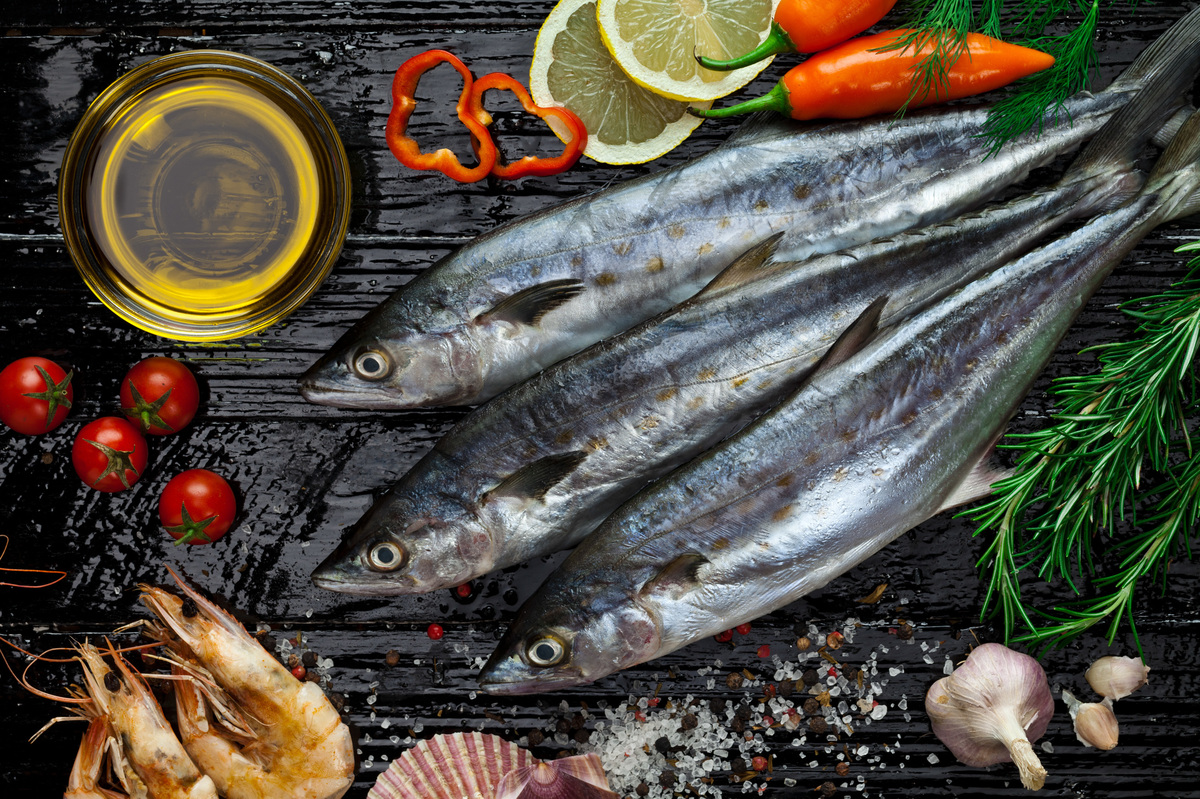 Americans are often chastised for what we eat. Now we're getting a pat on the back. A new report finds seafood consumption is up by nearly a pound from the previous year, the biggest leap in 20 years.

San Diego native Megan Olbur didn't grow up eating much seafood beyond tuna sandwiches, fish sticks or the occasional salmon dinners her parents made. But in 2015, when Olbur became pregnant with a daughter of her own, she heeded the advice of her physician and deliberately began adding more seafood to her diet as a way to boost brain development and to ensure the health of her growing baby.

It turns out, she wasn't alone in upping her fish fare.

According to the annual Fisheries of the United States Report released by NOAA last week, Americans increased their seafood consumption to 15.5 pounds of fish and shellfish per person in 2015, up nearly a pound from the previous year, making it the biggest leap in seafood consumption in 20 years.

"It's terrific news," says Tom Brenna, professor of human nutrition at Cornell University and a member of the 2015 Dietary Guideline Committee. "We're moving in the right direction."

It's a rare nutritional pat-on-the-back for Americans, who routinely get chastised over their diets, but the good news comes with some caveats.

The bump in seafood consumption may mean that we're enjoying four additional seafood meals a year, but we're still only eating about 4.77 ounces of seafood a week. That's better than where we were just a few years ago, but nowhere close to the 8 ounces of seafood per week most of us should be eating according to the most current Dietary Guidelines. (For women who are pregnant, may become pregnant or are breastfeeding, the recommendation is to consume at least 8 ounces and up to 12 ounces of a variety of seafood per week, from choices lower in methylmercury.)

And we're still not doing a very good job of getting a variety of seafood into our diets. According to the National Fisheries Institute, shrimp, salmon and tuna continue to dominate the top of their most-consumed seafood list, just as those tasty species have for the past decade. But even a small uptick in seafood consumption is seen as a boon to public health and is a step in the right direction toward reduced risks of cardiovascular disease and improving the neurodevelopment of children.

"Any fish is better than none, and any fish is better than fried, empty-calorie junk food," says Joe Hibbeln, a researcher with the National Institutes of Health who has studied the effects of fish and omega-3 fatty acids in reducing depression, suicide and violence. Hibbeln says the nutritional value of seafood is so important to health, he'd like to see it served more frequently in the school lunch program.

NOAA doesn't break out individual species or products in its latest report, but Michael Liddel, a statistician with the agency, notes that one-third of the increase in consumption came from canned seafood products, particularly canned salmon. That increase may stem from The Emergency Food Assistance Program at the USDA, which purchased more than $40 million in surplus canned Alaskan salmon in 2014 and 2015 and distributed it to food banks across the country.

While the 15.5 pounds of seafood is worth noting, and makes the U.S. the second-largest consumer of seafood after China (and ahead of Japan), it's still an amount that's dwarfed by our national appetite for chicken and beef. Janet M. Riley, senior vice president at the North American Meat Institute, says Americans ate approximately 59.2 pounds of chicken and 51.7 pounds of beef in 2014 — each more than double our seafood intake.

It's worth noting that, while NOAA's consumption figures are considered reliable, they're calculated using what's called a "disappearance" model. Broadly, that means they add domestic landings and seafood imports together, while subtracting out exports to determine domestic consumption. That's very different than the way the Centers for Disease Control and Prevention looks at consumption through its National Health and Nutrition Examination Survey (NHANES). There, interviews are used to determine what Americans are actually eating, and differences in data may appear. (NHANES data is what the Dietary Guidelines Committee relies on.) But according to CDC officials, analyzed NHANES data from 2015 is not yet available, so we can't compare the numbers with the NOAA finding. Still, Brenna thinks the NOAA figures are a strong sign that consumption is up.

So what's holding Americans back from reaching the magic number of 8 to 12 ounces of seafood a week?

Gavin Gibbons, spokesperson for the National Fisheries Institute, cites "years of confusing messages over what's sustainable and healthy." He has a point. As recently as 2014, the EPA and FDA were tweaking warnings on mercury and seafood consumption for pregnant and nursing women issued a decade earlier — advice that many Americans outside that demographic had taken to heart, limiting their own seafood consumption.

Industry and government advice over seafood consumption, mercury warnings and health benefits may have improved in recent years, but for new moms like Olbur, the message of what's both safe and healthy for her family is still fairly muddled.

"It's so confusing. When we're pregnant, we're told to eat more fish, but to avoid having too much mercury, and don't eat raw fish like sushi. At some point, you stick your fingers in your ears and just do what you already know," she says. "Nutrition is a confusing topic for everyone."