Accessibility links
Bread Babies And Purple Drink: Ecuador's Spin On Day Of The Dead : The Salt While Mexico's Día de los Muertos is better known in the U.S., the day is observed widely through Latin America, with customs as diverse as the people. In Ecuador, it's Dia de los Difuntos. 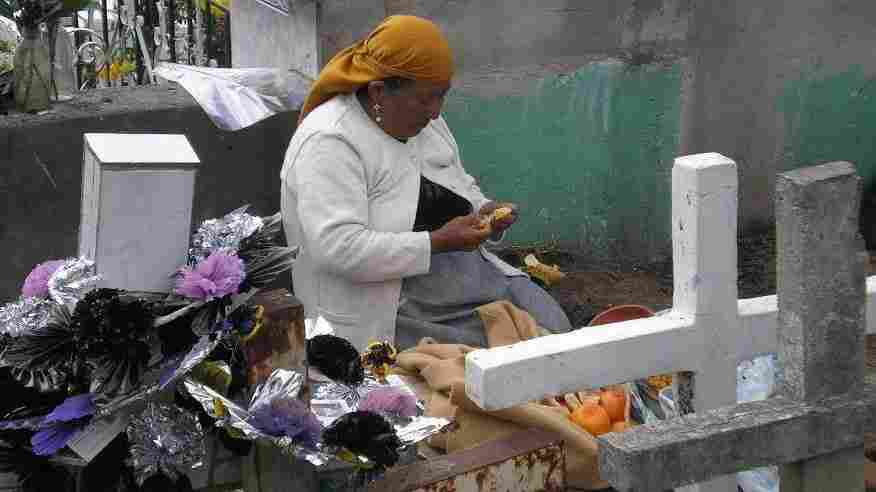 At Calderón cemetery near Quito, Ecuador, a woman shares a meal as a way to remember her loved ones. Amy E. Robertson/NPR hide caption 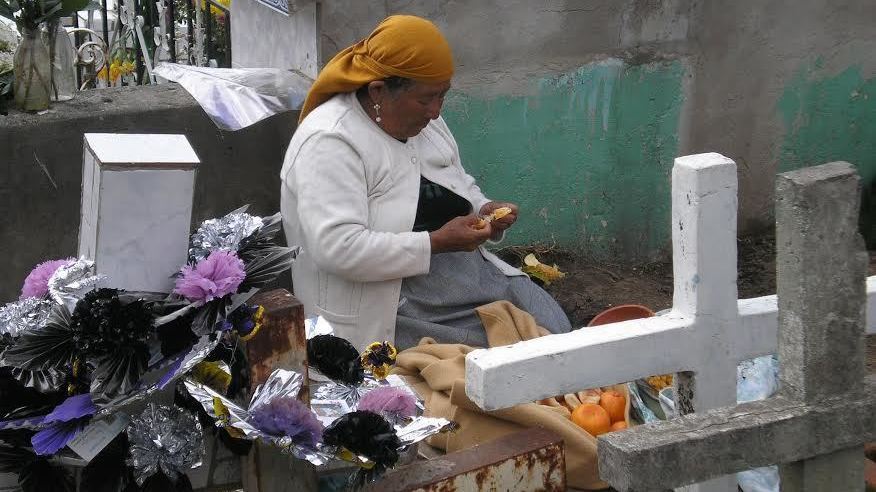 At Calderón cemetery near Quito, Ecuador, a woman shares a meal as a way to remember her loved ones.

Hundreds of white crosses crowd together at Calderón cemetery, just outside of Quito, Ecuador. Some are garlanded with rings of purple paper flowers and shiny aluminum leaves. Graves are adorned with elegant bouquets of roses and alstroemeria – known as lily of the Incas.

On November 2nd, known in Ecuador as Día de los Difuntos (Day of the Deceased), friends and family come to remember their loved ones, bringing meals to share with those on their journey to the next life.

While the traditions of Mexico - where the holiday is referred to as Día de los Muertos (Day of the Dead) – tend to be better known in the U.S., the day is observed widely through Latin America, with customs as diverse as the people.

Anthropologists say that the ritual of communing with the dead dates back thousands of years.

When Spanish colonialists arrived in Latin America in the 16th century, the native death rituals were incorporated into observations of All Hallows' Eve, All Saints' Day and All Souls' Day, which occur back to back on the Roman Catholic calendar. 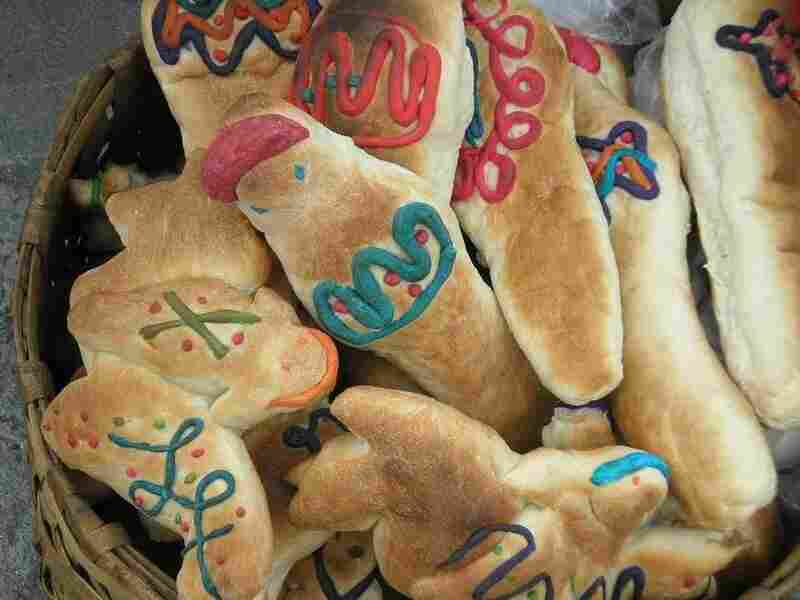 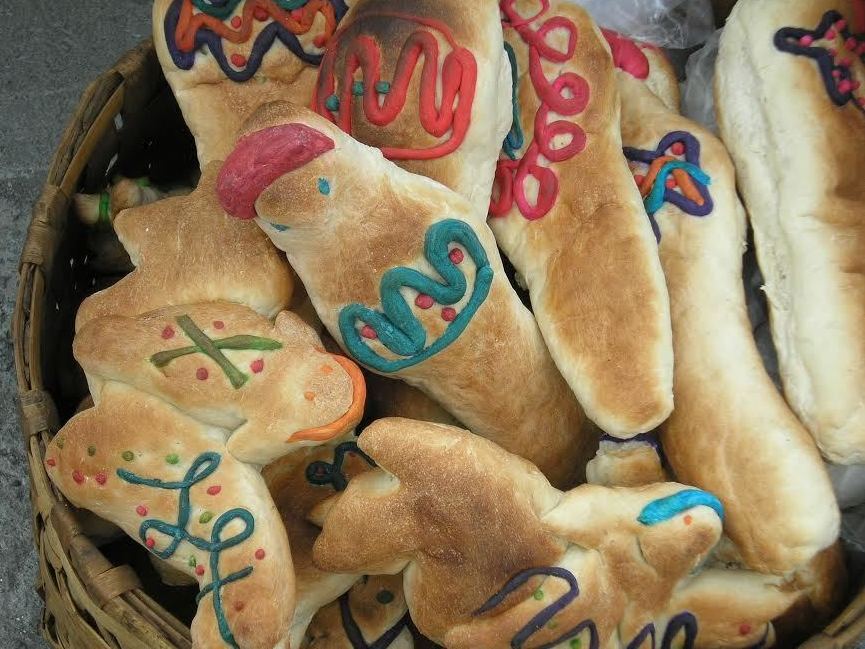 "Guaguas de Pan," or "bread babies," are a traditional treat during the celebration of Día de los Difuntos.

In Ecuador today, All Saints Day (Día de Todos los Santos) is celebrated on Nov. 1, and is a smaller holiday focusing on children who have passed away. All Hallows Eve, on Oct. 31, is not observed religiously, although American-style Halloween celebrations have started to gain in popularity in recent years. Día de los Difuntos is the most celebrated, as it honors all who have died.

Seven percent of Ecuador's 14 million inhabitants identify as indigenous, the vast majority of whom are Kichwa (Quechua). For them, death does not mark an end, but a transition to another life in which the dead and the living share in eating, drinking, talking and praying on this day.

Part of Ecuador's tradition includes guaguas de pan (bread babies), in which sweet bread dough is shaped into plump babies dressed with piped icing or bits of colored dough. Baskets of guaguas are for sale at the entrance to the cemetery, but many visitors bring their own, with extras to leave on tombstones.

Some say guaguas represent the deceased, and eating them is a way of remembering. Some believe they were created to replace the Indian tradition of mummification. Others think that the form of the baby is based on the indigenous belief that when a person dies, he or she regains the innocence of an infant.

Sugar Skulls, Tamales And More: Why Is That Food On The Day Of The Dead Altar?

Colada morada, a thick dark purple beverage served piping hot, is the traditional accompaniment to guaguas de pan. Colada means strained, referring to the fruit that has been strained out, and morada means purple, the color the drink has taken from the fruit. It is made with blue or black corn flour, Andean blackberries, pineapple rinds, and exotic fruits: tiny sour blueberries called mortiños, a citrusy native fruit called naranjilla, and babaco, a cousin of the papaya. The fruits are brewed in a pot with herbs and spices.

Guaguas de pan and colada morada are as much a part of this holiday for Ecuadorians as turkey at Thanksgiving is for Americans.

Every bakery in Quito seems to have its own version of guaguas and colada in the weeks leading up to Día de los Difuntos, and I made it my mission to taste as many as possible. Sweet, dry, fruity, pungent – the subtle variations are endless. It's impossible to pick a favorite.

On the Day of the Deceased, I head to the cemetery in the early morning, where vendors already line the streets selling ice cream, candy apples and tostados (homemade corn nuts). They also peddle sunhats, flowers and grave decorations. There's even a makeshift amusement park with a rickety Ferris wheel set up for children.

As the first visitors arrive, bearing food and flowers, I thread my way between tightly packed graves and stone crosses, trying to be unobtrusive as I watch the day-long vigil begin to unfold. The first of three Masses is conducted for an attentive audience. Matriarchs, joined by children and grandchildren, seem to be in charge of the celebration. By the time I leave an hour later, there are a few hundred visitors, with many more on the way. 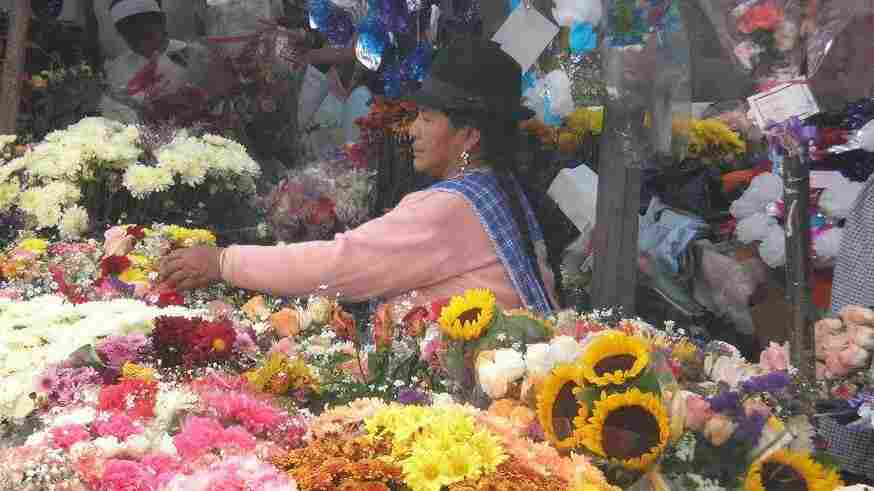 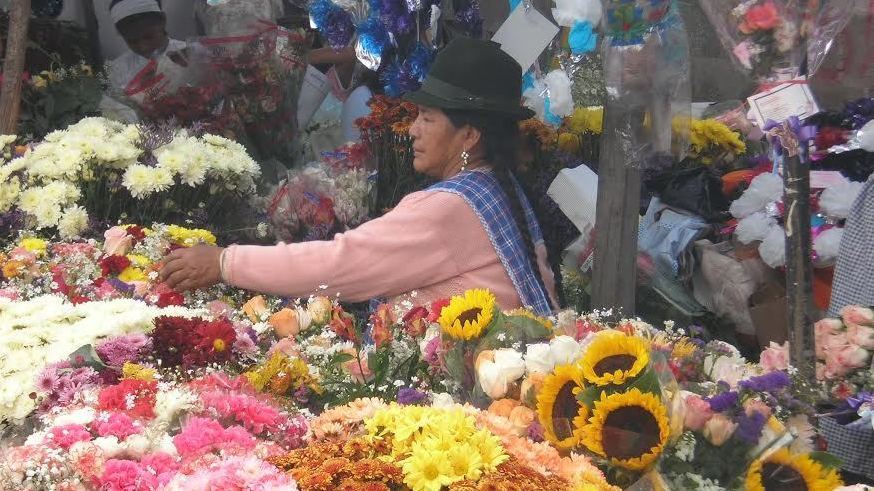 Vendors selling food and flowers line the streets outside Calderón cemetery during this holiday.

I stop by another of Quito's cemeteries on my way home. Modern and orderly, thousands of small white headstones lay in neat rows, encircled by abundant green grass and an expansive view of the city and the Pichincha volcano. Well-heeled Quiteños bring flowers, and entrepreneurs wield small brushes offer to dust off headstones in exchange for a small tip.

Memories of Ecuador are now a part of my own family's past. We lived there for three years, and my daughter was born there.

One November, while living in Honduras, I gather with two Ecuadorian friends to make our own guaguas de pan and colada morada. While many modern Ecuadorians purchase these foods, families still gather together to make the traditional fare at home. One friend offers her family recipe for the bread, and together with our children we form babies and animals, with bits of colorfully dyed bread stuck on for eyes and mouths. We add water and fresh fruit to a pot with a colada morada mix that my friend brought from Ecuador.

My friends instruct me to dip the guagua headfirst into the colada morada and bite off the head, symbolically getting rid of bad thoughts.

Even with lumpy babies and instant beverage, we love our guaguas and colada just the same. In preparing them, we brush the dust off the gravestones of our memories, while at the same time creating new ones.