Accessibility links
This Food Truck Serves Up Gourmet Fare And Drinks — And Jobs For Refugees : The Salt Half of the 13,000 residents of Clarkston, Ga., are foreign born — many of them resettled refugees. A nonprofit food truck helps them get job training and work experience, and network with neighbors. 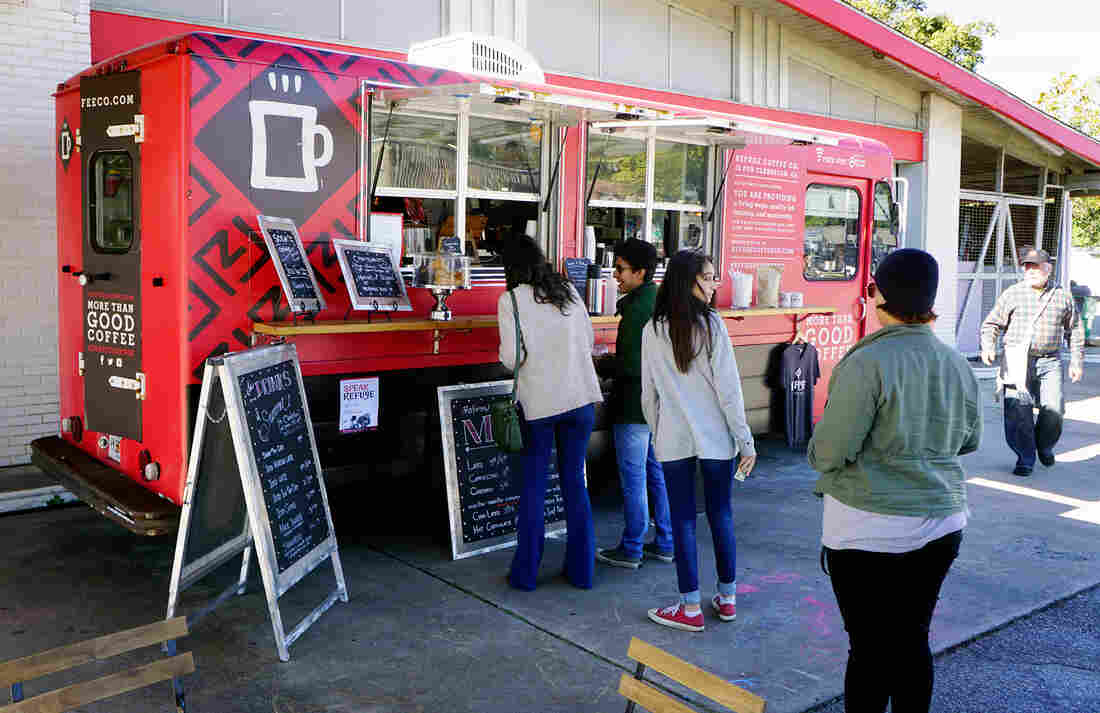 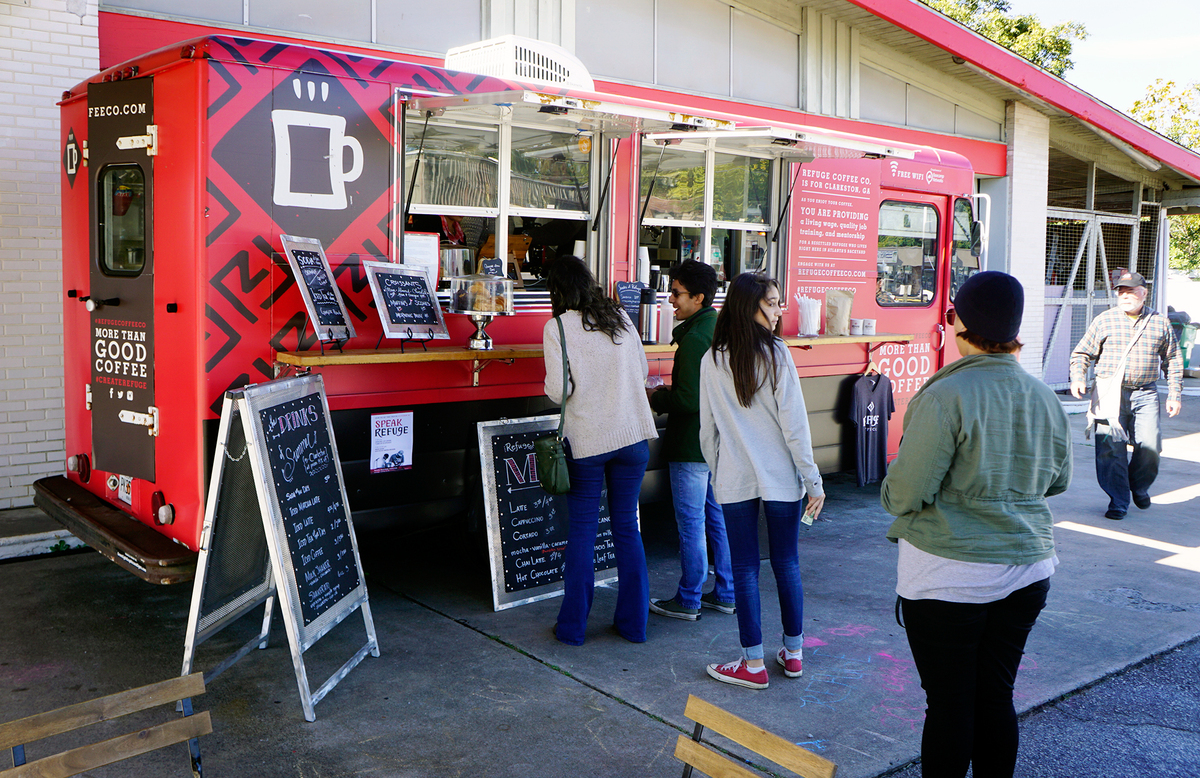 Refuge Coffee is a nonprofit gourmet food truck that employees refugees resettled in Clarkston, Ga., and provides job training and networking opportunities within the community.

On a bright, blustery October morning in Clarkston, Ga., the sweet aroma of baked treats and brewing coffee flows out the windows of the fire engine-red food truck known as Refuge Coffee Co. parked at a street corner. A dozen or so eager customers mill about, converse and gradually fall into line.

Three refugee-baristas are buzzing about inside the truck. Amina Ahyaoui, 32, arrived from Casablanca, Morocco, in 2014. Tha Hlei Iang, 31, is from the Chin state in Myanmar. She spent four years in Malaysia with her husband and daughter before they made their way to Clarkston in 2011. Ahmad Alzoukani, 31, is a pharmacist from Damascus, Syria. He came to Clarkston in September of last year. 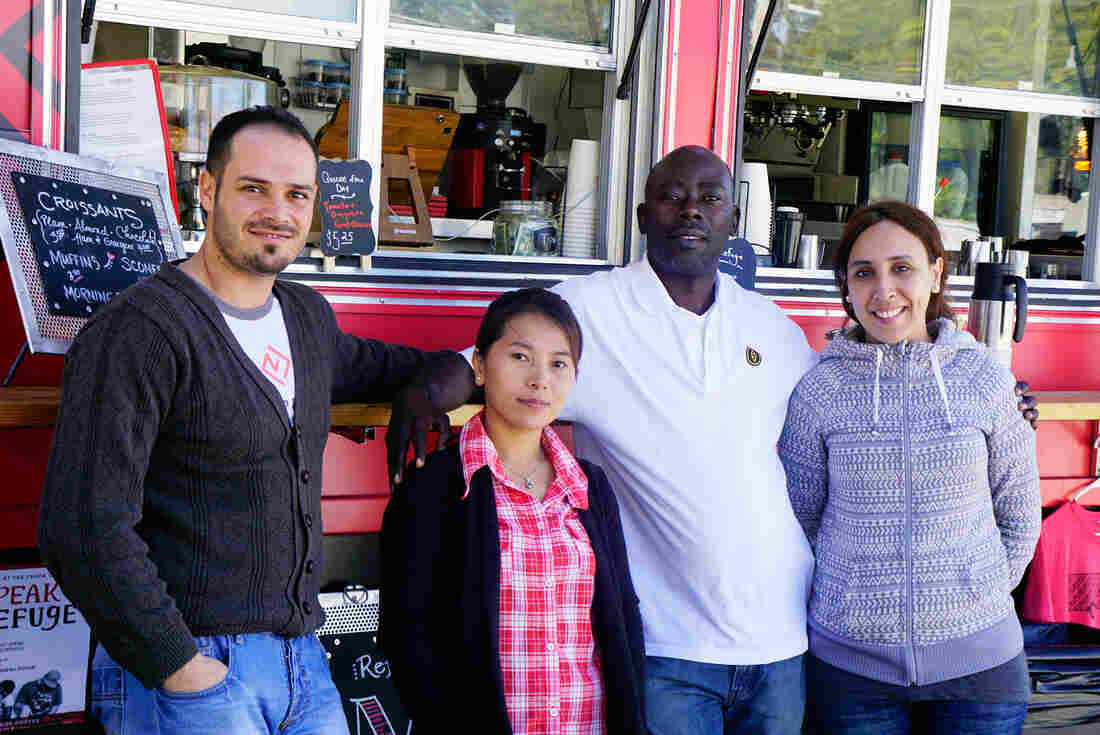 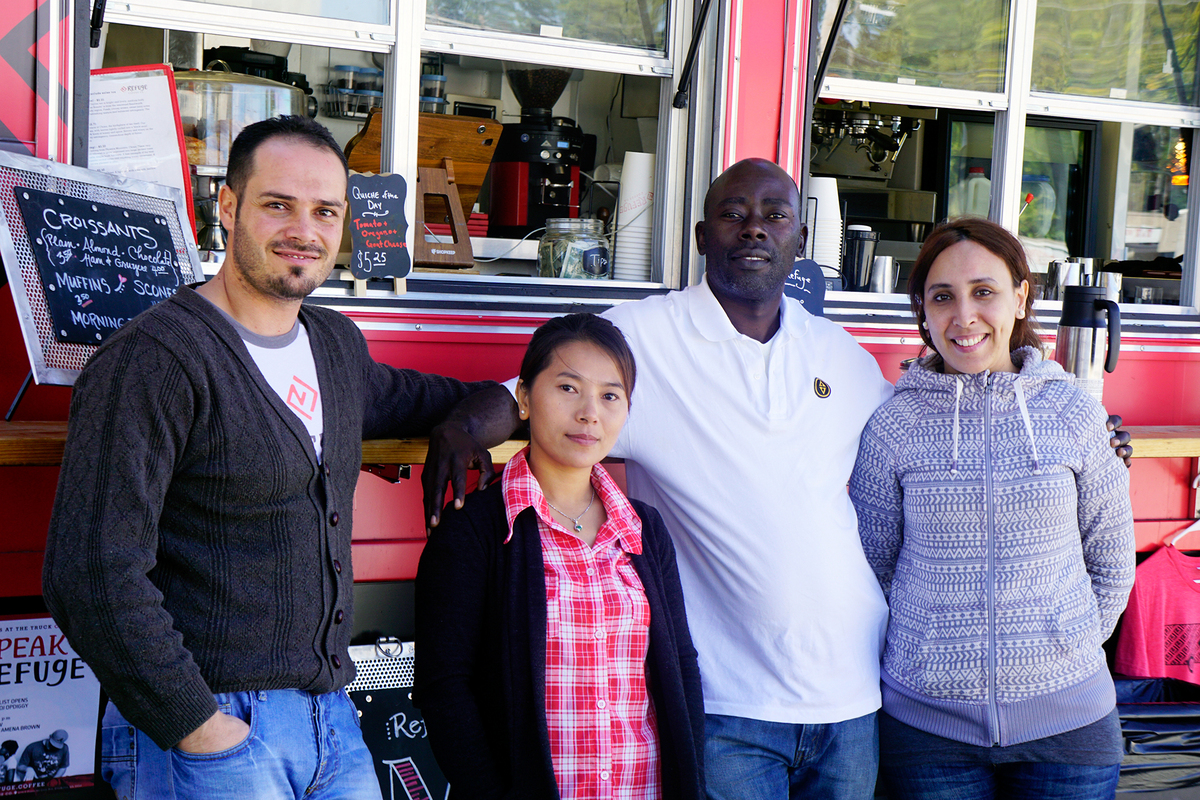 Though Iang and Ahyaoui are trainees who only began working at Refuge Coffee a few weeks ago, they pour and stir and make change like seasoned professionals. Iang laughs when she says she doesn't even drink coffee or tea, just juice and water. Ahyaoui loves coffee, but enjoys socializing with the customers more. Alzoukani, who has been with Refuge Coffee for a little over a year, is quick to point out his specialty. "I make the best cappuccinos," he says.

The truck sits in a parking lot in front of a garage that once belonged to a used car dealership. Some customers take their orders to go or sit outside at tables. Others meander to the cozy cafe space inside the garage. Red and turquoise tables and plush sofas offer customers plenty of space for dining, communing or taking advantage of the free Wi-Fi.

Shortly after noon, 43-year-old Ndahimwa Leon Shombana, Refuge Coffee's manager since May, makes his way to the garage with the purposeful gait of the high school teacher he once was. He checks in with other staff and will soon begin his shift on the truck. Shombana, who arrived in Clarkston in November 2012, hails from the eastern part of the Democratic Republic of Congo.

Ahyaoui, Iang, Alzoukani,and Shombana embody Clarkston's international vibe. In the 1990s, the U.S. State Department deemed this northeast suburb 11 miles from downtown Atlanta, with its low cost of living and easy access to public transportation, an ideal location for refugee resettlement. Some 13,000 residents call Clarkston's 1.4 square miles home. Half are foreign-born — most of them, like the employees at Refuge Coffee, are refugees. They come from everywhere from Afghanistan, Bhutan and Burma, to Ethiopia, Somalia, Sudan, and, more recently, Syria.

None of the baristas spoke English when they arrived in the U.S. They take tuition-free, English-as-a-second-language classes at Georgia Piedmont Technical College. Learning the language has become their highest priority. "Imagine people who come to this country without a word of English," says Shombana. "That person cannot express himself. That person is not free." 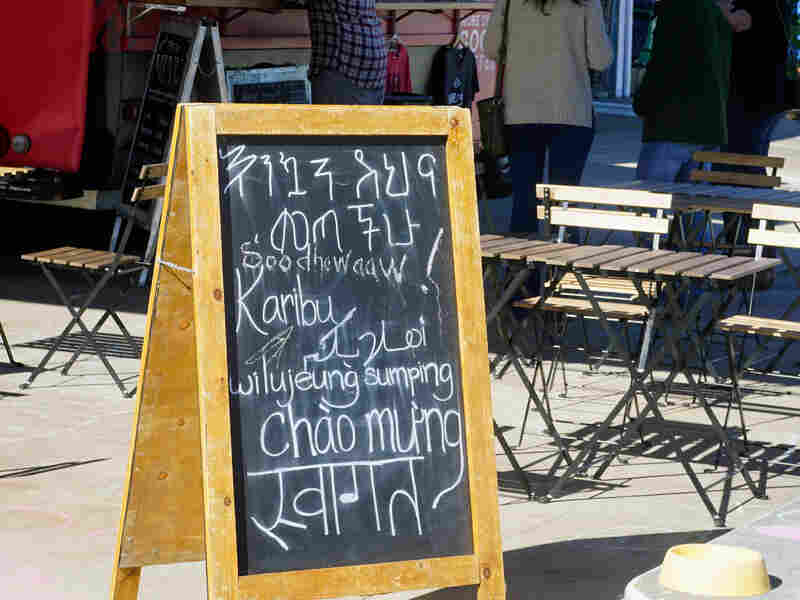 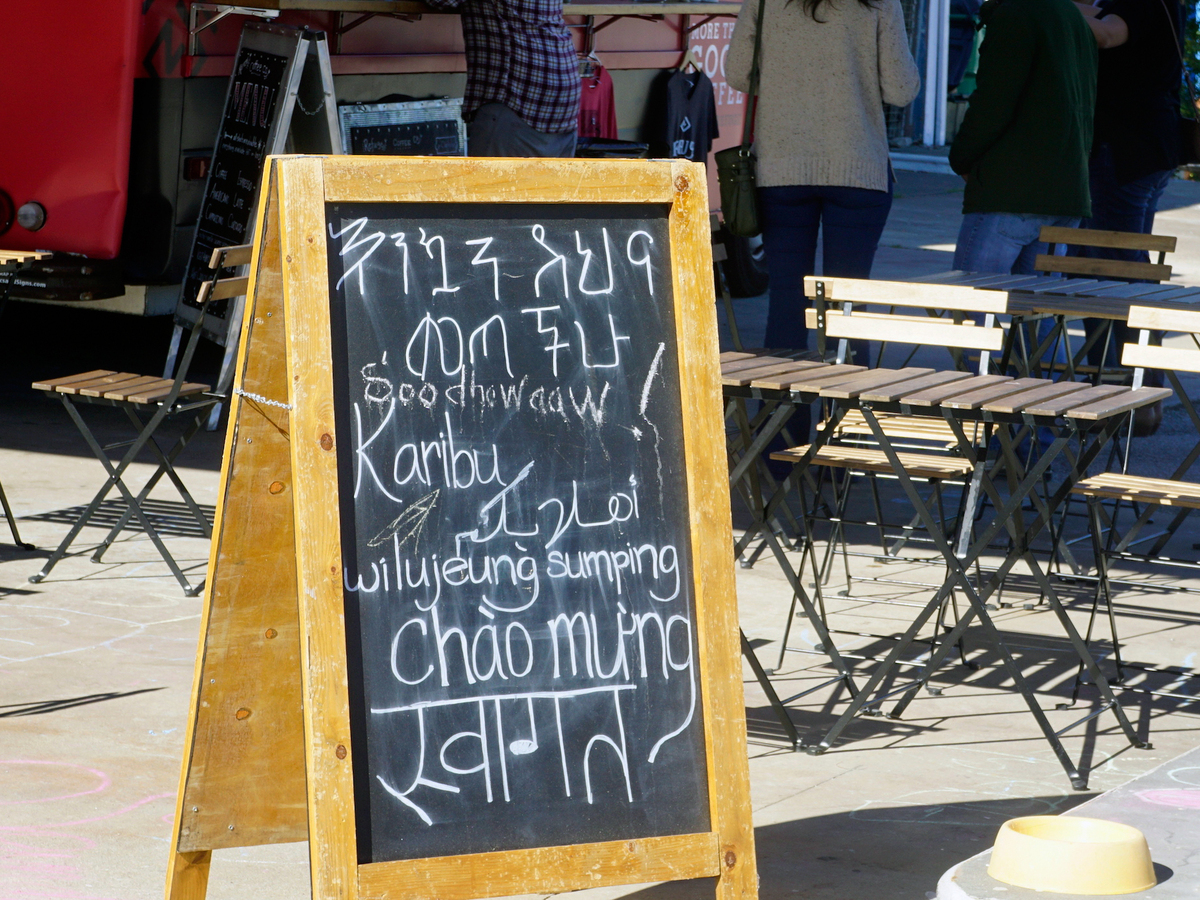 Today, Refuge Coffee employs two full-time and three part-time staffers, as well as four full-time barista trainees. The red truck is permanently stationed in front of the garage — it's open six days a week, from 7 a.m. to 6 p.m. Alzoukani, who insists Atlanta traffic is much milder than traffic in the Middle East, drives the second truck — used for catering — to weddings, corporate events and even movie sets in the greater Atlanta area. On the set of the HBO movie Confirmation in July 2015, actress Kerry Washington, who starred as Anita Hill, thanked Refuge Coffee on Instagram for serving the cast and crew.

Income from sales covers only half of Refuge Coffee's current operating costs, with private donations and grants making up the rest. Though the Refuge Coffee team hopes to generate more sales in the future, it is currently facing a more dire issue — location.

When the used car lot went out of business, the property on which Refugee Coffee is located went into foreclosure. Refuge Coffee must vacate the premises by Dec. 1 or purchase the property with funds it hopes to raise in a crowd-sourcing campaign.

Shombana remains optimistic, though. With the support of the community of Clarkston, "the future of Refuge Coffee," he says, "is bright."

Anjali Enjeti is an award-winning essayist, journalist and literary critic based in Atlanta.