Accessibility links
Deforestation Opponents Enlist Powerful Ally: Big Food. But There's A Catch : The Salt Hundreds of food companies have promised to keep their suppliers from cutting down forests. A global coalition of environmental groups is watching to see if the companies are keeping their promises. 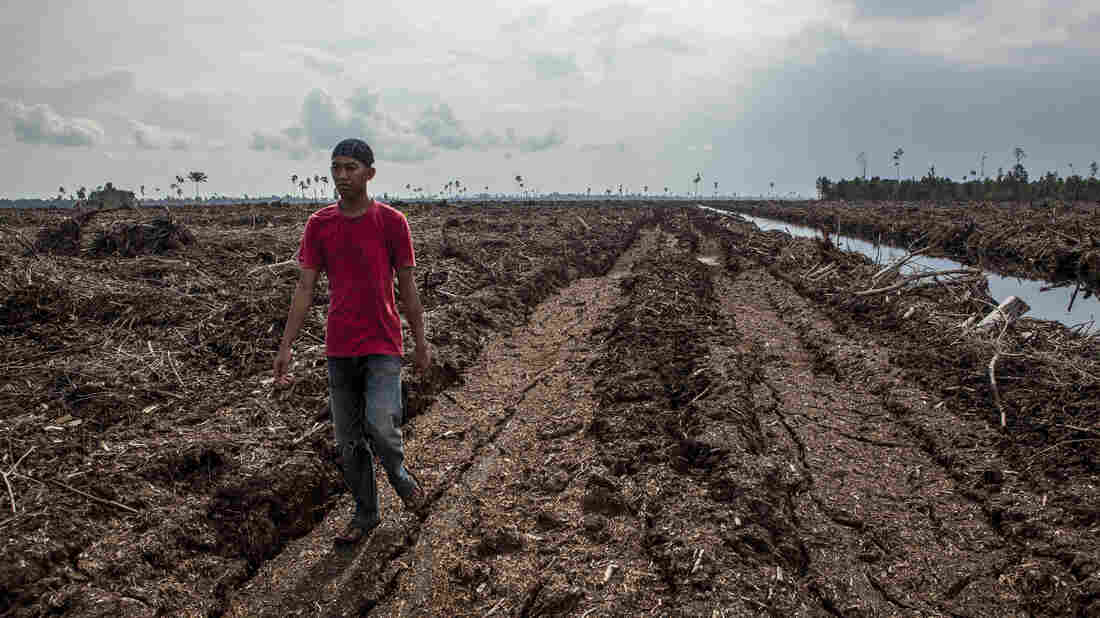 There's a seductive idea, currently being road-tested, for how to stop the world's forests from disappearing. It relies on big food companies.

That's because most forests are being cleared in order to grow crops or graze cattle. And the resulting palm oil, soybeans or beef find their way into foods being sold by a relatively small number of global companies.

So here's the strategy: Get those companies to boycott products from deforested land, and much of the economic incentive to clear more forests will disappear. This should slow down or even stop the loss of forests.

At first glance, the strategy looks like it's working marvelously. According to a new report from some leading environmental groups, 400 of the biggest global food companies have taken steps to make sure that at least some of their suppliers aren't responsible for deforestation. About 90 percent of those companies do buy raw materials from deforestation "hot spots" like Indonesia and Brazil.

But there's a catch. In fact, there is a whole series of catches, according to the report.

"We have this big problem," says Charlotte Streck, director of a group called Climate Focus and co-author of the new report. "We look at what the companies are doing, but we do not know how effective it is."

For one thing, some companies are making promises that aren't firm commitments. "If a company only says, for example, 'We procure certified palm oil if it is available,' but doesn't help the producers make that supply available, then it is a relatively easy way out," says Streck. According to the report, companies should instead provide farmers with financial and technical support to help them transition into growing those crops in a more sustainable way.

A bigger problem, though, is that the companies making these pledges are mostly retailers and food manufacturers, and those companies don't know what's happening at the other end of the supply chain, on the farm. Very few big food companies can trace their palm oil back to particular plots of land. They just know which mill processed the palm fruit into oil.

So they have to rely on others, such as organizations that put their stamp of approval on particular suppliers, to verify that a particular shipment of palm oil came from land that hadn't been cleared of trees recently.

What's more, they know even less about the origin of their soybeans or beef. "In the lifetime of [a] Brazilian cow, it goes through many owners and many farms, and it is almost impossible to check on all the farms, that they are not associated with deforestation," Streck says.

Finally, it's hard to know whether the companies that have pledged to shun deforestation actually control a big enough share of the market to make a difference.

Companies with headquarters in Europe or North America account for about 90 percent of the corporate anti-deforestation commitments. Those companies are major players in the palm oil trade, but not in beef production in the deforestation hot spots of Brazil.

"Most of the beef in Latin America — about 80 percent — is eaten in Latin America," Streck says. "So that means that the consumer pressure in Europe and North America has limited effect."

That's a particular problem because beef is "by far the largest driver of deforestation,' she says. "The carbon footprint of beef related to deforestation is about nine times bigger than palm oil."

In all, scientists estimate that deforestation is responsible for about 15 percent of all greenhouse gas emissions. According to Streck, that's more than all the cars, ships, and airplanes on Earth.

Instead of tracing commodities from consumer back to supplier, some environmental watchdogs are starting at the other end of the supply chain, in the deforestation hot spots themselves.

The World Resources Institute has set up a project called Global Forest Watch. It has created a database of palm oil mills around the world, and it's analyzing satellite images to measure deforestation within 50 km (about 31 miles) of each mill. The group can flag any mills located amid disappearing forests, and companies can check whether they are buying oil from that location.

Despite all these shortcomings, though, Streck thinks that food companies will make a difference. "I do not think that an individual company, even a big one, has the power to reduce deforestation," she says, "but i do think that there is a critical mass [of companies making deforestation pledges], and that matters."