Accessibility links
A Navajo Chef Gives A Glimpse Inside The Makeshift Kitchens At Standing Rock : The Salt Protesters in the months-long standoff at the Indian reservation live in camps with makeshift kitchens. Chef Brian Yazzie was just there, feeding activists in a way that honors indigenous traditions. 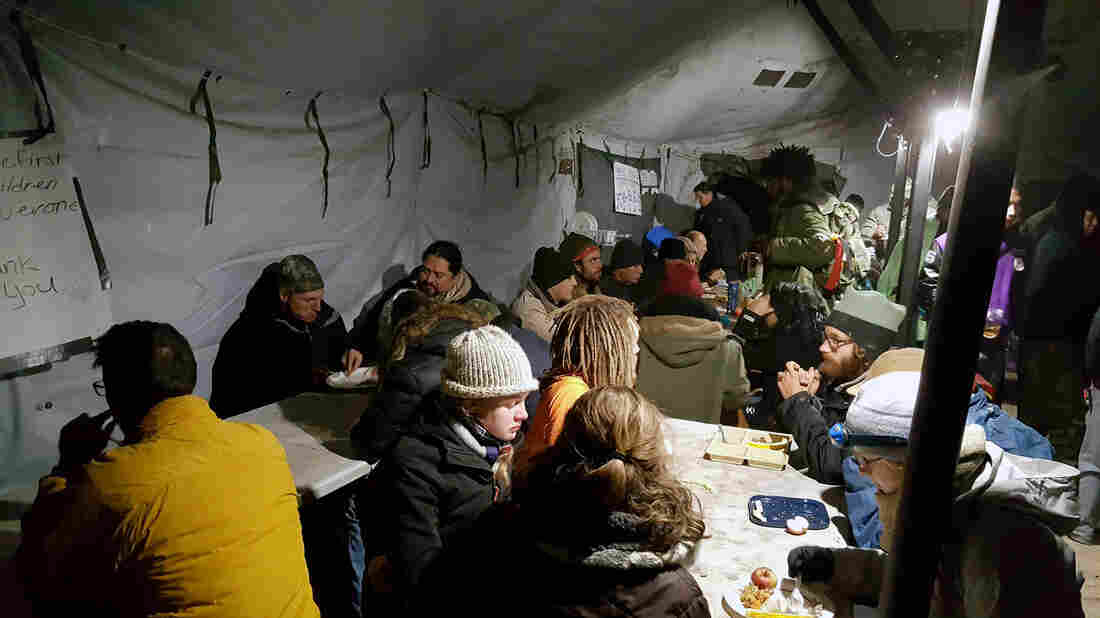 People at the Oceti Sakowin Camp enjoy a meal inside a tent that serves as a dining hall. Oceti Sakowin is the largest of several camps housing demonstrators against the Dakota Access Pipeline. Courtesy of Brian Yazzie hide caption 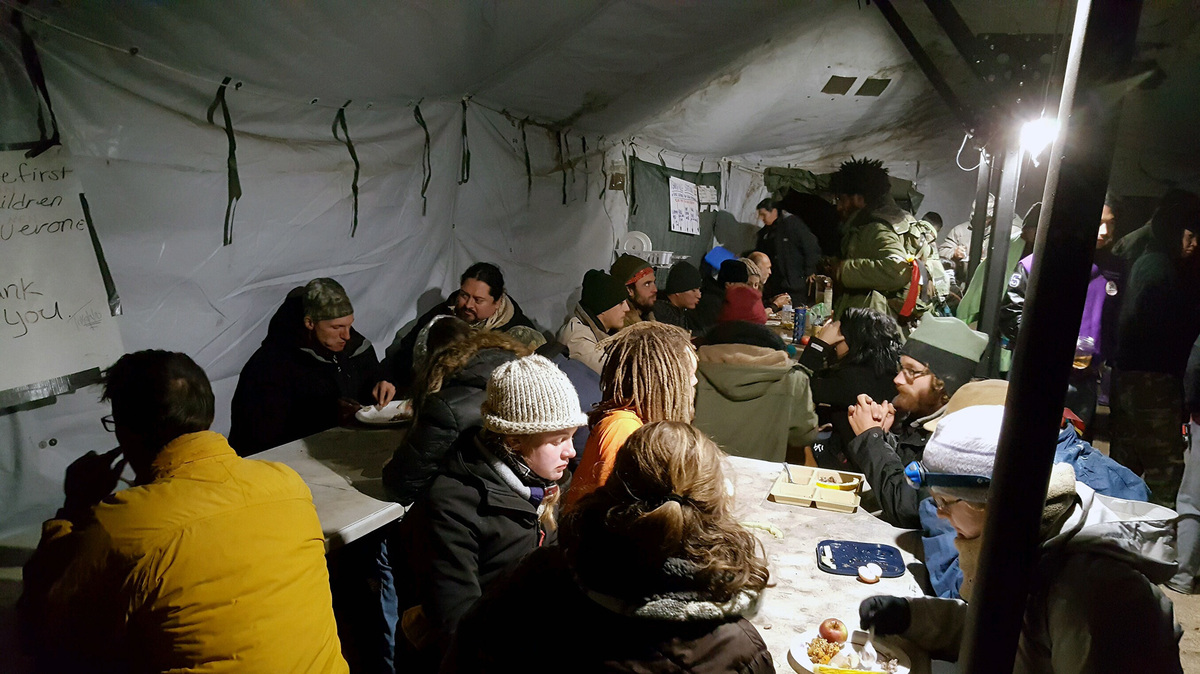 People at the Oceti Sakowin Camp enjoy a meal inside a tent that serves as a dining hall. Oceti Sakowin is the largest of several camps housing demonstrators against the Dakota Access Pipeline.

At the Standing Rock Indian Reservation, as a Sioux tribe fights the construction of the Dakota Access Pipeline, the months-long standoff has raised a question: How do you feed the encamped masses?

For Navajo chef Brian Yazzie, the answer was clear: in a way that honors indigenous traditions.

Yazzie is the chef du cuisine at The Sioux Chef, a Minneapolis-based catering and food education company whose mission is to revitalize Native American food culture, which was marginalized by centuries of colonization and forced assimilation. (The company's name is a nod to its Sioux founder, Sean Sherman.)

For months now, Yazzie says, he's watched the Standing Rock demonstrations unfold from afar and has been wanting to go there.

"Being on the front-lines of revitalizing indigenous foods, my way of contributing to the cause is being in the kitchen and cooking for the people," he says.

So last weekend, Yazzie traveled to the Standing Rock reservation and showed up to volunteer at the main makeshift kitchen that's been churning out meals for protesters living at the Oceti Sakowin Camp. It's the largest of several camps that are housing the demonstrators, who oppose a section of the pipeline that would run under the Missouri River near their reservation.

The tribe says the route crosses sacred land and burial sites, and it's worried that an oil spill could pollute drinking water, which is why protesters call themselves water protectors.

The main camp kitchen, Yazzie says, is housed in three tents. One large tent is used for prep work and cooking, a second serves as a pantry and the third is a dining hall. It's staffed by volunteers, many of whom, Yazzie says, are not American Indians. 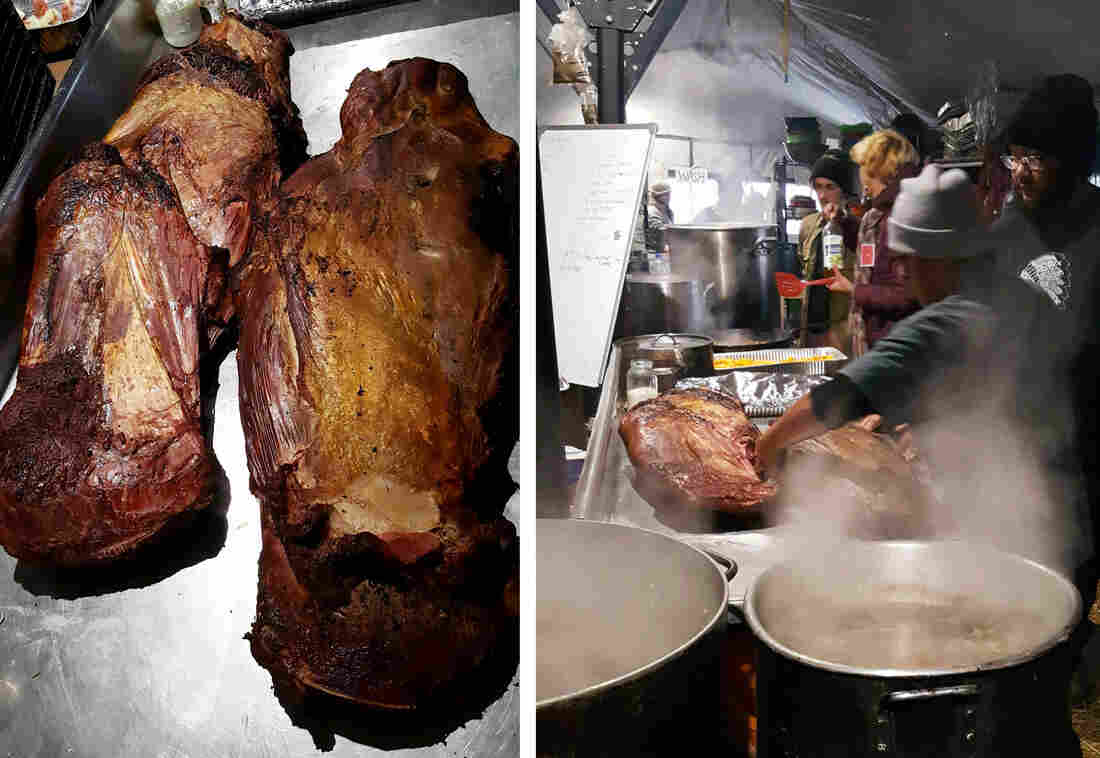 When Navajo chef Brian Yazzie showed up to volunteer at the camp kitchen, he found lots of bison donated by a local tribe. Yazzie (in the foreground at right) used it to cook up a blue hominy and bison soup. Courtesy of Brian Yazzie hide caption 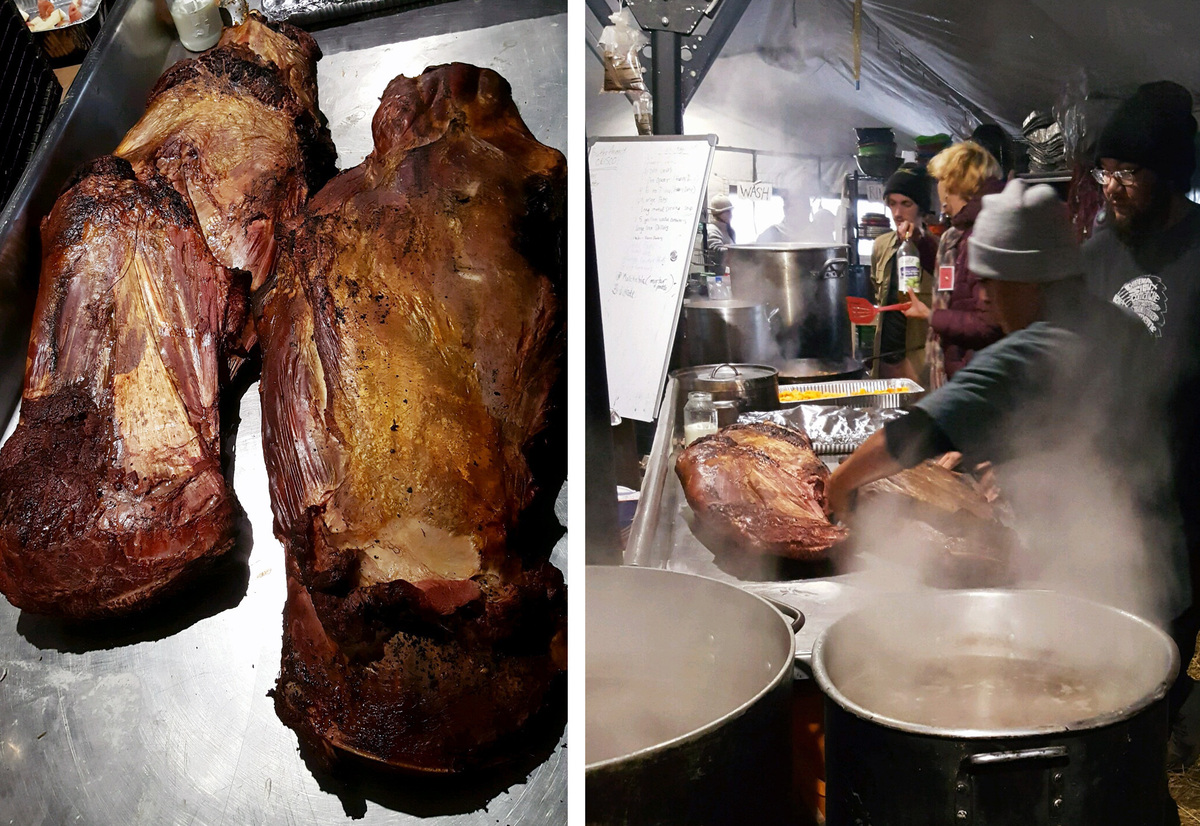 When Navajo chef Brian Yazzie showed up to volunteer at the camp kitchen, he found lots of bison donated by a local tribe. Yazzie (in the foreground at right) used it to cook up a blue hominy and bison soup.

Yazzie offered his cooking services for a couple of days. "With the credentials I had, they gave me the opportunity to take over," he says.

His first stop was the pantry, stocked with donated foods. "When I stepped into the pantry in the tent, that's all I [saw] – a stack of flour just ceiling high," Yazzie says. "Just nothing but canned goods, processed foods."

"As a native chef, it brought back this ancestral memory of survival food, when our ancestors were put on internment camps, when they were put on reservations," he says.

Cut off from their hunting and foraging grounds, many American Indians were forced to abandon traditional diets — and the active lifestyle they required.

"They were given government rations," Yazzie says — commodities like lard, flour, sugar — "and there was no natural resources or natural food to be found."

Today, American Indians are one-and-a-half times as likely as Caucasians to be obese, and they also face high rates of diabetes. Many trace the roots of these health problems to the forced shift in diet that began more than 150 years ago.

But Yazzie also found promising dry goods in the pantry — like beans, hominy and wild rice. And a trailer used as a cooler and freezer held "just a mass amount of bison" donated by a local tribe. "That was beautiful to see," he says.

Yazzie cooked up a vegan three-bean soup, and a second soup of bison and blue hominy, which was donated by the Navajo Nation. The meal was a nod to "traditional flavors," he says.

He also had some fresh produce to work with — rutabaga, parsnips, carrots, sunchokes, which he roasted, and pumpkin, which he sautéed with quinoa and sunflower seeds drizzled with maple syrup.

Dessert was a simple display of fresh melons "donated from the new tribal garden on the Navajo Nation," he says. (Other native chefs volunteering in the kitchen have also cooked traditional indigenous meals, according to Indian Country.) 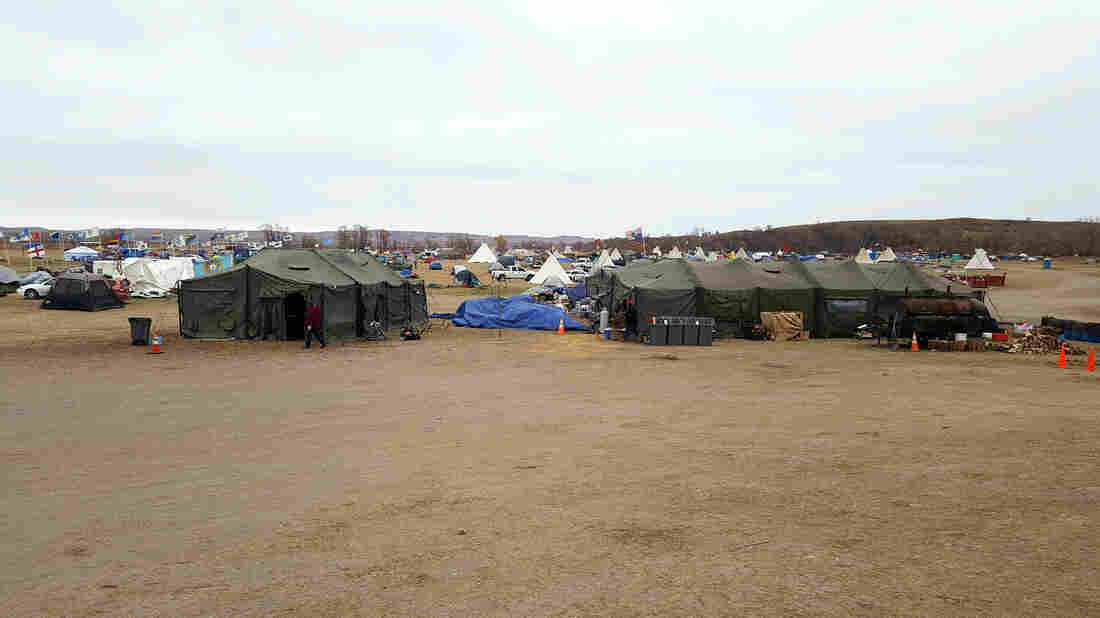 Tents at the Oceti Sakowin Camp. Yazzie estimates he saw about 1,500 people at the camp last weekend. Courtesy of Brian Yazzie hide caption Tents at the Oceti Sakowin Camp. Yazzie estimates he saw about 1,500 people at the camp last weekend.

On tribal lands, Yazzie notes, much of the available food is processed, though "tribal gardens are popping up on reservations now. They're bringing back their ancestral food — these seeds that were saved for hundreds of years are finally being planted again and being given to the community."

Yazzie and Sherman are among a growing number of American Indian chefs and historians around the country who are working to raise awareness about indigenous ingredients and cooking techniques as a way to reclaim identity and cultural heritage. But Yazzie says that message was still new to many of the people he encountered at Standing Rock, both native and non-native.

One night, when he was cooking a wild rice side dish at the camp kitchen, he says, a volunteer brought him a tub of butter to flavor it with. "I told the person, 'I don't need butter.' "

Like other Native American chefs who are restoring traditional cuisine, Yazzie avoids dairy because it was not part of the precolonial diet of indigenous peoples. When he explained this to volunteers, he says, it piqued their interest.

But Yazzie says he was mostly focused "on feeding people – just finding what was there and what's healthiest to serve them."

Official counts of the number of encamped protesters are hard to come by, because people come and go frequently. Yazzie estimates he saw about 1,500 people there, with the main kitchen feeding about 1,000 people a day during his stay at Oceti Sakowin camp. (There are two other, smaller kitchens at the camp, he says.)

Now he's trying to spread the word to gather more donations of healthy foods for the protesters. He plans to go back to cook at the camp for Thanksgiving.

"I can't just sit back and do nothing," Yazzie says. "With the network I have, I'm doing what I can to support the cause."