Accessibility links
In Ancient Trash Heaps, A Whale Hunting Puzzle Emerges : The Salt New DNA evidence from a 4,000-year-old archaeological site along the coast of Greenland suggests the paleo-Inuit or Saqqaq culture ate large amounts of whale. But how? 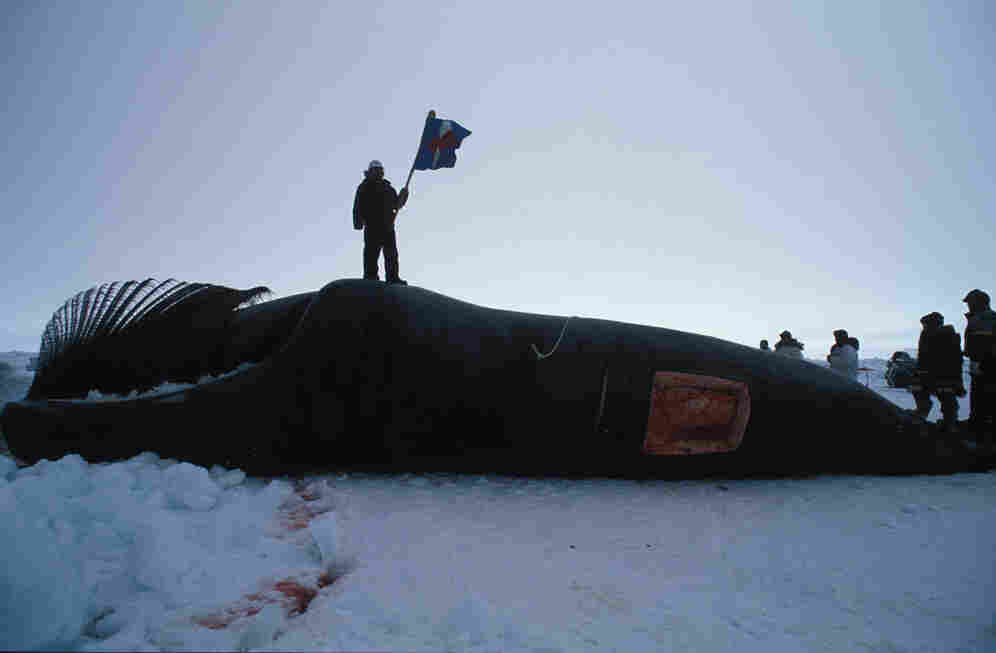 A member of a whaling crew waves a flag at the start of the butchering of a just-captured bowhead whale in the outskirts of Barrow, Alaska, in 1998. Luciana Whitaker/CON/LatinContent/Getty Images hide caption 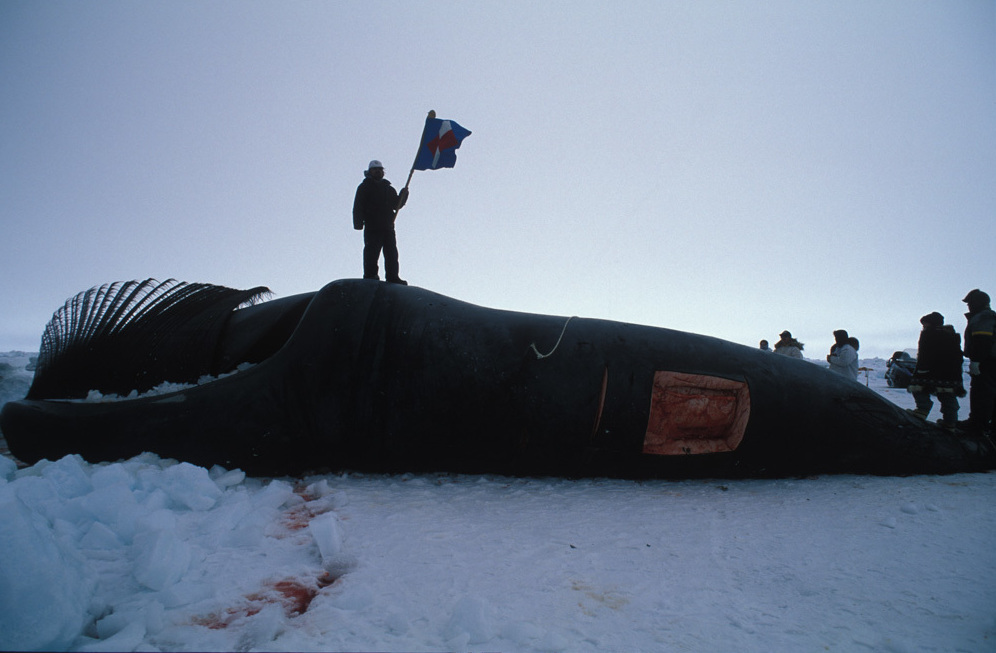 A member of a whaling crew waves a flag at the start of the butchering of a just-captured bowhead whale in the outskirts of Barrow, Alaska, in 1998.

In excavated waste heaps along the western coast of Greenland, researchers have found evidence that ancient Greenlanders, known as the paleo-Inuit or Saqqaq, may have been eating large amounts of bowhead whale. But these 4,000-year-old "dumpsters" are from millennia before humans had specialized technology to hunt down such massive prey.

The pits are filled with the bones from other animals, like harp seals and caribou, but barely any whale. Out of around 100,000 excavated bones, only a mere hundred fragments were identified as bowhead whale parts — perhaps three bones in total. But in the greasy soil, an analysis revealed a great deal of bowhead whale DNA. About half of the mammal DNA recovered from two of these ancient trash piles are from bowhead whales, researchers report in Nature Communications on Tuesday.

"That was a surprise, definitely," says Frederik Seersholm, a geneticist at the Natural History Museum of Denmark and Curtin University in Australia. It's enough DNA that it suggests ancient Greenlanders must have been eating large amounts of whale, the team thinks.

"The archaeologists have found a lot of harp seal. It was several thousand harp seals they were killing [a year], and apparently it's just as much whale by volume," Seersholm says. "My idea of it is they would have had to go out looking for them."

But, without the large multiple-person vessels, specialized harpoons and floats that came to the Arctic some millennia later, it would have been extraordinarily difficult for the Saqqaq culture to hunt animals as large as bowhead whales, Seersholm says. At best, the Saqqaq might have had small, single-person kayaks and small spears or lancers.

"In old hunting methods from a hundred years ago, people described coming up behind the whale," he says. If Saqqaq hunters were to have ventured out to sea in kayaks, Seersholm says they would have to have had small teams.

Maneuvering against the wind and tide, hunters can avoid detection and creep up on resting whales at the surface. "If you stab it with the lance just below the flipper, you can hit it straight into the heart," Seersholm says. "With just small boats and three men, you should be able to kill them."

Then, after dragging the whale on land, people would butcher it and carry the meat and blubber back to the settlement for consumption and leave the heavy bones behind, explaining the lack of whale bones from the excavation.

"The DNA is fascinating. The science is indeed impressive," says Brooke Milne, an anthropologist at the University of Manitoba who was not involved with the work. But the interpretation that Saqqaq peoples were actively hunting bowhead whales is a bit fishy, she thinks.

For one thing, hunting a bowhead whale in this fashion would have been incredibly dangerous. "Imagine them going out into open water in small watercraft, making the assumption they had seaworthy kayaks, to spear a 50-ton whale behind the flipper," Milne says. "What would happen if they went in the water? What if [the whale] destroyed the boat? You'd lose these crucial members of your society. [The hunters] would drown in the frigid water."

The Saqqaq roamed the Arctic in very small groups that would struggle to survive after the loss of a hunter or a team of hunters, Milne says. "I can see going after smaller whale like beluga or narwhal. But if you have a small population, why would you even go after that higher-risk quarry when you have equally reliable, lesser-risk animals?" For that reason, Milne thinks if the Saqqaq were consuming bowhead whales, "it's more likely scavenging a dead or beached whale."

And there are still a few key missing items. For example, there was little baleen, the fibrous teeth bowhead whales use to filter feed and which are made of a valuable and tough, sinewy material. And the stone tools that the Saqqaq used are mostly made of flint, which quickly gums up with fat when butchering a massive, blubbery animal like whale.

And finally, Milne says that it's not impossible that oils from dead whales seeped into the archaeological sites over the years — making this a case of contamination rather than evidence of whale dinners.

Even so, bowhead DNA is still in those ancient waste heaps. Whether early Greenlanders were hunting them or scavenging them off the beach is an open question, says Marcello Manino, an archaeologist at the University of Aarhus who was also not involved with the study. He says it's exciting that the question is there at all.

"Sometimes the recoverable remains are not giving us the full picture of what might have been taken back," he says. Analyzing DNA in the soils has helped fill that picture in. "This is the first case study like this that I know of, and I'm sure it will be applied more now that we know what the potential is."

For example, perhaps researchers can look for mammoth DNA in ice-age trash piles. "It could be another case where a lot more mammoth meat was being consumed than we might think from the actual bones," he says.

Like whales, those too might be so large that people would only have carved off the meat to carry back. "That's why this is so interesting. It could open up a new kind of research," Manino says.