Accessibility links
Grapefruit And Salt: The Science Behind This Unlikely Power Couple : The Salt Ad campaigns of the first and second world wars sold Americans on this surprising pairing. Despite a rocky history of breakups, these two flavors have chemistry that cannot be denied.

Grapefruit And Salt: The Science Behind This Unlikely Power Couple

Grapefruit And Salt: The Science Behind This Unlikely Power Couple 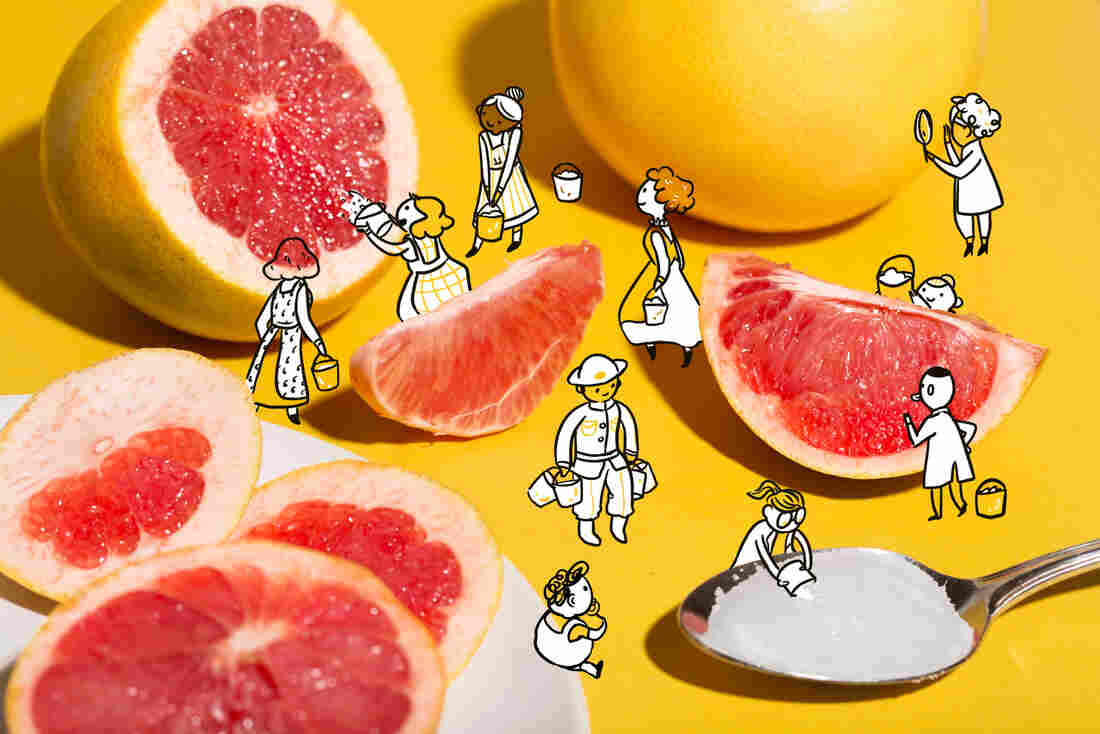 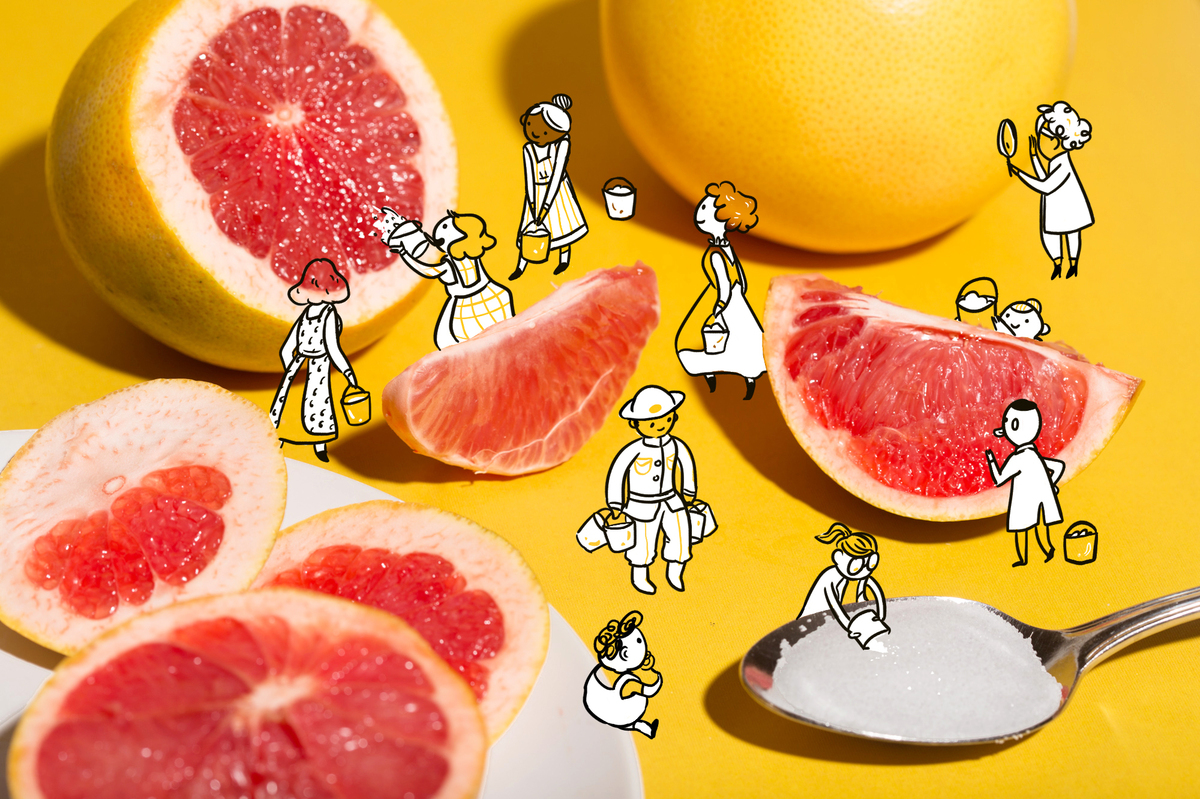 Grapefruit's bitterness can make it hard to love. Indeed, people often smother it in sugar just to get it down. And yet Americans were once urged to sweeten it with salt.

Ad campaigns from the first and second world wars tried to convince us that "Grapefruit Tastes Sweeter With Salt!" as one 1946 ad for Morton's in Life magazine put it. The pairing, these ads swore, enhanced the flavor.

In our candy-crushed world, these curious culinary time capsules raise the question: Does salt really make grapefruit taste sweeter? And if this practice was once common, why do few people seem to eat grapefruit this way today?

Turns out, grapefruit and salt did have a history together. But, like a sham romance between co-stars dreamed up by Hollywood publicity departments to boost studio revenues, the pairing of the two in midcentury advertisements seems to have largely been manufactured buzz, hyped by companies with an interest in increasing sales of both products.

Still, this doesn't mean the chemistry between salt and grapefruit isn't real. It is, and there's science to prove it.

The origins of our grapefruit habit

Grapefruits are relatively new to this earth, a hybrid formed from the spontaneous union of two foreign transplants — the Javanese pumelo and the East Asian sweet orange — in Barbados in the middle of the 18th century. First grown commercially in Florida at the end of the 19th century, grapefruit quickly went from being a novelty to being a daily necessity and made fortunes for farmers.

But how to eat it? When new kinds of foods like grapefruit become available, consumers have to figure out what to make of them. 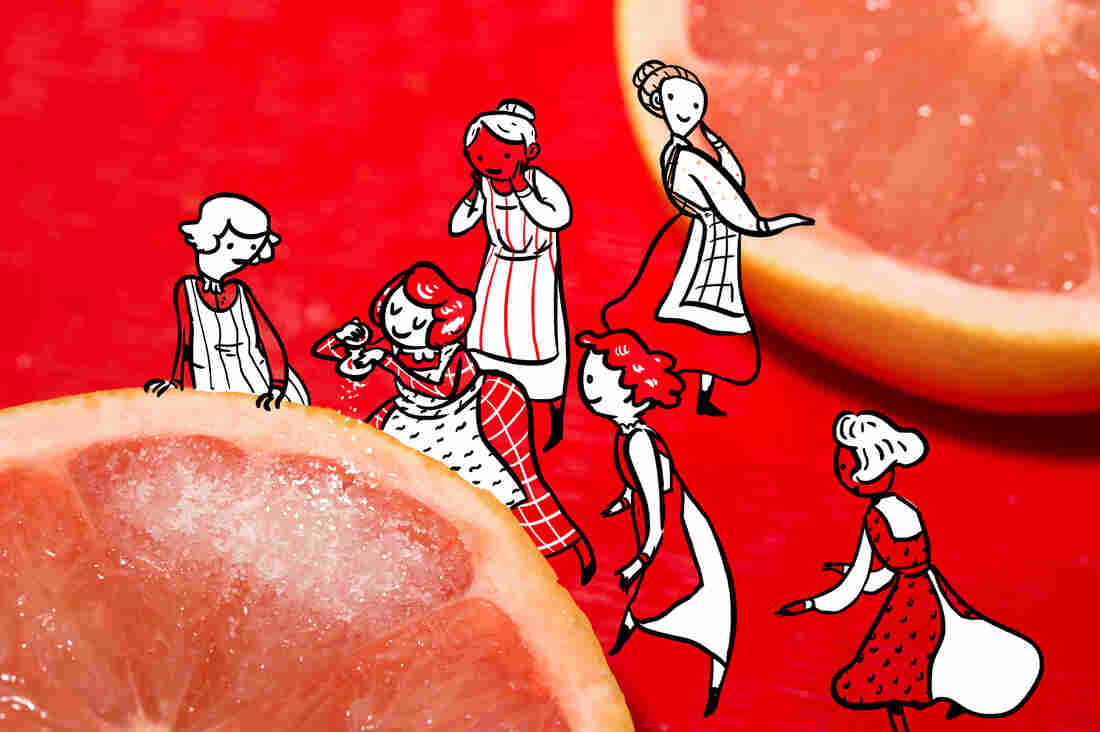 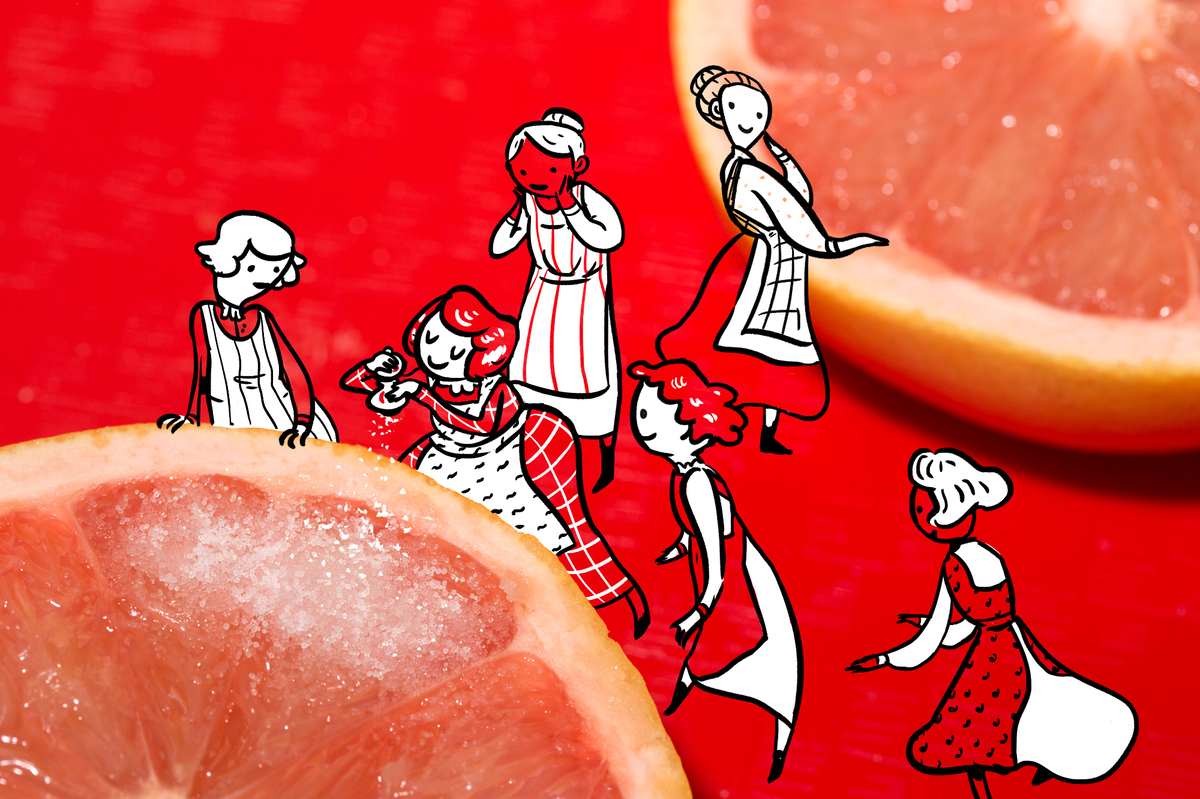 Early 20th century cookbooks and recipes in magazines offered an abundance of ways to use grapefruits in sweet confections, as well as in savory-sweet salads. But the most common option was the one that's still familiar to us today — at breakfast, chilled, sliced in half, sprinkled with sugar and (optionally) crowned with a bright-red candied cherry.

Even then, though, salted grapefruit had its cheerleaders. In 1911, an Iowa woman calling herself "Gude Wife" wrote in to the "The Housemother's Exchange," a national advice column, to recommend salting grapefruits. "Salt neutralizes the bitter taste as well as the acidity," she advised. Others wrote in to back up this endorsement. "I think you will find that many Southerners always salt their grapefruit," wrote "M.B.L." from Philadelphia. "I am sure that if you once try it you will agree with me that it is good." In fact, salting fruit remains a regional practice alive and well in the South.

But when World War I disrupted the global sugar supply chain, causing sugar shortages and skyrocketing prices, grapefruit sales plummeted. Americans were apparently reluctant to eat the fruit if they couldn't drown out its pungency with sugar.

Panicked, the Florida Citrus Exchange, in an effort to boost sales, launched a national advertising campaign in 1919 to convince Americans that grapefruit "need no sugar, and never should have much." After the sugar crisis ended, so did the campaign. But when World War II came along, and sugar once again became scarce, salt and grapefruit's high-profile romance was rekindled — this time by salt manufacturers.

"Vitamin-rich Grapefruit — a 'Victory Food Special' — is one of the fruits Uncle Sam advises you to eat," explained one 1943 ad from Morton's Salt.

Ads like this made an overt appeal to patriotic sentiments. Eating grapefruit with salt was a way civilians could support the war effort, both by consuming nutritious, domestically grown food, and by limiting their use of rationed sugar. The campaign proved so successful that it continued into the 1950s, long after rationing had ended.

The science behind adding salt for sweetness

Even as salt-makers boasted about the taste-enhancing effects of salt on grapefruit, they were at a loss to explain just why the combination worked.

It wasn't until the mid-1990s that Gary Beauchamp and Paul Breslin at the Monell Chemical Senses Center in Philadelphia began to unravel the complex, dynamic process through which salt transforms and enhances flavor. By testing the interaction between three taste sensations — salty, bitter and sweet — they found that salt increased the perception of sweetness by diminishing our ability to taste bitterness.

Beauchamp, now emeritus director of Monell, explains that this is because of the ions in the salt, which block many of the receptors on our tongues that detect bitterness.

But would reducing bitterness make something taste sweeter? Our sense of taste doesn't just play out on the surface of our tongues. Our brains receive signals about what we eat from our mouths, noses, eyes, ears and skin, integrating and interpreting these different messages to produce the complex, multisensory experience that we know as flavor. There is strong evidence that, at this cognitive level, bitterness and sweetness inhibit each other. In other words, the more bitter something tastes, the less sweet we perceive it to be, and vice versa.

Grapefruit is rich in bitter-tasting plant compounds, especially one called naringin. By diminishing our tongue's ability to sense naringin and other bitter compounds, salt also produces a secondary cognitive effect, which we perceive as "a relative bump in sweetness," according to Breslin, a professor of nutrition at Rutgers University.

Something else might be going on, too, he says. Salt changes the chemistry of water. In a watery food like grapefruit, the addition of salt makes it easier for volatile molecules — the chemicals responsible for odor — to launch themselves into the air, where we can breathe them in and smell them, intensifying our experience of the fragrance of the fruit. So that enhanced scent might heighten our enjoyment as well.

But there's much we still don't know about how salt affects flavor, Beauchamp and Breslin both stress. "Of all the taste mechanisms," Beauchamp says, "salt has been the most intractable — the most difficult to understand. It is still not fully understood."

Yet other cultures have long embraced the beauty of pairing salt and fruit.

In Mexican and border cuisines, it is common to douse fruits (especially mango) with a combination of salt, chili powder and lime. Similarly, salting fruit like guava or, say, an unripe mango is common practice in India. Thai prik-kab-klua combines salt with the heat of fresh red chilies and sugar, and is served on tart fruits. Chinese li hing powder, a puckery mauve mixture based on salted, pickled dried plums, is often sprinkled on apples and pineapples.

This ain't your grandma's grapefruit

So why does the practice remain relatively uncommon in the U.S.?

In the case of grapefruit, the explanation may lie not with the salt, but with the fruit. We are eating different kinds of grapefruit than Americans were eating in the 1940s and 1950s. Generally speaking, as the 20th century progressed, grapefruits became redder, sweeter and more completely seedless.

Currently, about three-quarters of the grapefruits that we eat are red. Redder grapefruits contain less naringin, and therefore taste less bitter. This means that there is less of an incentive to curb bitterness with a dash of salt.

There may be another reason. Between 1950 and 2000, more and more processed foods got a boost in sweetness from high-fructose corn syrup and other refined sweeteners. So adding sugar may have increasingly seemed like the right solution to many domestic culinary quandaries.

Ripe for a reunion?

Since the turn of the millennium, however, the use of caloric sweeteners has steadily declined. Perhaps years of public health warnings about the consequences of excess sugar consumption are starting to change attitudes toward sweetness. Meanwhile, new federal government regulations requiring manufacturers to disclose added sugars on labels are driving food companies to reformulate their products.

In other words, is this the perfect moment for grapefruit and salt to get back together? With the Brangelina breakup, we could all use a new power couple to look up to.

Nadia Berenstein is a historian of science and technology, currently working on a history of synthetic flavors. She tweets at @thebirdisgone.