Accessibility links
Assassin's Steak Tartare: Popular Detective Series Gets Its Own Cookbook : The Salt The Yashim detective series features an intrepid sleuth chasing mysteries in 19th century Istanbul. He cooks while he puzzles over clues. Readers who clamored for the recipes have gotten their wish. 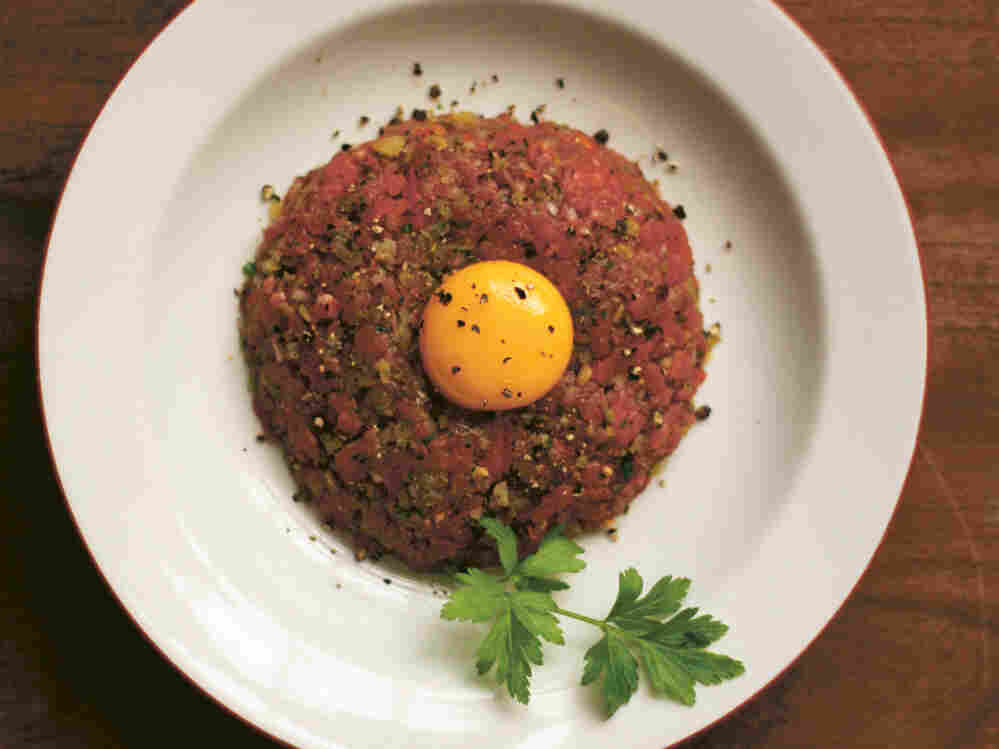 Assassin's Steak Tartare, one of the recipes from Yashim Cooks Istanbul, inspired by the dishes cooked by the lead character in the popular Yashim detective series of books. Jason Goodwin hide caption 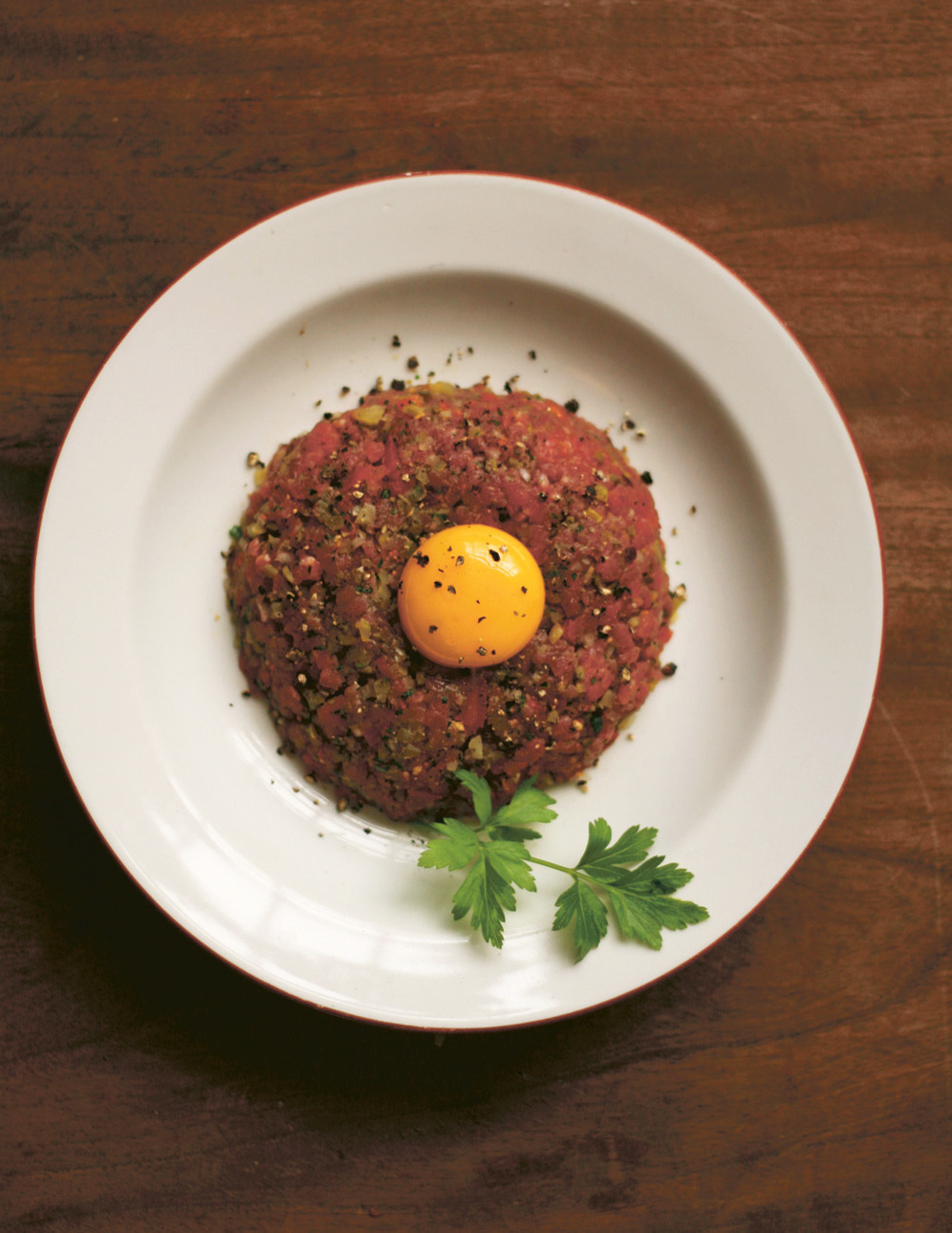 Assassin's Steak Tartare, one of the recipes from Yashim Cooks Istanbul, inspired by the dishes cooked by the lead character in the popular Yashim detective series of books.

I was boarding a plane to Istanbul when a friend recommended the Yashim series of mystery novels.

Great reads, he told me, about a Turkish detective who whips up marvelous feasts in between solving crimes. That sounded promising, so I downloaded the first book for the flight. And I was hooked, racing through chapters with Yashim as he prowls Istanbul's dark alleys, spice markets and kitchens.

As he puzzles over clues, Yashim does indeed cook. Garlic sizzles, lamb browns, and by the time Yashim solves the crime, he has also put dinner together. Sometimes it's a simple fish stew. Other nights, it might be Assassin's Steak Tartare, or Wild Duck Ottoman Style, or Sultan's Ramadan Eggs.

Hungry yet? I was.

In the novels, new recipes pop up often enough to leave readers perpetually ravenous. In fact, many readers wrote author Jason Goodwin to beg for the recipes.

He was listening, and the result is the new cookbook Yashim Cooks Istanbul. In an interview, Goodwin told me he didn't start out planning to make his protagonist a chef. But he says it has proven useful for plot development.

"He's chopping his onion, and he's thinking over ... that Russian woman he's just interviewed — was she telling the truth? As a writer, it's really useful to have something like that. It's a sort of shtick for Yashim to have something to do." 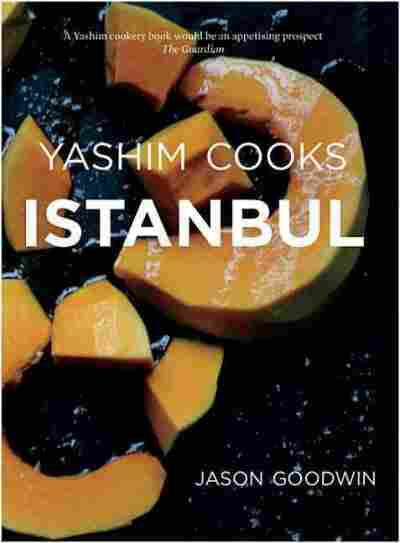 Culinary Adventures in the Ottoman Kitchen

Goodwin, who has now published five Yashim mysteries, is not Turkish but British. He lives in Dorset, near the sea on England's southern coast.

He says he'll never forget his first taste of real Ottoman food. He had decided to take a hiking holiday, and he ended up walking from Poland to Istanbul. It took him months. He says he could tell he was heading the right direction because the coffee kept getting stronger.

"With all respect to Eastern Europe, the food goes up and down there," Goodwin says. "There's quite a lot of potato. And there was this atmosphere as we approached the city [Istanbul] on foot. This was, I don't know, 25 years ago.

"And we burst into Istanbul, and flavor burst in on our lives! It was so extraordinary. We went into the Grand Bazaar and there was a little cafe. And we sat down and we had chicken with eggplant and mint, all wrapped in paper, and you unfolded it on the plate. ... I can smell that mint now."

The story of Istanbul and its food has become the story of Goodwin's life. He wrote a book about that journey on foot. Next he wrote a history of the Ottoman Empire.

"And then I cast about," Goodwin says. "And I thought, that Dan Brown, he's got an idea. I could follow that. And before I knew it, I was writing a detective story set in Istanbul."

Jason's detective hero, Yashim, operates in 19th century Istanbul, from the years 1836 to 1842. At that time, the kitchens of Topkapi Palace, the Sultan's primary residence, fed as many as 10,000 people a day.

"There were literally hundreds of chefs, working in these very beautiful kitchens, which you can still see in Topkapi," Goodwin says. "There are 10 of these great domed chambers."

And how different was what people cooked and ate in 19th century Turkey from food today?

"Fundamentally, good cooking is good cooking," Goodwin says. "Of course, there are fads and fashions. In modern Istanbul, for example, you won't find coriander — what you call cilantro in the States. Whereas in the Ottoman Empire, that was a very common flavoring."

Goodwin says he tried to make the recipes in Yashim Cooks Istanbul authentic — to a point.

"I'm not an authenticity junkie. This isn't an exercise in historical re-enactment. I'm too greedy!" laughs Goodwin. "I've got four kids, so meals at our house come round with monotonous regularity. You need to think of something that's practical and possible every night."

But Goodwin says the main challenge his fictional hero faces is this: Just when he gets going on a recipe, a plot twist often intervenes to distract him.

"The trouble with poor Yashim is that quite often he's cooking his dishes and everything's going quite swimmingly, and then there's a knock on the door, and it's an assassin from the palace who's come to strangle him. So then he gets involved in a battle with him, and then the cooking goes out the window, sometimes literally."

That is exactly what happens in a scene from the first Yashim novel, The Janissary Tree. Yashim has returned home after a long day fighting crime and decided to make pumpkin soup. Here's how the scene unfolds in the novel:

"He dropped the stock vegetables into a pot, added water from the jug, and settled it on the back of the stove to reach a simmer. He slid a ripple of olive oil over the base of a heavy pan and chopped onions, most of the leeks, and some garlic cloves, putting them on to sweat. Meanwhile with a sharp knife he scalped the pumpkin, scooped out the seeds and put them aside. Careful not to break the shell, he scraped out the orange flesh with a spoon and turned it with the onions. He threw in a generous pinch of allspice and cinnamon, and a spoonful of clear honey. After a few minutes he set the pan aside and dragged the stockpot over the coals."

Stock is bubbling gently on the stove, and a jet of fragrant steam has scented the room with a short hiss, when there's a knock at the door. Yashim scrambles to his feet and flings back the door to find a young man. He is kicking off his shoes, and in his hand he carries a silken bow string, looped around his fist.

"He hasn't come for dinner," says Goodwin, pausing after reading the scene aloud to me. "He has come there to make sure that Yashim's investigation goes no further."

In the novel, mayhem ensues. In the cookbook, there's a happier ending. Goodwin's recipe for pumpkin soup turns out dark orange and rich.

"I serve it with just a spoonful of Greek yogurt which has been slightly diluted, and a little squeeze of lemon juice, and a sprinkling of parsley," he says. "Yashim would be highly satisfied."

Whereas, I'm already thinking ahead to dessert. Maybe the recipe on page 151: Palace Fig Pudding. 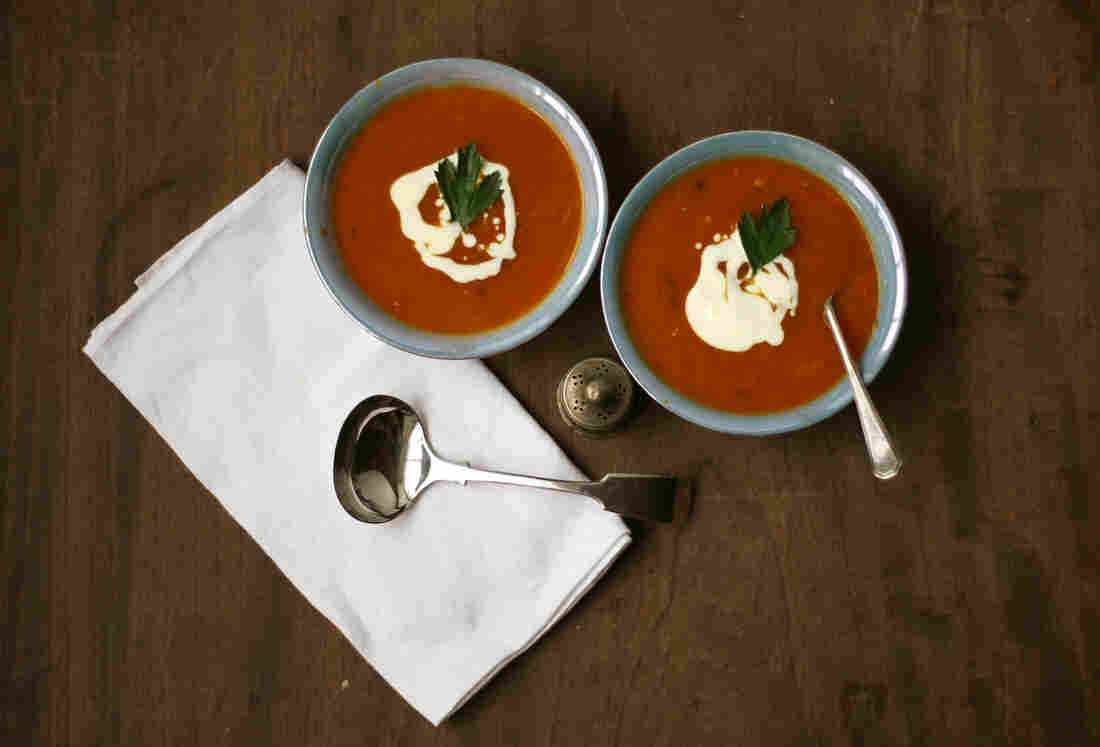 This recipe for pumpkin soup is featured in an action scene in the first Yashim novel, The Janissary Tree. Jason Goodwin hide caption 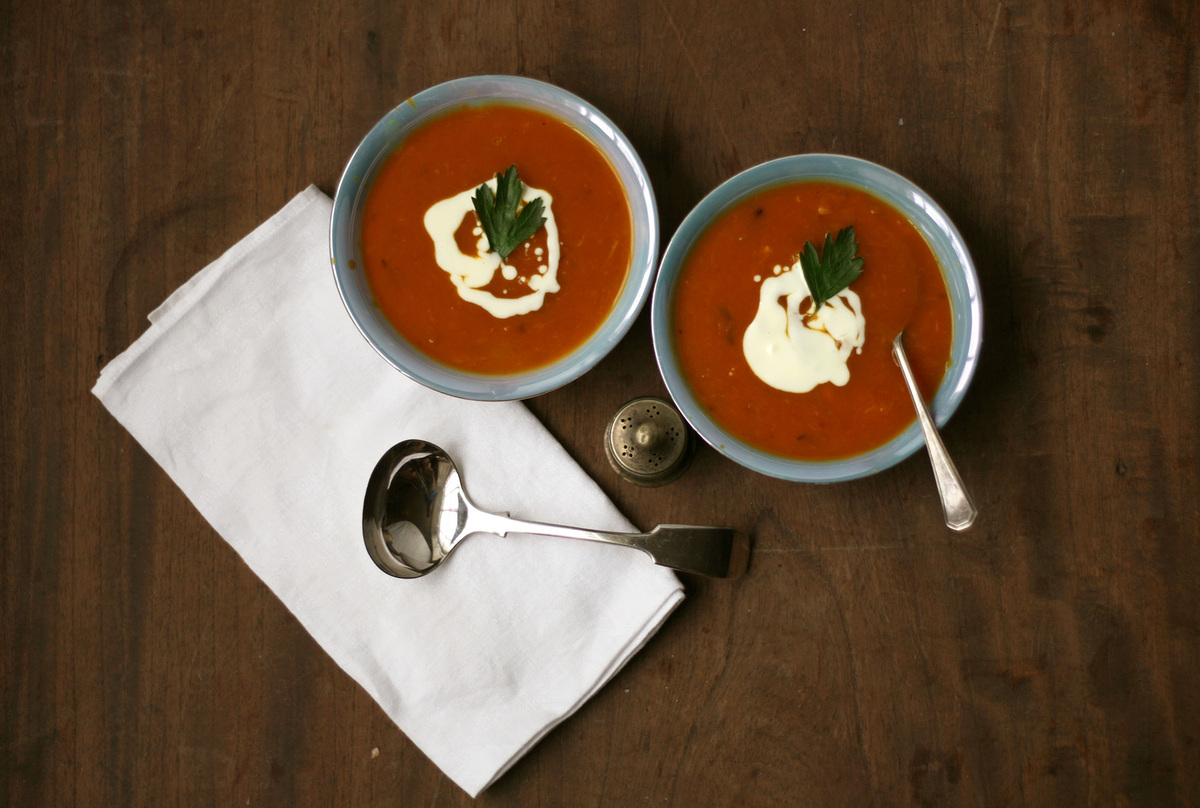 This recipe for pumpkin soup is featured in an action scene in the first Yashim novel, The Janissary Tree.

Pumpkins have a rustic reputation belied by their appearance in this silky and sophisticated dish, which is happily very easy to rustle up. You could roast the pumpkin first, rubbed in oil and salt.

Melt the butter in a saucepan and turn in the pumpkin and onion, stirring them for a few minutes on medium heat.

Add the sugar, pour in enough stock to surround but not drown the pumpkin, bring to a gentle simmer and cook, covered, for 15 minutes until the pumpkin is soft.

Mash the pumpkin with a potato masher or a blender and return to the pan. Add salt, pepper, and stock and bring it up to heat to simmer for a few minutes. Stir the soup and check the seasoning and consistency.

Serve with a neat drizzle of yoghurt, and a sprinkling of parsley.

The Tartars were like little brothers to the Ottomans. In wartime they rode on their hardy steppe ponies deep into enemy territory, sometimes as far as the banks of the Rhine. On these journeys they galloped without pause until, at a signal from their khan, they wheeled round and began making for their homeland in the Crimea, loading themselves with slaves and booty. They cured meat under their saddles, pounding it soft and fine, which they devoured raw. Get your beef absolutely fresh from a reputable butcher.

The bacteria that might kill you lies on the outer surface of the meat, so having bought your fillet, you must take a very sharp knife and boldly slice away its outer edges all round.

Start afresh with a clean board and a clean knife. If you have a mezzoluna, so much the better. Chop the herbs and vegetables very fine. Sprinkle them with salt, and put them into a bowl.

Set the steak on the board and slice it as fine as you can, across the grain to begin with. Stack the slices together, squeeze them lightly, then slice them again, lengthways. Turn the board ninety degrees and press the fillet strips together again — they are almost as soft as putty, and cut smoothly when they are squeezed together. So finally cut them up in the opposite direction, as small as you can. Don't mash them: you want soft crumbs of steak, not a paste.

Slide the chopped steak into the bowl with the herbs, chilli and vegetables, and mix well. Check for salt.

Scoop the steak tartare onto a plate, and make a depression at the top with the back of a soup spoon. Separate an egg yolk from the white and tip the yolk into the dip.

Grind black pepper over the plate. It's very good with toast.

This pudding dish was a palace staple, very easy on the chef but utterly delicious — especially made with soft dried figs available particularly to sultans.

With the stem uppermost, cut each fig horizontally almost in half, without actually severing them.

Soak the figs in warm water for 30 minutes. Save the water.

Break the walnut halves into pieces, not too small, and stuff some into the middle of each fig. Close the figs and stand them side by side in a shallow saucepan.

Stir the sugar into the warm figgy water and pour it over the figs, with the cinnamon sticks and a small pinch of salt. Set on a high heat and bring the liquid to the boil, then lower the heat and simmer the figs gently for 20 minutes or so, covered, until the liquid is syrupy. Let them cool.

Serve the figs at room temperature, with the syrup drizzled on top and a sprinkling of chopped walnuts.