Accessibility links
The Story Behind The 'Tea And Oranges' In Leonard Cohen's Song 'Suzanne' : The Salt Cohen's friend Suzanne Verdal fed him a black tea with pieces of orange rind in it. That tea is Constant Comment, sold by the Bigelow Tea Co. First sold in the 1940s, it remains popular even today. 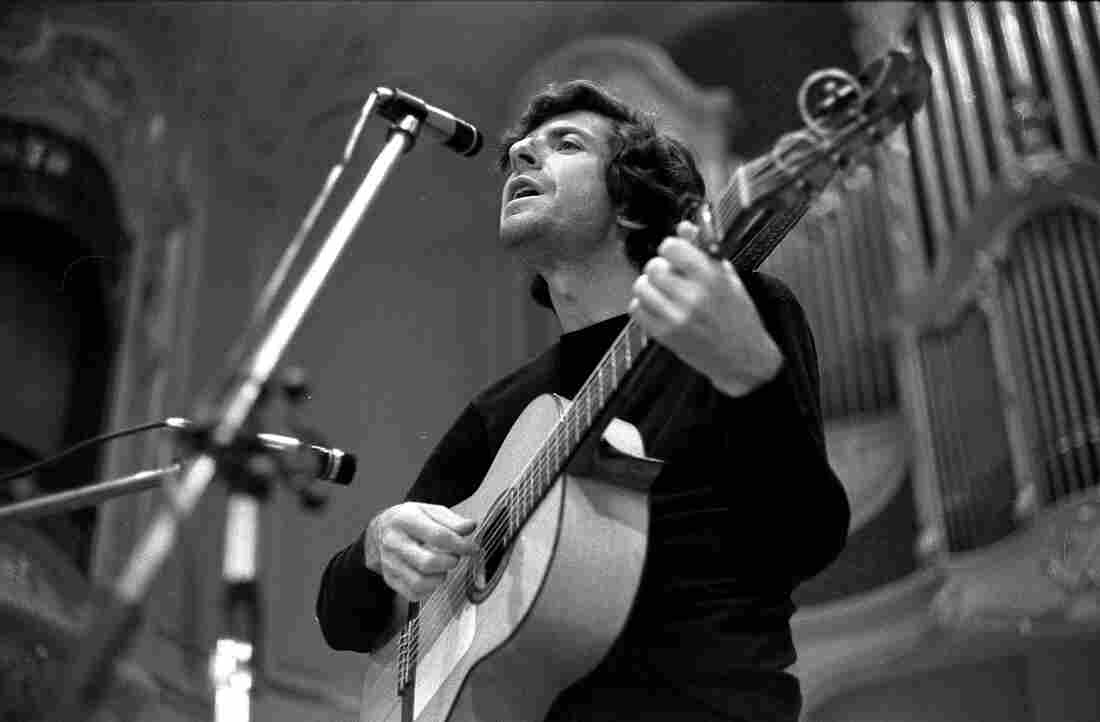 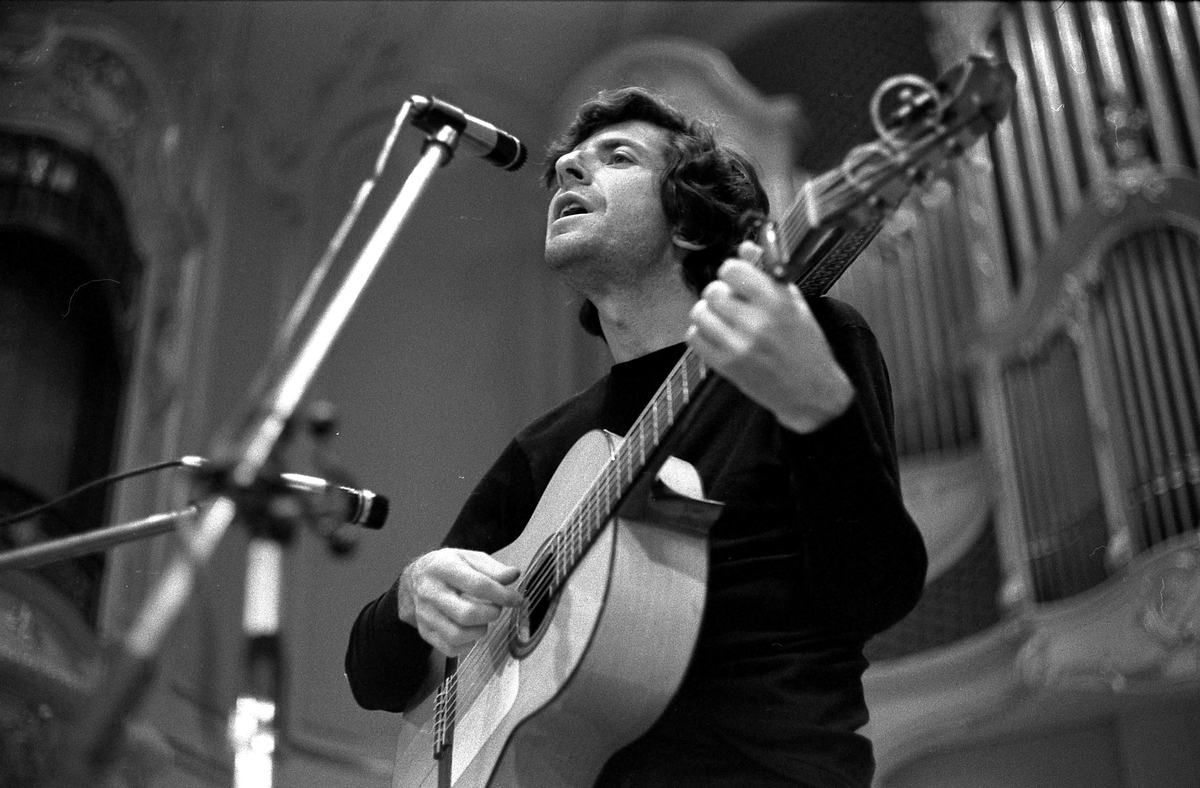 Leonard Cohen performs on stage at the Musikhalle in 1970 in Hamburg, Germany.

In the summer of '65, Leonard Cohen, the great poet-singer who died last week, spent many happy hours in a warehouse by the St Lawrence River in his hometown, Montreal. As he watched the boats go by, his friend, a young bohemian dancer named Suzanne Verdal, whose warehouse it was, served him tea and oranges that came all the way from China.

Or so he famously sang in his 1967 debut single, "Suzanne." The haunting ballad would launch Cohen's musical career, taking him from a minor poet and novelist to one of the great songwriters of our time. Tinctured with melancholy, the song touches on love, longing, redemption and faith. It has a mystical quality, but Cohen insisted it was pure journalism. He had simply reported what had happened in that warehouse and set it to music.

So did Suzanne really serve tea and oranges? In more than one interview, Cohen was asked what exactly was meant by those fragrant lines:

His answer never varied: "She fed me a tea called Constant Comment, which has small pieces of orange rind in it, which gave birth to the image."

He was in fact referring to a store-bought tea manufactured by the Connecticut firm, Bigelow Tea Co. All Cohen had done was deconstruct it into its component parts and whimsically garnish it with a China connection.

Disappointingly prosaic? It might have been, except that Constant Comment has an origin story infused with all the romance of the American entrepreneurial spirit. A child of the Great Depression, this tea would be the founding product of what is one of America's leading specialty tea companies today.

It was created by Ruth Campbell Bigelow, the grandmother of the company's current CEO, Cindi Bigelow. Ruth was a successful interior designer till the Great Depression dealt a body blow to her business. 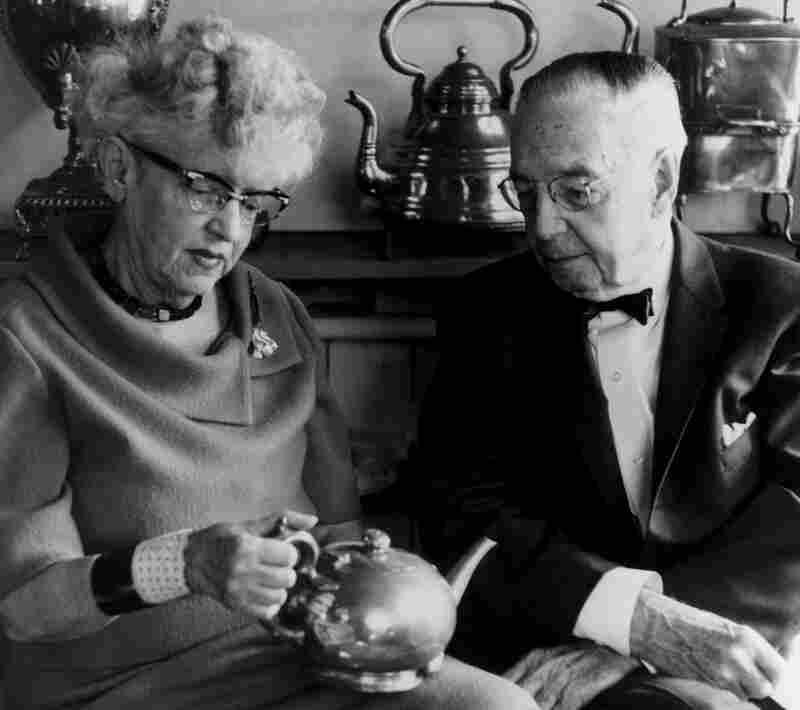 Constant Comment creator Ruth Campbell Bigelow with her husband David. She developed the formula in the kitchen of her New York brownstone. Courtesy of Bigelow Tea hide caption 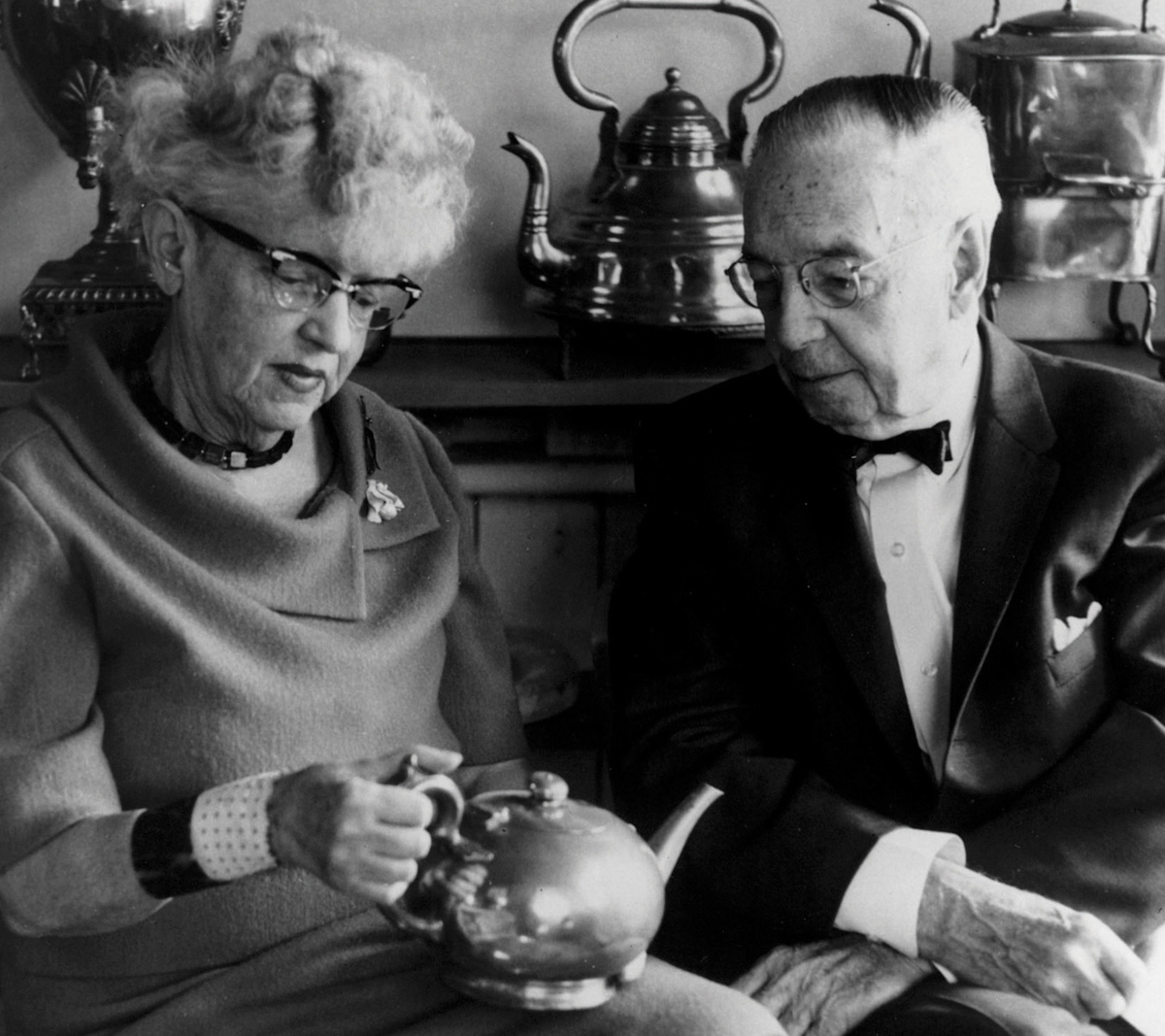 Constant Comment creator Ruth Campbell Bigelow with her husband David. She developed the formula in the kitchen of her New York brownstone.

"My grandparents literally had no money," says Bigelow. "They had to move to an inn for some time. Those years were very hard."

In 1945, Ruth chanced upon an old colonial tea recipe to make tea in stone containers, flavored with orange peel and sweet spices. She disappeared into the kitchen of her New York brownstone on 50th Street — they'd bought the dilapidated apartment cheap — and began experimenting. She worked at it for weeks. Finally, when she served it to her friends, she was so pleasantly taken aback by the flood of warm comments, she decided to call it Constant Comment.

At the time, America had only black tea and green tea. Ruth would pioneer the concept of specialty teas. However, despite the glowing reviews from her friends, establishing her new orange tea in the market proved to be an uphill slog.

It was first sold in squat tins wrapped in gold foil to specialty stores and boutiques. Since the family couldn't afford a colored label, Ruth's husband and son, David Sr. and David Jr., sat up every night painstakingly hand-painting the green background and red dresses of the two ladies on the label shown drinking tea. In the morning, the tins were loaded into the family station wagon and sold store by store. 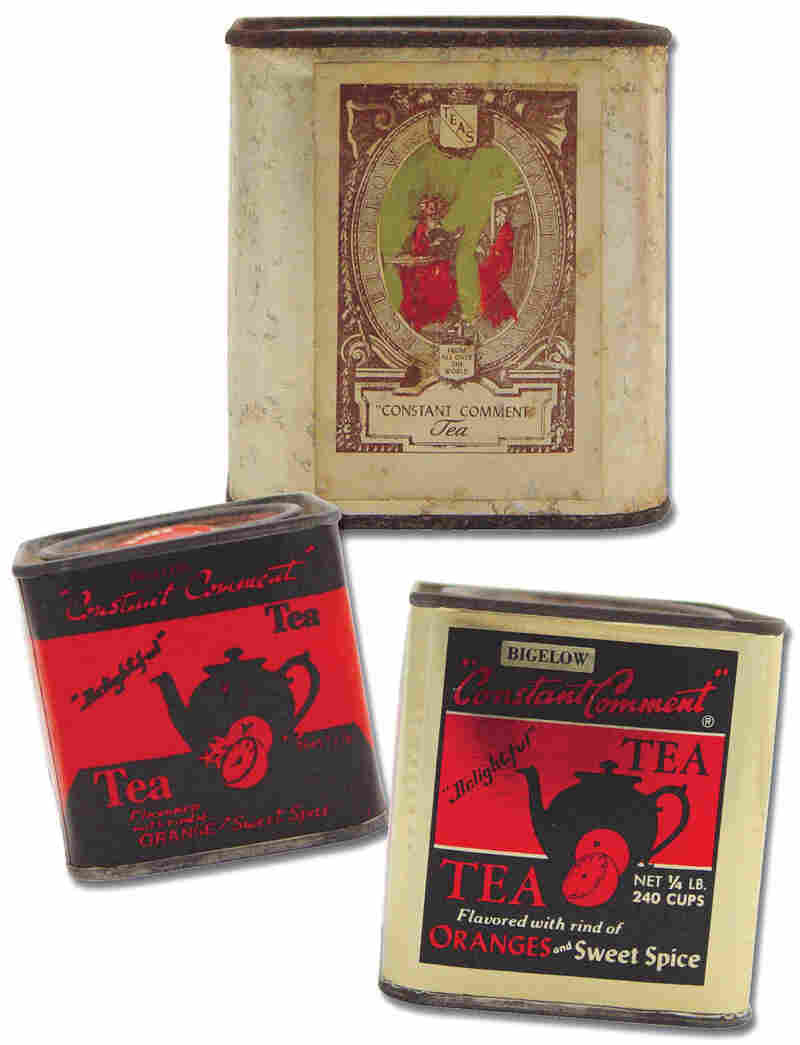 Constant Comment was first sold in tins wrapped in gold foil. The family could only afford single color labels for the first tea tins. So David Sr. and his son, David Jr., would hand-paint the red ladies on the labels. Courtesy of Bigelow Tea hide caption 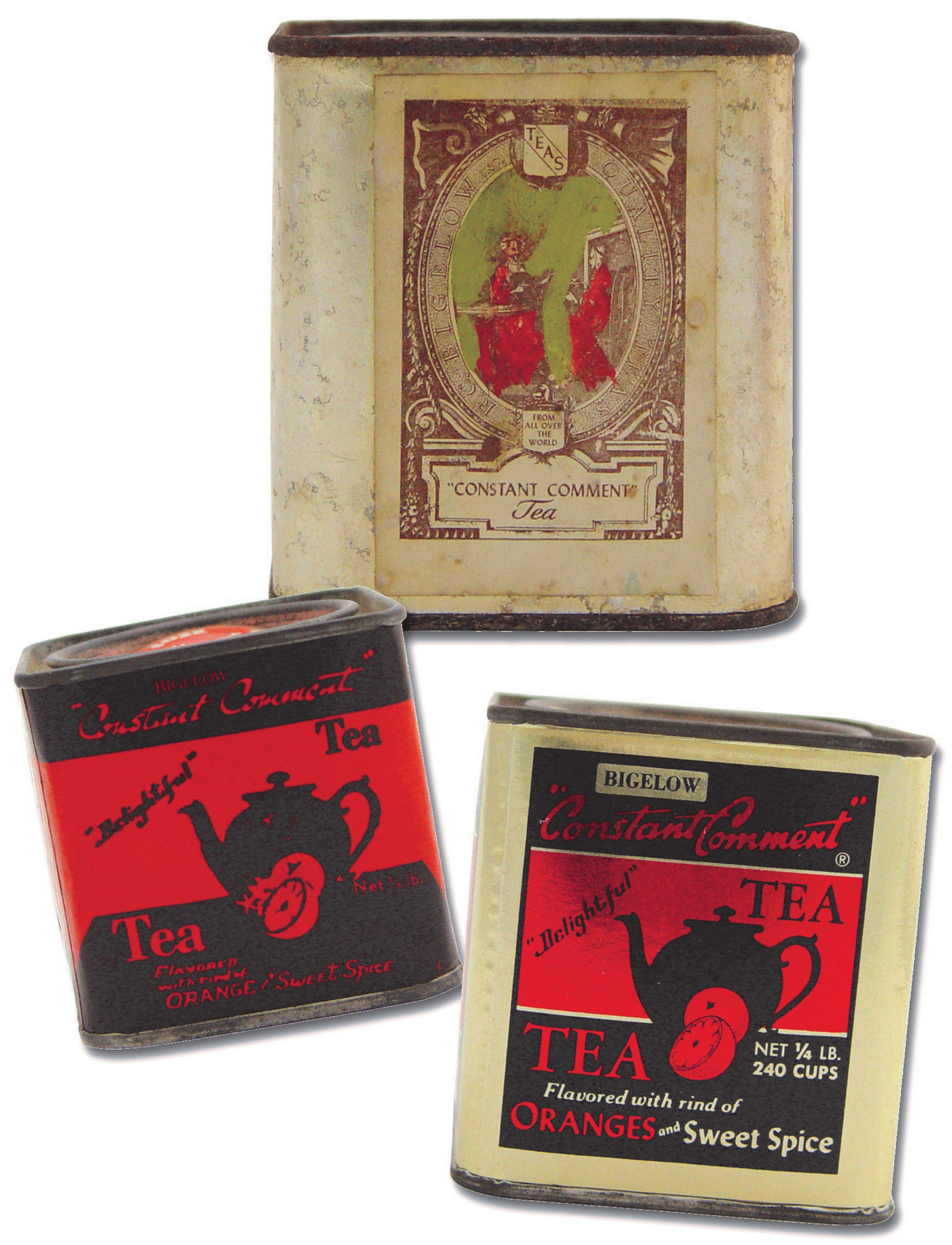 Constant Comment was first sold in tins wrapped in gold foil. The family could only afford single color labels for the first tea tins. So David Sr. and his son, David Jr., would hand-paint the red ladies on the labels.

One night, a dejected David Sr. said, "Son, don't tell your mother, but I don't think this company is ever going anywhere."

But then the Bigelows received an invaluable piece of feedback. One grocer reported that a customer had opened a tin, got a whiff of the heady orange fragrance, and was captivated. Realizing that the zestful aroma was the product's defining feature, the inventive Ruth supplied every shopkeeper with a "whiffing jar." Labeled "Open and Whiff," it was placed by the cash register in the way that perfume-testing bottles are available today at cosmetic counters.

Soon Constant Comment was being sold at Bergdorf's and Bloomingdales. But even then, says Cindi Bigelow, sales did not leap. "It was a very slow, gentle rise. The major jump took place in the 1970s," she says, "when we put our teabags in a folding box instead of a tin — now it became more presentable. And sales took off."

Bigelow is "very, very proud" of the Cohen connection. "When I first heard the song years and years ago, a friend pointed it out to me, and said, did you know he's talking about Constant Comment?" she says. "It was a real surprise, but we're thrilled to have that association."

So did the tea and oranges come all the way from China?

"No, they did not," laughs Bigelow. "The tea my grandmother used — and which we continue to use — is handpicked from the top of a mountain in Sri Lanka. We continue to buy from the same tea gardens even today."

And the oranges? "Not China, not even close," she says. "I can't tell you which country our oranges are from because that would be giving away too much, but it's from the same source that my grandmother used."

Interestingly, Suzanne Verdal remembers the "tea and oranges" a little differently. In 1998 she told BBC Radio, "We had tea together many times and mandarin oranges ... I would always light a candle and serve tea and it would be quiet for several minutes, then we would speak. And I would speak about life and poetry and we'd share ideas."

"I believe Cohen's version," says Bigelow. "Because he was registering everything."

But where Suzanne Verdal and the Bigelow Tea Co. are in perfect accord is in their common devotion to the environment. Suzanne was an early recycler. Cohen's song describes her wearing "rags and feathers from Salvation Army counters," an aesthetic shaped by her commitment to repurposing old clothes. Bigelow, which tags itself as a "Zero Waste to Landfill" company, is big on recycling.

"It's part of the DNA of the employees," says Bigelow. "Corrugated boxes are shredded for packaging, tea dust is used on farms for compost, all our cafeterias use compostable components. There are 900 solar panels on the roof of our Fairfield plant, which gives us 15 percent of the energy we use. We are proud of being a family-run, inclusive company that believes in kindness. All our teabags are made in America."

The Bigelow website has several complaints from Constant Comment connoisseurs about missing the old taste. So has the formula of their founding tea changed? The question appalls Bigelow.

"Absolutely not," she says. "People drink with their eyes — and because the design on the box has changed, they assume the taste has changed. It hasn't. Till today, the only two people who know the formula are my parents. They put on their lab coats, go into a room and do the mixing — six minutes of this and 12 minutes of that. What we can't help is the variability in the crop of oranges from year to year, but we would never ever change the original recipe. My father hasn't read those comments, and if he did, he would be so insulted and so hurt — his whole view of mankind would change. I'm not joking." 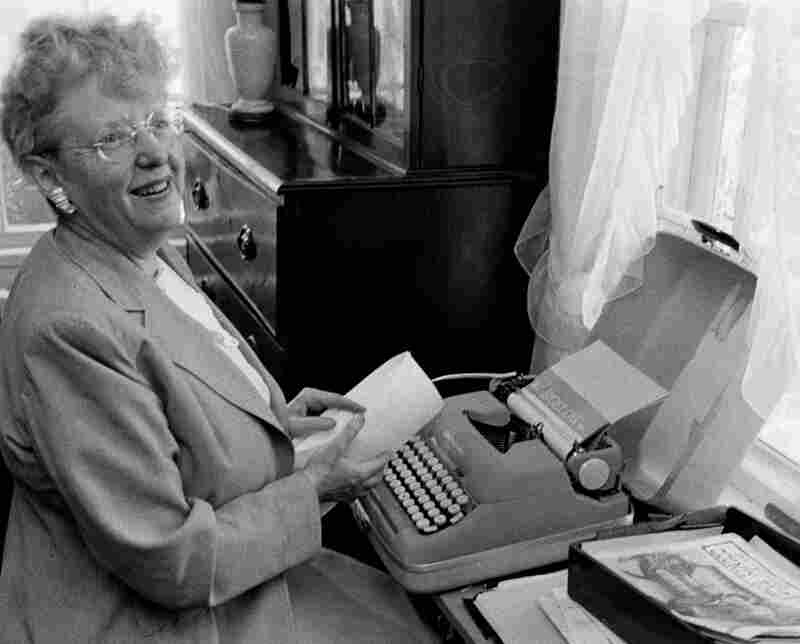 Ruth Bigelow died before seeing her company prosper or knowing that her tea would make its way into one of the most beautiful love songs of the age. She died in 1966, the same year that "Suzanne" was made famous by Judy Collins.

"My grandmother was a very generous woman, the sort who would give the shirt off her back," says Bigelow. "But more than anything, she was tenacious. For a woman to be running a business in the 1940s was not an easy thing at all, but she persevered. Because of her, we are where we are today."

That's why the family has resisted suggestions from canny advertising agencies to change the name of the tea. Constant Comment doesn't exactly trip off the tongue. "It's the name my grandmother gave," says Bigelow, "and we're not changing it."

A previous version of this story said that the old tea recipe that inspired Ruth Bigelow to create Constant Comment contained cinnamon. But Cindi Bigelow says the tea does not contain cinnamon.