Accessibility links
Decades Later, Salvador Dalí's Decadent Dream Dishes Are Awakened : The Salt Food and surrealism make bizarre bedfellows in Les Diners de Gala, first published in 1973. Now, you can get a reprint of those recipes and illustrations — and a peek into his legendary banquets. 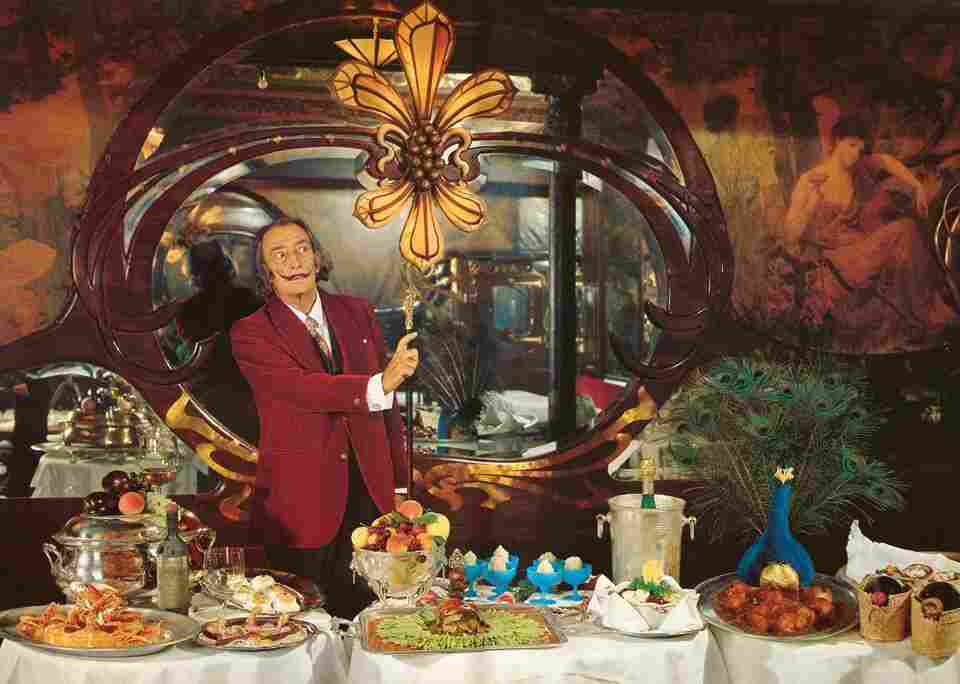 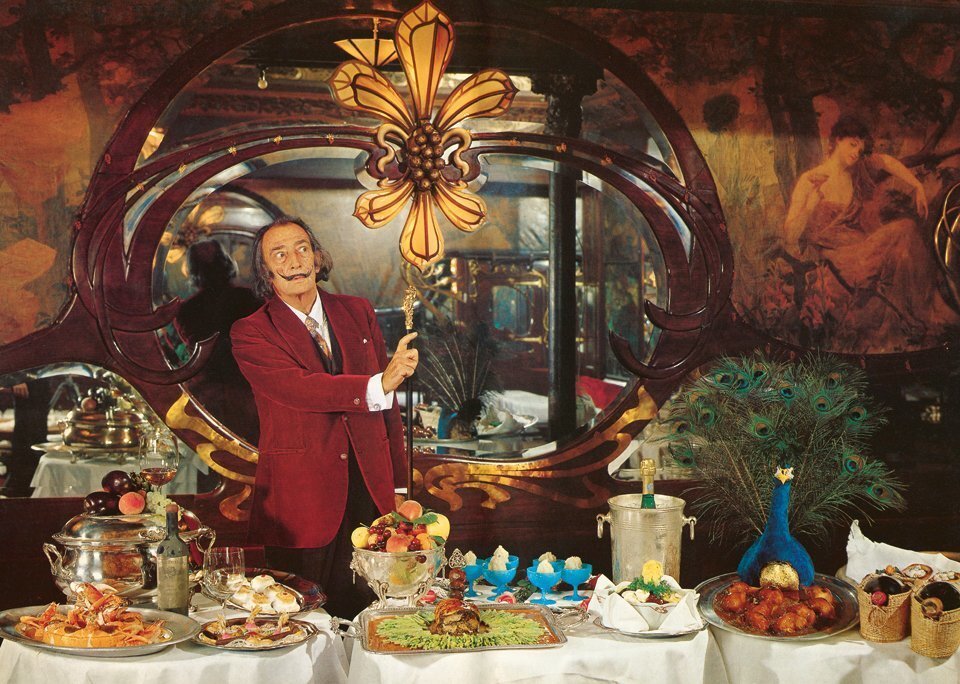 Salvador Dalí's dinner parties were legendary for their opulence and bizarre fare. In 1973, Dalí immortalized these freakish feasts in the book Les Diners de Gala.

The hostess is dressed as a unicorn, reclining on a red velvet bed. She's bottle-feeding a lion cub. Monkeys scurry around in the room, which was rented from the Hotel Del Monte in Monterey, Calif.

For dinner, guests are served dishes like a fish plated inside satin slippers or an engraved metal cloche lifted to reveal a tray of very jumpy frogs. While this may all sound like somebody's fever dream, this 1941 dinner was just one of many surrealist parties hosted by artist Salvador Dalí and his wife, Gala.

In 1973, Dalí immortalized these dinners in the book Les Diners de Gala. Only a few hundred costly copies of the original are left in existence, featuring 136 recipes as well as food photographs and original illustrations by Dalí. They're organized by course with a special section devoted to "aphrodisiacs," which hints at the fact that this is a decidedly PG-13 kind of cookbook. Now, for the first time in 43 years, art book publisher Taschen has reprinted Les Diners, bringing it to the kitchens of Pinterest-hungry hosts around the world.

It's not your average cookbook. It begins with the admonition that the recipes are "uniquely devoted to the pleasures of Taste." These are not meals you should rush to get on the dinner table or serve to someone who won't eat anything more adventurous than a hamburger. "If you are a disciple of one of those calorie-counters who turn the joys of eating into a form of punishment, close this book at once; it is too lively, too aggressive, and far too impertinent for you." Reader beware. 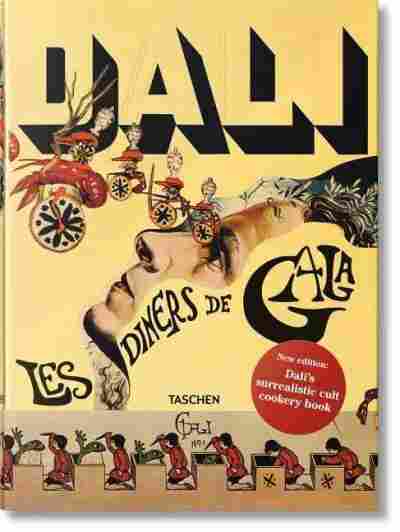 There's an entire chapter devoted to snail and frog dishes — with seven variations of snails alone. In a recipe for Steamed and Boiled Larks, Dalí instructs the cook to let the pot of artichoke hearts, marrow-bones and songbirds "boil joyfully." The preparation of Dalí's Avocado Toast would be unrecognizable to today's brunch-going crowd — it includes lamb brains, minced almonds and tequila all perched on top of rye bread. One recipe for a Bush of Crayfish doesn't even include a proper list of ingredients. Instead, Dalí notes, "After giving us this recipe the chef decided that he wanted to keep the exact ingredients a secret. We present the recipe anyway for its reading pleasure." Dalí wrote instructions for how to prepare the dish (including the names of many ingredients), but readers are left to figure out measurements for themselves.

Though it's Dalí's cookbook, not all of the recipes originated in the artist's kitchen. He thanks the chefs of famous Parisian establishments like Michelin-starred Lasserre and La Tour d'Argent, art-nouveau bistro Maxim's and historic railway restaurant Le Train Bleu — originally known as Buffet de la Gare de Lyon — for their "highly gastronomical recipes." But it's the presentation of the dish, not the recipe, that earns a place on the table of a surrealist dinner party. 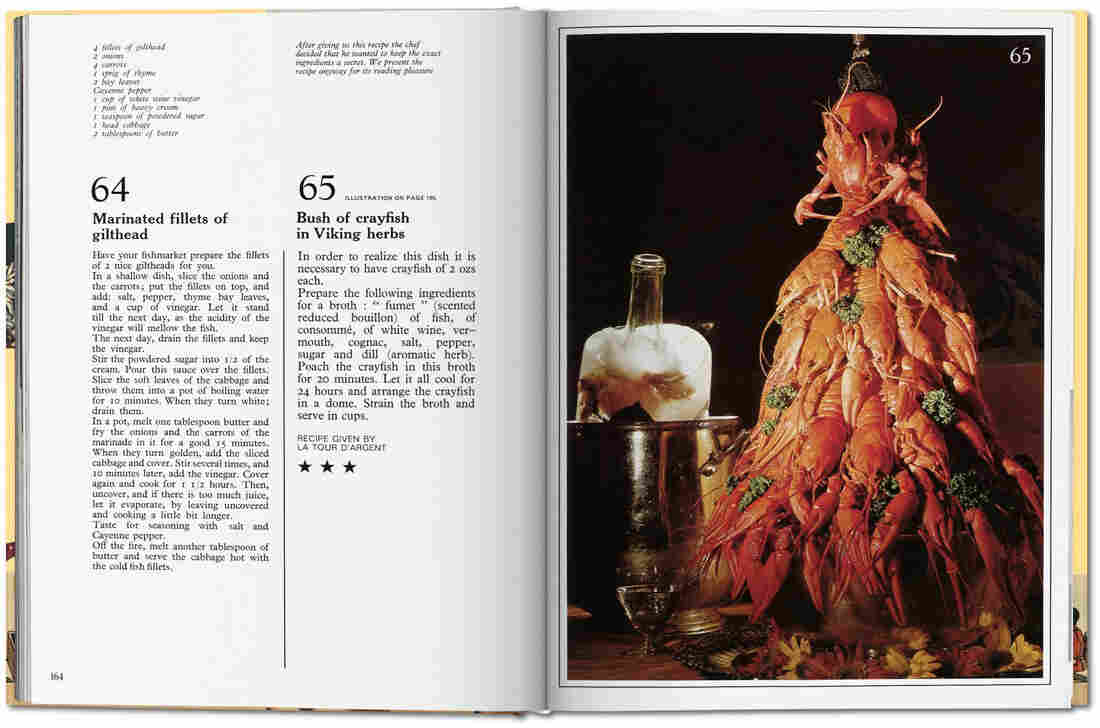 The "Bush of crayfish" recipe didn't include measurements but instead says, "After giving us this recipe the chef decided that he wanted to keep the exact ingredients a secret." Taschen hide caption 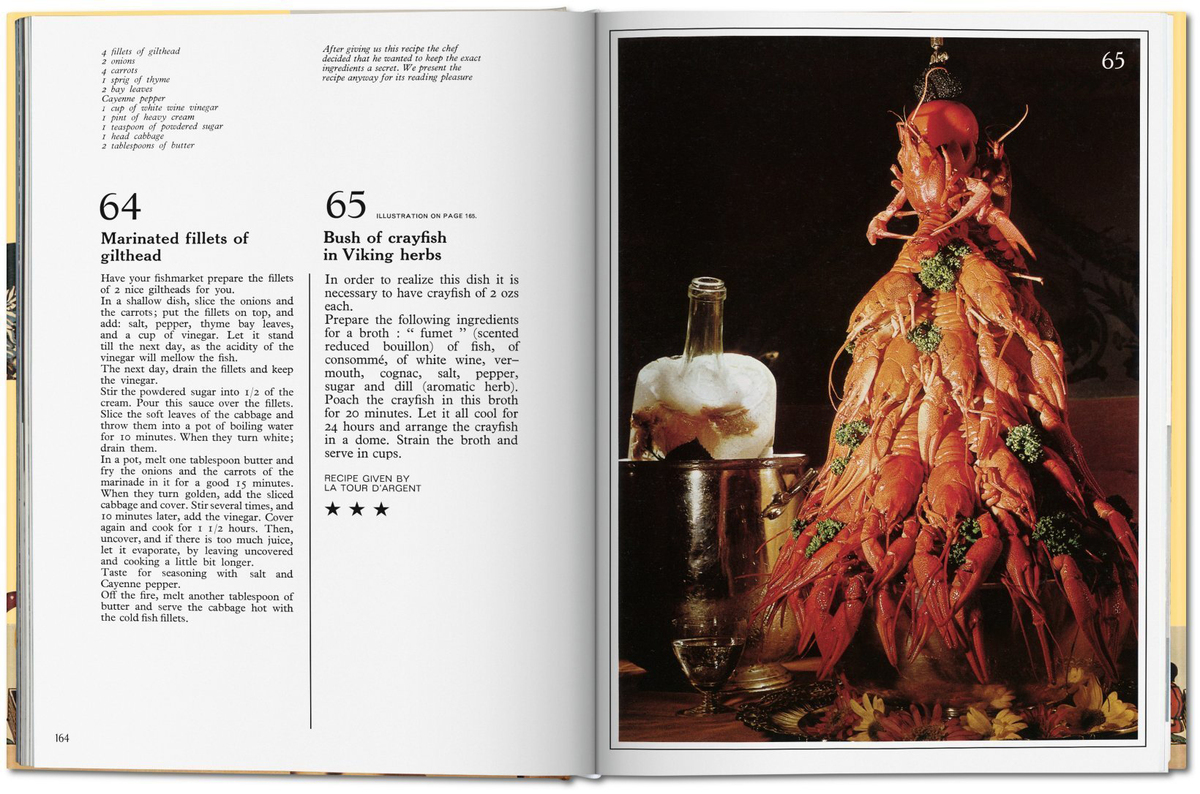 The "Bush of crayfish" recipe didn't include measurements but instead says, "After giving us this recipe the chef decided that he wanted to keep the exact ingredients a secret."

While it may seem wacky to serve people a tree of cooked crawfish, an Oasis Leek Pie made to look like a palm tree beckoning from the desert, or bacon-wrapped eel stuffed inside of a fish, perhaps 2016 is the perfect time to reprint a surrealist cookbook. These recipes are tame compared with Instagram-friendly food trends like rainbow bagels, bloody marys topped with either a hamburger or an entire fried chicken (or both!) and a pizza inside of a pizza box made out of pizza. If Dalí were alive today, perhaps instead of painting he'd be creating something like the surrealist Instagram account @tasteofstreep, where photos of Meryl Streep are printed onto different foods.

Today, chefs quickly gain fame — if not fortune — by watching their concoctions go viral as food trends. As Dalí once said, "At the age of 6 I wanted to be a cook. At 7 I wanted to be Napoleon. And my ambition has been growing steadily ever since." Perhaps from beyond the grave, becoming an Instagram celebrity is Dalí's newest goal.

In 1941, entertainer Bob Hope gets a taste of what it's like to sample a surreal spread hosted by eccentric Spanish artist Salvador Dalí and his wife, Gala, at the Hotel Del Monte in Monterey, Calif.