Accessibility links
Climate Change Is Making Greenland Warmer, But Farmers There Are Struggling More Than Ever : The Salt Warming and longer summers in Greenland have raised hopes for expansion of agriculture on the island. But the summers have been drier, causing a decline in the number of sheep farms on the island. 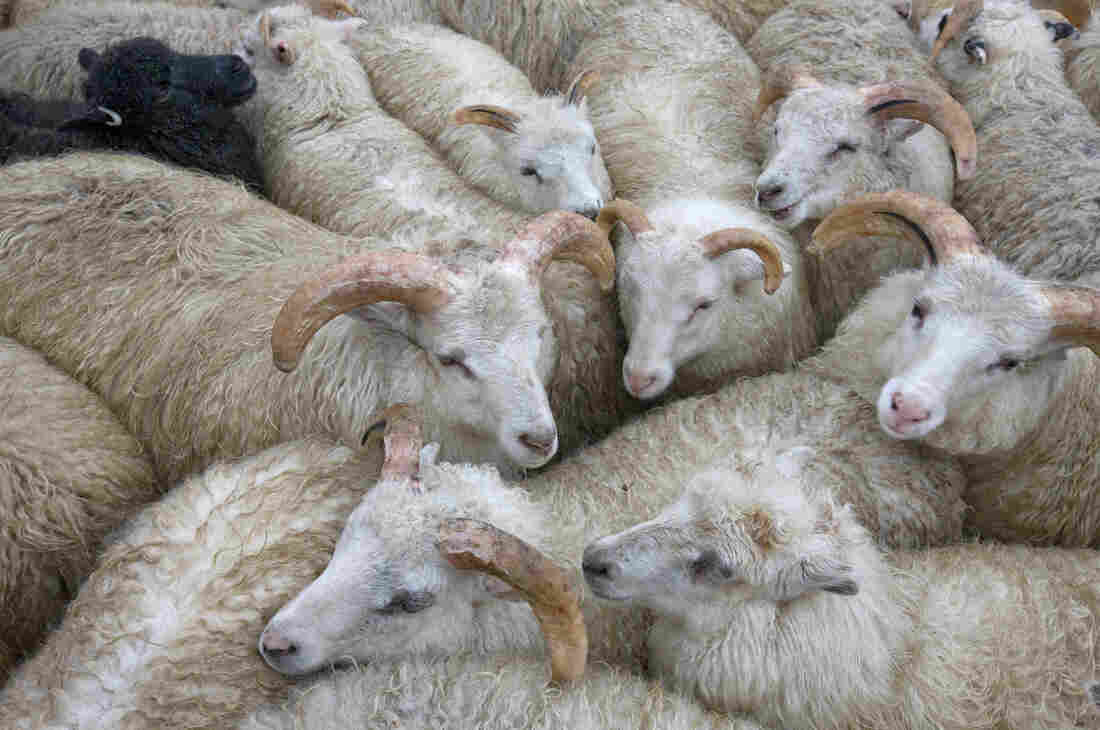 Climate change has made summers in Greenland warmer and drier, leading to a decline in the number of sheep farms on the island. Peter Essick/Aurora Creative/Getty Images hide caption 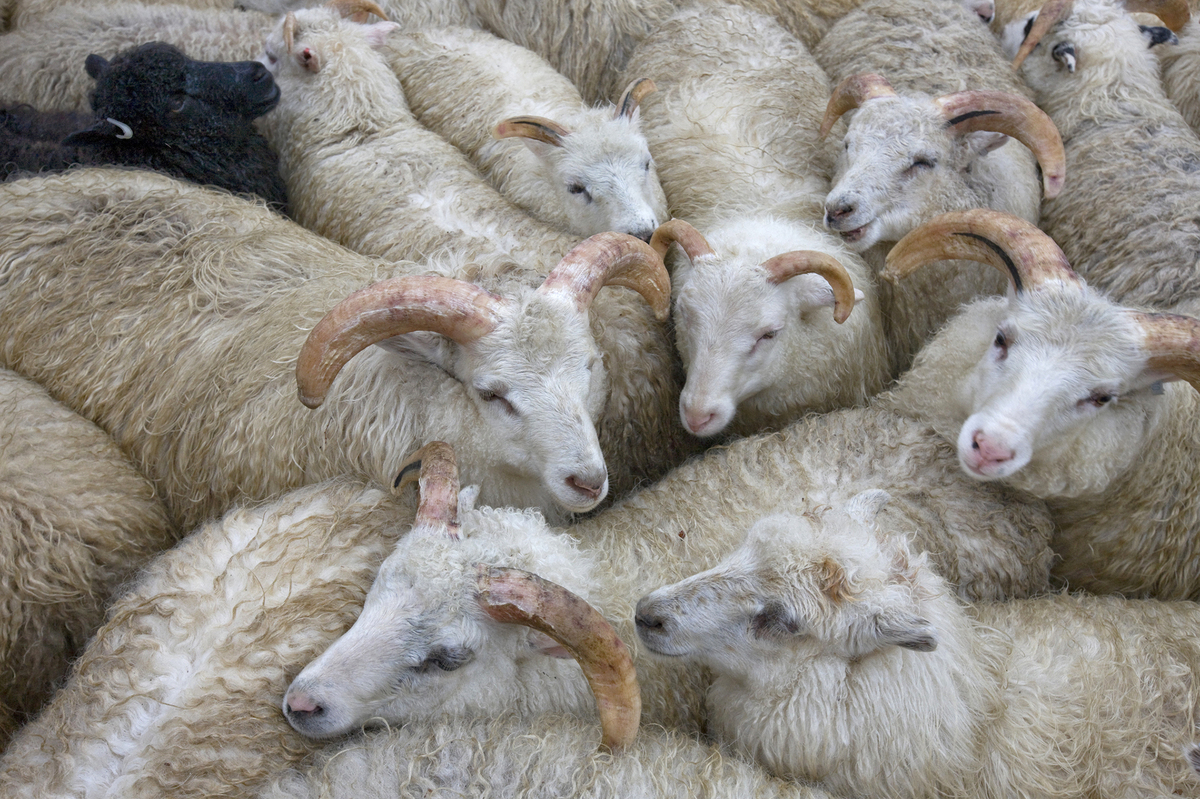 Climate change has made summers in Greenland warmer and drier, leading to a decline in the number of sheep farms on the island.

It's a cool August morning as I ride in Magnus Hansen's dented pickup truck through the verdant hills of south Greenland. We're in search of his flock of 500 sheep grazing on the slopes. Soon we encounter three animals grazing by the gravel on the dirt road. The two ewes and a lamb first eye us warily from the bushes, then scurry across the road. Nearby is a shimmering fjord, but less than 10 miles away, though we can't see it, lies Greenland's mighty ice cap, a mile thick in the center of the island.

Hansen's sheep farm, called Tasilikulooq, sits amid glassy lakes and sloping hills. When I first arrive here, his red tractor sits next to a dusty snowmobile, a reminder of the punishing cold he and his family brave each winter. But it's not the brutality of the coming winter that concerns Hansen right now. He's worried about the travails of the summer.

That's because it has been horribly dry here for months. Hansen fears that his flock of sheep might be malnourished if the pastures don't soon recover from a hot, dry summer so he can harvest the grass for winter hay feeding.

"The seasons here have been very difficult lately," says Hansen. The average animal in his flock in the summer of 2015 was 2 to 4 pounds lighter than normal. Hot summers over the past decade have cost him thousands of dollars in losses, he says.

Greenland is an Arctic nation, but along the fringe of the island, between the ice and sea, lies land. And in the south portion of the country, this land is arable. The fields and shrubbery of Tasilikulooq are among the verdant rolling hills that inspired the Vikings to call this place Greenland. They arrived around 985 A.D. and began raising livestock, beginning a tradition that a few dozen Inuit sheep farms continue in this region today, providing meat, primarily, for a tiny portion of the population.

Since Greenland's 60,000 citizens rely almost entirely on food imports from Denmark and other European countries, farmers and officials have hoped that steadily rising temperatures, and shorter winters, would spur a growth in agriculture here. (Summer temperatures have risen about 2 degrees Fahrenheit in southern Greenland since 1975, increasing the growing season by two weeks.) And media stories about Arctic gardening in greenhouses or the warming temperatures have hyped the possibilities.

Instead, says Aqalooraq Frederiksen, a third-generation farmer who works at a regional farmer assistance bureau, the dry summers are diminishing the prospects for Greenlandic farming.

Recent summers have been both warm and dry, causing drought in south Greenland, says John Cappelen, a climatologist at Danish Meteorological Institute, which maintains climate data for the island.

"In 2015, for example, we didn't have spring," said Greenlandic agricultural consultant Henrik Motzfeldt Egede. "It just went from a very cold winter to a hot, dry summer." He says growth in pastures for livestock was "very bad as a result." Meanwhile, the number of sheep farmers in Greenland has fallen from 74 in 1983 to about 37 farms today, says Frederiksen.

To compensate, farmers try to irrigate their pastures and hayfields, and they purchase animal feed to supplement the hay in the winter time. On an August morning by a dock near Tasilikulooq I watched a loader moving giant plastic bags of fertilizer and sheep fodder, 1,850 tons in all, from a small ship onto shore. Such shipments are a lifeline for sheep farmer Miki Egede, whose nearby farm, one of the largest on the island, boasts 600 sheep and 31 cattle.

"Our incomes just haven't been able to keep up with the overall increase of our expenses," says the farmer, who is no relation to the consultant. "Expenses in the form of fertilizers, fodder for the animals, and everyday items. Looks like it is the sheep farmers with the fewest sheep that were hit the hardest."

Government subsidies, meant to support Greenland's farms, now stand at $1.8 million per year. There are persistent rumors that the government could cut those subsidies, however, to save costs given that the sector is shrinking and provides relatively little food to Greenlandic citizens.

"This year we also had drought throughout most of the early summer, but limited rainfall late in the summer made the harvest better than last year," says Egede. But severe drought has struck Greenland in two of the past five years and recently published research suggests the trend may continue because of large scale changes in Arctic weather systems. 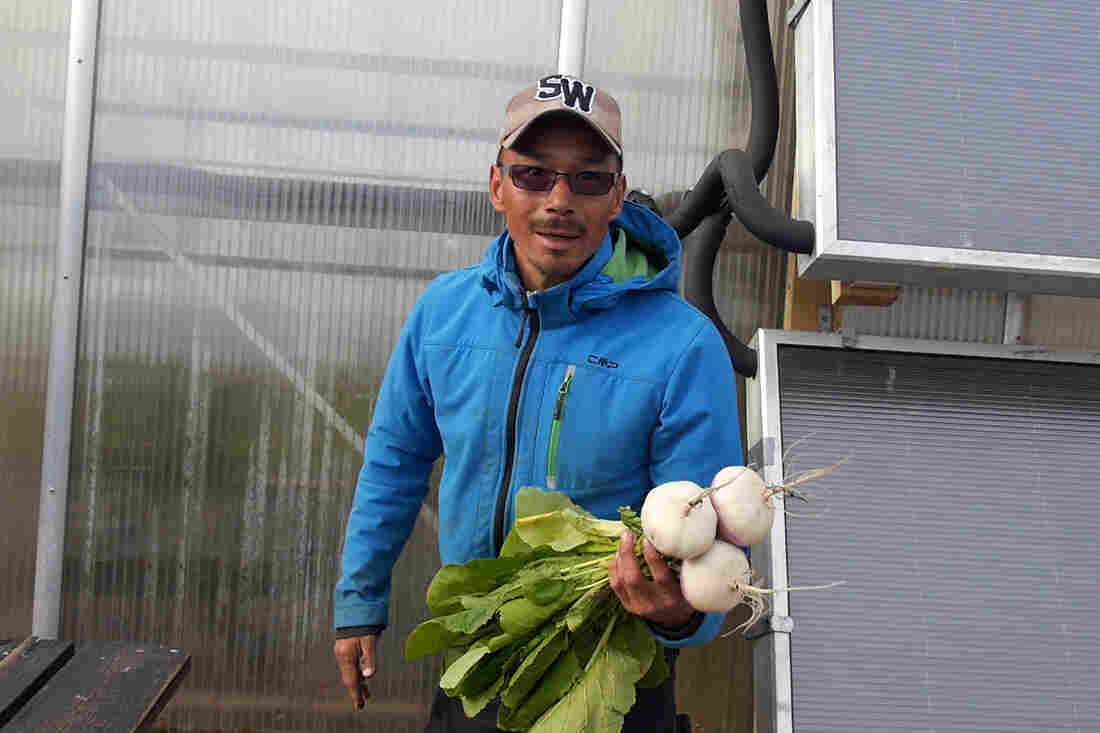 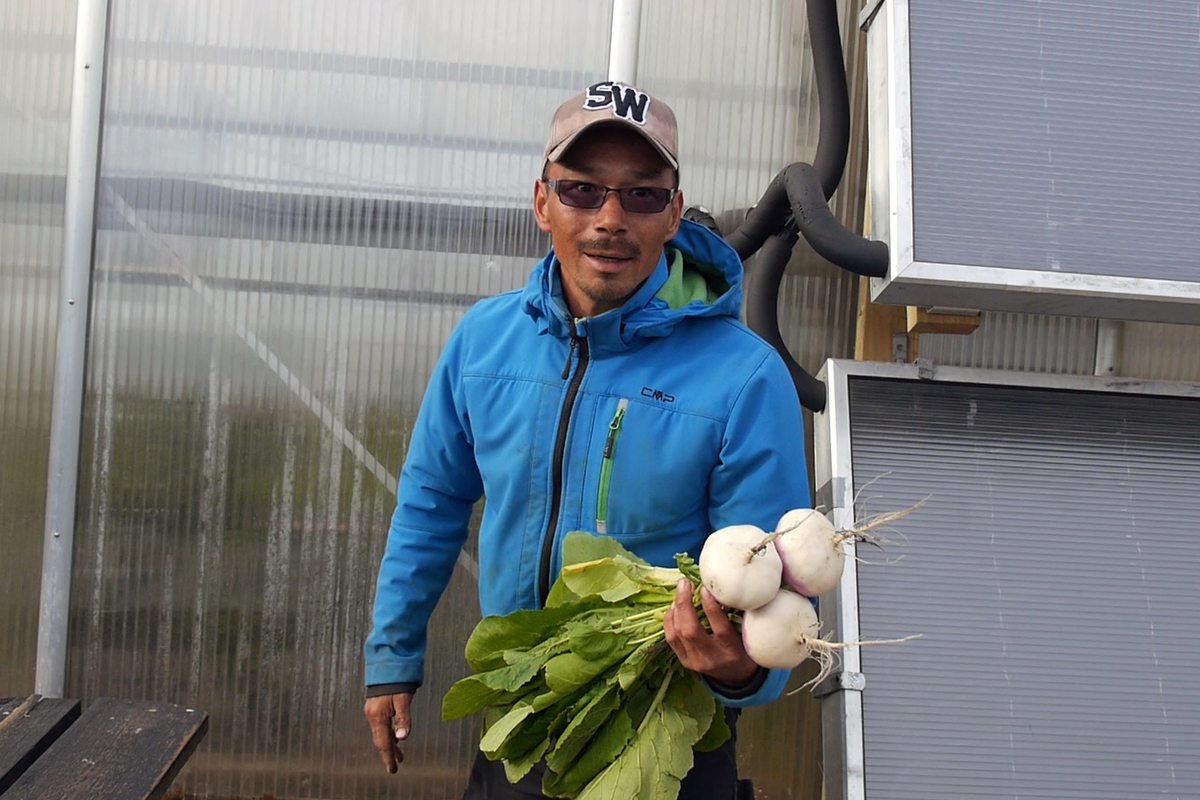 Efa Poulsen grows turnips, potatoes and other vegetables on the Upernaviarsuk farm in southern Greenland.

A trip to the government's testing farm near the southern tip of the island underscores some of the challenges farmers face here. Efa Poulsen, the gardener, tests different varieties of carrots, turnips, potatoes and feed crops like barley. Inside two greenhouses he is growing other vegetables, including tomatoes and cucumbers.

Poulsen removes plastic sheeting from a set of turnip plants and pulls up a turnip and cuts off its greens. After wiping off the dirt with a towel, he cuts me a slice; it's crisp and sweet in my mouth. The farm grows tasty vegetables and trains a few sheep farmers a year, says Frederiksen. But the farm can't produce enough food to cover the costs of the operation.

A handful of farmers have tried to grow vegetables for human consumption in gardens or fields, but almost all have found it unprofitable since yields are low and there's limited availability of farm labor. So the few dozen experiments with growing vegetables here, including a few greenhouses, only serve to feed the families that maintain the gardens.

But there may be one solution to the woes facing Greenland's farms — bees, says Ole Guldager, a commercial beekeeper who has been maintaining beehives in Narsarsuaq, a small airport town near the southern tip of the island. The part-time beekeeper produces between 550 and 650 pounds of honey annually for sale in groceries and tourist shops.

The hives thrive during hot summers when southern Greenland's plentiful wildflowers are in bloom. Guldager is convinced that beekeeping would allow farmers to "make a living without being subsidized." But beekeeping hasn't caught on. He is the only commercial beekeeper on the island.

As for the rest of Greenland's sheep farmers, with the number of farms declining, many of them have moved on to fishing, hunting, mining and other professions in search of a better source of livelihood.

Eli Kintisch is a freelance journalist in Washington, D.C. Reporting for this story was supported by the Pulitzer Center on Crisis Reporting.