Accessibility links
Fufu Diplomacy: How Food Is Helping Chinese See African Immigrants As More Than Foreign : The Salt Guangzhou is home to many African and Mideastern immigrants. In their small way, restaurants catering to these newcomers have helped Chinese diners start to see them as more than just the "other."

'Fufu' Diplomacy: How Food Is Helping Chinese See Immigrants As More Than Foreign

'Fufu' Diplomacy: How Food Is Helping Chinese See Immigrants As More Than Foreign 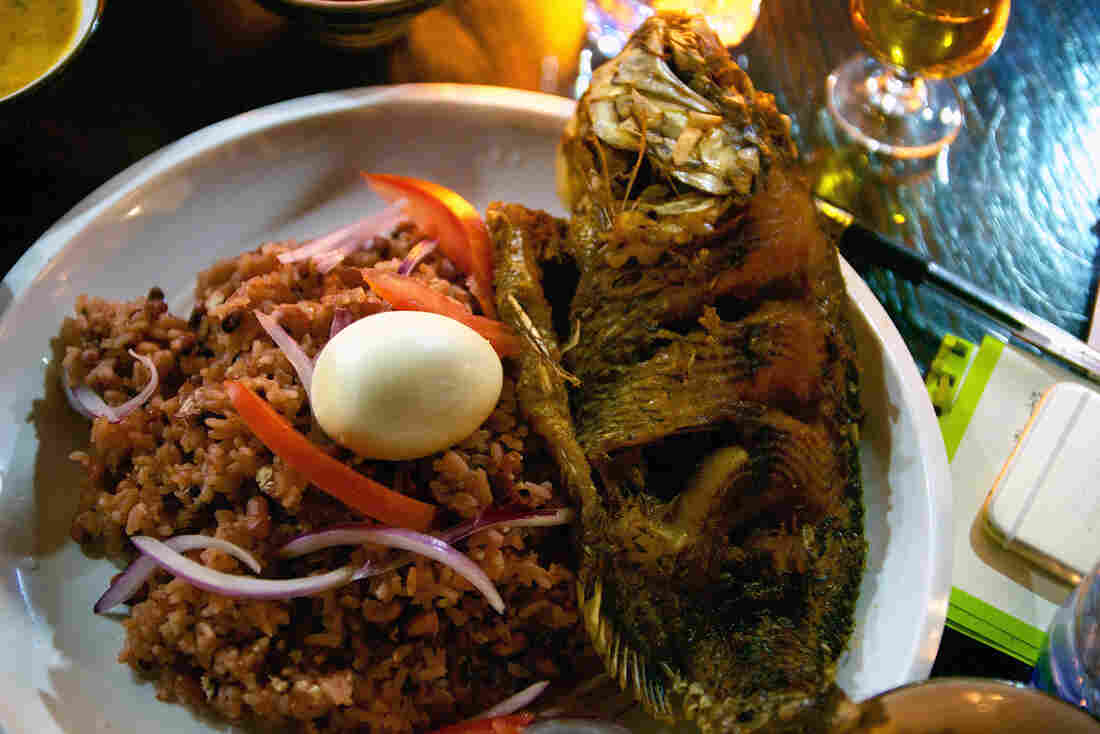 Fried tilapia with jollof rice, a West African specialty served at African Pot. The 3-year-old restaurant in Guangzhou, China, caters to the city's many African immigrants. Lately, it's seen a surge in Chinese customers, too. Kait Bolongaro hide caption 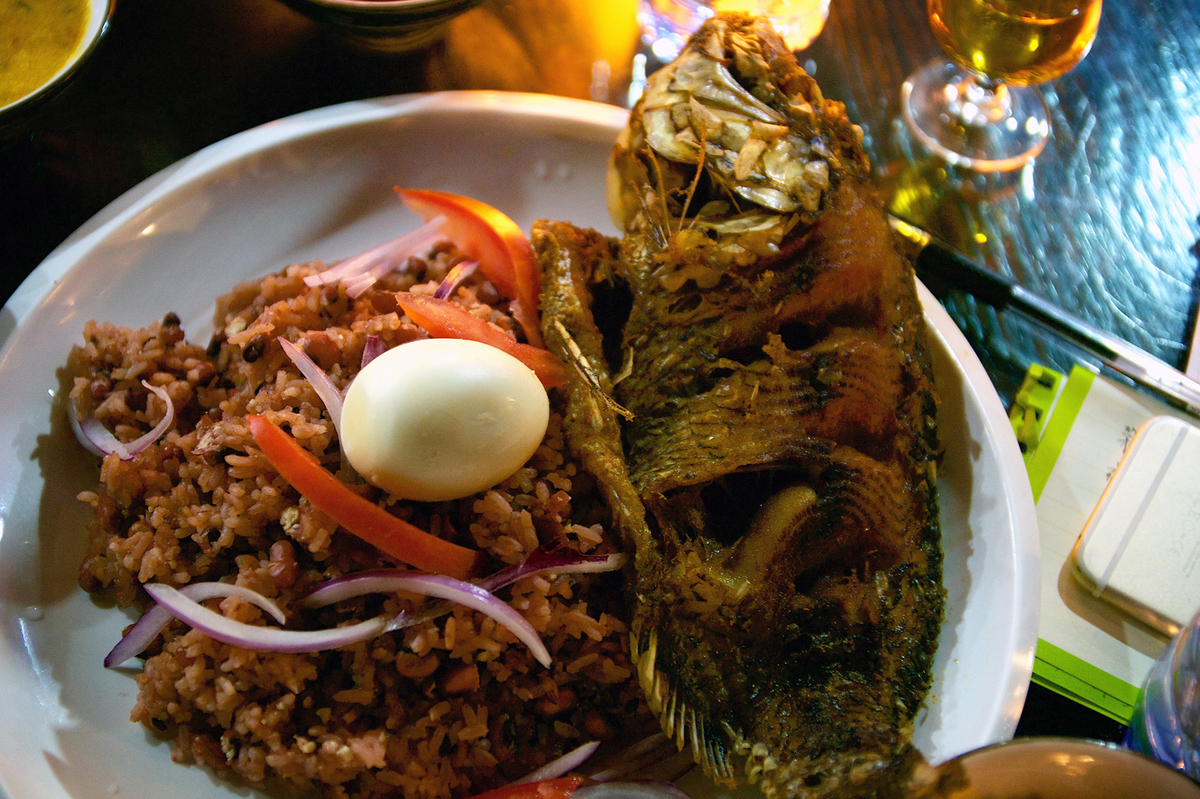 Fried tilapia with jollof rice, a West African specialty served at African Pot. The 3-year-old restaurant in Guangzhou, China, caters to the city's many African immigrants. Lately, it's seen a surge in Chinese customers, too.

Six months ago, Jessica Luo and her husband, Frank Millen, got the kind of newspaper review no restaurateur wants to see.

Their pan-African restaurant, African Pot, caters to a large expatriate community in Guangzhou, China's largest trading center. But in late spring, two Chinese journalists wrote a scathing piece on the place — criticizing African customers for eating with their hands, a tradition across the continent.

"Their racist coverage backfired – it actually made locals more curious about trying African food," says Millen, who was born in Ghana.

These days, he and his Chinese wife are welcoming more Chinese customers than ever. People like Youqin Chang, who was eating his first meal in an African restaurant on the day we visited. After reading an article about how dishes like fufu, a West African cassava and plantain porridge, are eaten with your fingers, the 28-year-old decided to give it a try. 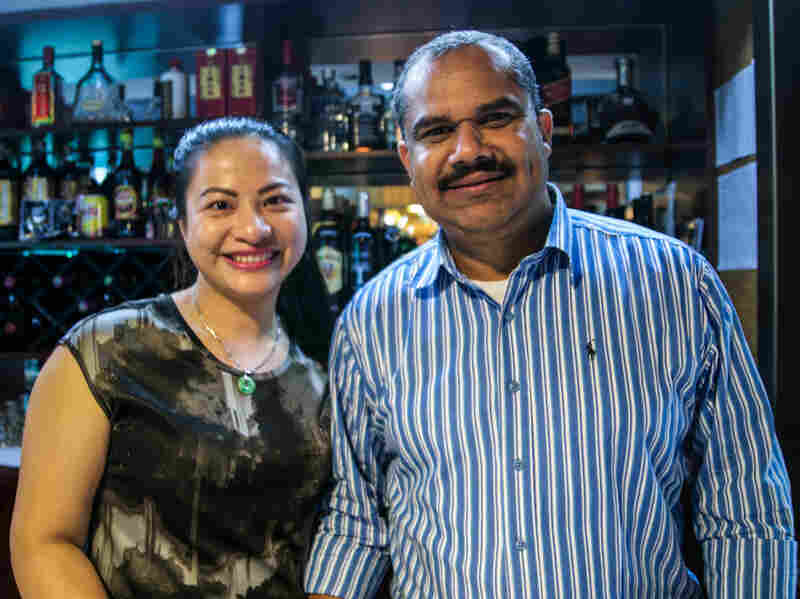 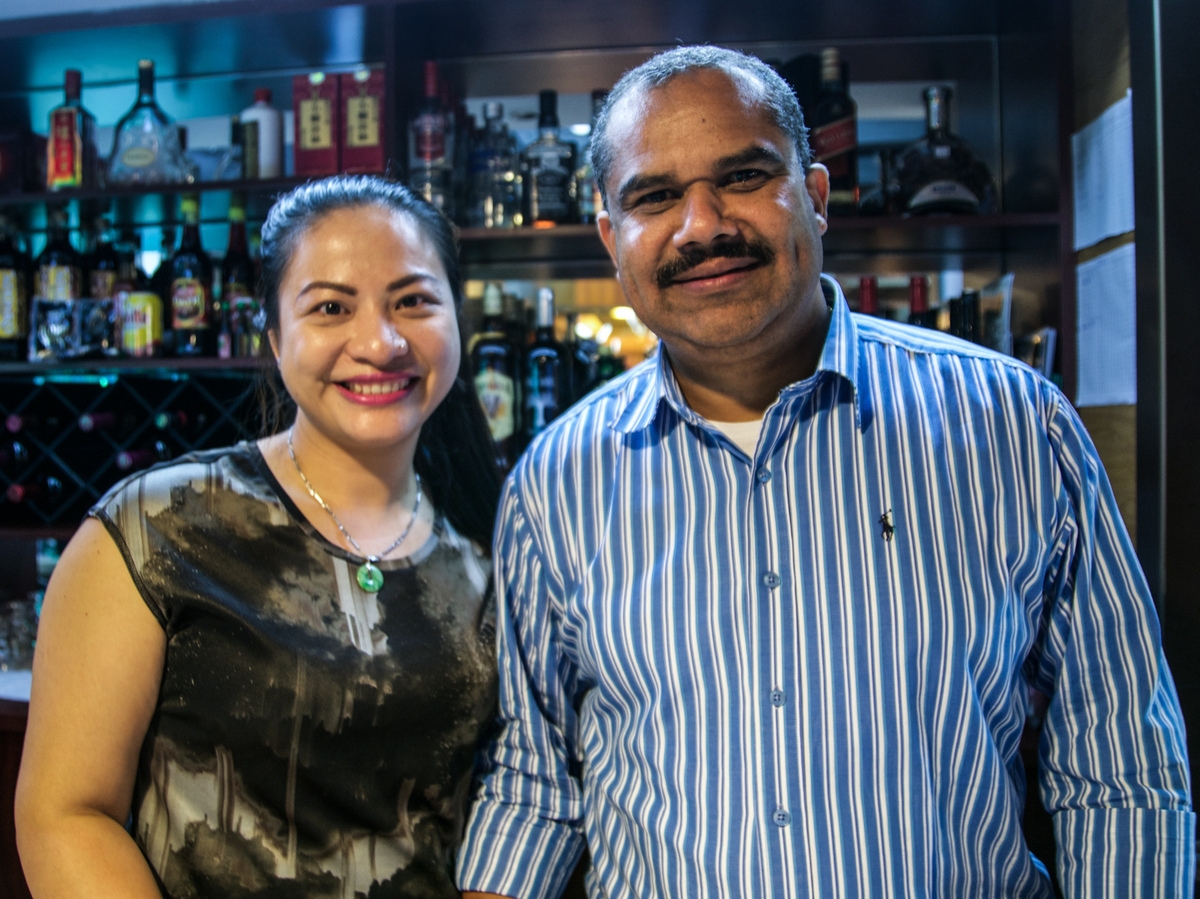 Jessica Luo and her husband, Frank Millen. The Chinese-Ghanaian couple own the African Pot restaurant in Guangzhou, China.

"The dining experience was good and very new for me. I wish I could visit Africa one day, when I save enough money," she explains.

These sentiments are a welcome respite from the kind of suspicion often faced by the 50,000 to 100,000 African immigrants who live in Guangzhou – earning it the nickname "Chocolate City." Many of them are business people who export Chinese-made goods to their home countries or offer translation services.

Millen and Luo opened African Pot three years ago. "Africans can have a tough time when they come to China, so we try to welcome them with their home food," explains Luo.

For customers like Abimbola Ayemi from Nigeria, the restaurant is a comforting refuge in a foreign land. She appreciates Sunday's all-you-can-eat buffet, which costs $10 and includes a drink.

"I am so happy to have tastes from Africa in China," she says.

A similar desire to provide familiar food in a foreign land prompted Syrian Khaled Birouti, 53, to open his Middle Eastern restaurant, Shami House, in 2002, after he noticed his compatriots sneaking food across the border for their extended business trips to China.

Guangzhou is home to an estimated 30,000 Arabs, drawn there by the export trade. While many of Shami House's customers are Middle Eastern, about 20 percent are Chinese — a number that's been steadily rising, according to his son and restaurant manager, Anas Birouti. 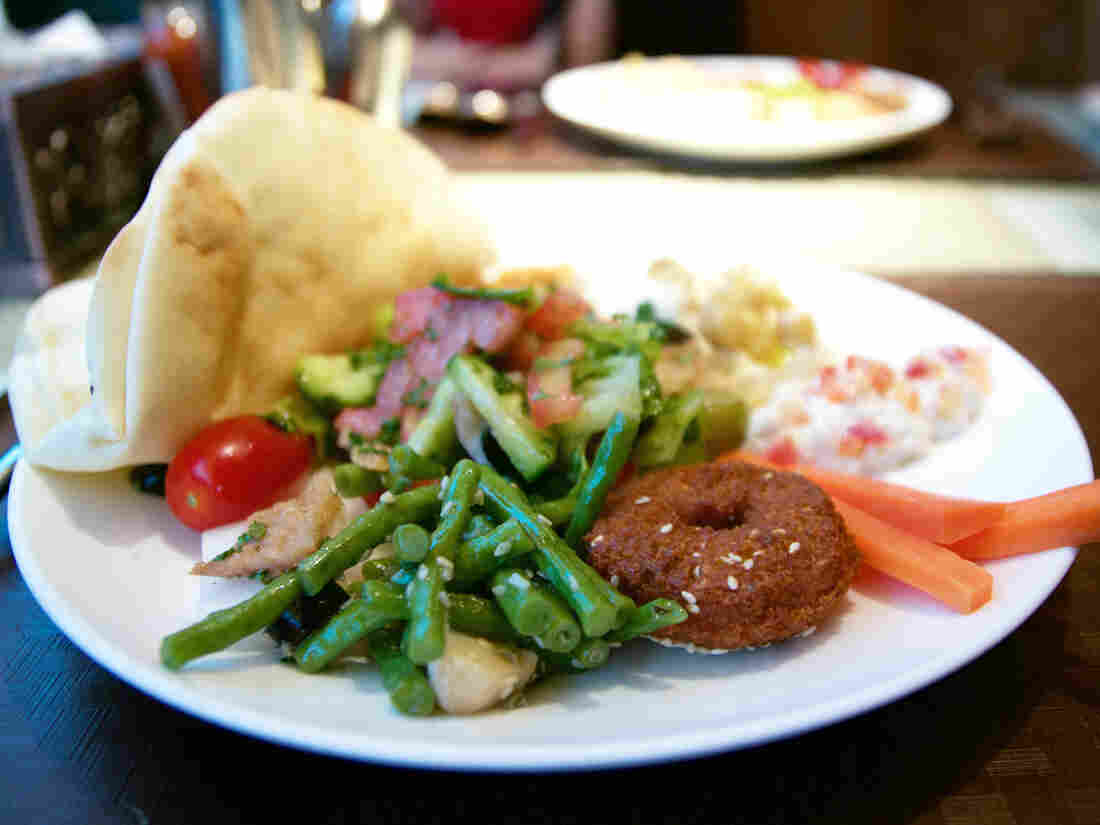 Shami House offers a taste of home to the many Middle Eastern immigrants in Guangzhou, China. Kait Bolongaro hide caption 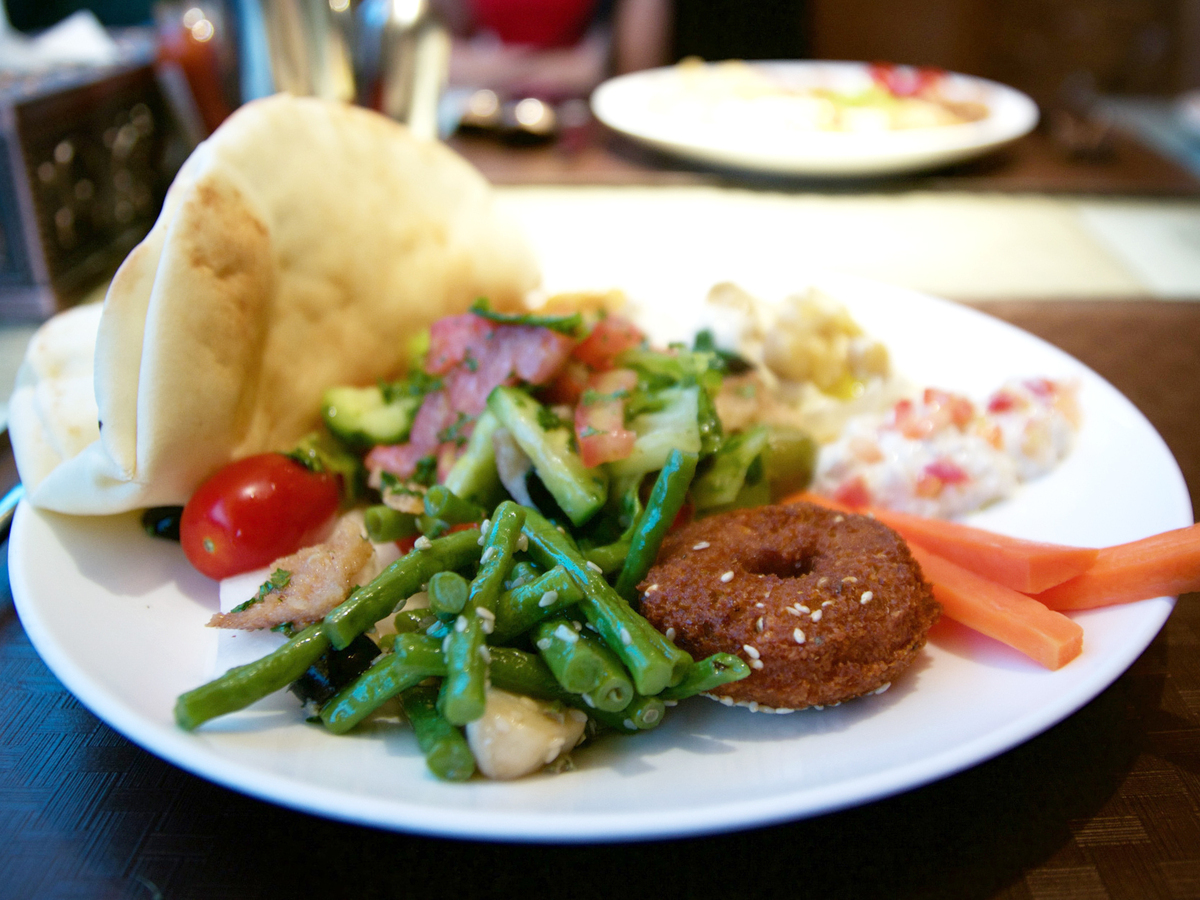 Shami House offers a taste of home to the many Middle Eastern immigrants in Guangzhou, China.

"Many Chinese people don't know what Middle Eastern food is," says Anas Birouti. "So when they come here with their business partners, they open the door to try new things."

Fanny Li, who works for a Saudi-owned company, first dined at Shami House with her Arab boss.

"I didn't know what to expect when I walked in the door, but now I love the food and the atmosphere," she says. "I like to bring my Chinese friends to this restaurant so that they can explore the food culture."

Jen Lin-Liu, an author who has written two books on Chinese food, says food is very important to Chinese people. "Traditionally, Chinese have been very close-minded about their food, but the younger generation is definitely more open- minded." 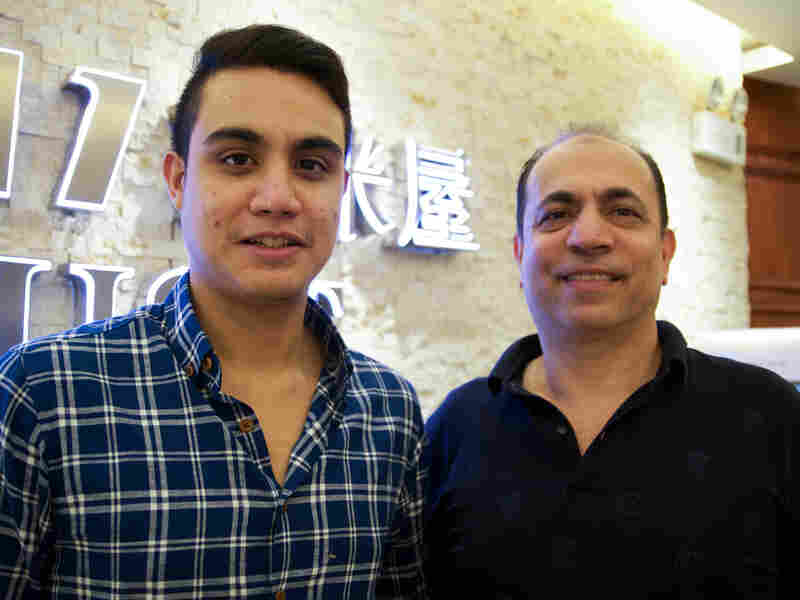 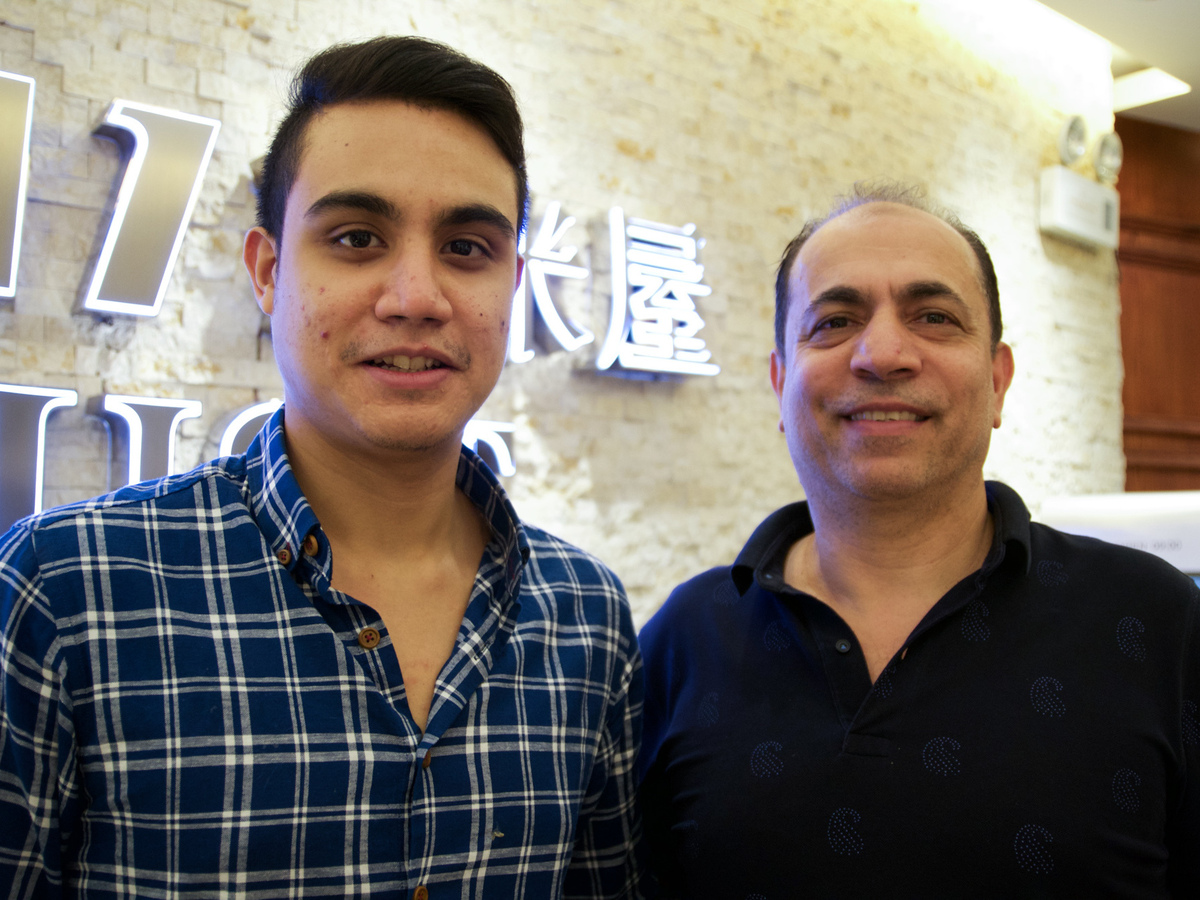 "I think it's a generational shift," she says.

He admits that it is sometimes difficult to be Muslim in China.

Arab refugees in China face racist comments and are often termed "lazy" or agents of the Islamic State. China's internal issues have also fueled widespread anti-Muslim sentiment. The country is home to 23.3 million Uighurs who have ambitions for independence but face restrictions on practicing their Muslim faith in their home province.

Despite the tensions, customer Li insists that Chinese and Middle Eastern cultures are similar.

"Family and large gatherings play a very important role [in both cultures]," she says.

Africans in China also face widespread discrimination – as evidenced by a racist commercial for a Chinese laundry detergent that sparked international outrage earlier this year. It featured a Chinese woman who puts an African man into a washing machine to "clean" him into a Chinese man. More seriously, Chinese netizens have founded hate groups in an attempt to prevent African immigration to Guangzhou.

Professor Adams Bodomo from the University of Vienna, an expert on the African diaspora in China, cheers the growing number of Chinese patronizing African restaurants in Guangzhou.

"African restaurant owners are like cultural ambassadors and cross-cultural bridge builders between Chinese and Africans."

Luo and Millen have made accommodations to cater to their new Chinese customers. Noticing that Chinese diners were overwhelmed by choice and portion sizes, Luo invented the 'Jungle Feast' — a loaded name for some, but approved by Millen. The mini-buffet offers small portions of different African specialties to suit Chinese ordering habits.

"Chinese people like to try many dishes at restaurants, so we decided to make African food a bit more Chinese," Luo says.

Luo admits she can also see the stereotypes against Africans at the African Pot. New servers sometimes quit after only an hour because they feel uncomfortable around Africans. But she insists her core staff has become fond of their customers.

The African Pot also faces more police scrutiny than its neighbors, says Millen. He says one African customer who forgot his passport was handcuffed after he had begun eating during a raid.

"It was embarrassing. The police came here because it's an African restaurant," he explains.

Despite the challenges, Luo is optimistic that restaurants like hers are fostering a cross-cultural dialogue.

"The Chinese and Africans are really learning from each other here," she explains. Restaurant owners like Luo and Birouti hope to see everyone co-exist, building more peace with every plate of fufu and couscous served.