Accessibility links
Thanksgiving Dilemma: When The Kids Go Vegan, It Can Be A Recipe For A Stressful Holiday Meal : The Salt For parents with kids on special diets, be it vegan, paleo or gluten-free, holidays can mean more anxiety than fun. The solution lies in working together with their children to plan the perfect meal.

When The Kids Go Vegan, It Can Be A Recipe For A Stressful Holiday Meal

When The Kids Go Vegan, It Can Be A Recipe For A Stressful Holiday Meal 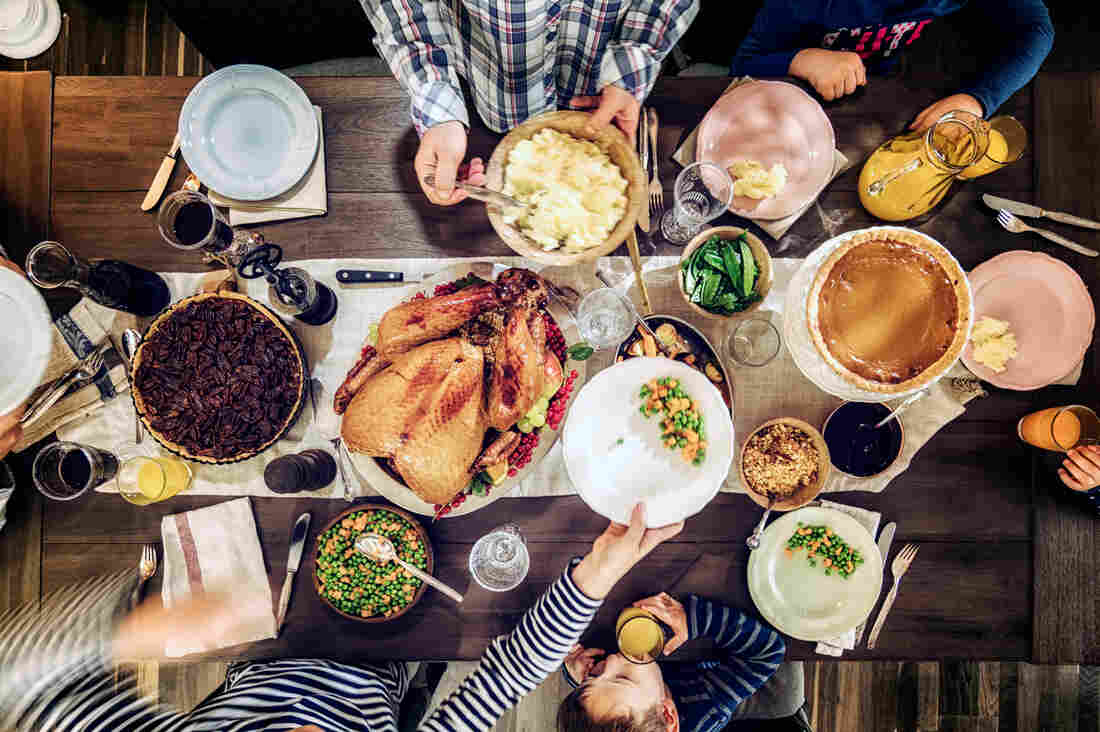 Cooking up a traditional Thanksgiving meal, with stuffed turkey, mashed potatoes, cranberry sauce, vegetables and pumpkin pie is stressful enough. But when a child is vegan or vegetarian, it can ramp up the anxiety. GMVozd/Getty Images hide caption 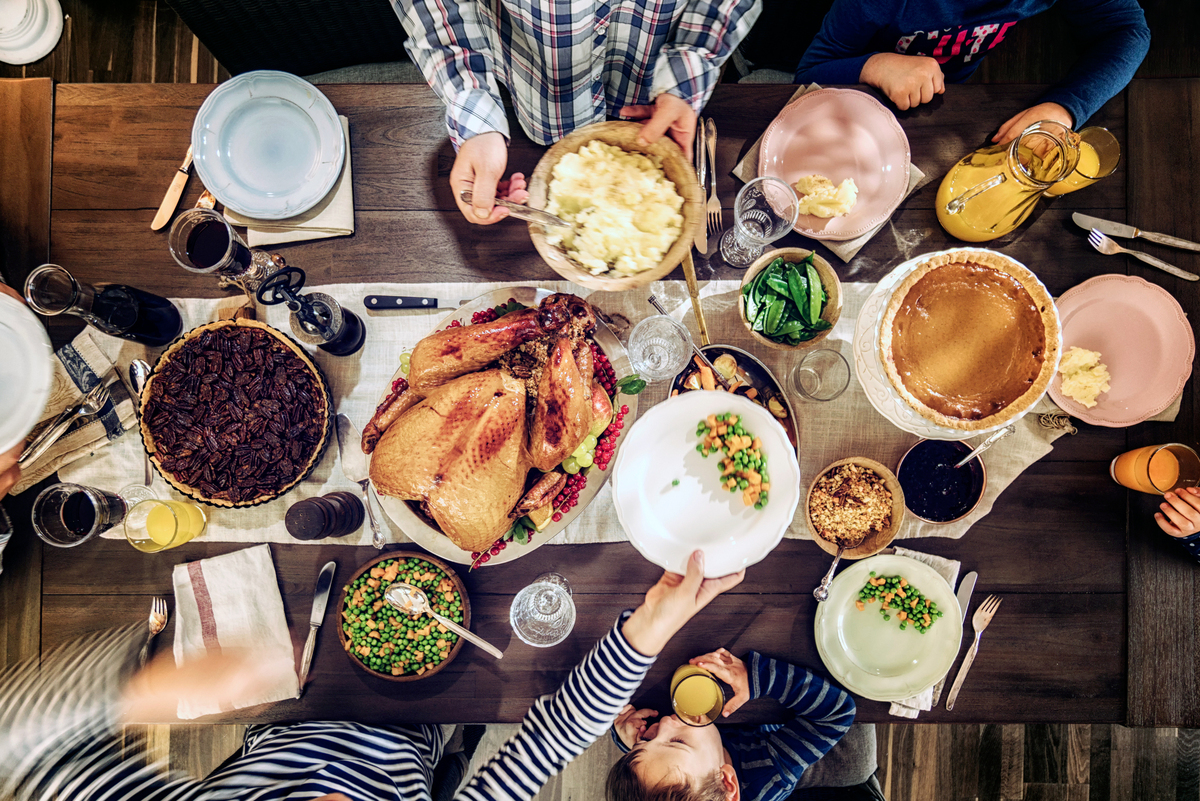 Cooking up a traditional Thanksgiving meal, with stuffed turkey, mashed potatoes, cranberry sauce, vegetables and pumpkin pie is stressful enough. But when a child is vegan or vegetarian, it can ramp up the anxiety.

Every holiday season, things get a "bit tricky," says Risa Greene, 53, from New York City. "You have one child who is a human garbage disposal and will eat anything you put in front of him, and you have another child who is more restricted than [the] TSA."

Greene's son is an omnivore — he eats everything. Her daughter, Jessica, is a vegan. She stopped eating meat when she was in high school years ago, then dropped dairy products and eggs in college and eventually gave up gluten, too.

That makes for pretty slim pickings at the Thanksgiving dinner table. "The holidays have become less of a time of fun and enjoyment, and more of a time where I learn what 'tempeh' is. What that texture is, is still unclear," Greene wrote to The Salt. Jessica's "anxiety [over] being able to eat at holidays has given me anxiety."

She's joking, but only half joking. The anxiety is real.

'No Place For Discontent': A History Of The Family Dinner In America

There have been years when Jessica did not eat on Thanksgiving at all, Greene says, because everything had some forbidden ingredient or another. For a lot of families with members on unconventional diets, mealtimes on special occasions can become a strain.

That's particularly true when that member of the family is a teenager. According to a new poll conducted by a group at the University of Michigan Mott Children's Hospital, over half of parents with teenagers on a special diet – be it vegan, vegetarian, paleo or gluten-free – said that the switch had become a source of conflict or stress.

Often, as in Greene's case, parents worry about their child's nutrition and health. Or trouble may arise because a new diet represents a daily change that can affect an entire family, particularly for the parent who cooks, because they have to make extra, specially prepared food, says Sarah Clark, a health behavior researcher at the University of Michigan who conducted the poll.

"Things that create an extra burden around meals are kind of the worst," she says. "There's a high-pressure situation of the perfect Thanksgiving dinner, as well as the everyday exhaustion of 'one more chore I have to do to take care of this family and you are making it harder.' "

Clark says the situation can create a layer of negativity or stress which, in turn, can cause parents and children to turn away from each other. "All of those things are real and can get in the way of having a healthy relationship between the teen and the parent," she says.

It's important for parents to realize that changes in diet are part of growing up, says Leslie Lytle, a nutritionist and professor of health behavior at the University of North Carolina Chapel Hill, who was not involved with the poll.

"They're trying to figure out who they are. For the most part, it's a good way to try out new identities, but it does cause conflict," she says. "Around holidays this can be really challenging, as you can get extended family who often may really challenge the child's [diet]."

The solution to most of this conflict is fairly straightforward, if not always easy, Lytle says. "The parent [should] approach it as, 'let's figure this out together.' " That was the tactic Lytle used when her daughter decided to become a vegan.

"Because I was so busy, she needed to get more involved in preparing the food she wanted. That way the burden is shared," she says. "There were nights when I just wanted to say, 'Please just eat this.' But it was not worth us arguing about. You don't have to worry about what your kid eats every night, as long as they are statistically healthy."

And for holidays, Lytle suggests parents deal with less-accepting relatives by saying, "Don't give her a bad time." At least, until your vegans or vegetarians are adults and have baked their own solutions.

Jessica Greene, who is 22, just brings her own food to holiday parties now. "It was awkward at first," she says. "But I'd rather have food I can eat."

This year, though, she is helping her mother cook the Thanksgiving feast. There will be a turkey, but they've planned for non-controversial food, too. "I'm making plain sweet potato," Risa Greene says. Everyone can eat what they want, and there's a lot less anxiety.

A previous version of this story incorrectly attributed a quote about making plain sweet potato to Jessica Greene. It was her mother who said she was making the dish.