Accessibility links
Tijuana Restaurant Revamps Menu To Give Haitian Refugees A Taste Of Home : The Salt Many Haitians seeking asylum in the U.S. are stuck in limbo in the Mexican border city. They've found the comforts of home cooking at a tiny eatery that ditched Mexican classics for all Haitian fare. 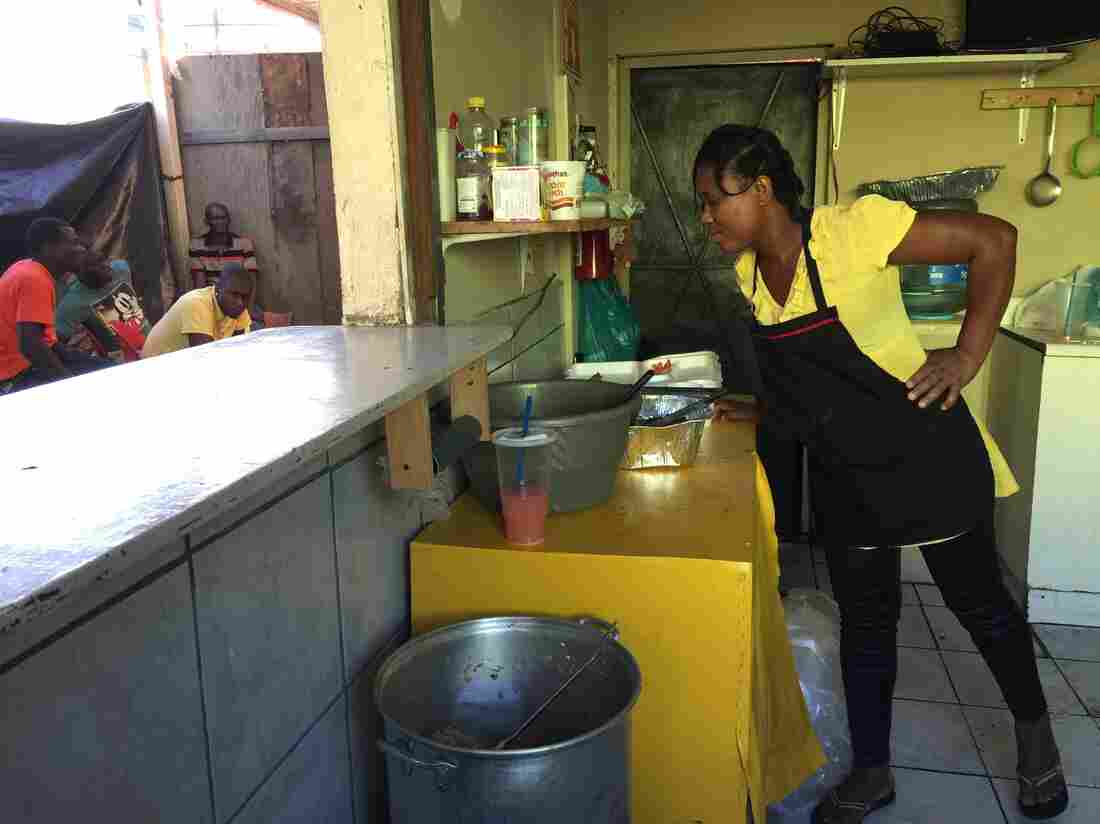 Chantale Joseph looks over a pot of Haitian rice and beans she's prepared for refugees living in Tijuana, Mexico. Recently, the eatery switched from Mexican fare to an all-Haitian menu. It's become a hangout for many Haitian refugees in the city. Alex Zaragoza for NPR hide caption

Markenson Germain sits on a rickety, pieced-together bench, devouring fork after fork of poul fri (fried chicken) sizzling over a bed of rice and beans, a staple of Haitian cuisine. He keeps his head down, smiling every so often as he fills up on the savory, delicately spicy dish.

Germain, a Haitian refugee living in Tijuana, crossed 10 countries before arriving in the Mexican border city just under three weeks ago. The road has been long, incredibly difficult and is not yet over. He waits in a foreign country for the opportunity to seek asylum in the United States, or possibly be deported back to Haiti. At this point, he's not sure what his future holds.

While he waits, he comes to Lonchería Dulce, where he can enjoy a home-cooked meal from his home country.

Lonchería Dulce is the first Haitian restaurant to open in the border city. About a month ago, the tiny, somewhat dilapidated luncheonette switched from a standard Mexican menu of foods like pozole and quesadillas to serving all-Haitian fare. It's a taste of home for the hundreds of Haitian refugees — and counting — currently living in Tijuana.

"When they first started to arrive, they were so happy," says Fausta Castillo Hernandez, who owns Lonchería Dulce. "They would say, 'Amiga! I'm here dying! I've gone three, four days without eating. Please make me some food! Make some more rice!'"

The menu makeover began a little over a month ago, when five Haitian women approached Hernandez, asking if they could use her kitchen to cook some meals. Word quickly spread in the refugee community that there was delicious homemade Haitian food to be had.

After a few days, the women made Hernandez an offer: If she let them cook and sell Haitian food from her kitchen, they'd share the profits. Hernandez agreed, and at first, she kept cooking Mexican staples. But the Haitian foods proved so successful, Hernandez soon revamped the whole menu. 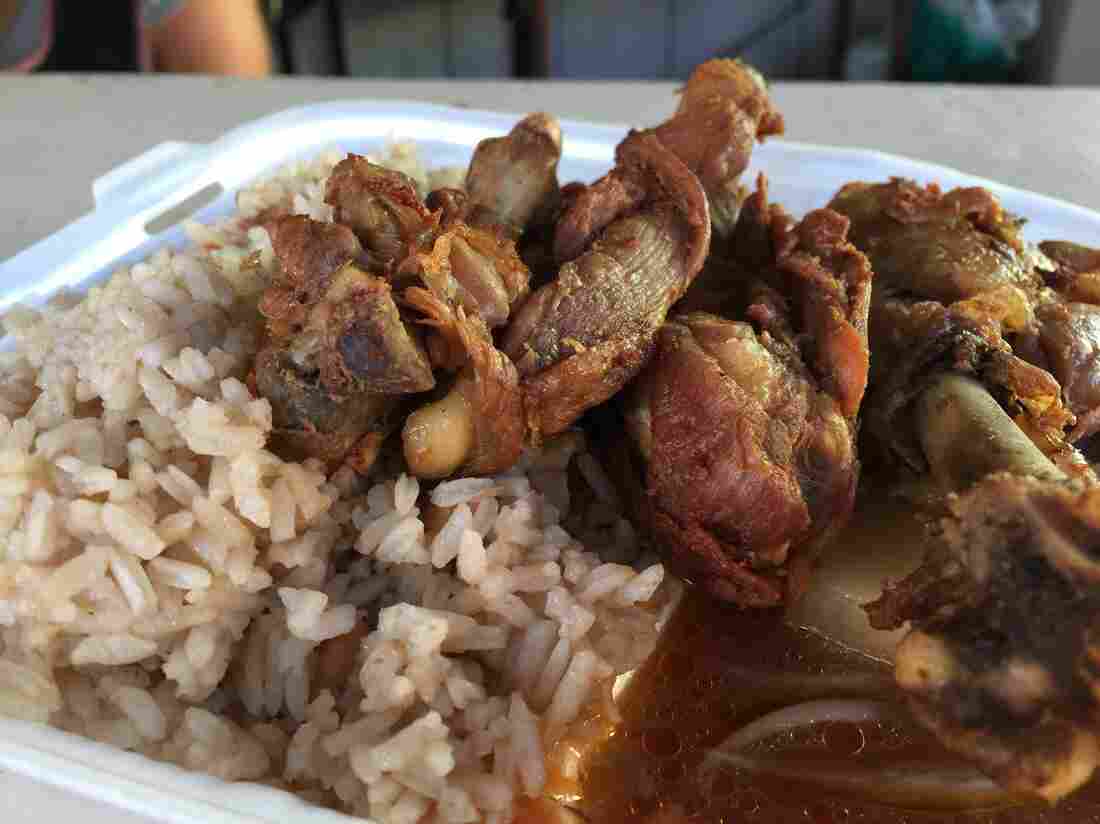 She charges locals and visitors — who have embraced the tasty new menu — 50 pesos (roughly $2.50) a plate; refugees pay 40 pesos (about $2). The price difference is designed to help offset the cost of feeding hungry refugees who might show up without money.

The women who originally came to Hernandez to create the Haitian eatery have moved on — either to the U.S. or elsewhere. Hernandez now cooks alongside Chantale Joseph, a 33-year-old refugee who arrived in Tijuana in October.

"I feel good cooking here," Joseph says. "The people from here, the Mexicans, are always happy with the food and treat me well."

The influx of Haitian refugees began following an earthquake in 2010 that destroyed much of the country.

Many refugees left Haiti for Brazil, where they found work building Olympic stadiums. Once those were completed, these Haitians found themselves without employment or permanent residence.

Hundreds began making the arduous and extremely dangerous journey by land to Tijuana, after the U.S. Department of Homeland Security announced that Haitians affected by the earthquake and seeking asylum would be granted entry into the U.S. on a humanitarian parole. Noncriminal deportations would be halted.

"We passed Colombia, Panama, spent more than a week walking, even up many mountains. It has been a lot of suffering," says Germain. "Many people died. Many women lost their babies."

Then in September, Homeland Security ended the ban on deportations. Those that present themselves at the border without U.S. entry documents now face detention and deportation.

Germain opens his wallet and takes out his entry papers. His appointment for possible entry into the U.S. isn't until mid-December. In the meantime, he waits, finds odd jobs wherever he can and comes to Lonchería Dulce to get a belly full of home.

"They told us that in no other area or country had anyone created a luncheonette or space for them to have their own food other than here in Tijuana," says Hernandez, who helps cook traditional Haitian meals like rice and beans, poule en sauce (stewed chicken), bannann bouyi (boiled plantain) and poule fri.

She's even made a few meals on her own when Joseph or another one of her kitchen comrades has been unable to come in. And while she hasn't mastered every Haitian dish, Hernandez says she's heartened by the fact that every morsel she has made on her own gets eaten. 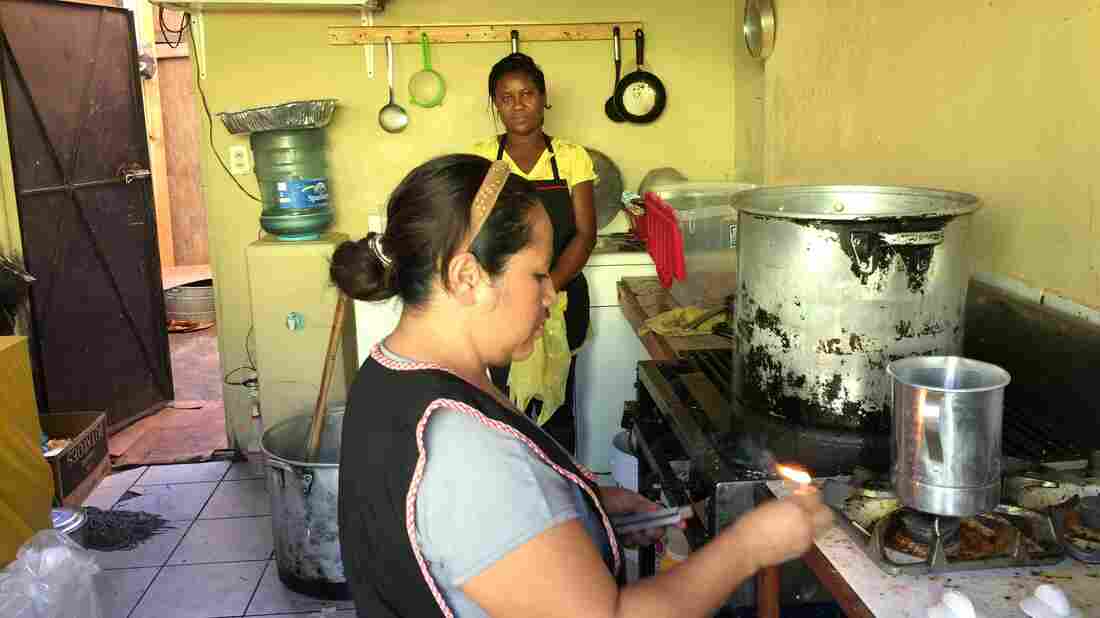 Hernandez speaks only Spanish; Joseph speaks French. Nonetheless, they manage to communicate and cook together through hand gestures, a few words learned from each other's languages and the help of Spanish-speaking Haitians willing to translate. They refer to one another as amiga warmly.

Joseph teaches Hernandez how to prepare the marinade for Haitian chicken, which has no fewer than 10 ingredients, including garlic, onion, lemon, vinegar, jalapeño chilies and habanero chilies. That last ingredient was tough to communicate, however.

"She would say "Pepper! Pepper!" and I would hand her the pepper, but that's not what she needed," recalls Hernandez with a laugh. "What she needed was habanero peppers. For them, that's pepper. I was giving her ground pepper and whole pepper, and she'd say "No, that's not it!"

Since then, the women often shop together to make sure the right pepper is purchased.

Lonchería Dulce has become a hangout space for Haitian refugees. They play cards, pick up donations — like clothes — dropped off there, joke around and share their stories and fears with Hernandez and her family. They offer each other support — especially now, with growing concerns about how immigrants and refugees will be treated under a Donald Trump presidency.

And, of course, they eat.

"They come here a lot. I mean, they don't have anywhere else to go," says Hernandez.