Accessibility links
Are Food Allergies On The Rise? Experts Say They Don't Know : The Salt Despite assumptions that peanut and other allergies are becoming more common in the U.S., experts say they just don't know. One challenge: Symptoms can be misinterpreted and diagnosis isn't easy. 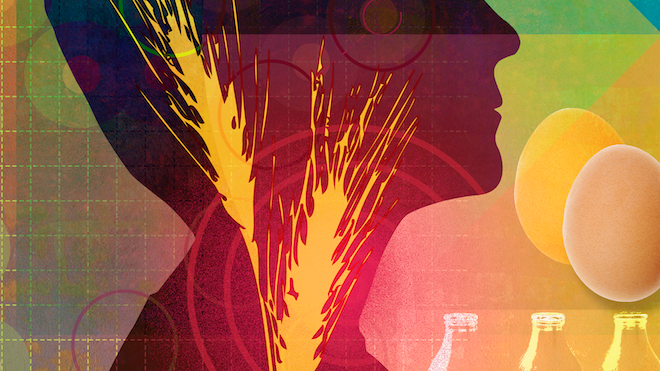 Despite assumptions that peanut, egg and other allergies are becoming more common in the U.S., experts say they just don't know. One challenge: Symptoms can be misinterpreted and diagnosis isn't easy. Roy Scott/Getty Images hide caption

A new report from the National Academy of Sciences says it's hard to know how many people in the U.S. actually have food allergies or whether they're on the rise.

Part of the challenge is this: Food allergies are often self-diagnosed and symptoms can be misinterpreted. Sometimes people can't distinguish a food allergy from other conditions such as lactose intolerance or gluten sensitivity, which don't fit the medical definition of an allergy.

"There are a lot of misconceptions about what a food allergy is," says Dr. Virginia Stallings, a board-certified nutrition pediatrician at the The Children's Hospital of Philadelphia and the chair of the committee that wrote the new report.

One scenario is this: A parent of a young child introduces a new food — say, milk — into the diet, and then notices the child has an upset stomach or other symptoms of gastrointestinal distress.

The parent may suspect a food allergy. But, perhaps, these are signs of lactose intolerance — a completely different condition.

"The reason food allergy symptoms are often confused with other [conditions] such as lactose intolerance is because there's an overlap in some of the symptoms," Stallings explains.

An allergy is an immune response to a food or other substance that is normally harmless. Common symptoms include hives and swelling or GI distress. Food allergies can be life threatening. Lactose intolerance, on the other hand, means a person can't easily digest the natural sugar found in milk. And, as the American Academy of Pediatrics points out in this FAQ on the topic, "while lactose intolerance can cause a great deal of discomfort, it will not produce a life-threatening reaction such as anaphylaxis."

Adding to the confusion, food allergies can be complicated to diagnose.

"We do not have an optimal diagnostic tool. There isn't one skin test or blood test" that can accurately determine whether a person has an allergy to a specific food, says Stallings.

Stallings says if parents recognize clear signs of allergic reactions, such as swelling lips or difficulty breathing, they should seek emergency care.

But, often times, the symptoms are milder. In these cases, rather than self-diagnosing an allergy, families should see an expert, such as a pediatric allergist. The National Academies of Sciences "committee really does recommend that people seek more expert advice," Stallings says.

Lots of families jump to conclusions about food allergies before being tested. "We unfortunately see kids avoiding a food unnecessarily because of some fear of a potential allergy," says Bruce Lanser, who directs the pediatric food allergy program at National Jewish Health in Denver.

Lanser says the gold standard test used to diagnose a food allergy is known as an oral food challenge. Under medical supervision, patients eat small amounts of the food they may be allergic to. "We start with a small amount of food and slowly give increasing doses up to a full serving," Lanser explains. If the patient has a reaction during the test, "we obviously stop and treat."

Lanser says he tests many of his patients once a year to see if they've outgrown their food allergies. And often they have. "Milk and egg allergy are commonly outgrown," he says. And "about 1 in 5 people outgrow their peanut allergy."

The new report recommends more research to determine the prevalence of food allergies. In addition, the report is full of recommendations to address food-allergy safety.

For instance, if kids do have an allergic reaction to food, they may need a shot of epinephrine to treat severe symptoms. Many schools only have a school nurse trained to deliver these potentially life-saving shots. The committee says schools should consider training other administrators and teachers to be ready to administer the drugs in case of emergency.