Accessibility links
Americans Don't Trust Scientists' Take On Food Issues : The Salt A new survey finds strong public support for organic food, and suspicion of GMOs — regardless of whether people vote Republican or Democratic. Also, people don't trust scientists much at all. 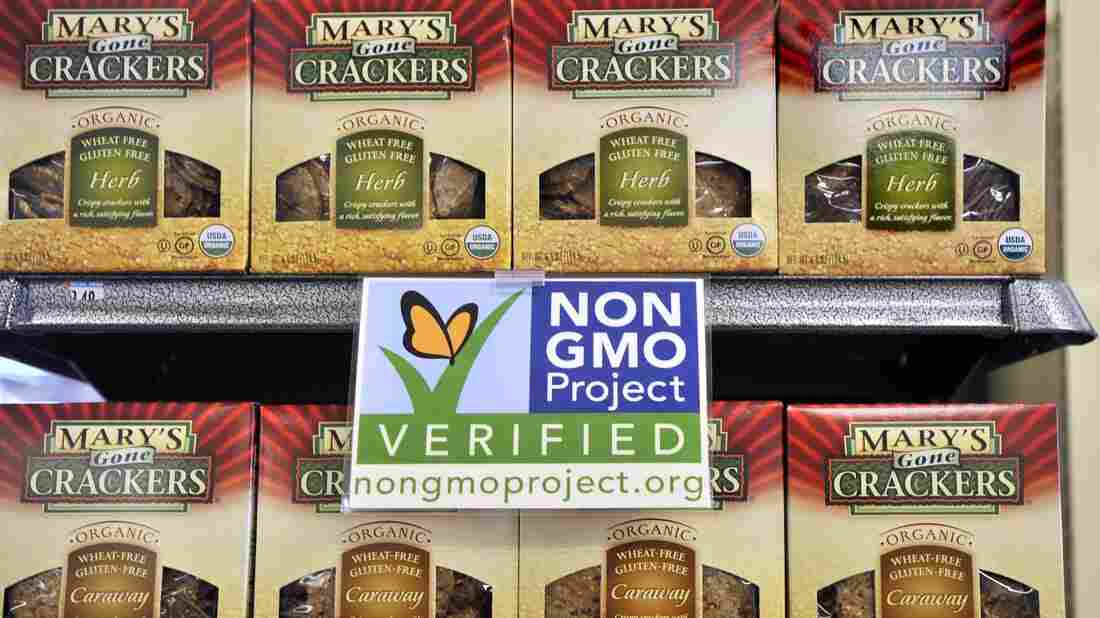 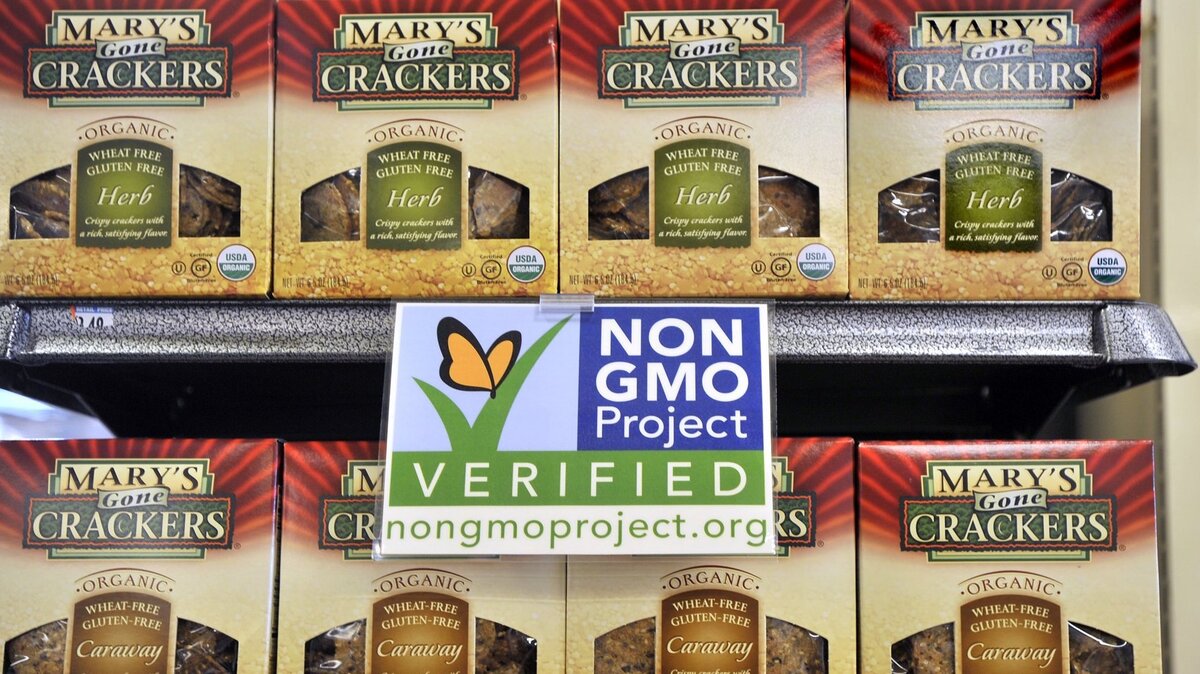 Non-GMO labels, like this one at Whole Foods, may strengthen consumer perceptions that genetically modified foods may carry risks to health.

If you're curious about what people really think about some of the hottest of hot-button food controversies, the Pew Research Center has just the thing for you: a survey of attitudes toward genetic modification, organic food and the importance of eating healthfully.

The survey results are published in a 99-page report that can keep you occupied for days. But if you're pressed for time, here are some of the most interesting highlights that caught our eye.

1. A lot of Americans don't care what scientists think about GMOs

For instance, 39 percent of the survey participants believe that genetically modified foods are worse for your health than non-GM food. However, there's essentially no scientific evidence to support that belief — a conclusion confirmed most recently by a National Academy of Sciences report. Among the relatively small group who say they care about the issue of GM foods "a great deal" (16 percent of the public), three-quarters believe that GMOs are bad for your health.

At the same time, it's notable that almost half the respondents — 46 percent to be precise — say that they care about the issue of GMOs "not too much" or "not at all."

And finally, there is deep cynicism about the motives of scientists. According to the survey, Americans feel that research findings are influenced in equal measure by the following factors: the best available scientific evidence; desire to help their industries; and desire to advance their careers. In the view of the public, all of those factors are more important to scientists than concern for the public interest.

Scientists can take heart, though, from one other finding of the survey. People still trust them more then politicians. Sixty percent of the public still wants scientists to play a major role in government policies toward GM foods. Remarkably, only 24 percent of Americans want their elected officials to have a major role in such policies.

This result is quite different from what Pew found in surveys about climate change, says Cary Funk, the Pew Research Center's associate director of research on science and society. When it comes to climate change, she says, liberal Democrats are much more likely to believe that humans are responsible. Food issues, by contrast, are not as politically polarized.

The survey also didn't find any major differences between men and women, or between rich and poor, when it came to views about GMOs or about the healthy qualities of organic food. The wealthy, however, were more likely actually to buy organic food regularly.

Finally, there's an overwhelming consensus about one point; 72 percent of Americans believe that healthy eating habits are very important in improving one's chances of a long and healthy life, and an additional 25 percent say that it's somewhat important. But most (58 percent) also say they fall short of their goals and that "most days I probably should be eating healthier."

If you look closely at the results, you find that there aren't clearly defined groups of people who all believe the same things about various food issues.

For instance, 18 percent of Americans say that their "main focus" is eating healthy and nutritious food. And 16 percent says that they care about genetically modified foods "a great deal." But these are not the same people. Only a third of the people who care most about eating healthfully also care a lot about GMOs.

And whether a person cares about eating healthful food or not is no predictor of whether he or she considers GMOs to be bad for health.

Finally, support for local and organic food seems to be much more mainstream than the opposition to GMOs. Almost three-quarters of Americans said that they bought local food recently, and just over two-thirds said they had purchased organic food. By comparison, a much smaller group — 44 percent — reported that they'd recently bought food labeled "GMO-free."