Accessibility links
Southern Madagascar On The Edge Of Famine Amid Drought : The Salt Fighting extreme poverty and failing crops caused by a three-year drought, United Nations food agencies are struggling to keep the region's population from succumbing to starvation.

Drought-Stricken Southern Madagascar Teeters On The Edge Of Famine

Drought-Stricken Southern Madagascar Teeters On The Edge Of Famine 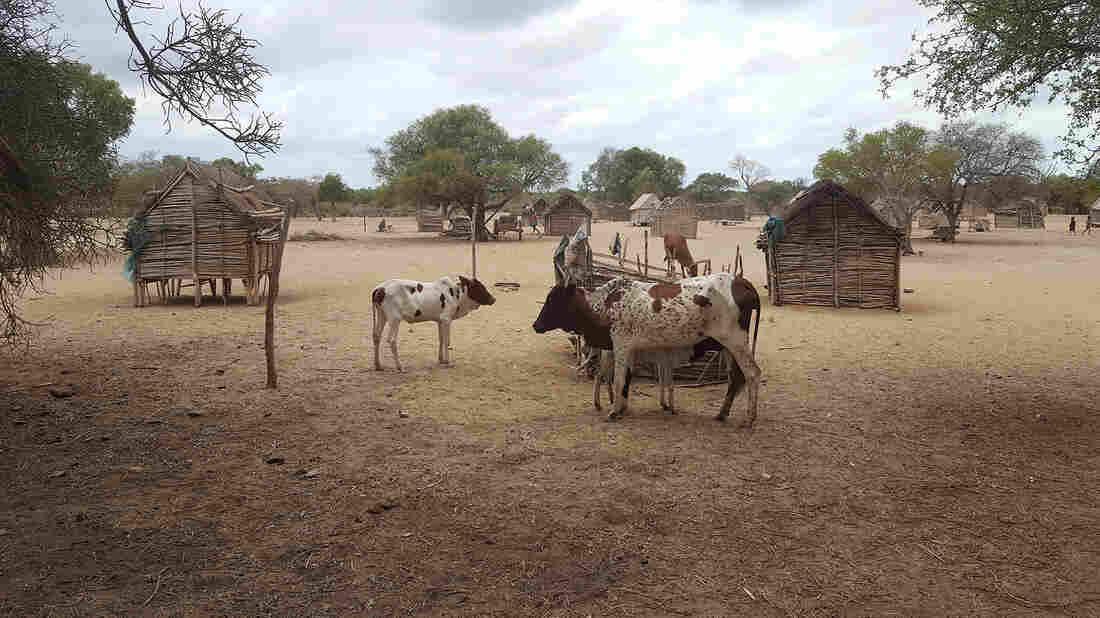 A hamlet between the towns of Tsihombe and Ambovombe, in the most drought-stricken area in southern Madagascar. Most families in the region have resorted to eating wild fruits and tree leaves. Courtesy of Jeanluc Siblot hide caption 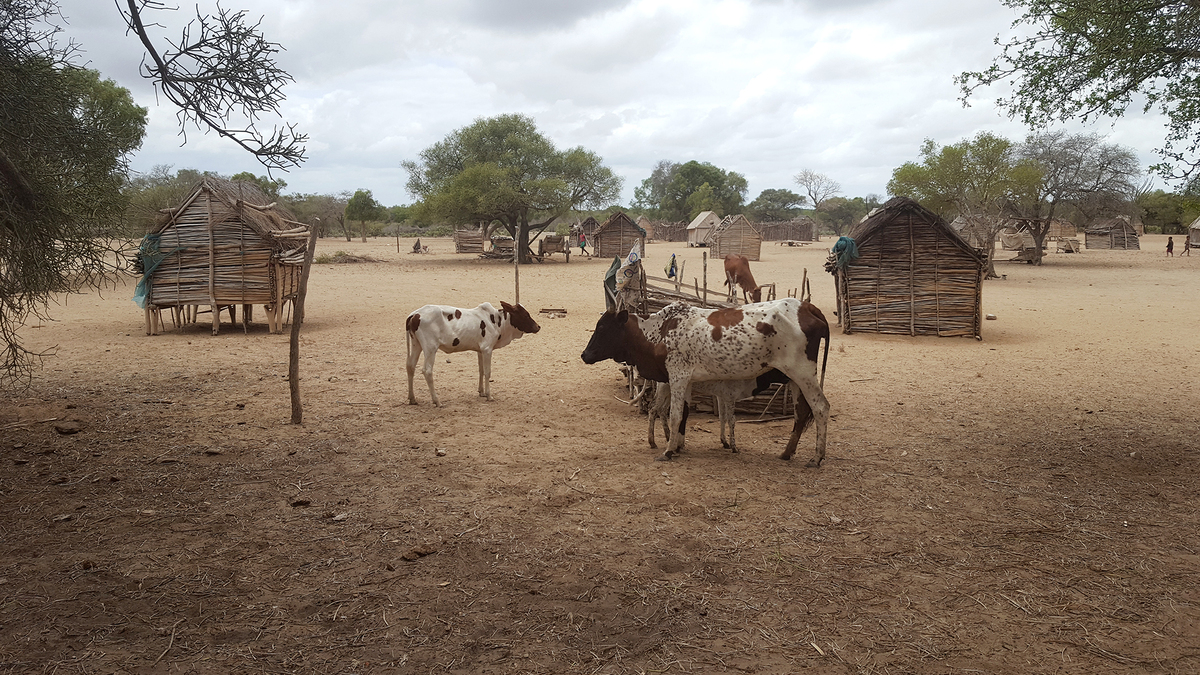 A hamlet between the towns of Tsihombe and Ambovombe, in the most drought-stricken area in southern Madagascar. Most families in the region have resorted to eating wild fruits and tree leaves.

The people of southern Madagascar are on the brink of a famine and need immediate humanitarian aid, according to United Nations food agencies. A three-year drought, exacerbated by this year's El Niño, has caused harvests to continue to fail. And people are left with no money and almost nothing to eat.

Just over half the region's population, about 840,000 people, is severely affected. And 20 percent of the population is in an emergency situation, according to the Integrated Food Security Phase Classification, a standardized five-point scale used by scientists to rate the level of a region's food security. That segment of the population is in Phase 4, with Phase 1 denoting an abundance of food and Phase 5 meaning famine.

Despite its rich biodiversity, Madagascar is, in fact, one of the poorest countries in the world. According to the World Bank, nearly 60 percent of the population lives in extreme poverty and the vast majority live in rural areas, like the dry, drought-affected south. "Ninety percent of the population in the south is living under the poverty level," says Jeanluc Siblot, the emergency coordinator for the U.N. World Food Programme (WFP) in Madagascar. "Forty percent of kids are suffering from malnutrition."

Most people there are subsistence farmers, growing corn, cassava and rice. They plant around November and December, and harvest between April and June. Food is scarce each year from October to March (the lean season), when stocks from the previous harvest start to run low. Farmers do plant some vegetables, which they harvest around January and February, says Siblot.

"Agriculture there has been affected to the point that for this year the level of production was 90 to 95 percent lower than usual," says Dominique Burgeon, the director of the U.N. Food and Agricultural Organization's (FAO) Emergencies and Rehabilitation Division.

"The harvest in May-June has been catastrophic," says Siblot. As a result, he says this year's lean season has started much earlier than usual. "Since September, many households don't have any food stocks anymore."

People have turned to selling their animals and other possessions – farming tools and household goods – to get some cash to buy food, which is mostly cassava. "It is the cheapest food," Siblot says. "People are eating this dry cassava, which is not a very nutritious food ingredient."

Those with nothing more to sell, or those who live in remote areas with no markets nearby, have resorted to eating wild fruits and vegetables.

"We have even seen some people mixing clay — because there is some salt in it — with some wild fruits and wild vegetables," he says. They are also eating the fruits of a red cactus plant that is abundant in the area. "The cattle, they call them zebu, are also eating this. People are removing the needles from the cactus and the cattle are eating cactus leaves."

Many families have pulled their children out of school. "We have also noticed that 31 percent of the households reported primary school dropouts," he says. "They use their children to go to the forest to look for fruits and cactus flowers and leaves." In places that are less remote and still have some functioning markets, many people have resorted to begging, he adds.

The WFP launched an emergency operation in June, says Siblot. The agency is giving cash and food — packages with cereals, pulses and oil — to the most affected communities. And the FAO plans to start distributing plant cuttings and drought-resistant seeds, so farmers can plant right now. 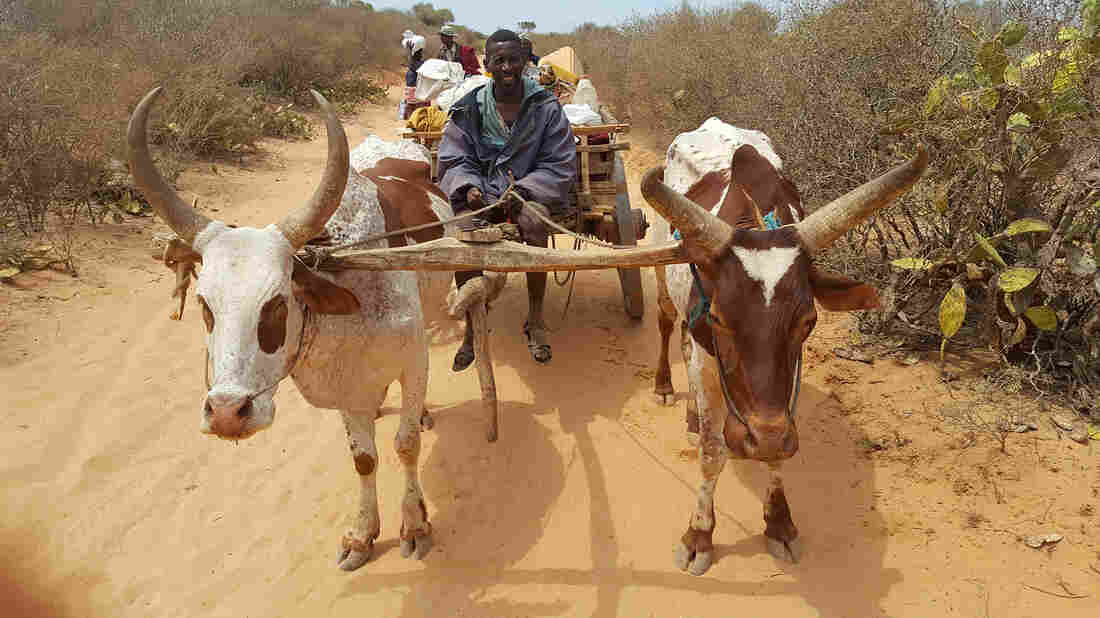 A man starts a three-hour journey back home after collecting food for his family and neighbors from a food distribution center run by the World Food Programme in southern Madagascar. Courtesy of Jeanluc Siblot hide caption 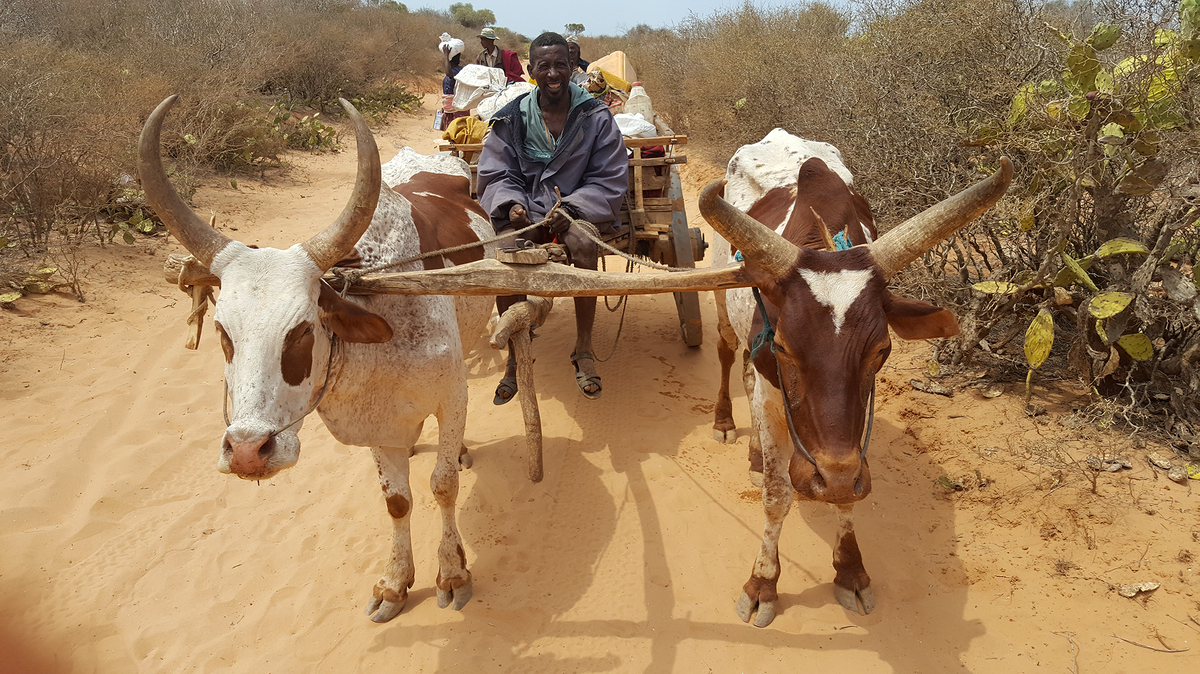 A man starts a three-hour journey back home after collecting food for his family and neighbors from a food distribution center run by the World Food Programme in southern Madagascar.

"If farmers aren't able to plant in the coming weeks, it means these people will rely on food aid until March 2018," Siblot says, adding that the FAO is also planning to help farmers with feed and animal vaccinations.

However, both agencies say they don't have the funds to help everyone in the region. Several countries, including the United States, have donated money to help both agencies, but it hasn't been enough. "We need $22 million," says Burgeon. "So far we have only $4.5 million." And the WFP needs an additional $50 million, he says.

"If we don't get any additional funding, the situation will not improve," says Siblot. "We have some food for the next two months. We need something more."

Meanwhile, according to the Famine Early Warning System Network, an independent network of American agencies that forecasts food shortages around the world, the situation in Madagascar is likely to remain dire through February 2017. Without immediate humanitarian assistance, the situation could deteriorate into a famine, which means rates of acute malnutrition would soar and people would start dying from hunger.

"They're really, really struggling to survive," says David Orr, the communications officer at the South Africa office of the WFP. "There's very little keeping them from falling over the edge."