Accessibility links
Philly's New Pay-What-You-Can Restaurant Brings Everyone To The Table : The Salt A hunger researcher and two restaurateurs teamed up to open EAT Café, a restaurant that aims to provide a sit-down dining experience even to people who typically can't afford to eat at restaurants. 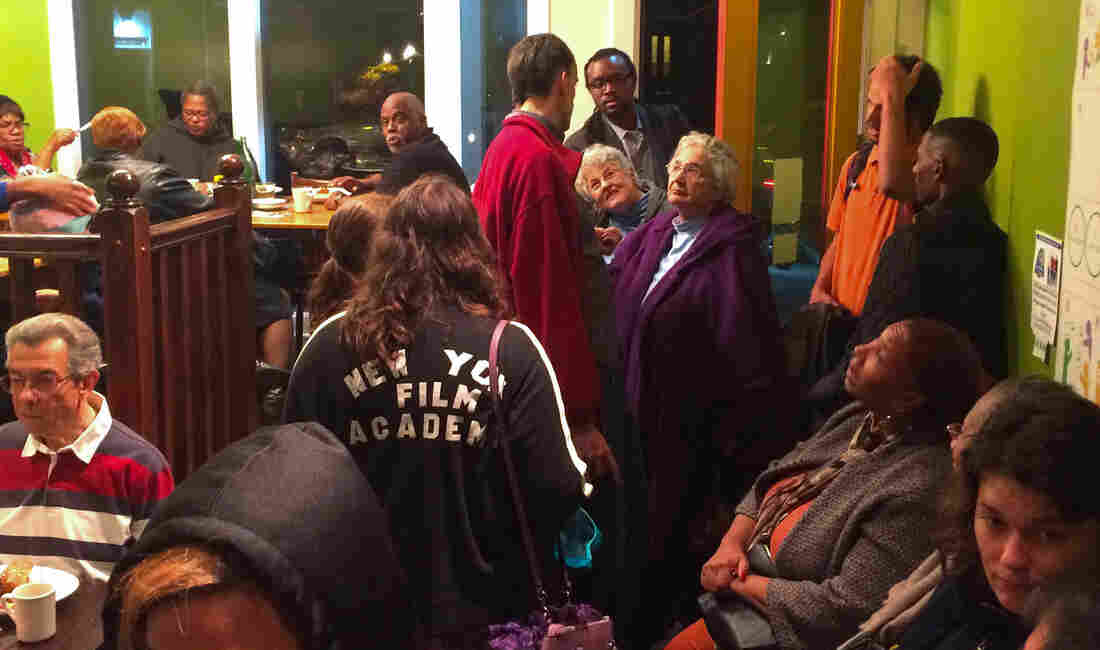 It's a packed house at Philly's EAT Café, which is trying to attract people of all income levels for a sit-down dining experience. Kristen Hartke for NPR hide caption 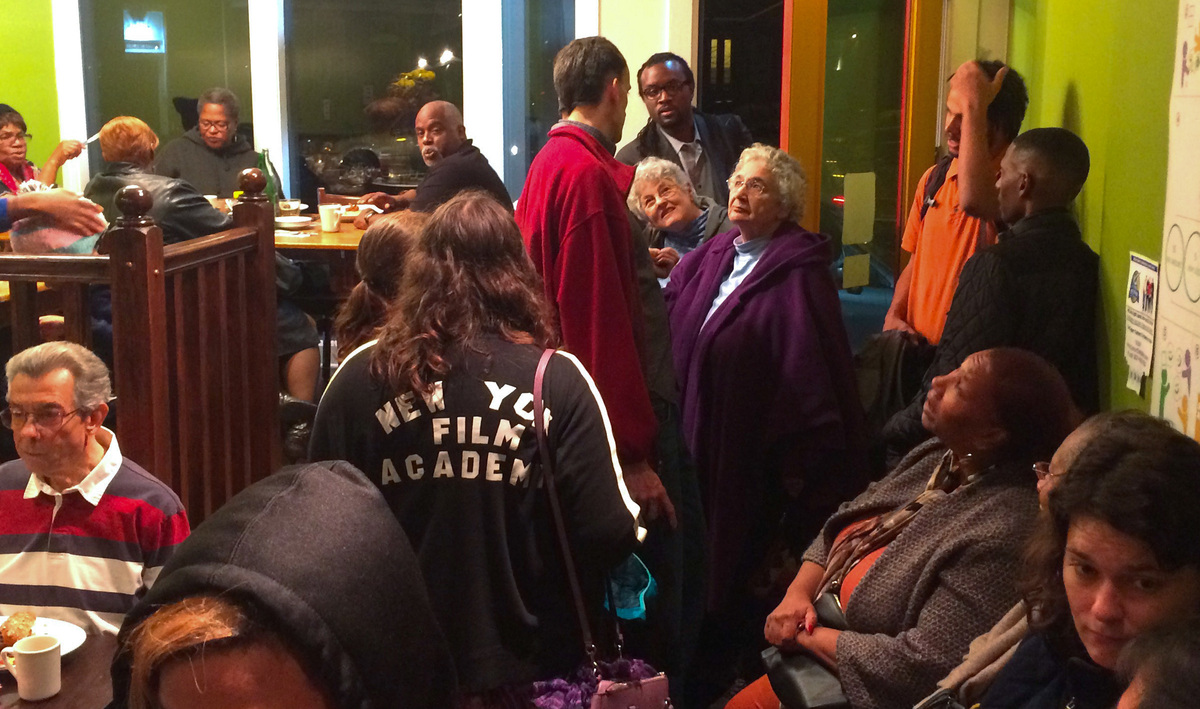 It's a packed house at Philly's EAT Café, which is trying to attract people of all income levels for a sit-down dining experience.

It's 6 p.m. on a Wednesday night and there's a line out the door at EAT Café. Inside, executive chef and restaurant manager Donnell Jones-Craven is busy plating up salads and burgers, but he pauses to sprint out into the dining room. "I appreciate so much that you're all here for dinner tonight!" he calls out to those still waiting in line. "Just bear with us and we'll get you seated as soon as we can."

Tucked into a crossroads of several West Philadelphia neighborhoods near Presbyterian Hospital and Drexel University, EAT Café is in the throes of its busiest night since opening six weeks ago in October.

EAT, which stands for "Everyone At the Table," is the first restaurant of its kind in Philadelphia. The not-for-profit restaurant aims to provide a sit-down dining experience to residents of the city's low-income neighborhoods by allowing patrons to pay whatever they can afford for their meals.

"It's really exciting to see so many people here tonight," says Joe Alberti, a fifth-grade teacher in the local public school who lives nearby and also serves on the nonprofit restaurant's Community Advisory Committee. "It makes me feel like we really are on to something."

It all began five years ago, when Mariana Chilton, a hunger researcher and the director of Drexel University's Center for Hunger-Free Communities, realized something from her conversations with people in Philadelphia's poorest communities: Eating at a restaurant wasn't just a luxury; it was simply impossible.

"Sit-down restaurants don't even exist in many low-income neighborhoods," says Chilton. "There will be take-out spots or some fast food, but that's really it. There is simply no place where families or couples can sit down and have a meal together in a way that feels special. It's as if we have this idea that poor people don't deserve to go out to eat."

Chilton wanted to change that. Attracted by the idea of creating a nonprofit pay-as-you-go restaurant, similar to SAME Café in Denver and JBJ Soul Kitchen in Red Bank, N.J., Chilton rounded up an initial $250,000 in grant money to fund a similar project in Philadelphia. But she had no idea how to start a restaurant. "I'm a researcher," she says, laughing. "I have absolutely no idea how to run a business."

Then, a chance conversation with Philadelphia restaurateurs Marc Vetri and Jeff Benjamin led to an unexpected partnership that helped bring the expertise that Chilton lacked. The duo was already active in local schools through the Vetri Community Partnership, which provides nutritious meals to schoolchildren.

"We were talking with Mariana about how to expand the work we already do in Philadelphia, just tossing around ideas," says Benjamin. "Right at the end, she asked if she could pick our brains about this idea she had for opening a nonprofit cafe. We were like, 'Why didn't you bring this up two hours ago?' We knew it was a natural fit for us."

The restaurateurs also knew that location was key to success. Chilton's original idea of setting up shop in a deeply impoverished neighborhood would not be a good business model, they realized. For the concept to thrive, the restaurant needed to be in an area where it could draw on a variety of customers — those who could afford to pay the $15 suggested price for a three-course meal, and those who could not.

The community that they eventually settled on, Mantua, just a couple of miles from Philadelphia's center, is surrounded by neighborhoods boasting everything from historic homes to urban farms, each with a history of civic pride and local activism, as well as economic ups and downs. Above all, it offered the cross-section of income levels needed to provide that ready supply of customers, from local hospital employees and college students to middle-class and low-income residents.

"If we'd opened the restaurant in the communities I was originally thinking of," says Chilton, "we simply wouldn't have been able to build a customer base that could support both the business model and the community at the same time. Where we ended up really helps meet the mission." 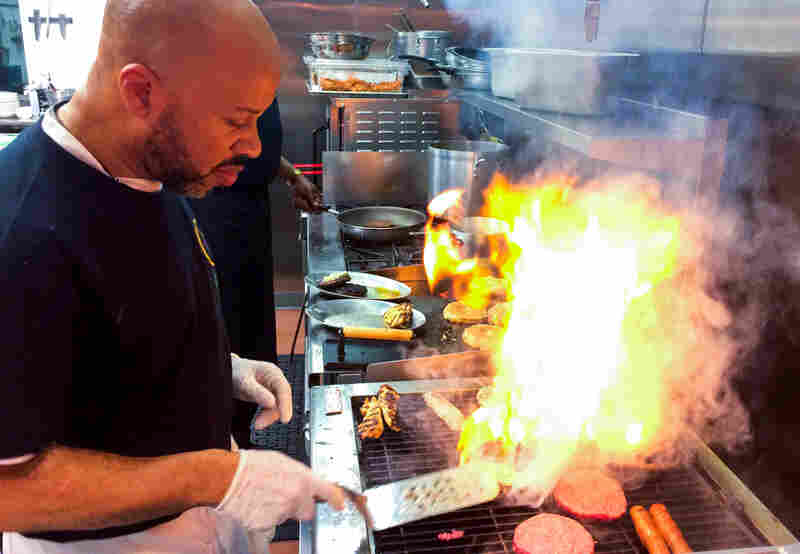 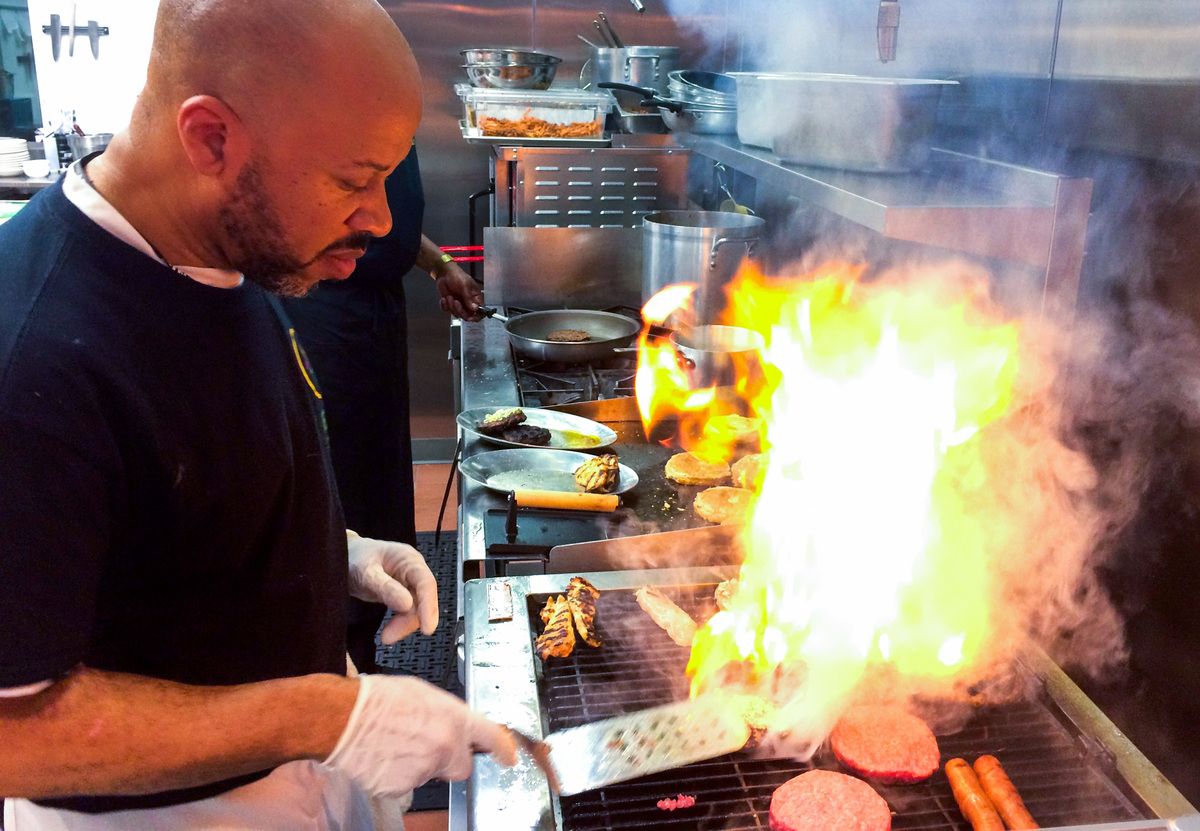 They found a developer to renovate a rundown row house, converting the upper floors into income-generating apartments. The street-level restaurant was designed with an open kitchen, walls in shades of aubergine and spring pea, and farmhouse-style tables by a large bay window. The tables are set with napkins, cutlery, glassware and candles, and there's table service.

Developing a menu was a key focus for chef Craven-Jones, a recent transplant from Atlanta with experience cooking in upscale retirement communities and an interest in creating meals that are both nutritious and flavorful. The menu changes weekly, offering choices for starters, entrees, and desserts, with options to accommodate dietary restrictions and allergies; this week's menu included fresh tomato-basil soup, an herb-dusted grilled chicken sandwich with pesto mayo, and a burger topped with blue cheese and balsamic glazed onions and mushrooms.

While food is purchased from vendors, just like at any restaurant, donations also show up daily, including 5 pounds of salad greens brought in by local resident Uwa (who goes by one name) and his 8-year-old son. They had just picked the greens from Urban Tree Connection, a network of community gardens for low-income neighborhoods, where Uwa is assistant farm manager. "I like that they incorporate all the donations into the meals here," says Uwa, who stayed to have dinner with his wife and kids. "This is good, sustainable food, and that's important for the community."

Giant Food, Metropolitan Bakery and La Colombe Coffee are among some of the regular contributors to the kitchen's pantry. Craven-Jones, who wants to expand the restaurant's hours to include breakfast, lunch and brunch, expects to be working with La Colombe in the future on a coffee program.

This type of buy-in from the local community has been essential. Kevin Brown, a member of EAT Café's advisory committee and an employee at a nearby nonprofit, was skeptical when he first heard about the concept, as were neighbors.

"We had community meetings where people had a lot of questions," says Brown. "They wanted to know, 'Am I going to be eating dinner next to a homeless guy who smells?' I think people wondered if this was just going to be another soup kitchen. But now that it's open, they see that everything is made with love and care. It's inviting; it's cozy."

Calla Cousar, another advisory committee member, brought her son and daughter-in-law to EAT Café for dinner with her on this busy Wednesday night, sitting by the big bay window and chatting with a family of five at the next table. The president of East Parkside Residence Association, Cousar particularly likes the way the restaurant handles payment; after dinner, the bill arrives in a closed check folder, then guests can choose to pay in any amount, including nothing at all. "No one has to be embarrassed if they can't afford it," says Cousar.

For chef Craven-Jones, that anonymity is key to building a restaurant that serves everyone who comes through the door, regardless of income. "We're engaging the community through nutritious food," he says, "and there are enough people coming here who are paying more than the suggested price to balance out those who can't." Just recently, a group of 20 diners came in and left an additional $130 on top of what they owed.

And that goes a long way to pay for those who can't afford a full-price meal here. In the first six weeks, the average check came out to $12.31, a few dollars below the suggested price; early figures suggest that about 40 percent of diners are paying less than full price, in the range of $7 per meal. "We have very few people who pay nothing," says Chilton. "If people have 50 cents or $3, they are putting that down. People want to pay something for their meals."

Brown sees an opportunity for EAT Café to have a long-term impact. "I'd like to see that this place inspires other people to open traditional restaurants in this area — bring their gastropub here instead of downtown."

He pauses. "But it would still need to be a place that the community can enjoy, not something that prices the locals out of the market," he says. "If that happened, then it would defeat the purpose of what EAT Café is trying to do here."