Accessibility links
North Platte Canteen: Where The Heartland Opened Its Heart In WWII : The Salt At this bustling Nebraska railroad hub, volunteers — mostly women — greeted and fed about 6 million soldiers. And the taste of those home front meals was a comfort to troops on the battlefield.

North Platte Canteen: Where The Heartland Opened Its Heart In WWII

North Platte Canteen: Where The Heartland Opened Its Heart In WWII

On his darkest days as an infantryman during World War II, Russ Fay found comfort in the memory of a pheasant sandwich.

Fay was fresh out of a Wisconsin high school when he was inducted into the Army in 1944 and boarded a troop train for basic training. En route to California, the train stopped in North Platte, Neb., where several women greeted the soldiers with baskets of sandwiches and bottles of cold milk. Fay devoured a pheasant sandwich with mayonnaise, an experience that lingered with him on Europe's battlefields.

"I can still taste it," Fay told journalist Bob Greene in an interview for the 2002 book Once Upon a Town. "I would say that a majority of the men on the battlefields knew exactly what North Platte was. ... They would talk about it like it was a dream. Out of nowhere: 'How'd you like to have some of that food from the North Platte Canteen right about now?'"

The North Platte Canteen was a lunch counter at the Union Pacific Railroad station where volunteers—almost all women—provided food, cigarettes and magazines to soldiers. One of approximately 120 community-based canteens in the United States during World War II, North Platte was by far the largest. From Christmas of 1941 through April 1, 1946, volunteers greeted and fed about 6 million service members. By comparison, the second largest canteen, in Lima, Ohio, served 2.5 million soldiers.

Ray Merrell, a Marine veteran living in Liberty, Missouri, rode a troop train through North Platte in November of 1942. It's been 74 years, but he still has vivid memories of the 10-minute stop.

"The weather was nice that day when we got off the train. There were probably ten women in the railroad depot," Merrell says. "They just opened up the canteen to us, helped us with anything we wanted: sandwiches, deviled eggs, cookies and cake."

Canteens arose with the swell of patriotism that accompanied the United States' entry into the war. Women and children planted victory gardens, collected scrap metal and bought victory stamps and war bonds.

Women's magazines framed domestic labor as a national duty, urging women to soldier on through shortages and expand their caretaking role to all of the nation's sons. The USO Bulletin told women in 1941 that "maintenance of morale can be largely a housekeeping job." About a quarter of U.S. women volunteered with various relief organizations during the war. 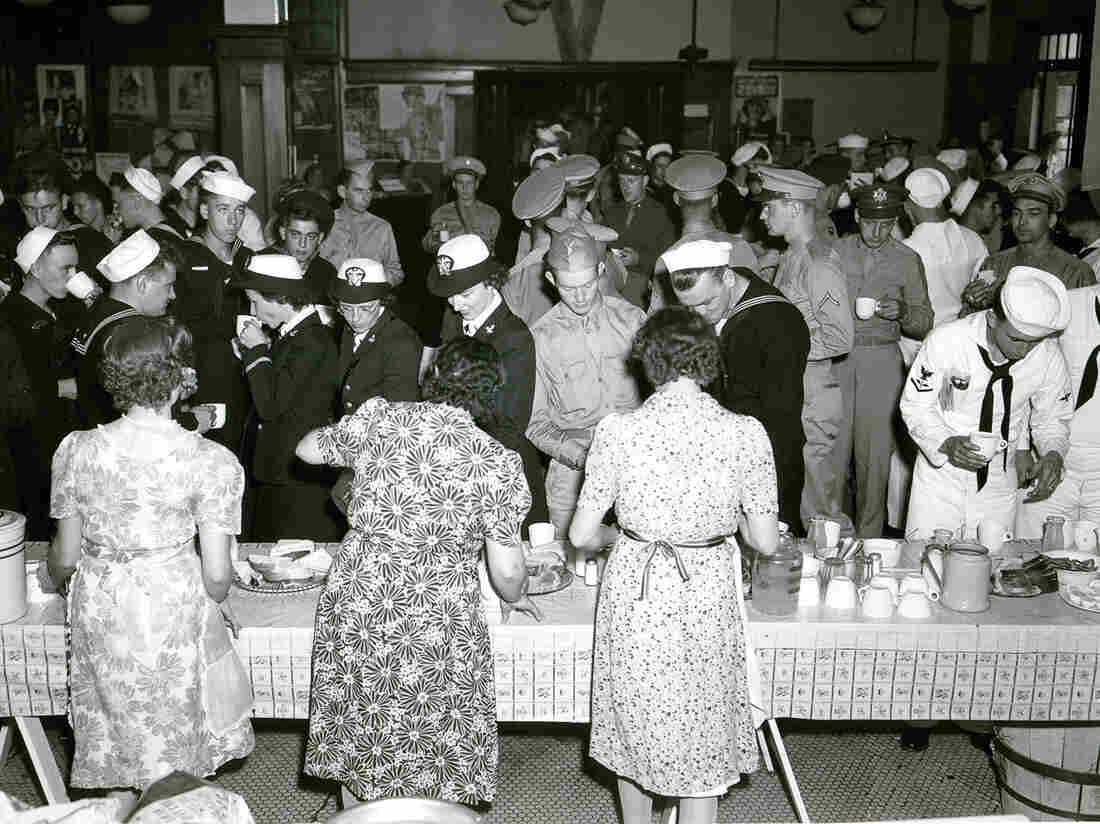 Service members of all ranks and branches of the military were welcome at the North Platte Canteen. Courtesy of the Lincoln County Historical Society hide caption 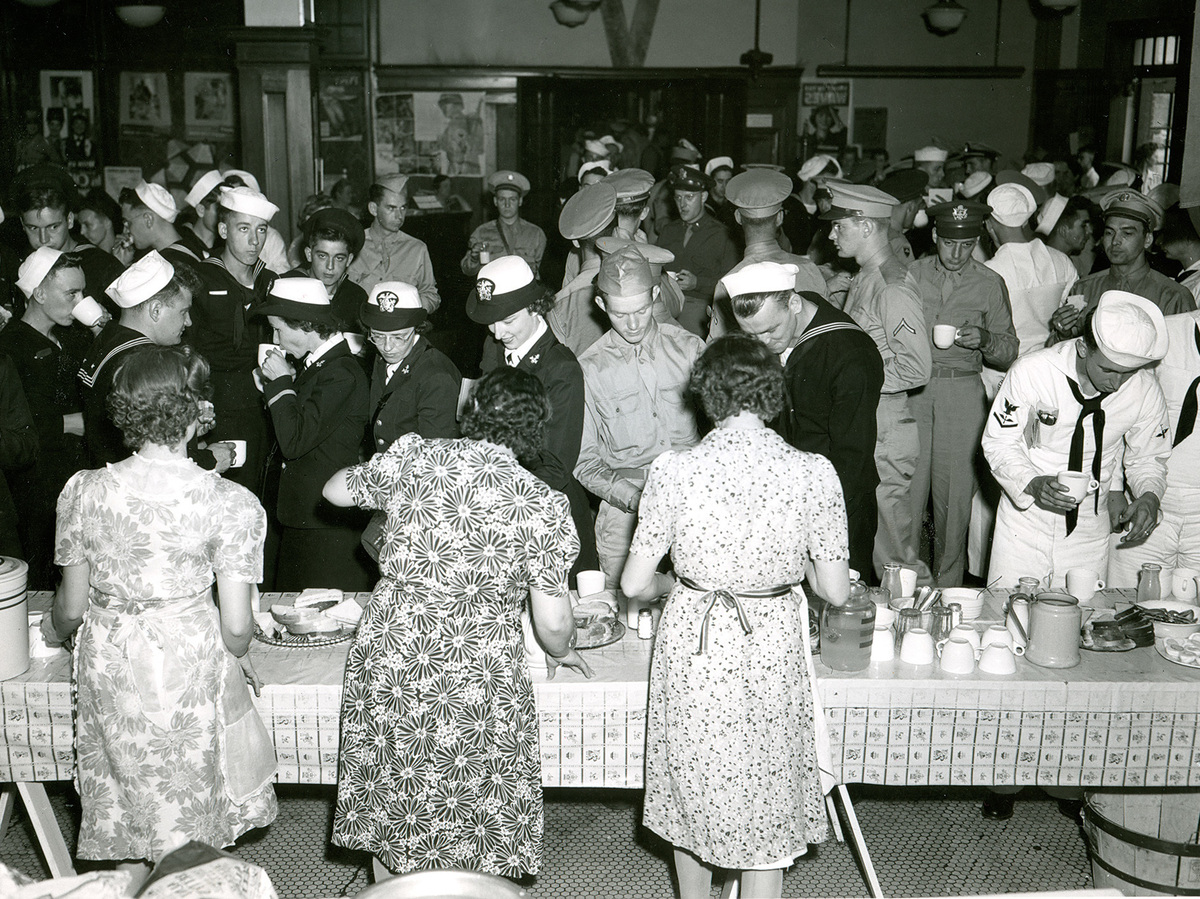 Service members of all ranks and branches of the military were welcome at the North Platte Canteen.

As a railroad hub in the heart of rural America, North Platte was uniquely situated for a grassroots canteen. Here, sentiments about women's work overlapped with an agricultural brand of patriotism.

"Farmers viewed themselves as part of fighting the war by producing food for troops overseas," says David Vail, an agricultural historian at the University of Nebraska at Kearney. Much of the food served in North Platte —meat for sandwiches, hard-boiled eggs, homemade pickles—came from area farms. The entire region took ownership of the endeavor. All told, 125 towns sent an estimated 55,000 volunteers to the North Platte Canteen.

Lorene Huebner was a teenager on a farm near Hershey, Neb., when she accompanied her mother on several trips to the canteen. Huebner, who still lives in Hershey, recalls transporting fried chicken to North Platte in three-pound coffee cans.

"The smell of the chicken when you took those lids off," Huebner says. "Heavenly." 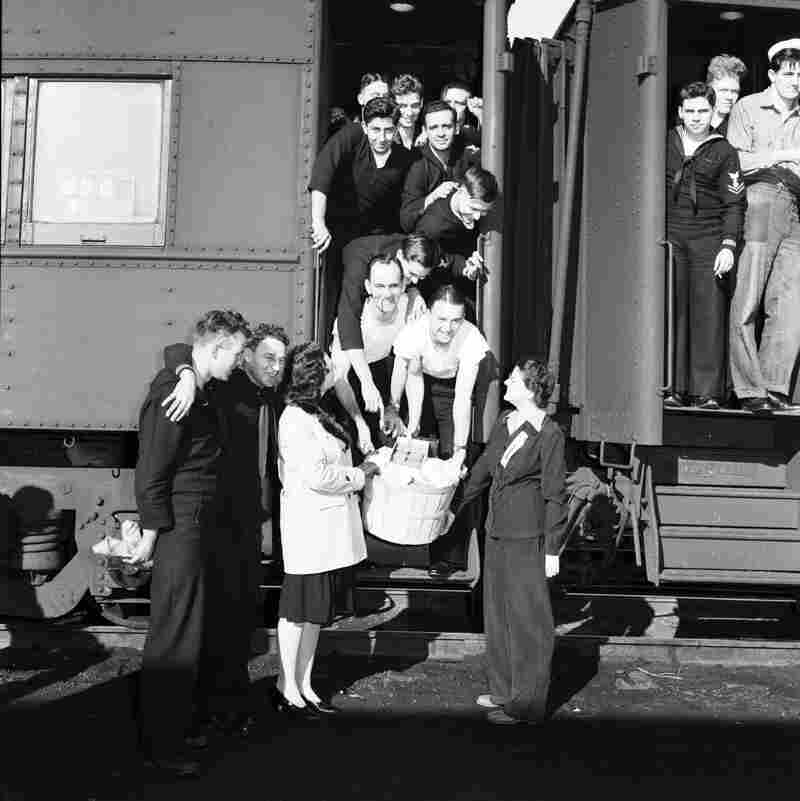 Soldiers pile into the doorway of a troop train to receive a basket from two canteen volunteers. Courtesy of the Lincoln County Historical Society hide caption 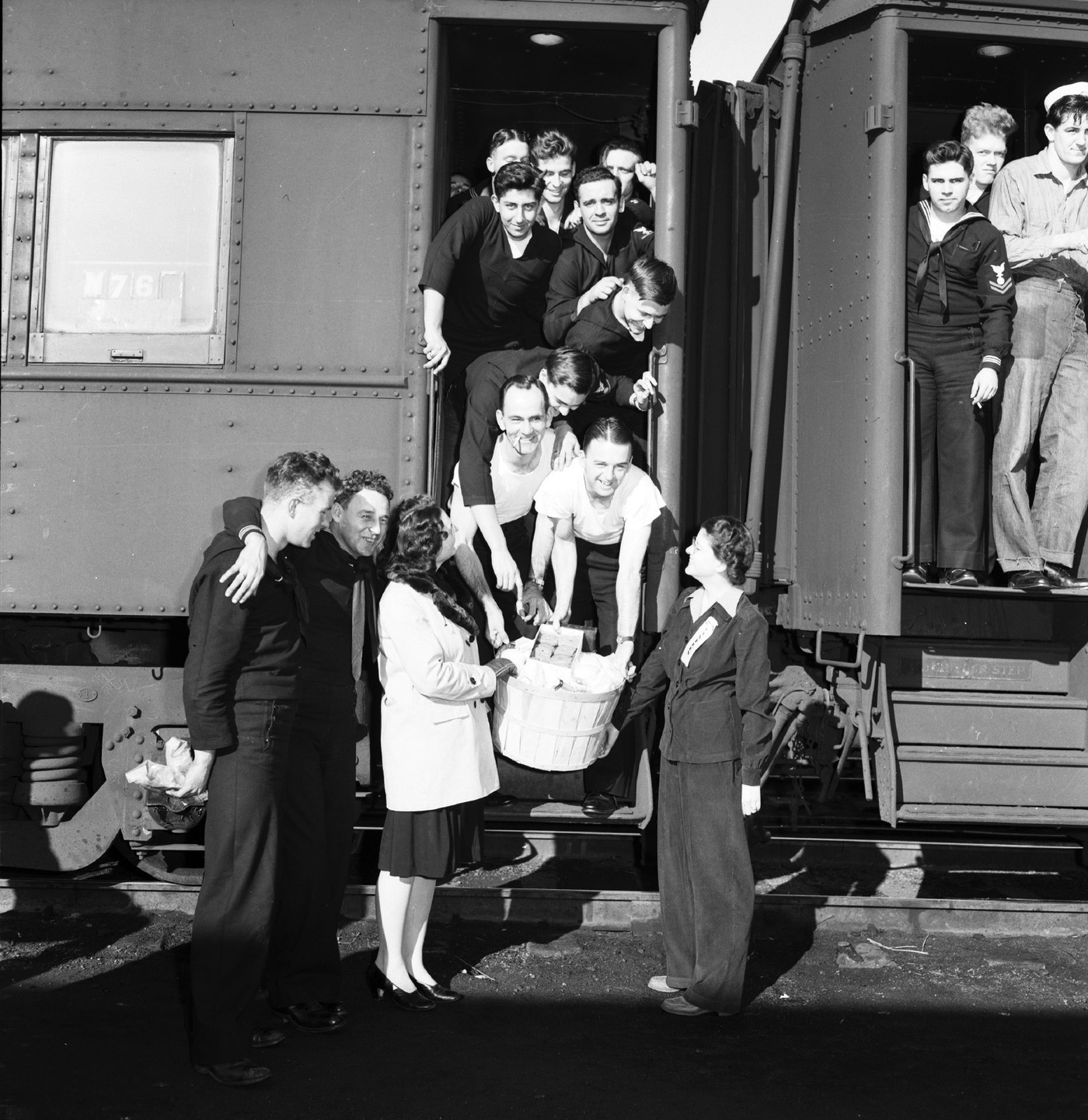 Soldiers pile into the doorway of a troop train to receive a basket from two canteen volunteers.

The quantity of food donated and the miles traveled were especially remarkable in a time of rationing. The federal Office of Price Administration issued a limited number of vouchers required for the purchase of staple items like sugar, butter, meat, coffee and gasoline.

"They used what they had," says Amber Alexander, a World War II historian at the University of Nebraska at Kearney. "They used duck eggs. They used applesauce. They used molasses in the popcorn balls" in place of sugar and corn syrup.

Some communities added another unconventional ingredient to their popcorn balls: The names and addresses of unmarried young women who were eager to correspond with the soldiers. At least two marriages resulted from popcorn-ball matches.

The women of the canteen gave little thought to how their personal stories intersected with history.

"They didn't grasp that at all at the time," says Nickie Bigley of Wayne, Nebraska. Bigley was a toddler when her mother and aunts served at the canteen while their husbands fought the war. Volunteering was deeply personal, Bigley says, bridging the gap between the women on the home front and the men overseas.

In addition to connecting families, home-front volunteerism connected rural America to the rest of the nation. Rural Midwesterners, viewed as isolated rustics in the decades between the World Wars, became exemplars of patriotism through efforts like the North Platte Canteen and a Nebraska-wide scrap-metal drive that set the standard for other states. The values of home front patriotism—resourcefulness, thrift, generosity—coalesced with an emerging Heartland identity that came to define Middle America in the 1950s. 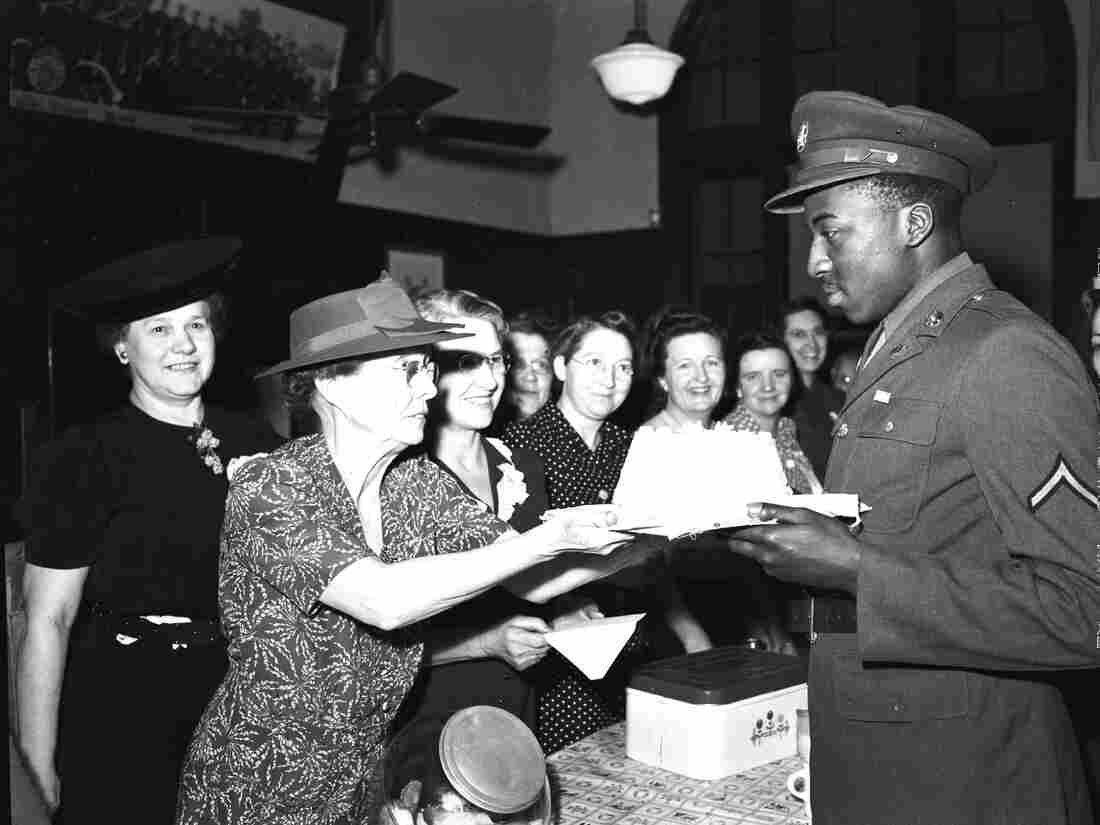 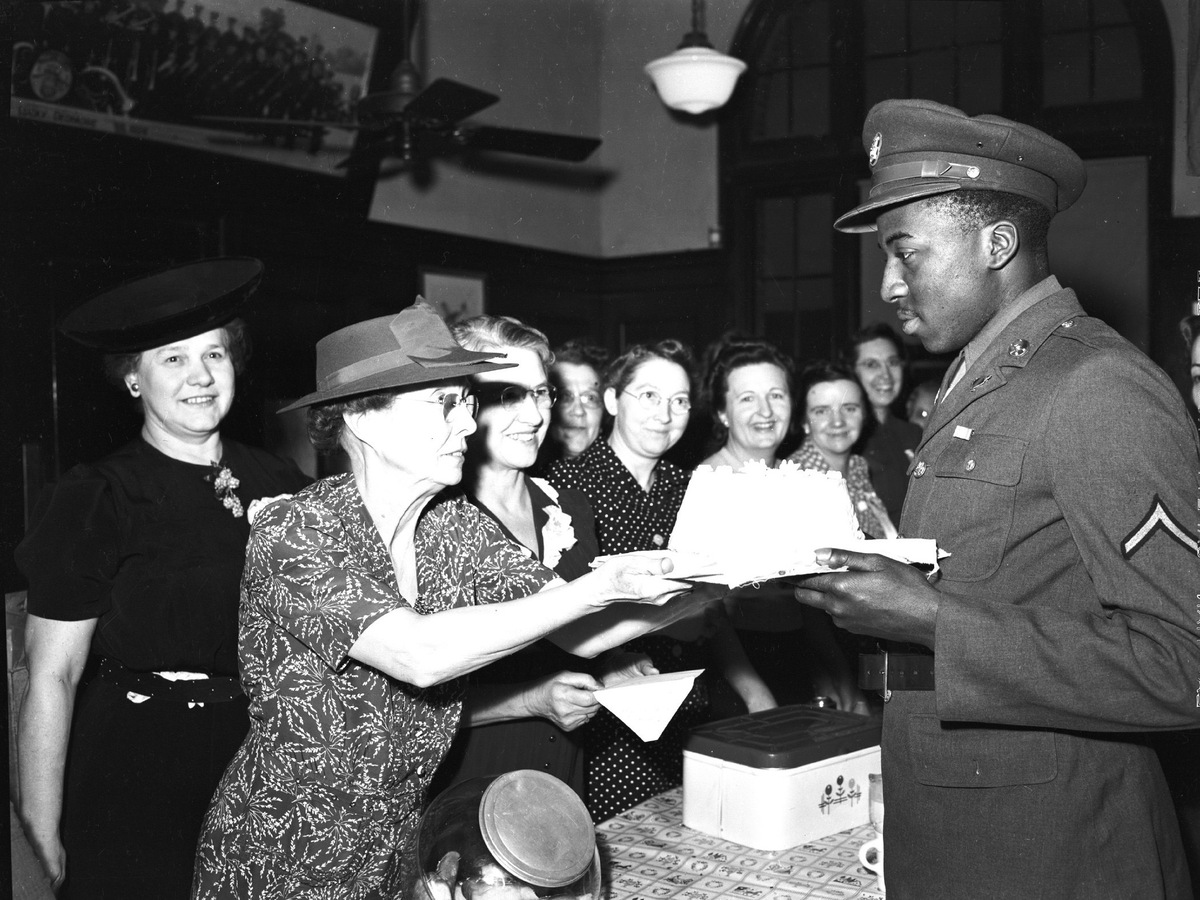 In 1973, a wrecking ball demolished North Platte's Union Pacific Railroad depot. The transformation was complete. The North Platte Canteen, like the agricultural past it embodied, could not be revisited.

The following recipes are from the North Platte Canteen Cookbook, published by the Lincoln County Historical Museum.

Combine all ingredients and cook over a double boiler until thick. Cool. Add cream or Miracle Whip until right consistency.

Sift flour with 3/4 cup of sugar 4 times. Beat whites, cream of tartar, salt, vanilla, and almond until stiff enough to hold up in soft peaks but still moist and glossy. Add remaining 3/4 cup of sugar to whites a little at a time, beating after each addition. Sift about 4 tablespoons of flour over whites. Fold in flour by fourths. Bake in ungreased tube pan at 375° for 35 min. Hang pan to cool.