Accessibility links
Blue Seal: The GI Ice Cream That Okinawans Made Their Own : The Salt Blue Seal ice cream was launched after World War II for American soldiers stationed in Okinawa, Japan. Today, it's a fusion of American and Okinawan tastes that's loved by locals and tourists alike. 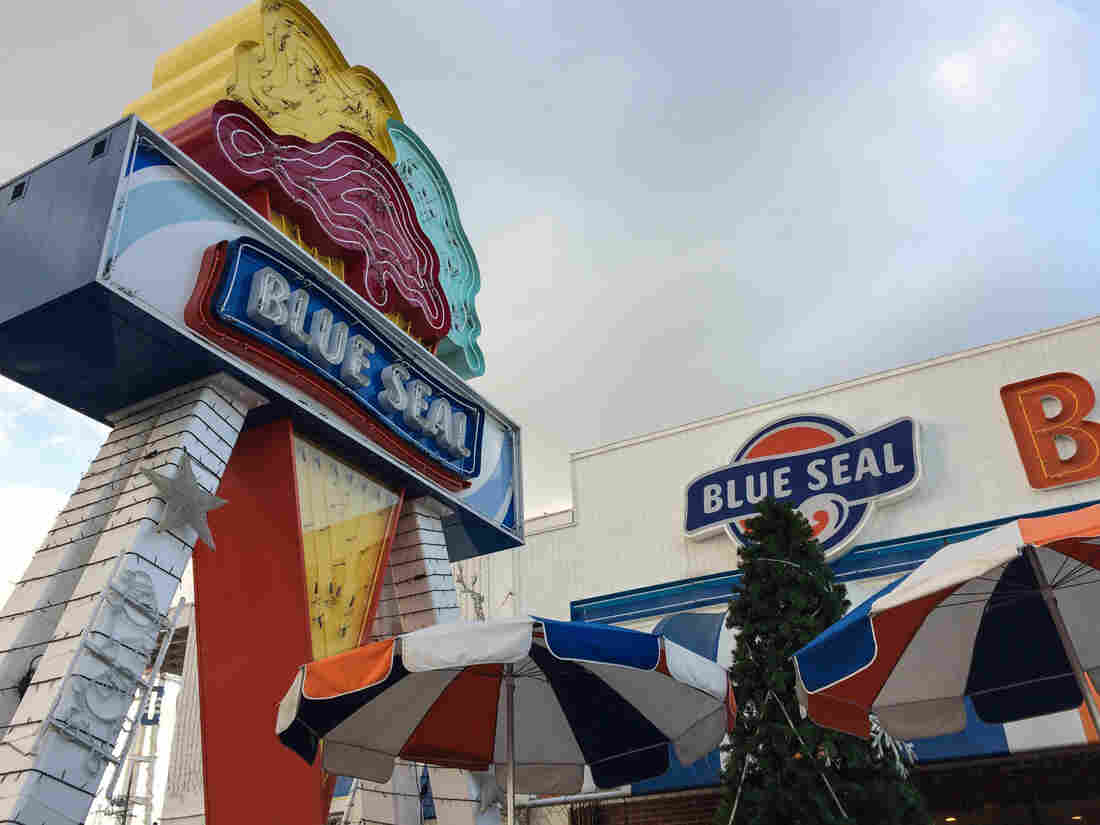 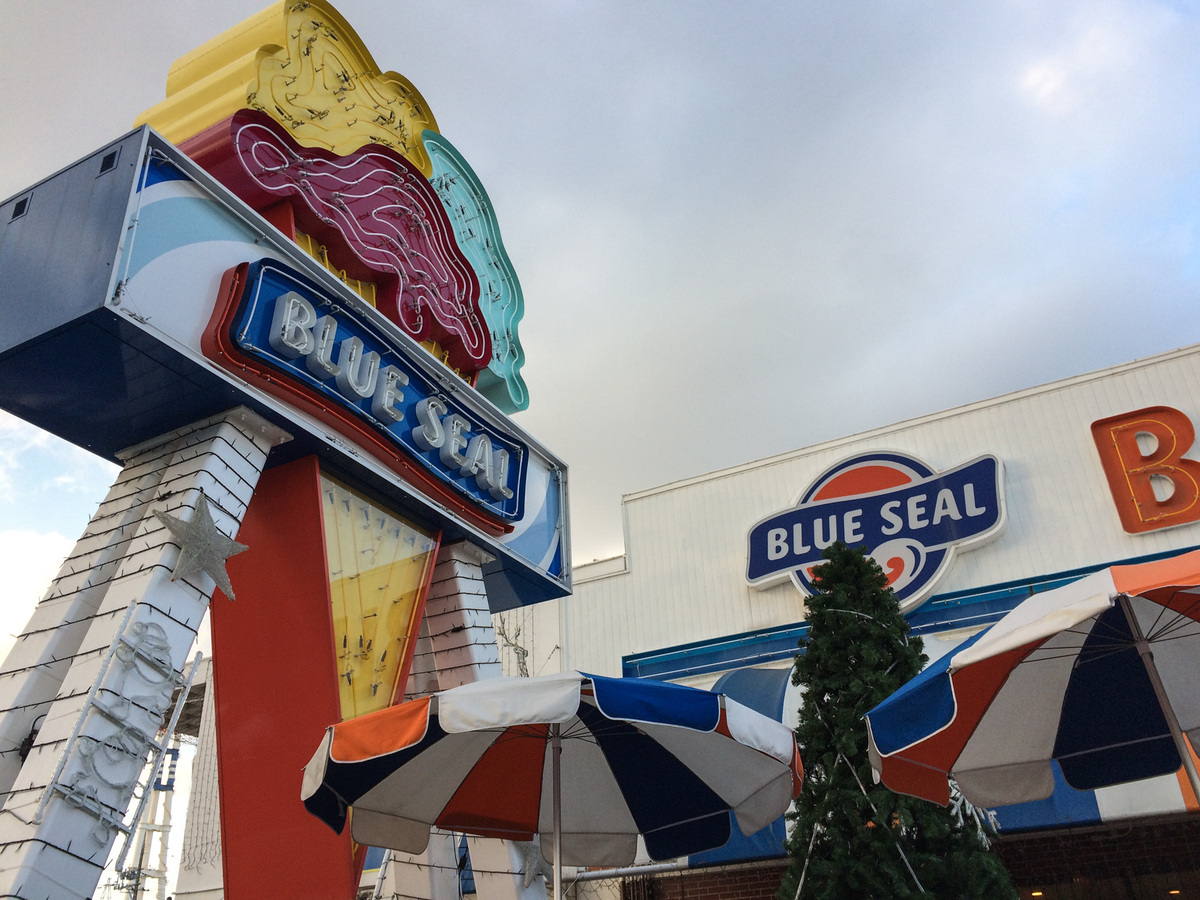 This original Blue Seal ice cream store opened its doors to Okinawans in 1963. It's now the flagship location.

I first got to taste Blue Seal ice cream 13 years ago. I was 24 years old and teaching English in a tiny mountain town called Furukawa, which means "Old River." One weekend, some Canadian friends and I flew to Okinawa, Japan's southern-most island. Once we arrived in downtown Naha, Okinawa's capital city, my friends decided to dine at a steakhouse. And as the only vegetarian in the group, I was on my own. As I wandered down Kokusai-dori, or International Street, I saw the welcoming orange and blue entrance of a Blue Seal ice cream shop.

Inside, there were rectangular tubs of bright purples and greens, almost like an Easter egg basket full of pastel-colored delights. I soon realized these were flavors I'd never tasted before: the light purple beni-imo (a slightly sweet Okinawan sweet potato) and the darker purple ube (a hearty, tropical purple yam).

I gorged on delicious scoops and somehow found comfort in these unfamiliar flavors in a shop that felt quintessentially American. I was surrounded by waffle cones, a spacious seating area, and bright lights that reminded me of after-school trips to Dairy Queen for chocolate dipped cones. That night, I ate ice cream for dinner, not an uncommon meal choice for an obsessive sweet tooth like me.

For me, then a newbie in Japan, the novelty of Blue Seal's rare, enticing Okinawan-style flavors seemed to mix perfectly with the familiarity of an ice cream parlor that brought back childhood memories. I was hooked. And during many subsequent trips to Okinawa in the coming years, when I visited the island as a journalist, I returned to the same Blue Seal shop – to indulge my obsession with its flavors and learn about the brand's unusual history. 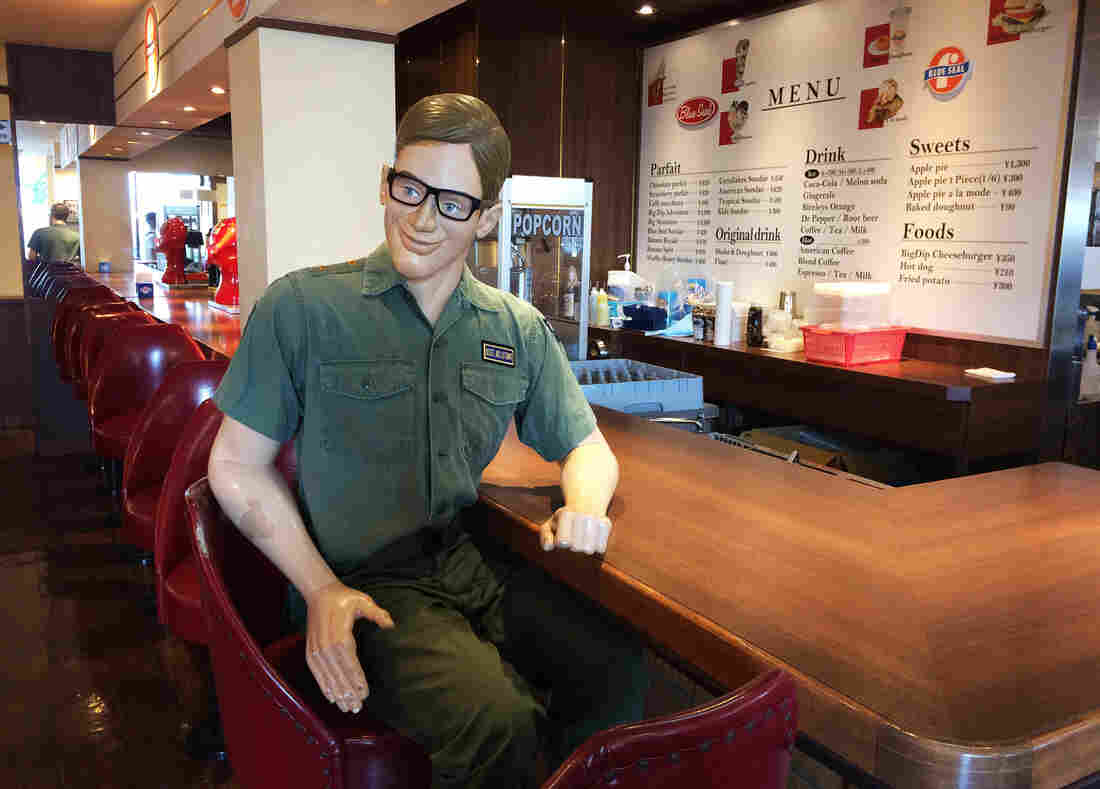 A replica of an American serviceman that sits at the counter of the diner-like Blue Seal ice cream shop. Sonia Narang for NPR hide caption

Blue Seal ice cream's slogan is "Born in America, Raised in Okinawa." It was originally created for American soldiers in the days after World War II, when the U.S. military established its first bases in Okinawa. The fledgling ice cream company opened its first factory in 1948 inside a military base, so American troops stationed there, thousands of miles from home, could enjoy dairy products, especially ice cream.

In the post-war era, Okinawans had to ration food supplies due to shortages, and ice cream was considered a rare treat that few could ever try. In those years, Blue Seal was only available to the U.S. military. Okinawan Blue Seal factory workers were allowed to eat leftovers once in a while.

It wasn't until 1963 that Blue Seal ice cream finally became available to locals. That year, the company set up operations at the site of the current flagship store, adjacent to one of the island's main highways. The brand later transferred to Okinawan ownership and over the years, added local flavors.

I first visited the flagship location on a trip to the island in 2011. It's an American-themed diner complete with large, red vinyl booths, vintage Pepsi Cola ads, and a life-size statue of a U.S. military serviceman seated at the counter. On my most recent visit this past November, I found the shop full of Okinawan mothers with young children adding toppings to their ice cream bars, couples sharing a banana split, office workers treating themselves to slices of pie à la mode, and a cluster of mainland Japanese guys with dyed hair, low-rise jeans and hip street wear (the "bad boy" look, my colleague told me). 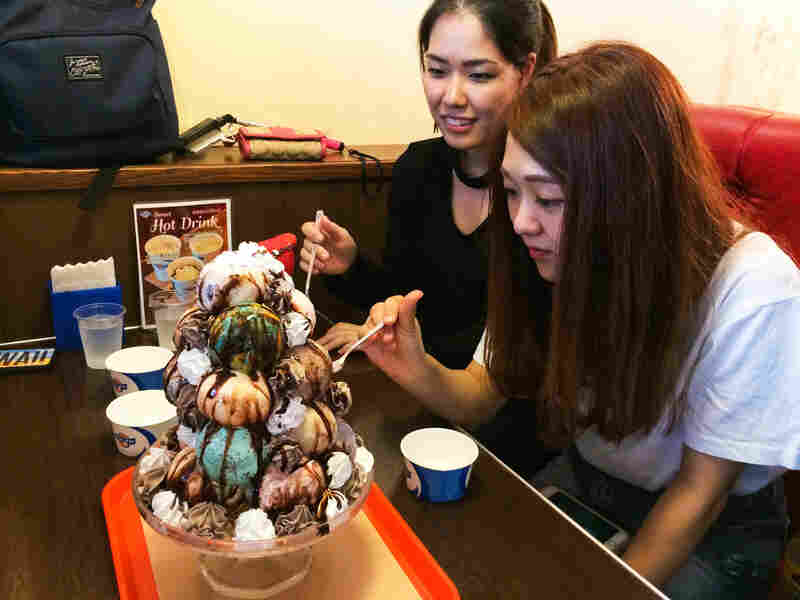 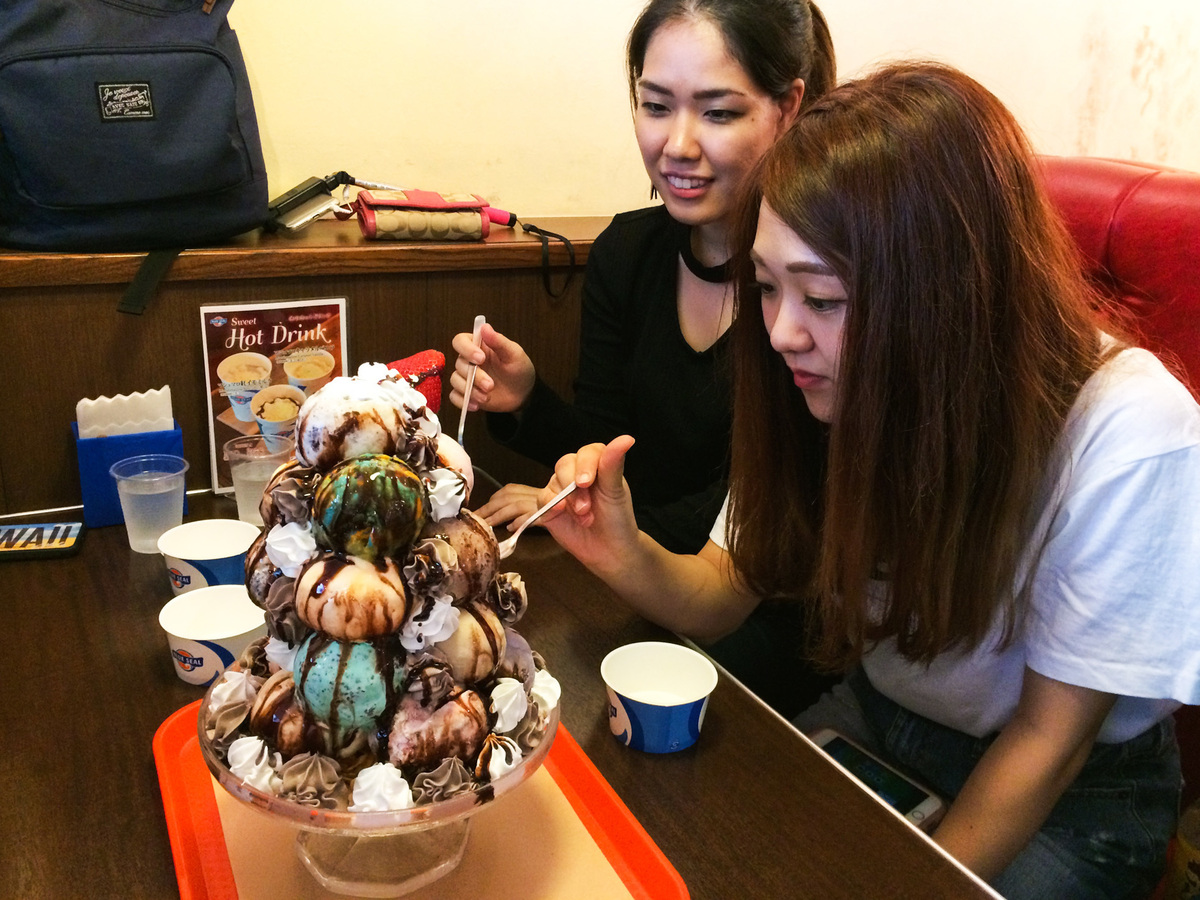 These days, while tourists from mainland Japan and abroad are drawn to the uniquely Okinawan flavors such as Shiiquasa, an Okinawan citrus fruit, and Ryukyu Royal Milk Tea, made from locally sourced tea, it's the American flavors that appeal most to locals.

Soon after my conversation with her in one of the diner's plush vinyl booths, I see a group of Okinawan teen girls in a neighboring booth, their school backpacks lined up on the ledge around them. Each one is wielding a long spoon, eagerly awaiting an ice cream treat that's about to come their way. Soon enough, a mountainous 17-scoop sundae in a glass platter arrives at their table. Armed with smart phones, they begin to Instagram away before digging in.

Turns out they're English majors at the nearby Okinawa International University, and have stopped by for an after-school ice cream outing. They tell me it's a popular place to hang out with friends and eat ice cream. And they find the American theme "cute."

"Young people in Okinawa like Blue Seal ice-cream because they have eaten and become familiar with it since they were little," explains Odo. For the people over 40, she says it brings back a sense of nostalgia.

Okinawa was under U.S. occupation up until the 1970s. American culture infused so many aspects of Okinawan life. Cars even drove on the right side of the street until the island reverted back to Japan. Despite the Okinawan movement to free themselves from U.S. control in the post-war era and ongoing anti-U.S. military base protests on the island, aspects of American culture continues to permeate life across the island.

Odo says frequent visits to the local food court in her childhood instilled in her a love of the Blue Seal ice cream parlor. "I have happy memories of seeing the ice cream being curled up by scooping," she says. "My dream when I was a little girl was to sell ice cream in a shop." Nine years ago, she got a part-time job at the Blue Seal shop in Chatan, an area famous for its sprawling American Village shopping center and always full of Okinawans on a day out. Odo was later promoted to the sales team, and most recently, the marketing department.

The fusion of American and Okinawan culture is more acceptable here, and people are familiar with it, she says. That's why some of the popular flavors mix the best of both worlds. Take, for example, the Okinawa Ta-imo Cheesecake, an ice cream that blends the locally grown ta-imo taro, a tropical root vegetable that's a cousin of the potato, with the all-American cheesecake flavor. Or the Okinawan Sea Salt Cookie, which brings together a shortbread-like cookie with locally produced salt in a rich vanilla ice cream base.

In the years since I first tried Blue Seal ice cream, the brand has become a nostalgic reminder of all my visits to Okinawa, with its beaches and year-round warm weather, similar to the southern Californian environment of my childhood. The ice cream has now become my comfort food, especially at the end of long, exhausting days. That's when I crave my favorite flavor: the beni-imo. Because it never fails to remind me that this island is a place I've come to know and belong to, even if just for the brief time it takes me to devour my scoop of purple ice cream.

Sonia Narang reported in Japan with support from the International Center for Journalists (ICFJ).