Accessibility links
Apartheid Is Long Gone, But African Food Is Still Hard To Find In Cape Town : The Salt Cape Town, South Africa, is now a global food hot spot. But the lack of restaurants serving traditional dishes of the continent speaks to larger concerns about what this post-apartheid society values. 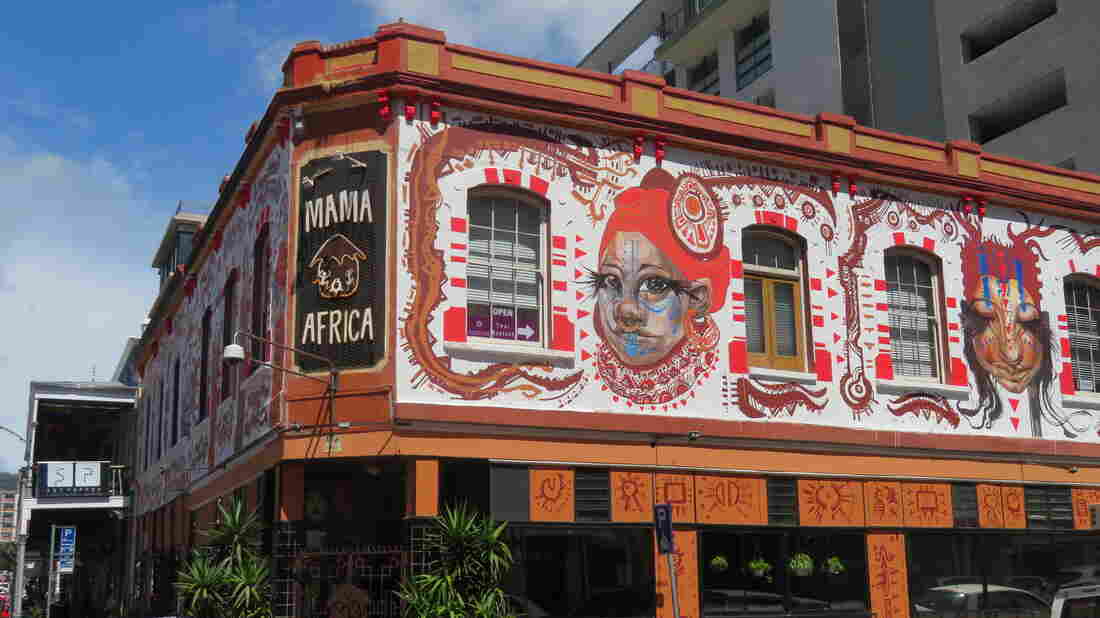 Walking along Bree St., the trendiest dining strip in downtown Cape Town, you will have no end of options: high-end Peruvian, Spanish tapas, pizzas topped with kimchi, lobster rolls, pork belly panini and a smoothies and muesli bar.

About the only thing you can't find is African food.

Cape Town is the second-largest city in South Africa, a wine and fine-dining mecca that's drawing increased international attention. But its restaurant scene is practically bereft of African food.

South Africa is home to a rich variety of cuisines, from the indigenous dishes still made at home by people of tribal descent, to the fusion foods that resulted from the arrivals not just of Europeans but also of Muslim slaves from the Far East whose descendants came to be collectively known as Cape Malay.

Little of that is reflected on restaurant menus. "Cape Malay and indeed, Cape Dutch food, are really great fusion cuisines," says Anna Trapido, an anthropologist and chef, "and it's astonishing how little of them you see in Cape Town restaurants." 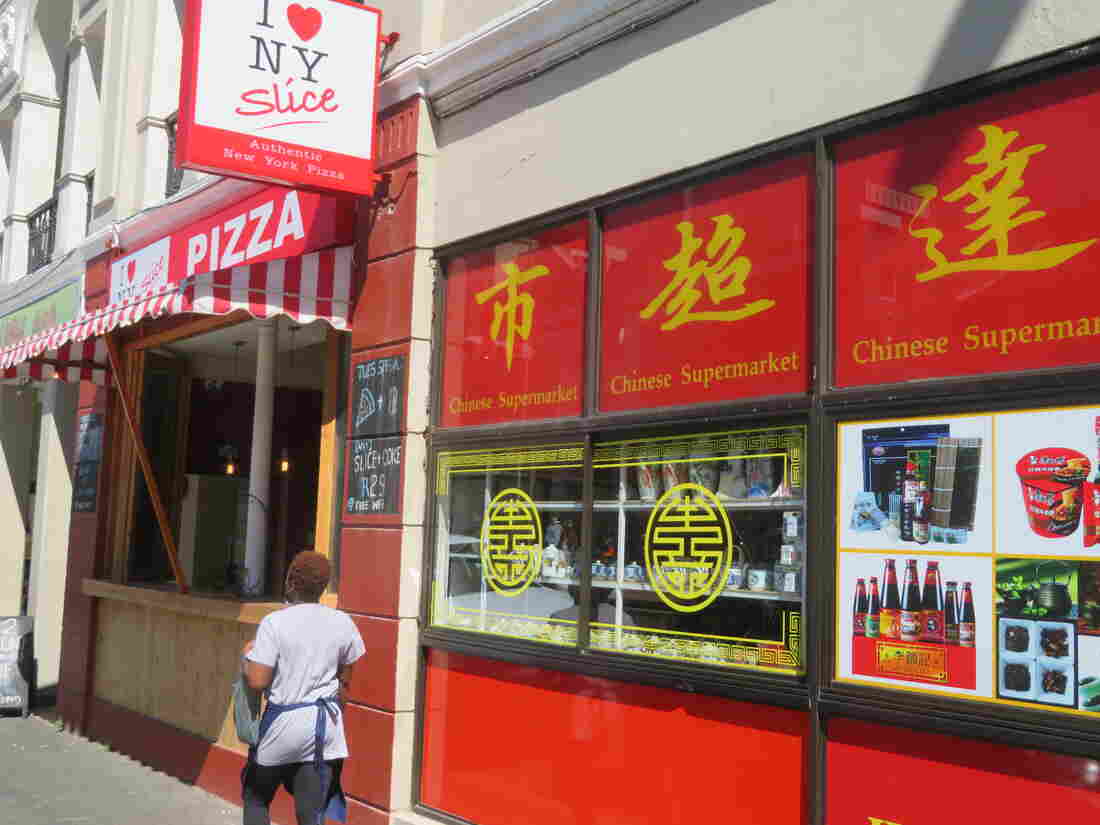 In the Cape Town suburb of Sea Point, you can pick up a slice of New York-style pizza after popping into the Hong Da Asian Supermarket. Alan Greenblatt hide caption

The 2016 edition of Eat Out, a South African dining guide, lists 137 restaurants in Cape Town. Exactly one of them serves African food.

The lack of African eating choices reflects a simple fact about Cape Town, some residents complain: It's a place that caters more to tourists than locals.

"It's not surprising how little African food influence there is in the city," says Nobhongo Gxolo, a journalist who runs a monthly supper club. "It reflects how little this is an African city."

More than 20 years after the end of apartheid, there are lively protests and ongoing debates in South Africa about how various aspects of society — universities, textbooks, the national anthem, even hairstyles — appear to embrace white or eurocentric values, while minimizing or suppressing black ones.

No one is treating restaurants as a civil rights issue, but the lack of African options speaks to the same concerns.

"How is it that you can't find an African restaurant in an African city?" says Obenewa Amponsah, CEO of the Steve Biko Foundation, a community development nonprofit. "It's really indicative of a larger challenge right now in South African society."

Cape Town's restaurant scene has gotten quite buzzy. Cape Town is now listed by Lonely Planet as one of the "world's tastiest destinations," alongside the likes of Buenos Aires and the Italian piedmont. Two area restaurants are included among TripAdvisor's 25 top fine dining spots in the world. Last year, readers of Conde Nast Traveler picked Cape Town as the world's best food city.

Yet the restaurants that are being widely hailed have menus that would offer nothing new to diners in London or Paris. Indigenous cuisines and ingredients are simply not offered to the vast majority of restaurant patrons.

You can find the occasional dish that sprung up in South Africa on a few restaurant menus — a dessert known as malva pudding, or bobotie, a curried meat casserole — but places that specialize in such food are scarce. There are grains such as sorghum and millet that are native to the Cape, but ignored by most restaurant chefs. So are dishes such as umngqusho — samp (crushed corn kernels) and sugar beans — that could be served drowned in butter and made scrumptious like risotto.

"It's absolutely bizarre that those are not reflected on Cape Town restaurant menus," says Trapido, the author of Hunger for Freedom: The Story of Food in the Life of Nelson Mandela. "It's not much more complicated than racism." 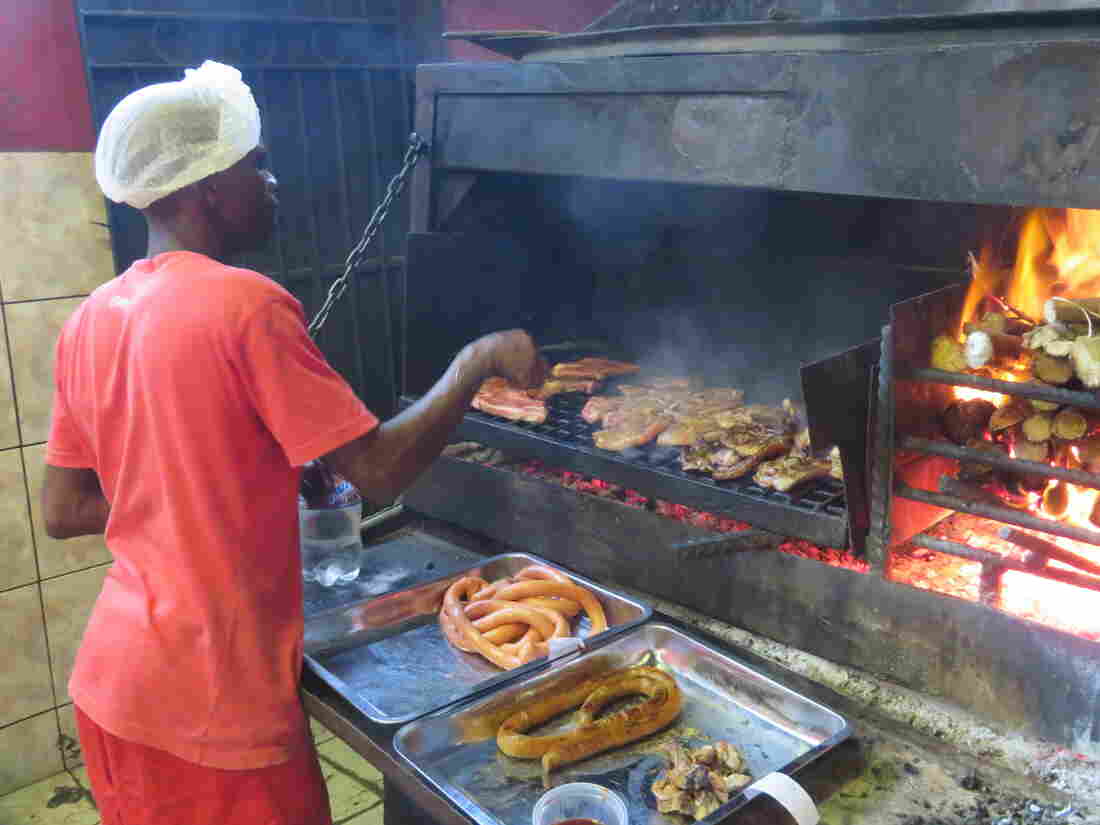 Braai is South African for barbecue. Here, meat is roasted over wood at Mzoli's, a popular butcher and grill in Gugulethu township. Alan Greenblatt hide caption

There are dozens of Italian restaurants in Cape Town for every one that serves African food. Visitors seeking "authentic" or "traditional" African dishes are often advised to head for the segregated, generally poor townships outside the city limits. "You need to get out of Cape Town to experience traditional African food," says Hilary Biller, food editor of the Sunday Times.

Imagine visiting Chicago or New York and being told you'd have to drive miles outside the city center if you want to try a hamburger or a hot dog.

In the heart of Cape Town, there are about a half-dozen restaurants that proudly announce themselves as serving dishes of the African continent, with names like Marco's African Place or the Africa Cafe. But those are restaurants that cater to tour groups, with the focus not on food but the entire experience, complete with animal skins hanging on the walls, marimba bands and waiters wearing boldly-printed shirts.

"We don't really get that many local people," says Samantha Harwood, night manager at Mama Africa. "We as a restaurant are not your African heritage food meal. It's what a tourist can handle."

In other words, no smileys — which is the local name for boiled sheep's head. As with any cuisine, some African dishes are appreciated most — or perhaps only — by the people who grew up eating them. That's why places such as Mama Africa specialize in serving large portions of meat. More adventurous patrons can try something exotic such as ostrich, but nervous eaters can stick to beefsteak and vanilla ice cream.

Gxolo recalls that when she set up a stall at the Cape Town Street Food Festival offering tripe — a standard dish of the Xhosa ethnic group — passersby reacted either with horror or glee. Some people may be "grossed out by it," she concedes.

But there are, in fact, lots of Africans who would dearly love some African food — not just Cape residents of Xhosa heritage, but the vast waves of immigrants who have come to the city from other countries such as Zimbabwe and the Democratic Republic of Congo.

When Africans eat out in Cape Town, though, their choices are pretty much limited to foreign foods, including plenty of fast-food places. The few black people who run restaurants in Cape Town see more profit in serving up sushi than sadza, a stew-and-stiff-porridge dish that's a staple across southern Africa.

"The African community in Cape Town isn't that vibrant economically," says Fanie Jason, a noted photographer who's lived in the area his entire life. "In Cape Town, there's no black dollar that you can depend upon."

And so the city remains to a large extent what it was after the first white settlers arrived in the 17th century: a refreshment station for European travelers. The area was set up by the Dutch East India Company to provide meat, produce and fresh water to sailors passing through on their way to Asia.

The vegetable gardens are preserved as the city's main downtown park, which is known as Company's Garden. There's a cafe there where you can sit at an outdoor table, surrounded by large wooden sculptures of animals.