Accessibility links
What's A Holiday Without Lutefisk And A Little White Lye? : The Salt The whitefish is famous for being repulsive — and divisive. But Scandinavian-Americans in the Midwest consider their seasonal smelly-jelly feast to be an important link to their Viking ancestors.

What's A Holiday Without Lutefisk And A Little White Lye?

What's A Holiday Without Lutefisk And A Little White Lye? 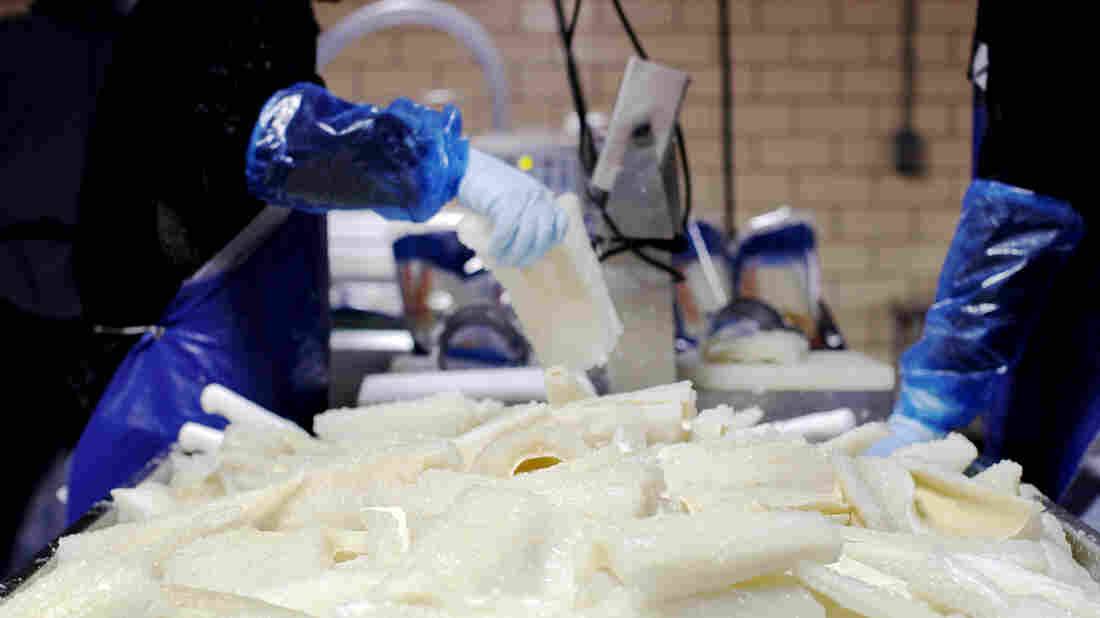 Every winter, Scandinavian-Americans gather in church basements, lodges and restaurants to feast upon the nearly see-through, white, gelatinous food known as lutefisk.

It's not an appetizing dish. Lutefisk is made from dried whitefish — usually cod— which has been rehydrated in baths of lye and cold water. The cook just has to heat and serve.

Lutefisk is famous for being terrible, and jokes about it are prevalent among Scandinavian-Americans. "Every Advent we entered the purgatory of lutefisk, a repulsive gelatinous fishlike dish that tasted of soap and gave off an odor that would gag a goat," wrote Garrison Keillor in his book Lake Wobegon Days.

But it's also strangely beloved. While most Scandinavians no longer eat lutefisk, for their American descendants — often many generations removed — it's an important link to the past.

Minnesota's Mount Olivet Lutheran Church has one of the largest congregations in the country and has been hosting an annual lutefisk dinner since 1929, when it charged only $0.29 per plate. About 1,500 people attend the dinner, which happens on the first Friday in December. In addition to the 1,200 pounds of lutefisk ordered for the occasion, there are other Scandinavian dishes served —400 pounds of ground beef get turned into meatballs, 50 pounds of lingonberries are stirred into sauce and more than 1,000 pounds of potatoes and rutabagas are cooked up just in case guest still have an appetite.

Sarah Bakken, one of the dinner's organizers, says those numbers have stayed consistent over the years. "Scandinavians are a prideful people," she explains. "They are committed to their culture and heritage and family." Sometimes this takes the form of sending kids to Norwegian dance classes or Swedish language camp. Other times, it manifests as a plateful of lutefisk.

It's not surprising that the majority of lutefisk dinners happen in Midwestern states like Minnesota or Wisconsin, which are part of the affectionately termed "Lutefisk Belt." Both have a high population of people with Scandinavian heritage. St. Olaf College, a Lutheran liberal arts school, in Northfield, Minn., has hosted a lutefisk dinner for students and guests since 1912.

"Norwegians have a very strong longing for the fjords or whatever it is," says Matthew Fogarty, executive chef at St. Olaf. "I don't know if it's genetic or just how people were raised."

Fogarty is Irish and doesn't quite understand the appeal of lutefisk — even though he serves nearly 800 pounds of it every year. When asked if he likes the stuff, Fogarty says, "There's not a lot of flavor."

However, Scandinavians have come up with a time-honored way to overcome this particular issue: sauce. Most lutefisk dinners are accompanied by one of two sauces. Norwegians traditionally pour melted butter on theirs (treating it a bit like lobster), while Swedes prefer a white sauce. 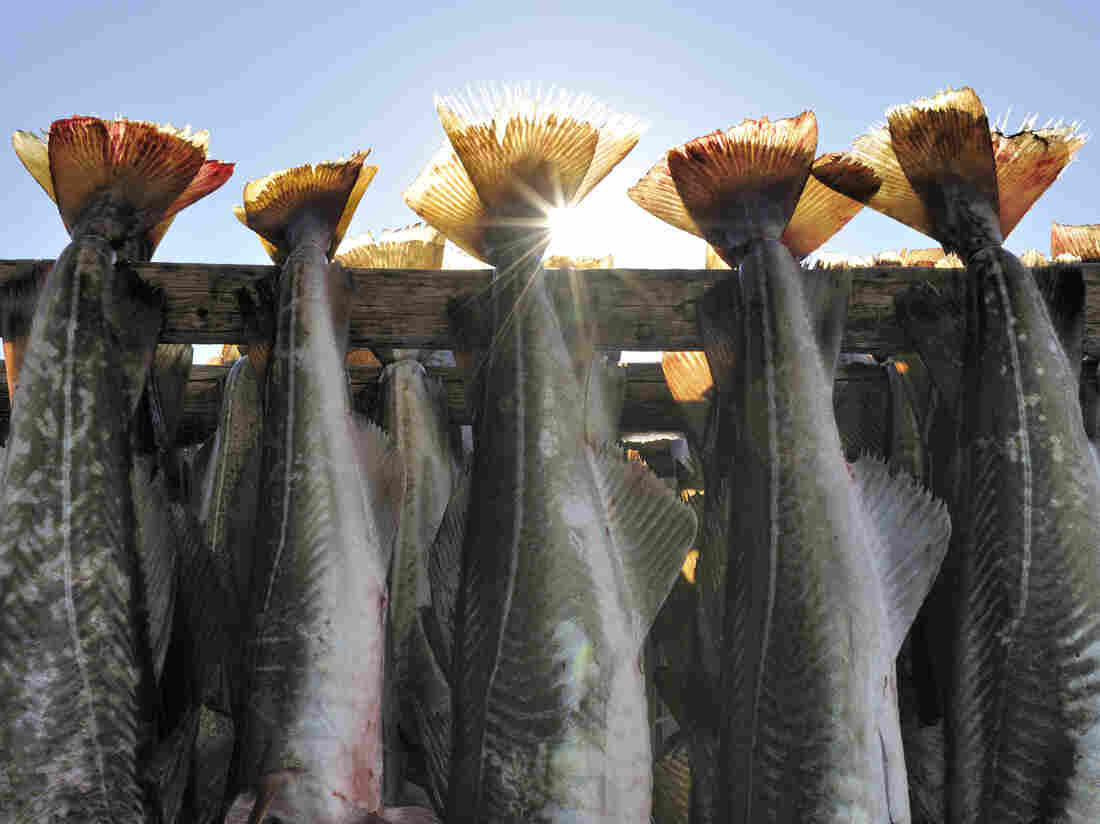 Whitefish, such as cod, was traditionally dried on outdoor racks. But now the fish is dried in sanitary rooms. Mikael Svensson /LatitudeStock/Getty Images hide caption

As Fogarty says, "One of the things that fascinated me is how much butter and cream and béchamel is used [in Scandinavian] cuisine. I've always said lutefisk is just an easier way to get butter and cream to your mouth faster."

Few to none of the annual lutefisk dinners are made from scratch. Instead, organizers turn to Olsen Fish Co., a Minneapolis-based company that makes most of its income from pickled herring. Yet every year from September through May, it gives lye baths to thousands of pounds of white fish and is the only high-volume lutefisk processor in the United States — though there are still a couple smaller manufacturers. (There's a reason why Minnesota has not one but two towns dueling for the title of "Lutefisk Capital of the U.S.".)

The company's president, Chris Dorff, says lutefisk sales have been falling. "We see a drop of 5 percent a year," he says. Most of Olsen's lutefisk business is with churches and Scandinavian or fraternal organizations. "They're sticking with it, but a lot of them are having issues getting enough volunteers [to run the dinners]," he says. "It's such an aging population of people doing it."

Many lutefisk dinners take place in rural or agricultural areas where communities have been economically pounded and are struggling to survive. As of 2015, only 14 percent of the U.S. population lived in non-metro areas, a percentage that continues to fall as young people move to cities.

In the early 2000s, Olsen's briefly introduced a lutefisk TV dinner to try to entice younger generations and new customers. Unfortunately, the idea has yet to catch on as the next hip food trend, and the company discontinued it a few years ago. When a 23-year-old Minnesotan led an endeavor to keep his local lutefisk dinner alive, it was so out of the ordinary that the state's largest paper, the Star Tribune, profiled him and his quest.

But young lutefisk-haters are missing out — modern processing methods have made lutefisk better than ever. In Norway, towns near the Arctic Circle used to dry fish by stringing them on racks outside. "When it's hanging in the elements, you're not always going to have ideal conditions," Dorff says, adding, "That's the fish they used to make lutefisk out of." It's smelly stuff. And after adding a nice long lye bath? You have a recipe for generations of jokes.

"Nowadays, they're filleted and dried in sanitary drying rooms," Dorff explains. "What takes Mother Nature six months to dry, we can do in six weeks." Ideally, he says, the smell of dried fish shouldn't make someone wonder whether or not it's rotten. "We get emails from people asking us why the lutefisk doesn't smell like it used to."

With so many strong opinions about lutefisk, perhaps the best thing to do is to follow the advice emblazoned on T-shirts at so many Scandinavian gift shops: "Try lutefisk at your own lute-risk."