Accessibility links
When Mr. Coffee Was The Must-Have Christmas Gift For Java Snobs : The Salt Few coffee aficionados are putting a Mr. Coffee machine on their wish list. But 40 years ago, it would've been at the top. The appliance revolutionized the quality and speed of home brewing. 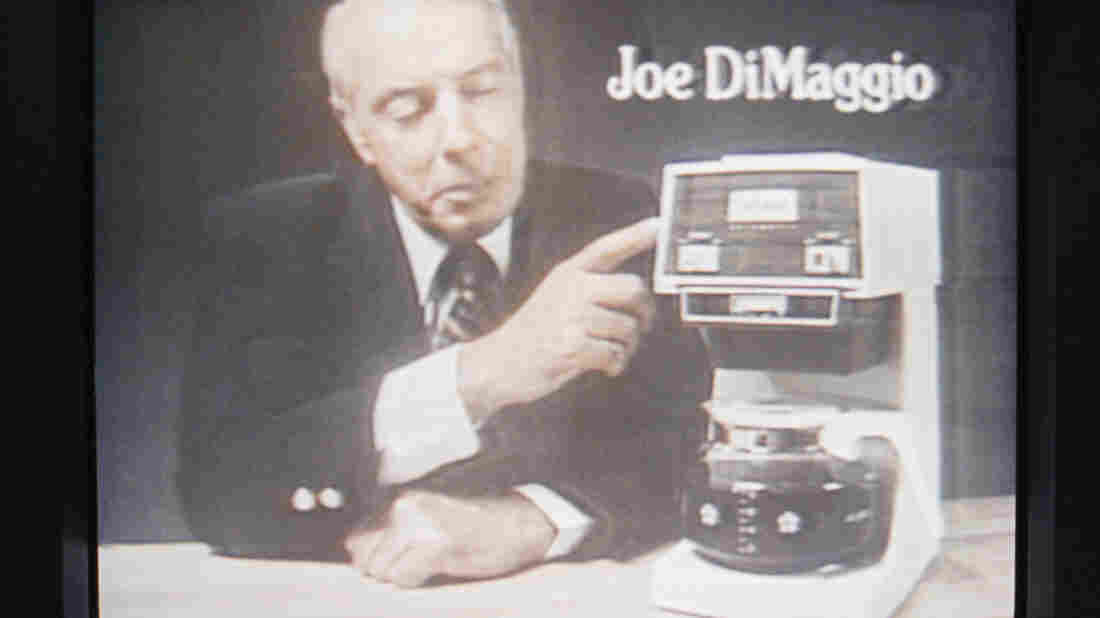 In the 1970s, Mr. Coffee became iconic, an American byword for drip brewing. By Christmas 1977, department stores were selling more than 40,000 Mr. Coffees a day. Credit for some of that success goes to the machine's longtime pitchman, former New York Yankee Joltin' Joe DiMaggio, seen here in a television commercial from 1978. Richard Drew/AP hide caption 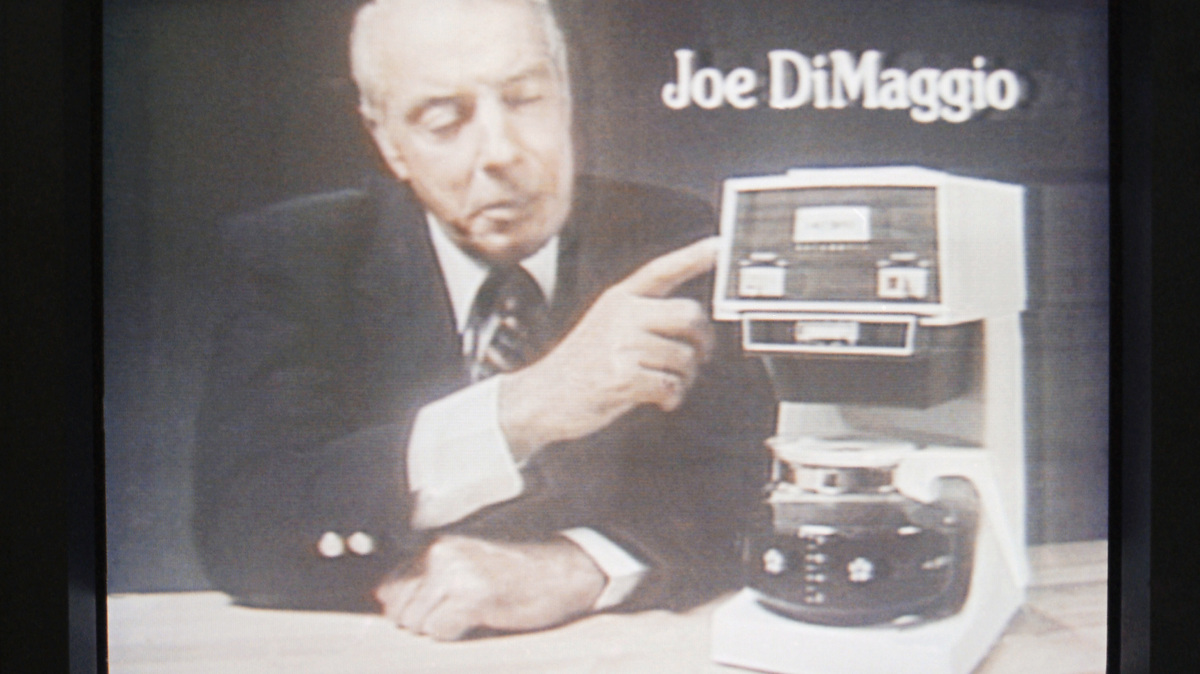 In the 1970s, Mr. Coffee became iconic, an American byword for drip brewing. By Christmas 1977, department stores were selling more than 40,000 Mr. Coffees a day. Credit for some of that success goes to the machine's longtime pitchman, former New York Yankee Joltin' Joe DiMaggio, seen here in a television commercial from 1978.

Forty years ago, the coffee habit-altering gift for those wanting to make a better cup of Joe at home would have been an automatic drip coffee machine.

Back in the 1960s, Americans were preparing coffee by the potful for breakfast, lunch and even dinner with their percolator. While the glass knob-topped pot deliciously gurgled and filled the kitchen with wonderful aromas, percolators often produced a bitter brew from cycling boiling water over and over through the grounds.

Coffee Maker Cooking: Brew Up Your Next Dinner

"It was really an outmoded way of making coffee," Vincent Marotta, a real estate developer in Cleveland told NPR's Linda Wertheimer in 2005.

In 1969, Marotta set out to build an appliance that would make better coffee by controlling the temperature and flow of the water.

"The ideal temperature of the water is 200 degrees," he explained to Forbes in 1979. "Not 212 degrees, which the percolators give you; 212 degrees gives you overextraction, so the coffee becomes bitter and astringent. Not under 200 degrees, because then there's a tendency for the coffee to come out like tea — too weak, not enough extraction."

The secret — the challenge — was to get a mechanism that would provide water at exactly 200 degrees Fahrenheit and then control its flow over the grounds for precisely the right length of time.

Marotta and his business partner Samuel Glazer hired a pair of former Westinghouse engineers to solve the problem.

Christened Mr. Coffee, the first automatic drip coffee maker for the home launched a month later. Despite its hefty price tag — the equivalent of about $230 today — it was an immediate hit. By 1975, over 1 million Mr. Coffees had been snapped up.

It was both the pour-over of its time, for how it boosted the quality of a cup, as well as the K-Cup, for speed and convenience. It took just 15 seconds for the coffee to start flowing.

Other major brands scrambled to launch their own versions. Mr. Coffee, though, was soon iconic, and became an American byword for drip brewing. In 1977, with ads running during the first commercial break of Roots, Mr. Coffee held a 50 percent share of the American coffee maker market. Revenues in 1979 were $150 million.

Credit for some of that success goes to Mr. Coffee's longtime pitchman, Joltin' Joe DiMaggio.

Largely out of the public eye since his 1951 retirement from baseball, and, because of an ulcer, not even much of a coffee drinker, DiMaggio was an inspired choice. Marotta wanted a known personality for an unknown product. Rather than a more symbolically modern figure, such as astronaut Buzz Aldrin or Olympic swimming champion Mark Spitz, Marotta sought out the paradigm of American grace and integrity. He managed to get the slugger's unlisted number in San Francisco, and after a lunch of broiled salmon, as Marotta recalled to NPR, a handshake sealed a partnership that lasted 15 years.

(DiMaggio lacked the affinity with the camera of his ex-wife, actress Marilyn Monroe, though. It reportedly took him 30 takes to make a commercial.)

"Mr. Coffee has changed the way America makes coffee," DiMaggio says in a 1975 ad. "Brews it properly, the best I've ever tasted, and brews it faster than any other coffeemaker."

If those selling features weren't quite enough reason to splurge on a machine, DiMaggio's smooth, trustworthy encouragement often closed the deal. In a 1977 Christmas commercial, DiMaggio, wearing a plaid shirt and cardigan, sits in a heavily decorated living room. "When you give Mr. Coffee for Christmas, every delicious cup will be a reminder of your thoughtfulness for years to come," he says in a fatherly manner. He takes a sip of coffee and then adds, "This Christmas, give Mr. Coffee."

By the time that commercial ran, DiMaggio was helping move more than 40,000 Mr. Coffee makers a day off department store shelves.

Some people even DiMaggio couldn't pry away from their percolator. Among them were my grandparents, who remain loyal holdouts to this day. Now in their 90s, they still brew their ritualistic morning pot in a stovetop percolator. No fancy coffee gadgets for them this Christmas, or even a belated replacement with a drip machine. If I can manage it, though, I will fill their MJB canister with my favorite Ethiopian roast. Already ground, of course.

Jeff Koehler is the author of Darjeeling. Bloomsbury will publish his new history on coffee in 2017. Follow him on Twitter @koehlercooks.