Accessibility links
Marzipan, The Sweet Taste Of The Holidays In Madrid : The Salt One legend has it that marzipan emerged during an epic 13th-century Spanish battle. Today, it is a highlight of the holiday season. And the best stuff comes from convents and small family bakeries.

Marzipan, The Sweet Taste Of The Holidays In Madrid

Marzipan, The Sweet Taste Of The Holidays In Madrid 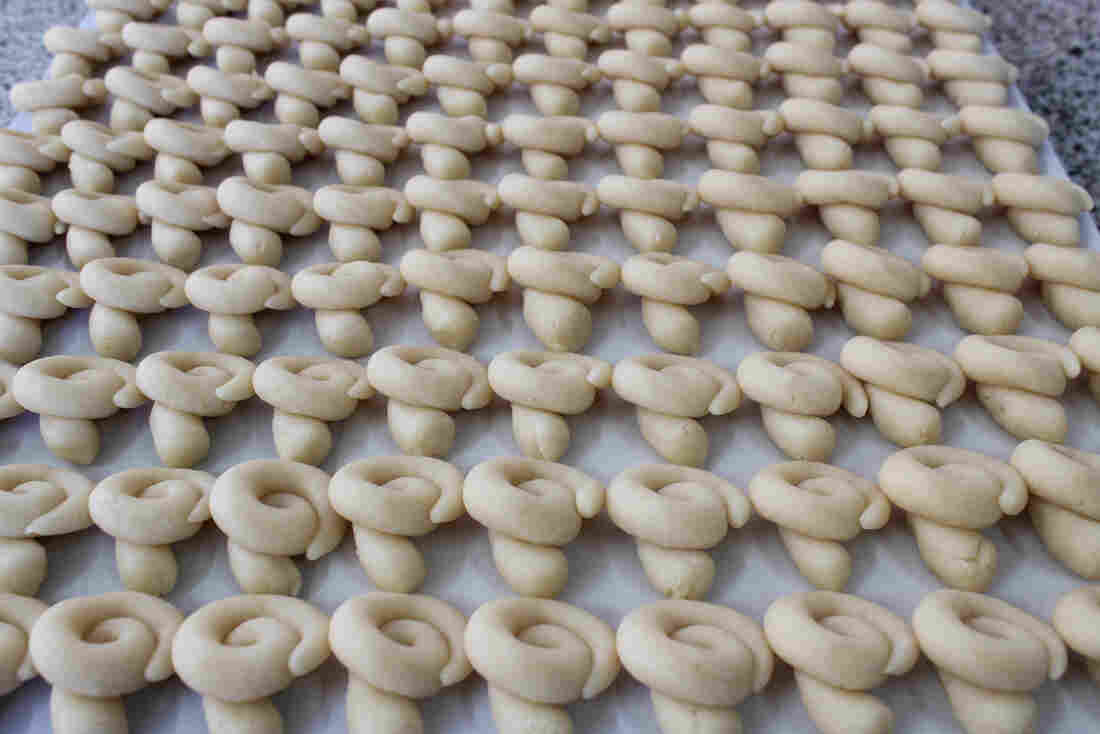 Row upon row of marzipan trumpets at the Mazapanes Manzanero bakery in San Martin de Pusa, located about 75 miles south of Madrid. Marzipan is a highlight of the Spanish holiday season, and many say the best versions are made in convents and small bakeries like this one. Margarita Gokun Silver/for NPR hide caption 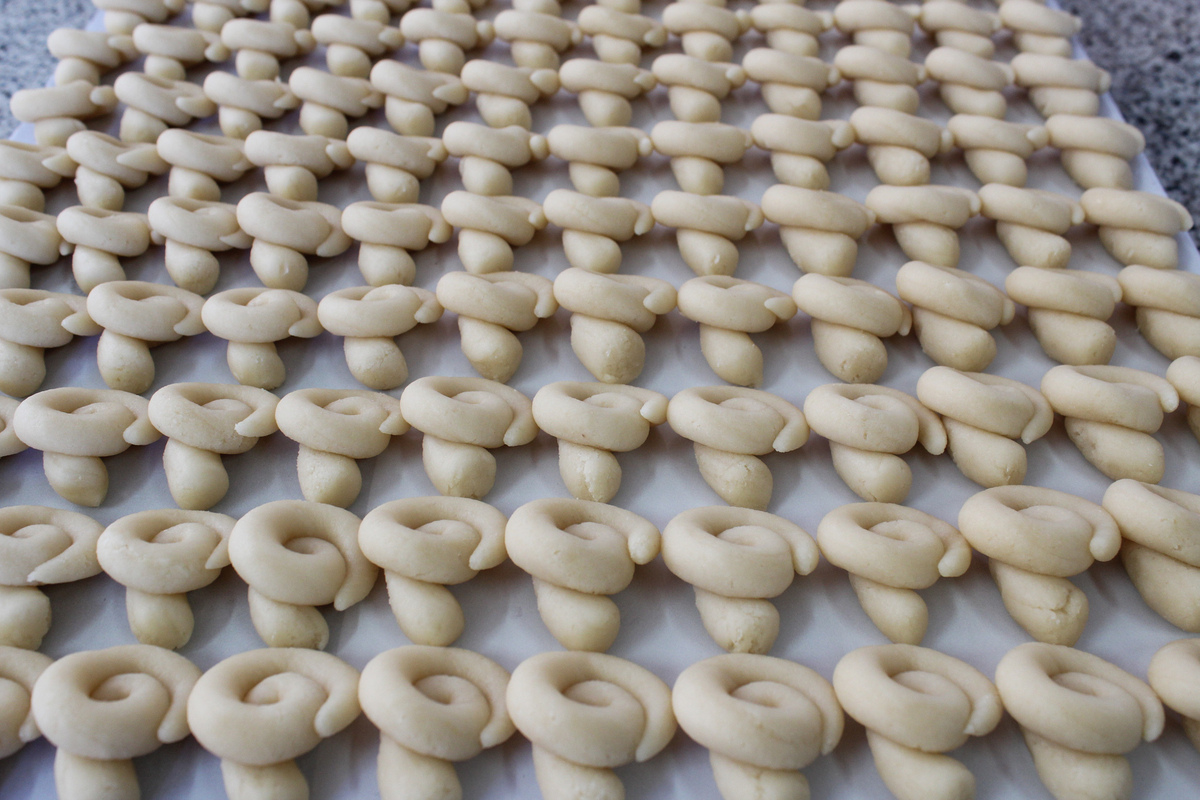 Row upon row of marzipan trumpets at the Mazapanes Manzanero bakery in San Martin de Pusa, located about 75 miles south of Madrid. Marzipan is a highlight of the Spanish holiday season, and many say the best versions are made in convents and small bakeries like this one.

There are three constants during the holiday season in Madrid: tourists ogling light-bedecked thoroughfares; supermarket aisles stuffed with seasonal treats like turrón and polvorón, the Spanish shortbread. And, everywhere, marzipan.

The best marzipan, Madrileños swear, is made by nuns in convents or in small family bakeries like Mazapanes Manzanero, located in the town of San Martin de Pusa, some 75 miles south of the capital. The bakery has been making marzipan since Juan Menor founded it at the end of the 19th century. Today it's owned by Menor's great-grandson, Santiago Manzanero Gálvez-Rojas. It's still located in the same town and, save for a couple of machines, still makes marzipan the same way. 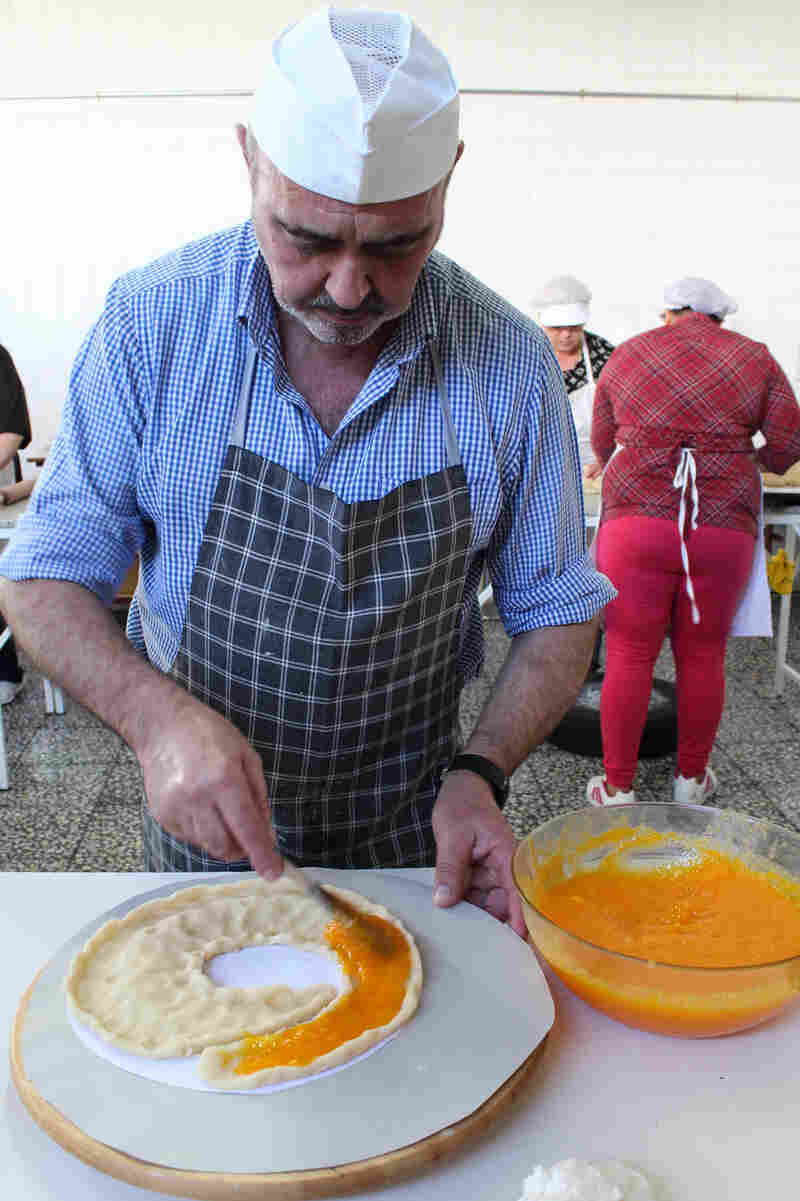 After molding marzipan into the traditional shape of anguila, or eel, Santiago Manzanero fills it with yema, egg yolk mixed with sugar. It's then baked in the same kind of wood-fired oven his great-grandfather used, and decorated by candied fruit and a piped icing of egg whites and sugar arranged on top in elaborate drawings. Margarita Gokun Silver/for NPR hide caption

"My great-grandfather used to crack and peel the almonds manually," says Manzanero. Four generations later, "we are lucky we can buy them already peeled."

Hailing from Alicante and Jijona, the two towns known for their turrónes — also an almond-based Christmas specialty — the Marcona almonds arrive into a small, two-room bakery in giant bags. There Santiago grinds them, mixes them with sugar, and passes the mixture through what looks like the drying rollers of an old washing machine. Made of stone and at least 6 inches in diameter, the rollers squeeze out dough ready to be molded into traditional marzipan shapes.

Stories about the origins of marzipan abound. Some believe it came from Persia, others speak of Sicily as the place of its birth, yet others name Toledo, Spain —San Martin de Pusa's neighbor.

The Toledo legend is probably the most picturesque. Involving a famine, a battle, and a convent, it credits the nuns of Convento de San Clemente with inventing marzipan by mixing the only ingredients they had available — almond flour, sugar and water — to stave off hunger during the Batalla de las Navas de Tolosa of 1212, one of the deciding battles in the Christian reconquest of the Iberian peninsula from Muslim conquerors.

Almudena Villegas, a food historian and member of the Real Academia de Gastronomía, the Royal Gastronomic Academy of Spain, believes that while the origins of marzipan, much like other pastries that contain almonds, cannot be pinpointed to any one place, it certainly has roots in the Mediterranean basin. "What's clear is that many cultures — going back as far as the Greek civilization — that lived around the Mediterranean mention marzipan predecessors in their recipes," she says.

Whatever its history, today marzipan is a fixture of Spain's Christmastime celebrations. "Almonds are in season when people begin to prepare for the holidays, hence their use in Christmas sweets," says Villegas. "But also, because the ingredients for marzipan — almonds and sugar — are expensive, the custom is that it's usually only enjoyed during important celebrations." 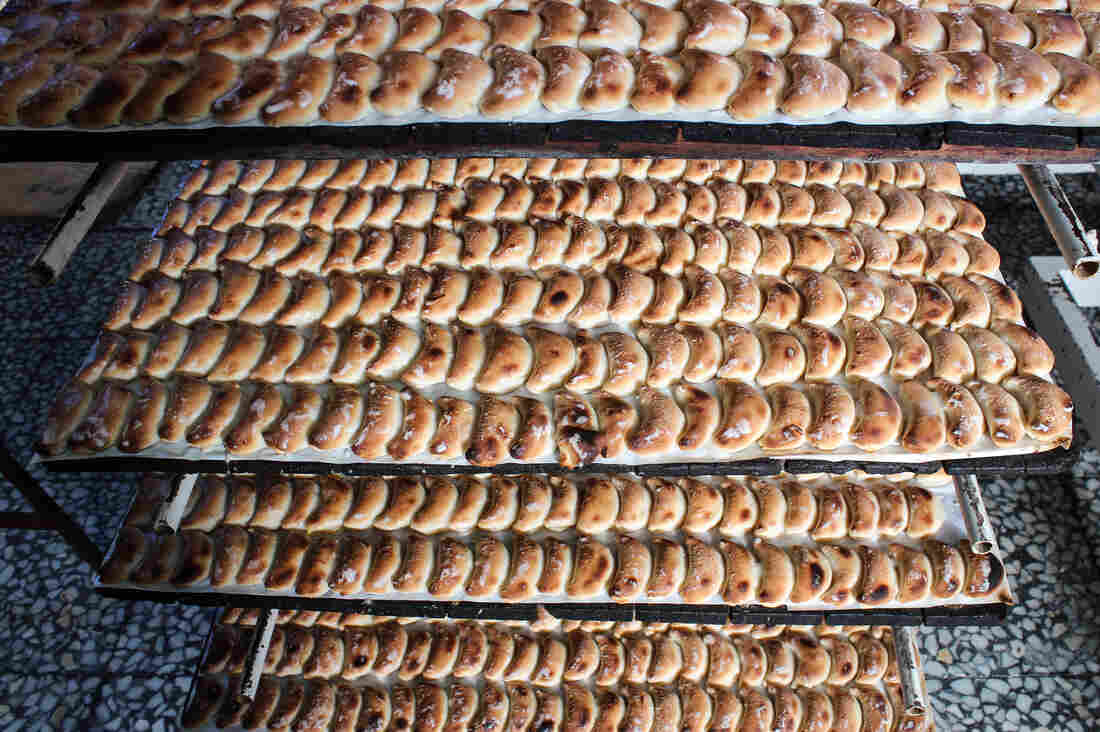 In Santiago Manzanero's bakery, marzipan's significance is well appreciated. His family has been making it for generations. "The descendants of people who bought from my great-grandfather now buy from me," says Manzanero.

His wife and business partner, María del Carmen López Hernández, proudly adds, "And we ship marzipan to as far as Germany, England and other European countries."

During the marzipan-making season, Manzanero has a team of helpers, eight in total, who stand behind long tables rolling the dough and fashioning it into figurines of trumpets, bunnies, boats and empanadillas filled with yema, egg yolk mixed with sugar. They also make larger shapes — such as the traditional anguila, the eel.

Manzanero shows me how he molds the eel and fills it with yema. It's then baked in the same kind of wood-fired oven his great-grandfather used, and decorated by candied fruit and a piped icing of egg whites and sugar arranged on top in elaborate drawings.

"King Juan Carlos I [Spain's former king] used to visit relatives around here," says Manzanero. "For his visits, they often bought our marzipan, including the anguila." Later, Manzanero's sister, María del Carmen, who is also there to help, shows me a photo in which the king [who was then still a prince], is enjoying the anguila made in their bakery.

The phrase 'fit for a king' isn't just a saying in Mazapanes Manzanero — it's part of its history.