Accessibility links
In Sun-Starved Sweden, Bright Yellow Saffron Spices Up Winter : The Salt So how did these prized threads from the crocus flower end up lacing through dark northern winters? It's a story of high-value seasonings, Sicilian saints and pagan rituals. 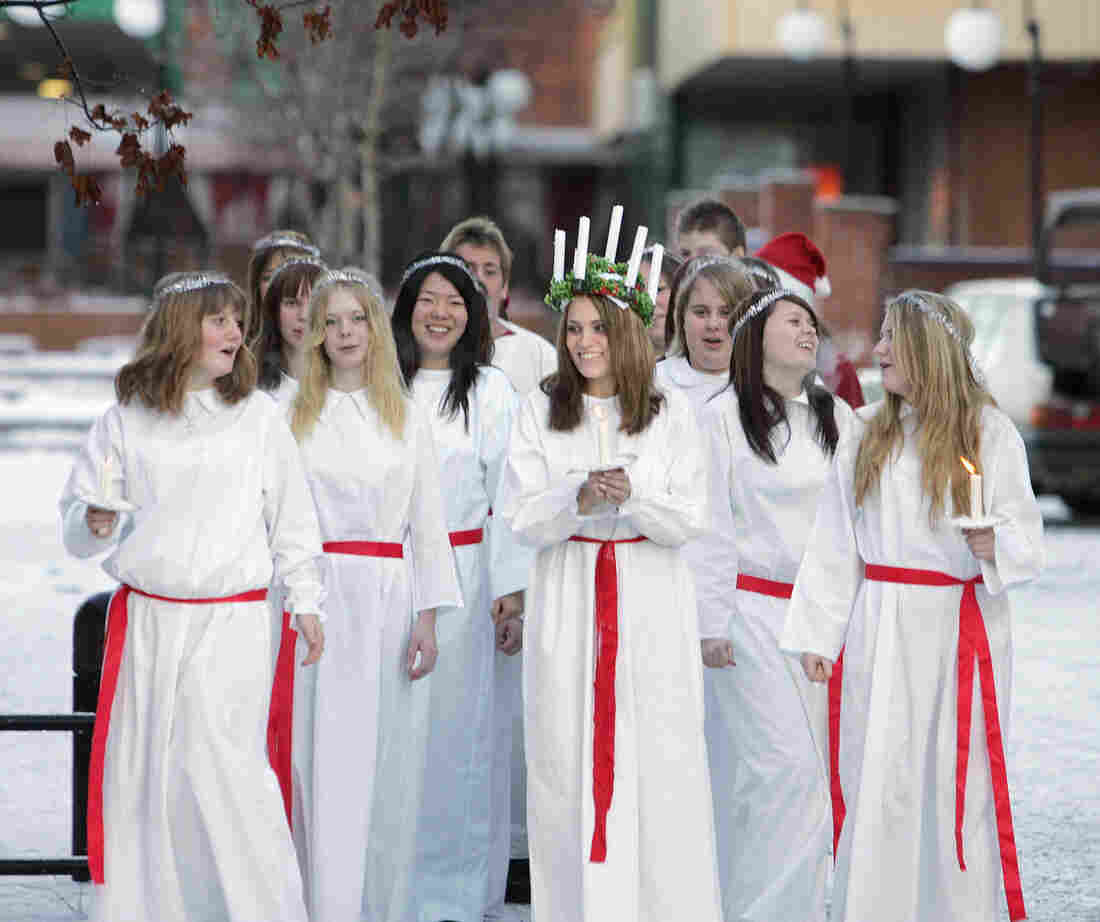 On Santa Lucia Day in Sweden, it's tradition to dress as the Sicilian saint and serve coffee and lussebullar (saffron buns) in her honor. Sven Nackstrand/AFP/Getty Images hide caption 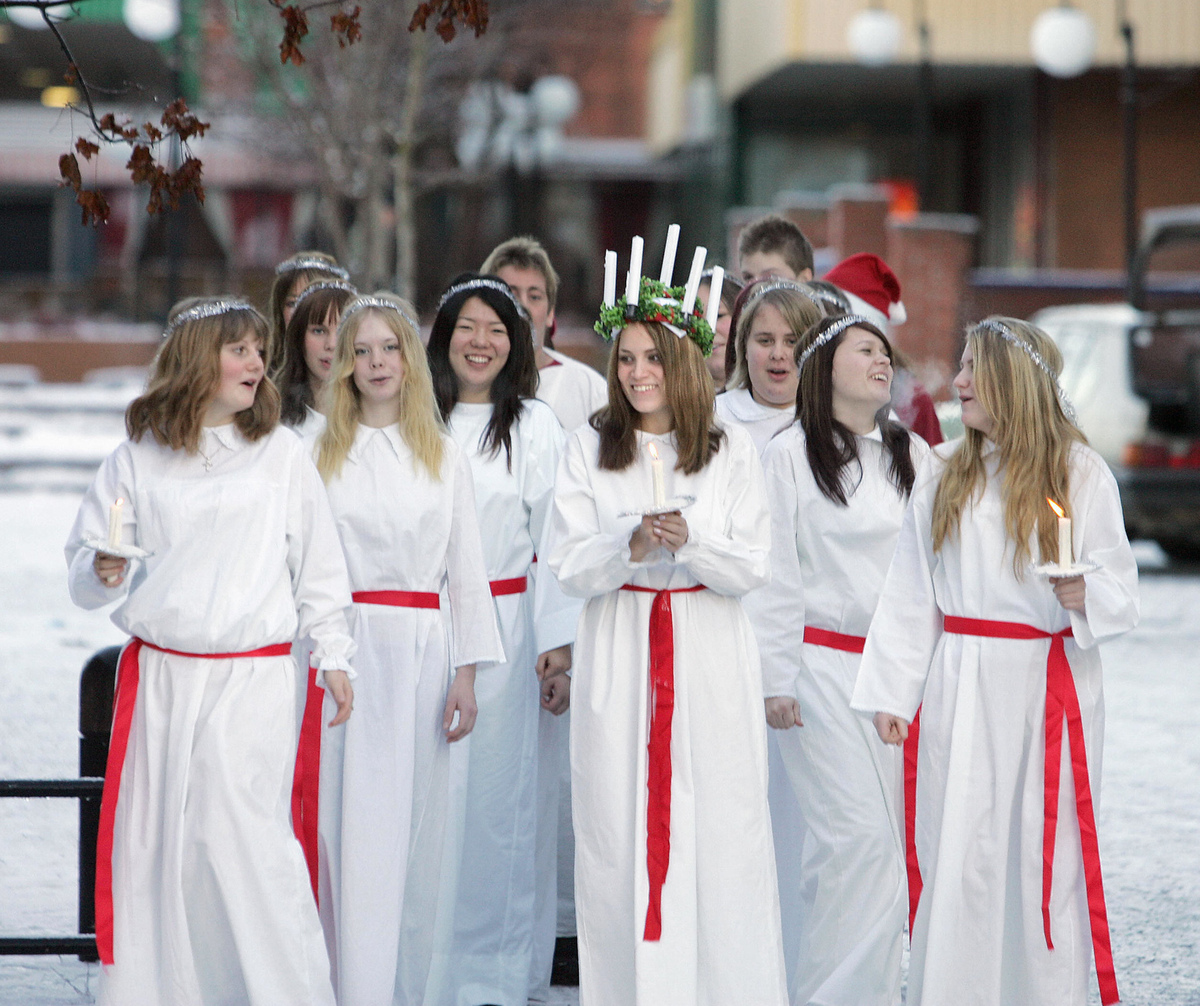 On Santa Lucia Day in Sweden, it's tradition to dress as the Sicilian saint and serve coffee and lussebullar (saffron buns) in her honor.

For many Americans, Christmas-time baking is filled with the rich, familiar scents of nutmeg, cinnamon and cloves. But in Sweden, there's another spice that enters the December pantry pantheon — saffron.

"Saffron buns are an essential part of the Swedish julbak, the "Christmas baking" that happens this time of year," explains Anna Brones, who wrote a book about fika, the revered Swedish coffee-break-with-baked-good hospitality tradition. But in December, instead of the usual cinnamon and cardamom, enriched doughs get a dose of saffron. "The bright yellow buns are twisted into various shapes — most commonly the 'S' — and then decorated with currants."

So how did this sunny spice end up lacing through dark northern winters? It's a story of high-value seasonings, Sicilian saints and pagan rituals. Really.

First, the saffron itself. "The oldest notification of its use in Sweden is from a funeral dinner in 1327, 25 years before the big Black death," explains Richard Tellström, a professor of food culture and history in Stockholm.

True, the valuable spice — hand-picked from the flowers of a particular type of crocus — doesn't exactly flourish in Scandinavia's cool climate. But as professor Darra Goldstein explains in her cookbook Fire and Ice: Classic Nordic Cooking, Scandinavia has a long history in the global spice trade. "This wealthy trade center was just one point on a northern 'Silk Road' that stretched from Russia to the Middle East, to Constantinople, Jerusalem, and Baghdad..... Salt was imported from the Mediterranean, rye from Russia, spices from the Arab lands and China. Wealthy Swedes developed a taste for saffron, cinnamon, and cloves."

While cinnamon makes its way into everyday fika baking, saffron is reserved to enrich buns (lussebullar) in honor of Santa Lucia Day. The exact history of saffron's use for this has yet to be found, but scholars point to two likely reasons — the special-occasion-only high value of the spice, and its bright yellow color. Both of which have good reason to be associated with Lucia, whose name can mean "light." 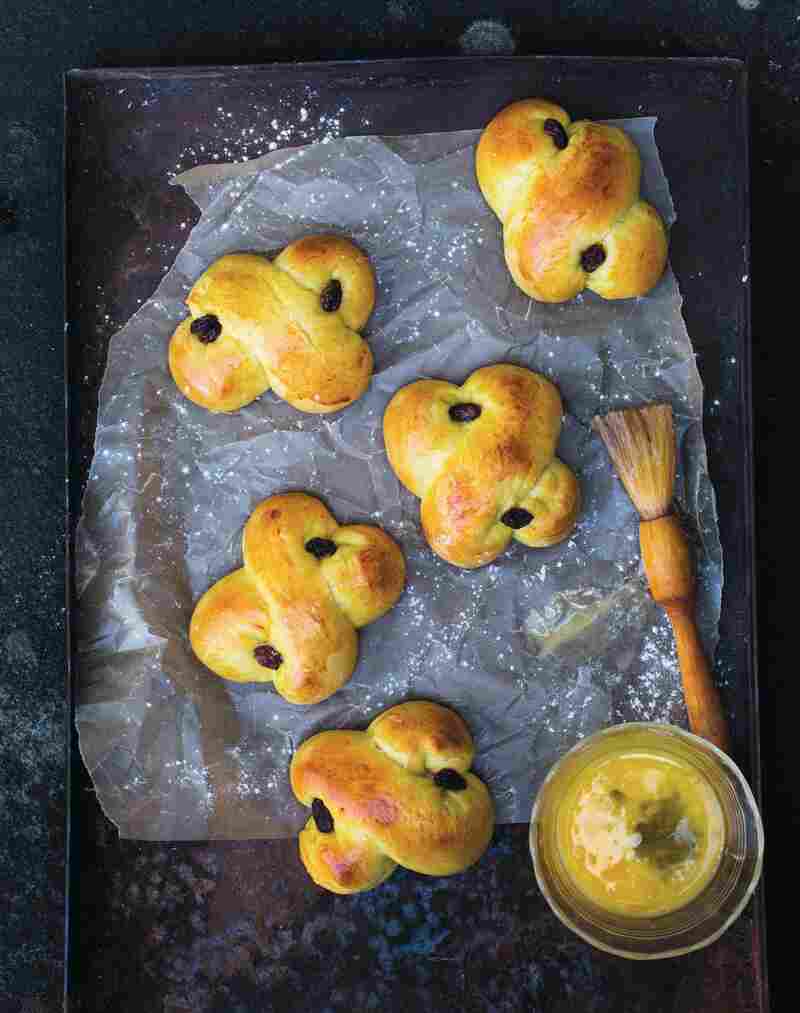 In December, saffron buns are baked into many different symbolic shapes that have roots in both Christian and pagan practices. Stefan Wettainen hide caption 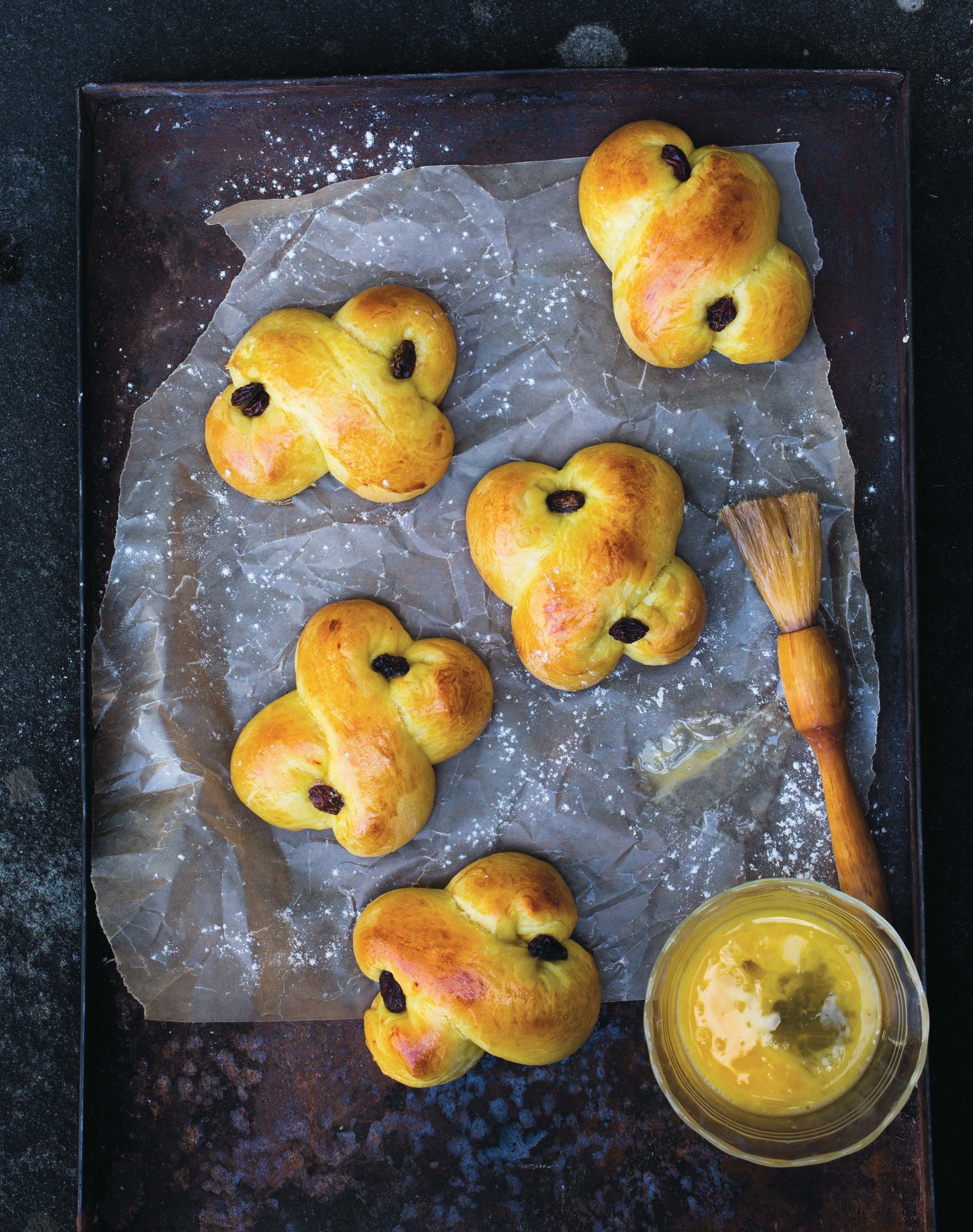 In December, saffron buns are baked into many different symbolic shapes that have roots in both Christian and pagan practices.

Santa Lucia — aka Saint Lucy — was an early Christian martyr, tortured for her faith. And, surprisingly, she made her way from sunny Sicily to chilly Scandinavia. "There was a legend in Sweden that Santa Lucia appeared as an apparition in the 17th century, bringing food to a part of the country that was undergoing a great famine," says Bruce Karstadt, head of the American Swedish Institute.

"These days, every school, church and community organization has a Lucia celebration," he says. "Someone dresses as Lucia and serves coffee and saffron bullar (buns)."

Dressing as Lucia pays homage to the saint's origins, with a white gown (for purity), a red sash (for martyrdom), and a crown of candles (for the light with which she is associated). But according to Joelle Colville-Hanson, director for the Evangelical Mission at Evangelical Lutheran Church in America, Sweden's embrace of Lucia might be about more than apparitions and Catholic saints.

"Basically the missionaries brought her to pagan Sweden in the early Middle Ages... I think she plays a similar role in evangelizing pagan Scandinavians as the virgin of Guadalupe in Mexico," Colville-Hanson says. Just as Guadalupe swept older polytheistic practices into those of Christians, Lucia taps into much older pre-Christian rites. And the feast of Saint Lucia — December 13th — is of great significance to the pagan world.

"Until the Gregorian calendar reform in the 16th century, December 13th was the longest night of the year, and like Halloween, it was a dangerous time, when unclean spirits were about," writes Darra Goldstein in Fire and Ice. "To keep them at bay, young people roamed noisily from house to house, caroling and mumming [performing little skits] in exchange for symbolically shaped buns and other foods. Their commotions were also meant to rouse the sun, to awaken it from the year's greatest darkness."

By grafting a Christian saint onto the pagan holiday, the old practices could be co-opted into the new. And instead of dark spirits — in a place that gets plenty dark during the depths of winter — there's a woman in a white dress. A ring of candles (and, nowadays, electric ones at that) have replaced those big pagan bonfires. Nobody is trading songs or tricks for buns anymore, but there are buns nonetheless. And they're richly flavored and colored with precious saffron — as yellow as the sun that the Swedes are missing during these cold midwinter nights.

Lussebullar can be formed into many shapes, some recalling Christian symbols, others heathen. The most traditional are lussekatter, or "Lucia's Cats," which with their raisins resemble two eyes on a golden background—not unlike those on St. Lucia's platter. The buns can also be molded as figure eights, crowns, plaited wreaths, hearts, sheaves, and "golden wagons" that recall pagan solar wheels, while buns shaped as priest's locks, Christmas stars, crosses, and church doors take their inspiration from the Church rather than from nature. No matter the form, these luminous buns will add a bright touch to your table.

In a small saucepan, combine the milk and butter over medium-low heat, stirring until the butter melts. Remove immediately from the heat and stir in the saffron. Set aside to cool to lukewarm.

Meanwhile, in a large bowl, stir the yeast into the lukewarm water and let proof until bubbles appear, about 10 minutes. When the milk is lukewarm, stir it into the yeast, along with the sugar, egg, salt and 4 cups of the flour, adding as much of the remaining flour as needed to make a soft dough—it will still be slightly sticky.

Turn the dough out onto a floured surface and knead until it is smooth and elastic, about 10 minutes, adding as little extra flour as possible. Transfer the dough to a large, lightly greased bowl and turn it to coat the top. Cover and let rise in a warm place until doubled in bulk, 1.5 to 2 hours.

Line two baking sheets with parchment paper. Punch down the dough. Divide it into 18 pieces, and then divide each piece in half. Roll each half between your palms into a strand that's about 4 inches long. To make Lucia's Cats, place 2 strands together lengthwise, then turn each end in toward the center to make 4 coils. (Alternatively, you can make a simple S shape by coiling the ends of each strand in opposite directions.) For golden wagons, lay one strand over the other to form an X, then turn the 4 ends toward the center to form coils, as for Lucia's Cats. Transfer each bun to a baking sheet and press a raisin firmly into the centers of the coils. Repeat with the remaining dough. Cover the buns and let rise in a warm place until puffy, 30 to 40 minutes.

Preheat the oven to 400°F. Brush the buns with the beaten egg. Bake until golden, about 15 minutes.

A previous version of the story misspelled Bruce Karstadt's last name as Kardadt.