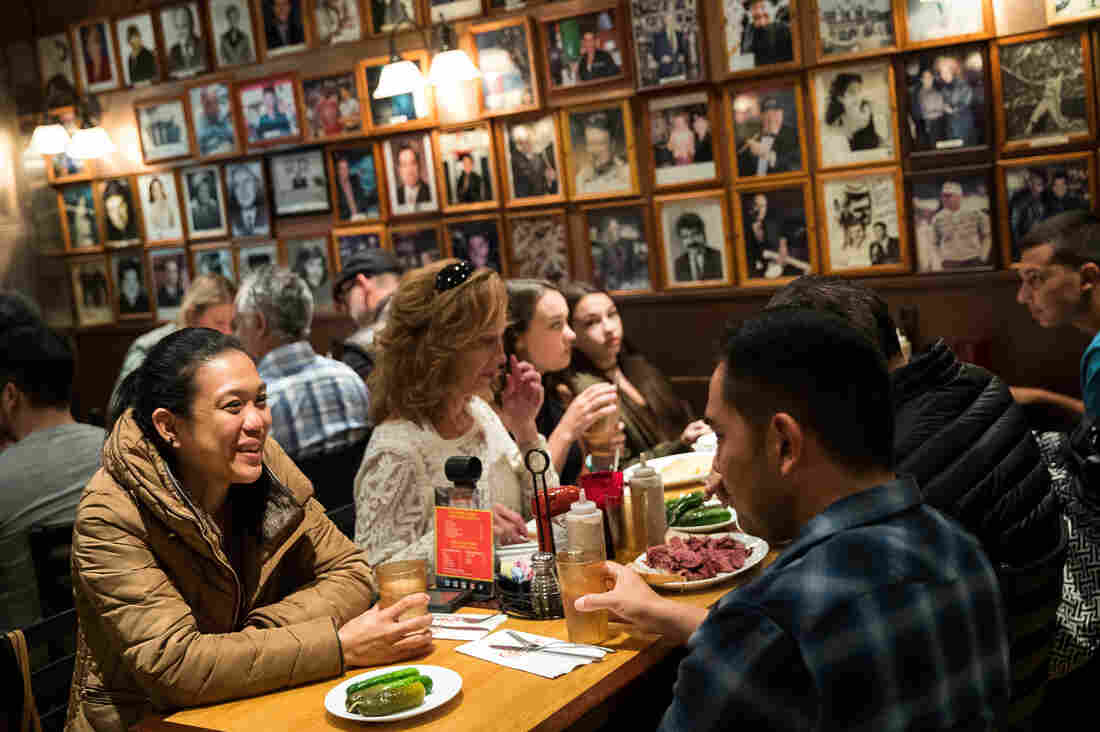 Customers dine at Carnegie Deli in New York City. The iconic deli, known for its large pastrami and corned beef sandwiches, announced it will close at the end of the year. Drew Angerer/Getty Images hide caption 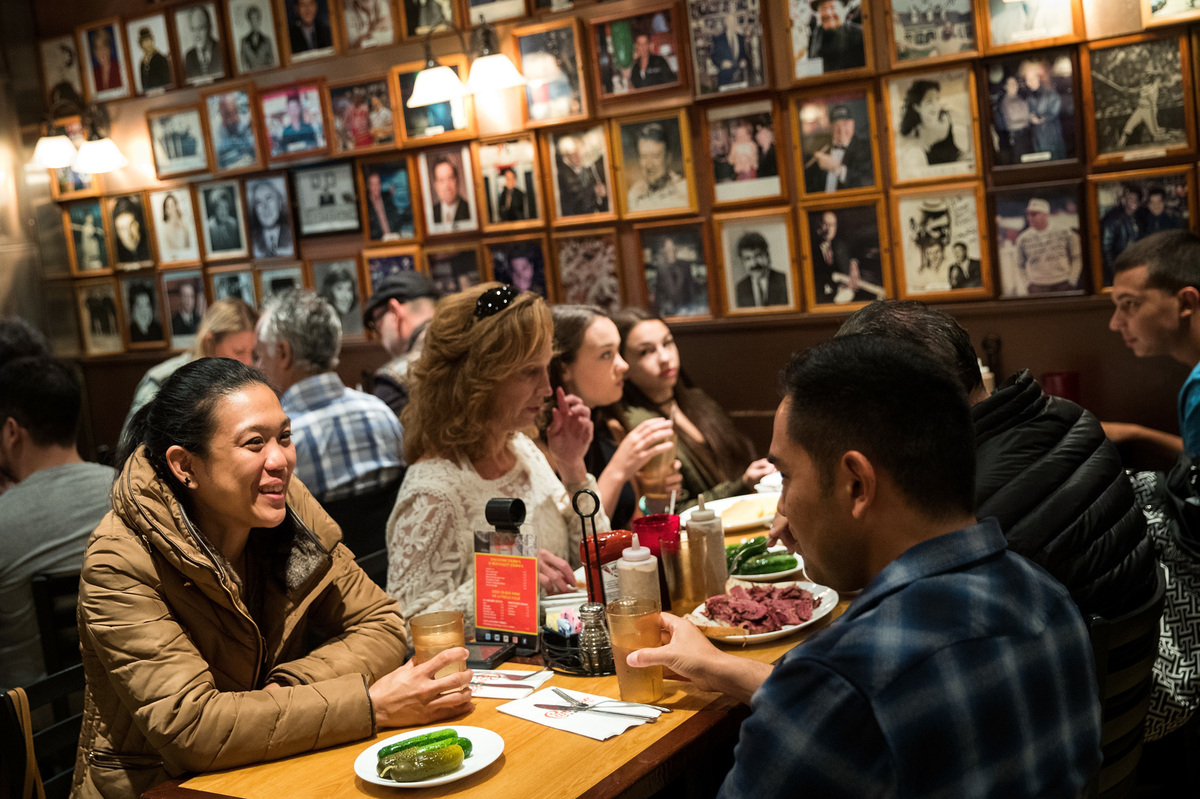 Customers dine at Carnegie Deli in New York City. The iconic deli, known for its large pastrami and corned beef sandwiches, announced it will close at the end of the year.

One of the most famous delicatessens in New York will slice its last sandwich this week.

The Carnegie Deli opened in 1937 on Seventh Avenue across from Carnegie Hall. But it didn't' achieve notoriety until decades later — around the time that director Woody Allen filmed a table full of off-duty comedians there in his movie, Broadway Danny Rose.

There's still a "Woody Allen" sandwich on the menu at the Carnegie Deli: half pastrami, half corned beef. But the real star is that pastrami.

"People love my pastrami so much, it's like a human being," says owner Marian Harper. "It's overwhelming to me."

Harper inherited the Carnegie Deli from her father, Milton Parker, who took over the restaurant with partner Leo Steiner in 1976. Back then, the Carnegie was just another deli in the theater district. Then a reviewer from The New York Times listed its pastrami among the best in the city. Ever since, Harper says, it's been tough for customers to get a table. 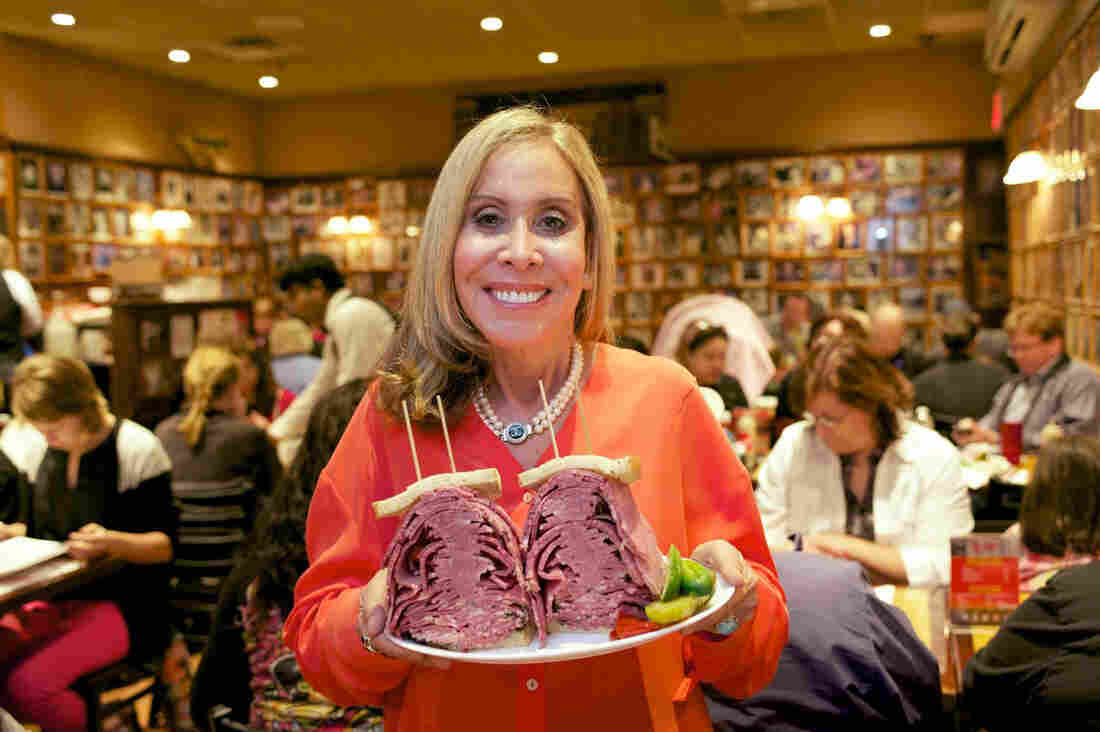 Marian Harper is the owner of the iconic deli. She inherited the restaurant from her father. David Verdini/Courtesy of Carnegie Deli hide caption

"They know to come here hungry," says Harper. "They love the big portions. My father called it gargantuan sandwiches, he used that name."

The deli's oversized portions and over-the-top attitude made it an essential New York experience.

"The Carnegie is really the New York Jewish deli," says Ted Merwin, professor of history at Dickinson College, and the author of Pastrami on Rye: An Overstuffed History of the Jewish Deli. "It's a symbol for what I call the ethos of excess."

Merwin says restaurants like the Carnegie Deli and its longtime rival, the Stage Deli, played an important role in American Jewish culture.

For Jews, an important part of their becoming American was being able to eat in delis that were in and around the theater district, says Merwin. "So the celebrity culture was something they participated in very avidly." 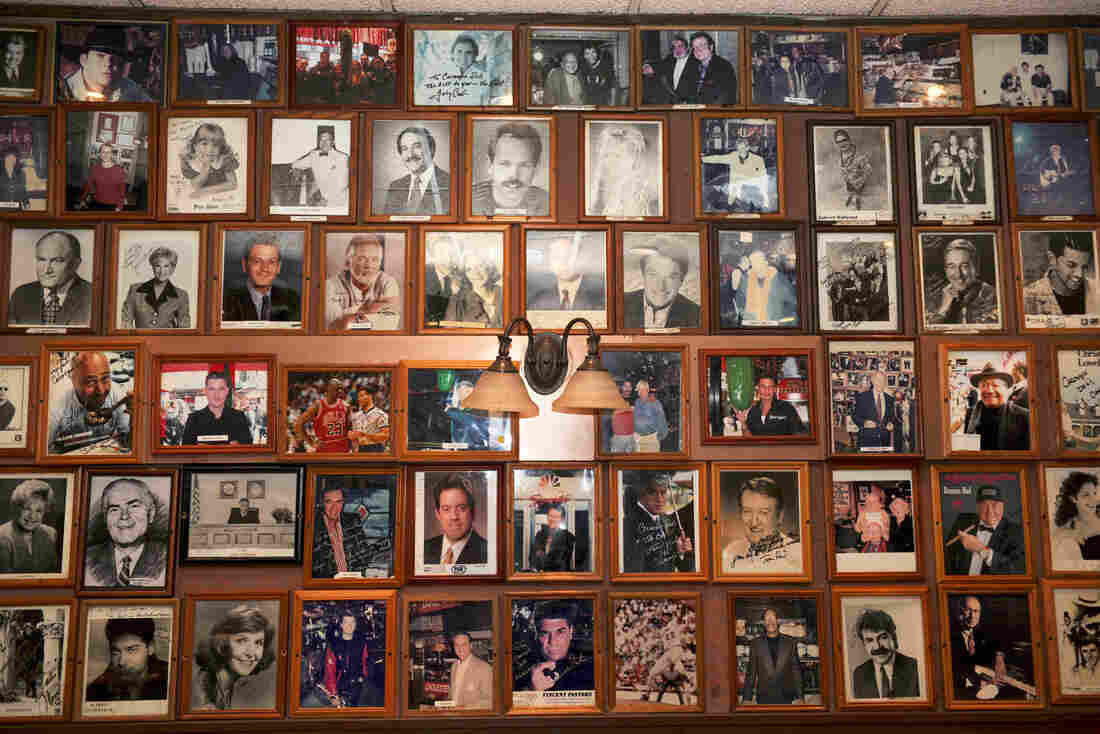 Pictures of movie stars and famous people who have dined at the deli hang on the restaurant's wall. /Courtesy of Carnegie Deli hide caption

The walls of the Carnegie Deli are still lined with photos of Broadway stars. But most of them are forgotten now. And most of the patrons don't bat an eye at the Christmas music being piped into the dining room. They're mainly tourists, hungry for a nostalgic New York experience.

"I'm sorry to see it go," says John Sinnott, who was dining with his wife and two children. The family lives in the Hudson Valley and visits New York City every year during the holiday season. Sinnott says it's an annual family tradition to see the Christmas tree at Rockefeller Center, and stop at the Carnegie Deli for lunch.

"It's another part of New York that's gone forever," he says. "You have to move forward. But some things you don't want to leave behind."

The Carnegie Deli has been struggling lately. It closed for 10 months after workers reported a gas leak. A court ordered the restaurant to pay its employees more than $2 million in back wages. 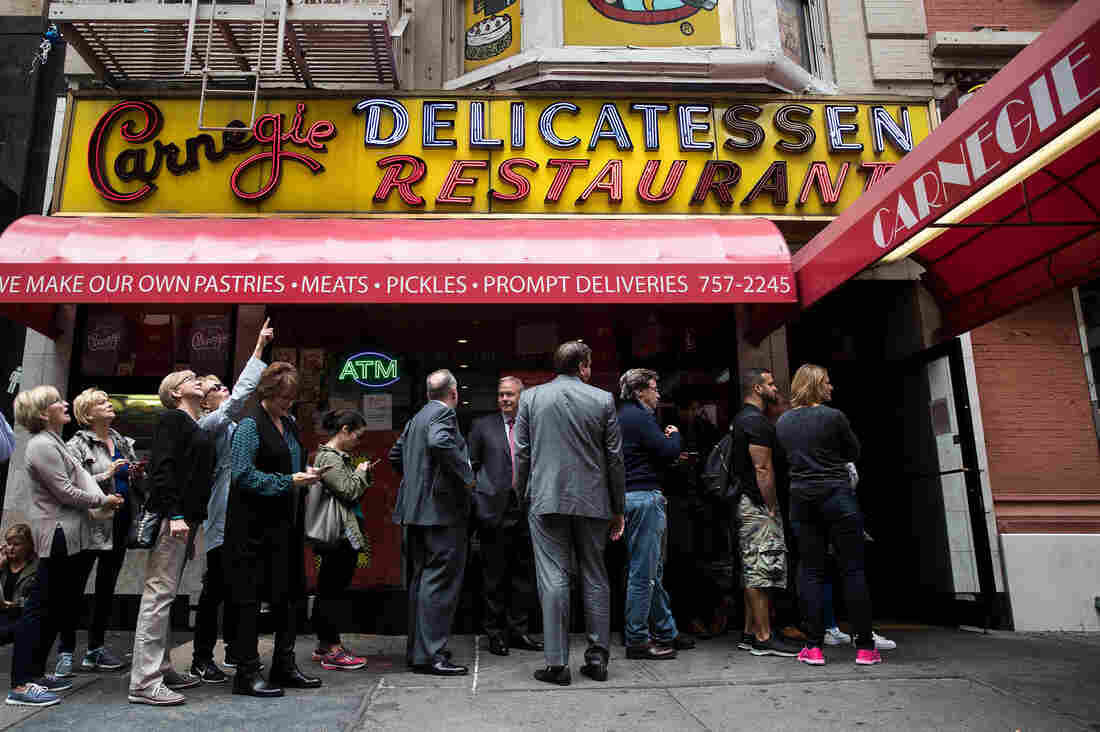 Customers wait in line outside for a table at the Carnegie Deli. Drew Angerer/Getty Images hide caption 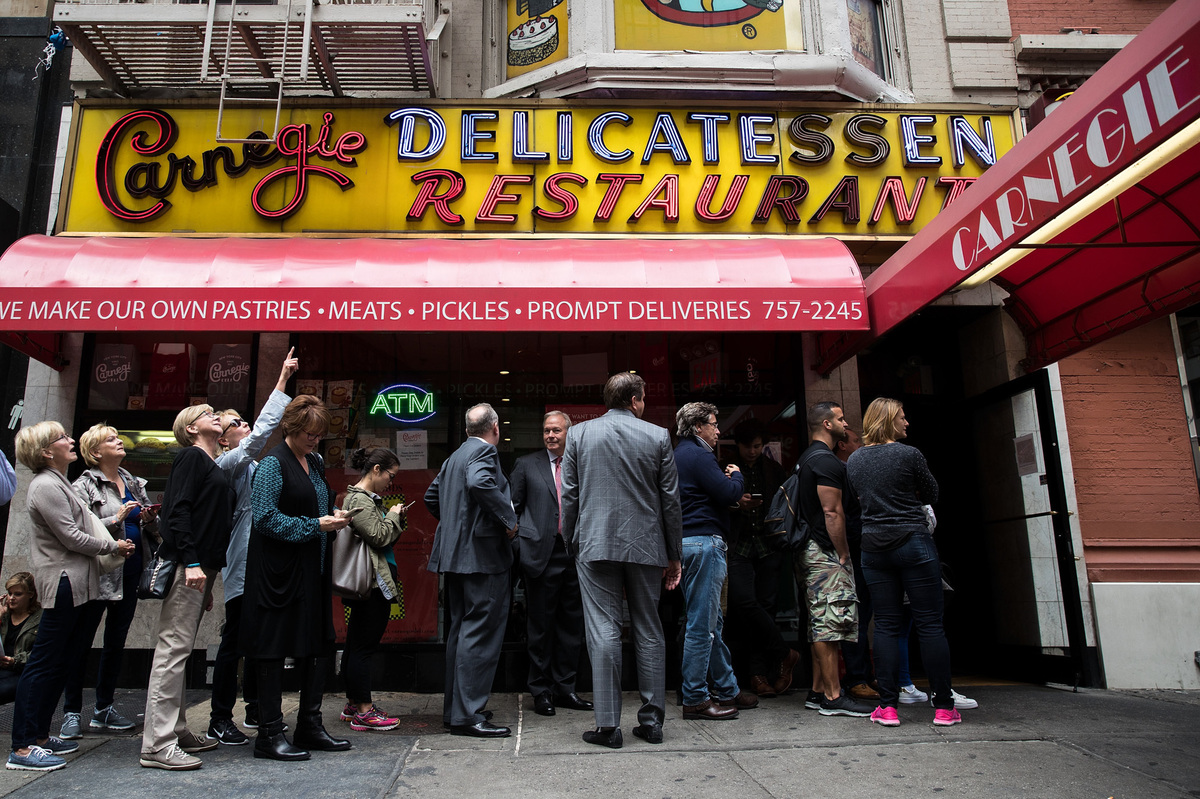 Customers wait in line outside for a table at the Carnegie Deli.

Marian Harper went through a nasty divorce from her husband, who allegedly stole the deli's prize pastrami and cheesecake recipes, and shared them with his mistress. But Harper says none of that is responsible for the closing of the deli's Manhattan outlet at the end of the month.

"I'm at that certain age where I want to enjoy my life, and I want to do certain things," says Harper. "And all good things must come to an end."

The Carnegie Deli will still have outposts in Las Vegas and Bethlehem, Pa. But if you're looking for that table full of comedians in the back, you'll have to watch Broadway Danny Rose.

Carnegie Deli Says It Is Closing Down Its Landmark NYC Restaurant