Accessibility links
By Returning To Farming's Roots, He Found His American Dream : The Salt David Fisher's farm is a kind of American Dream. Not the conventional one of upward economic mobility. This is the utopian version, the uncompromising pursuit of a difficult agrarian ideal. 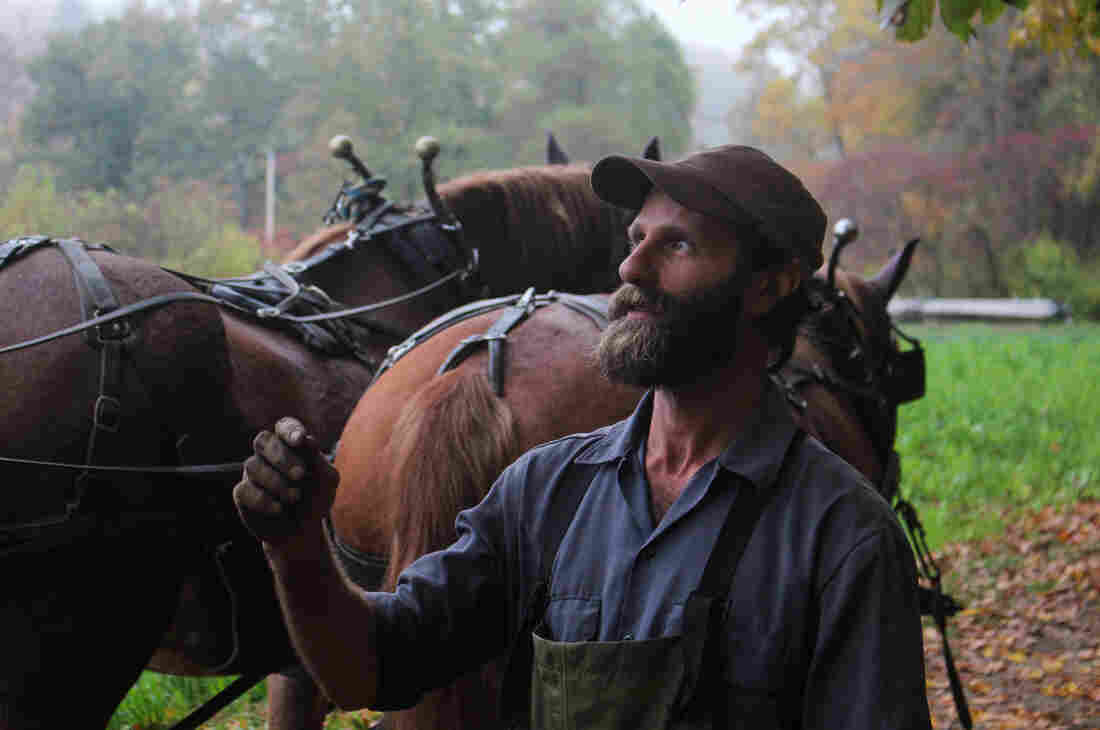 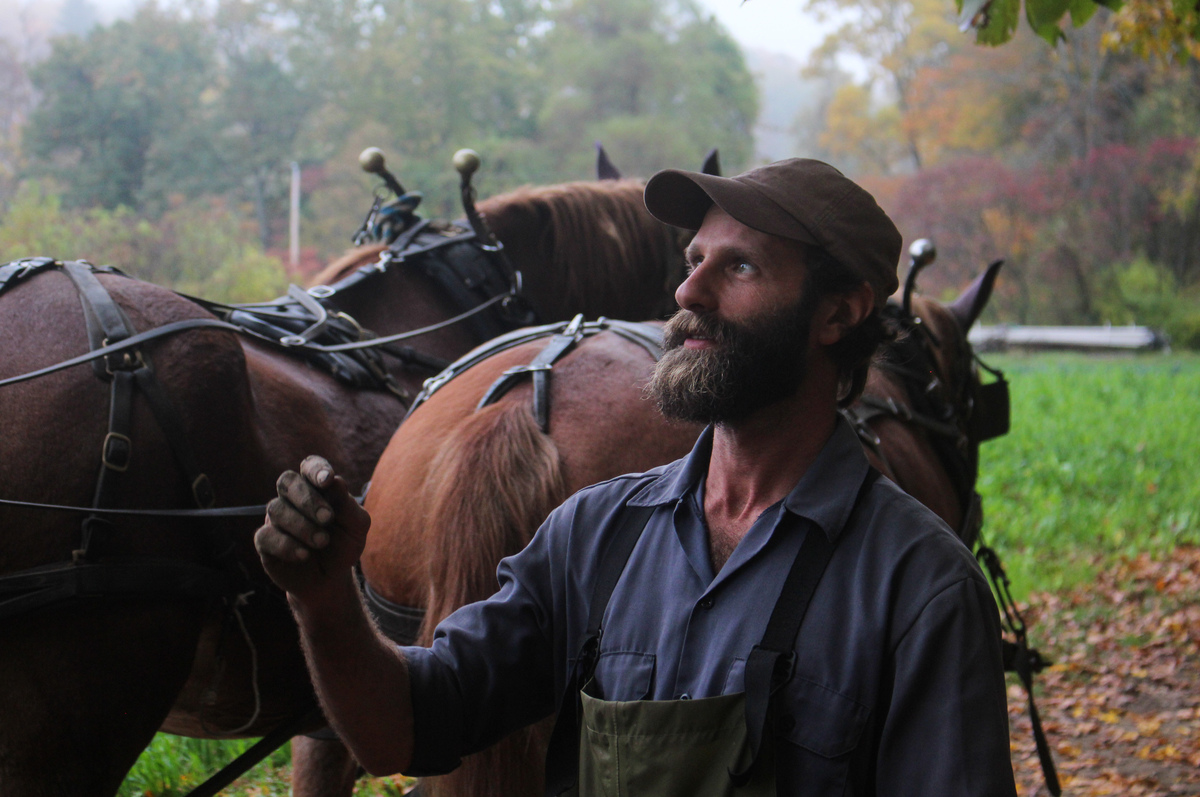 Eighteen years ago, on New Year's Eve, David Fisher visited an old farm in western Massachusetts, near the small town of Conway. No one was farming there at the time, and that's what had drawn Fisher to the place. He was scouting for farmland.

"I remember walking out [to the fallow fields] at some point," Fisher recalls. "And in the moonlight – it was all snowy – it was like a blank canvas."

On that blank canvas, Fisher's mind painted a picture of what could be there alongside the South River. He could see horses tilling the land – no tractors, no big machinery – and vegetable fields, and children running around.

This is David Fisher's American Dream. It may not be the conventional American Dream of upward economic mobility. But dreams like his have a long tradition in this country. Think of the Puritans and the Shakers and the Amish. These American dreams are the uncompromising pursuit of a difficult ideal.

The scene that David Fisher imagined, on the New Year's Eve almost two decades ago, has turned into reality. It's called Natural Roots Farm. 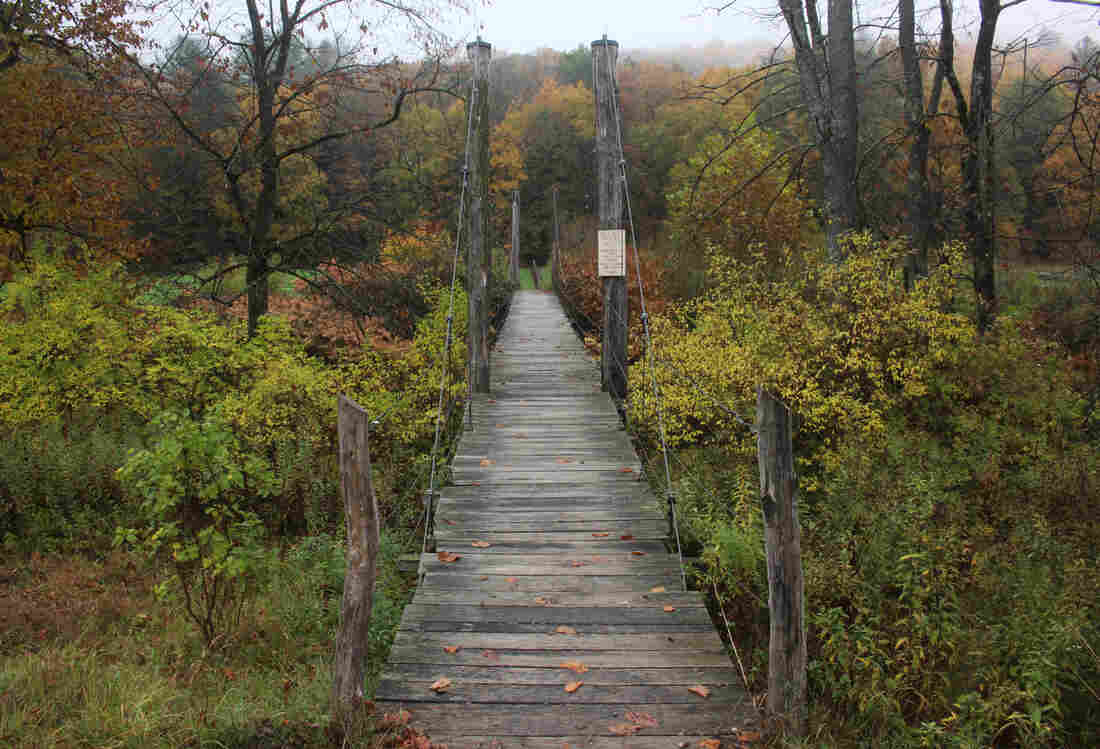 To get to the farm, you have to leave the motorized world behind. Cross the South River on a swinging footbridge, and there in front of you are seven acres of growing vegetables, neatly laid out in rows.

It's early in the fall, on this day; the hillside beyond the fields is glowing with red and yellow leaves. It's idyllic, almost magical.

Anna Maclay is out checking on the fields.

"I came originally as an apprentice in 2002," she tells me. "Totally fell in love with the land. I just thought, 'I want to live here!" 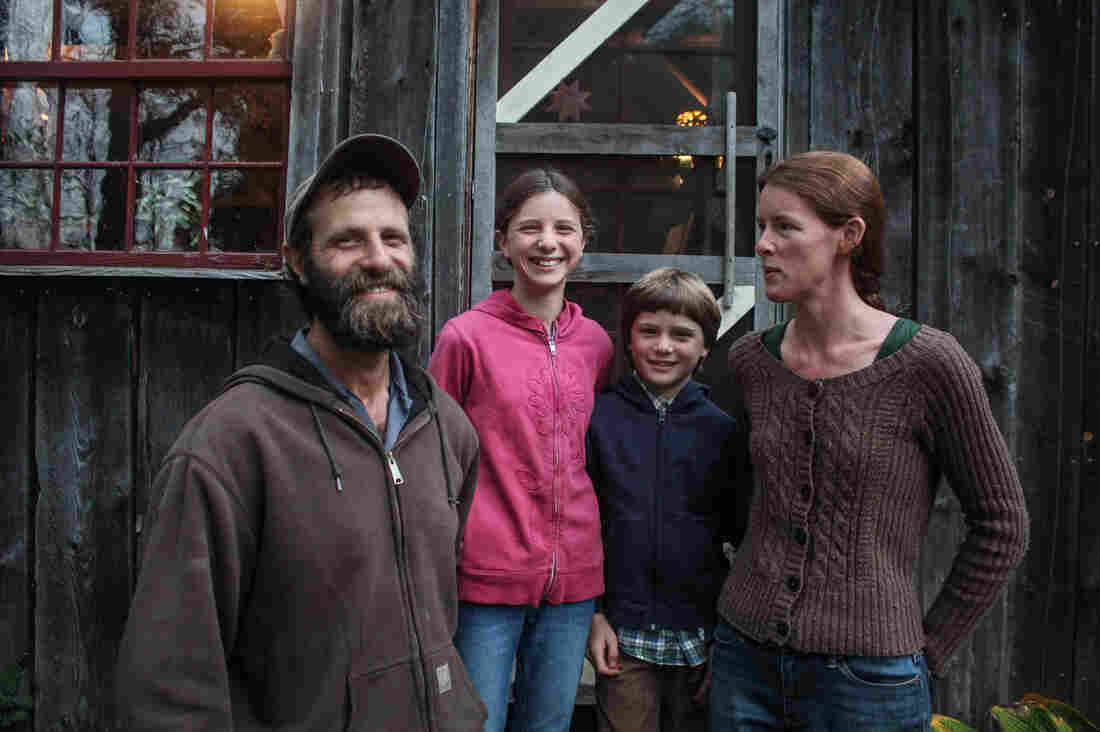 Her wish came true in a way she hadn't expected. She and David Fisher fell in love and got married. They now have two school-age children: Leora and Gabriel.

It's a harvest day on the farm and David and Anna have some help. They're joined by Emmet Van Driesche, who lives nearby on his own farm, and two apprentices, Kyle Farr and Calixta Killander, who are living and working on the farm for a year. Together, they'll need to fill a wagon with spinach, beets, broccoli and a host of other vegetables and herbs.

About two hundred customers have bought shares in the farm's harvest. Among them is Maggie Potter. She arrives with her children to pick up her produce. "It's not only having the vegetables – the nourishment for our own bodies. It's creating community, making friends along the way," she says. 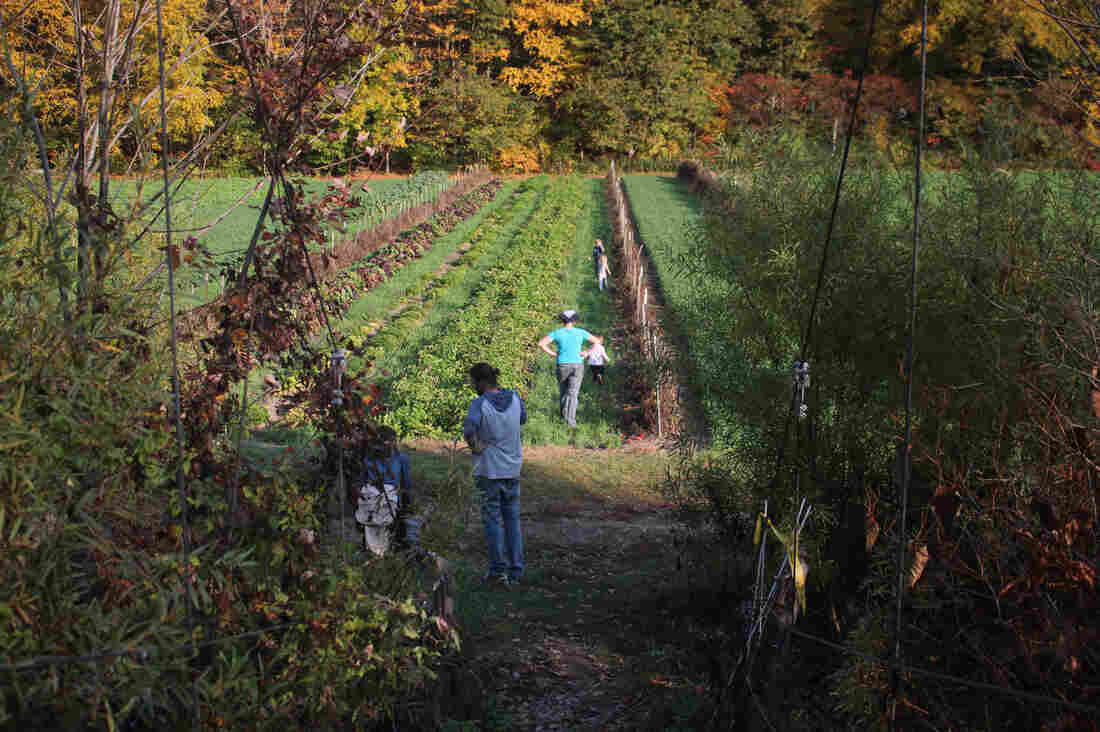 If this all sounds like a vision of peace and contentment, take a closer look. Watch David Fisher at work. While the apprentices stick together in the fields, chatting as they work, Fisher works by himself, cutting greens off just above the soil, hacking out heads of broccoli. He moves quickly, with purpose in every step, almost never stopping, from daybreak until dusk. And when you talk with him, it becomes even clearer: He's a very driven man. He's driven, in fact, by a kind of desperation. And to understand it, you need to know his life story.

David Fisher grew up in the suburbs north of New York City, in the village of Pleasantville, in Westchester County. He spent summers at a rustic camp in the Adirondacks. "You could only get there by boat, you couldn't drive there," Fisher says. "No electricity, bathe in the lake, live all summer in a tent."

Then, at the end of every summer, he'd get on a train back to Grand Central Station and it would hit him. "Noise, steel and concrete and lights everywhere," he recalls. It was an overwhelming sensory experience, and for young David, it wasn't a pleasant one.

When he was 15, that end-of-summer paradigm shift was more than he could take. He was overtaken by despair over the environmental fate of the earth. "I was like - this is craziness. The whole thing. Civilization as I'm seeing it is absurd. The way that humans are living on, consuming, destroying the earth is absurd," he says. "The only thing I could see to do was pack up and flee."

He determined to drop out of high school; his parents forced him to get a diploma, graduating early. Then, Fisher got as far as he possibly could from houses and highways and smokestacks. He hung out in the west, skiing and backpacking, immersing himself in nature to "soothe his soul," as he puts it. He loved it, but he still knew, in the back of his mind, that it was just an escape. It wasn't an enduring path out of his despair about the world.

One day, when Fisher was 20 years old, he was back on the East Coast, visiting a friend at Hampshire College, here in western Massachusetts, and he wandered into the college's small organic farm. It was another overwhelming sensory experience, but the opposite of Grand Central Station: "Autumn leaves raining down, and the lush fields of vegetables and cover crops. Open the barn door, and the tables are lined with this abundance of earthy, healthy, vital produce. And I was like, 'Wow!'"

He felt like he was seeing, for the first time, a way to live immersed in the natural world, and also be productive. To make a living. 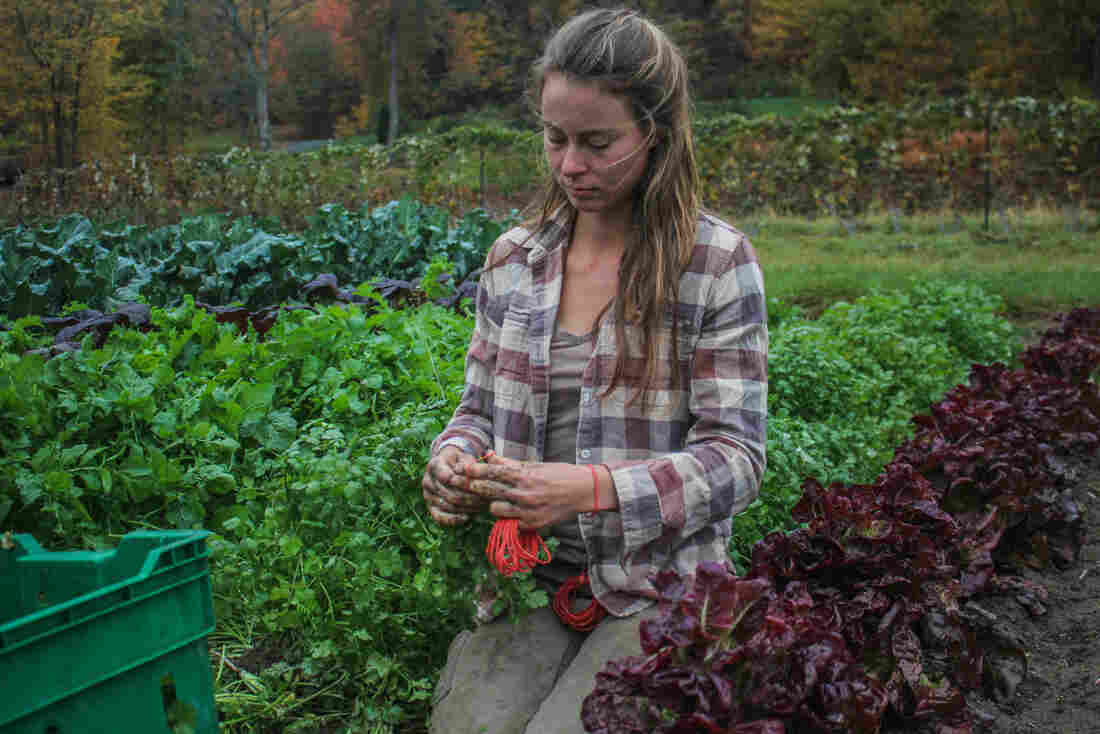 He started learning to farm, from other farmers. And then he found this land near the town of Conway.

You can call this farm utopian, if utopia is the kind of place where you work extra hard and live very frugally so that you can grow food in a way that's more in harmony with nature.

For instance: Half of the land on this farm is always devoted to "cover crops" that don't produce any food that customers will buy. The purpose of these crops is simply to protect and nourish the soil.

His most defining choice, though, is to rely on horses as the primary source of power on the farm. 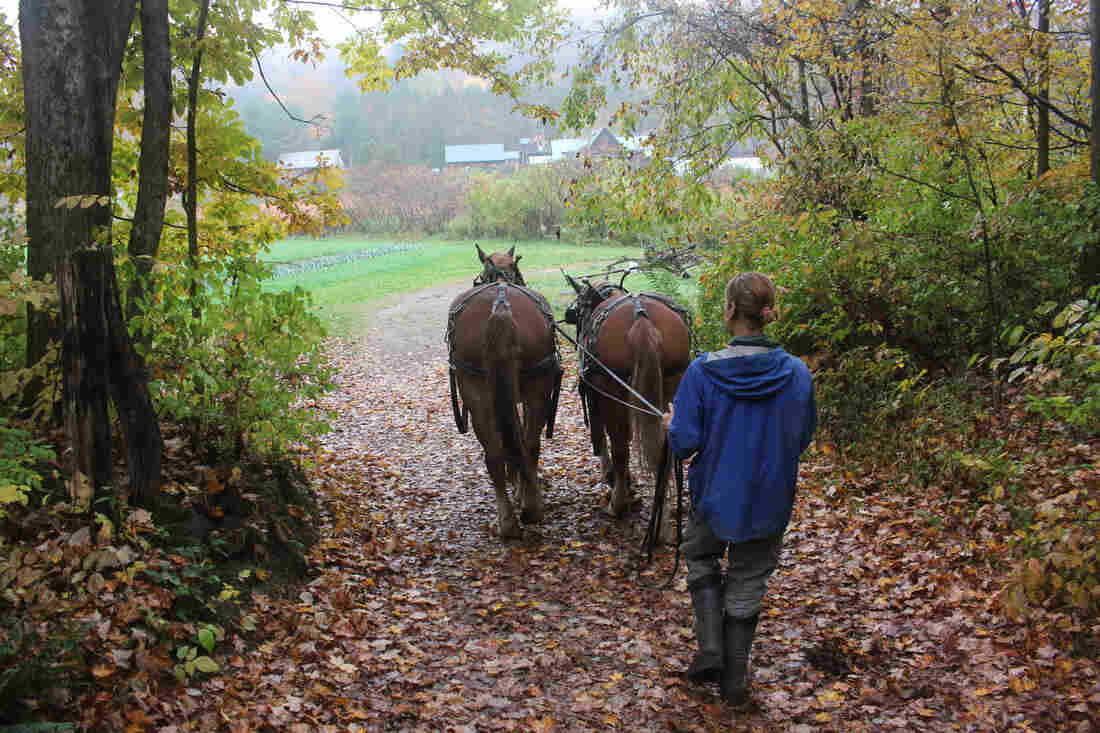 Two of them, Pat and Lady, pull a wagon full of vegetables from the fields across the river and up a hill to a small barn beside the road where families come to pick up their produce. Kyle Farr, one of the apprentices, holds the reins and directs the horses with cryptic words and sucking sounds.

David Fisher is committed to horses partly because it makes the farm more self-sufficient. "It's so direct," he says. He doesn't have to rely on fossil fuels. "The fuel is there in the grass. The power is right there, in the form of these live animals." Also, he says, horses force you to work at a more natural rhythm.

But there's a cost, in the form of time. Horses need care and feeding every day, whether they're pulling a wagon that day or not.

Fisher learned this past year that two former apprentices at Natural Roots Farm who had learned to work with horses here and then adopted this method on their own farms, recently went back to farming with tractors. 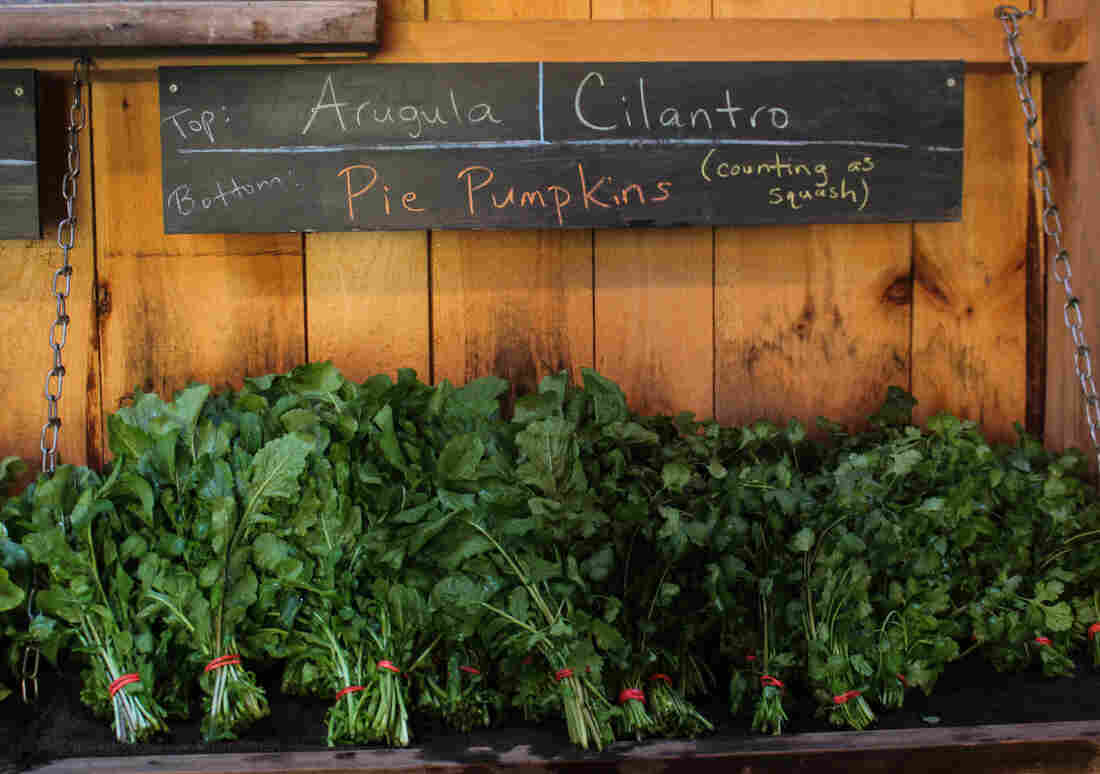 It bothers him. But he's not giving up. Because for him, working with horses is one small answer to the despair that led him here. "The environmental crisis is heavy. It's a heavy, heavy situation. And to find any hope of effecting some sort of change, or examples [of change] is critical to my emotional, psychological well-being," he says.

Over breakfast that day, I ask David, "Are you a perfectionist?" He starts to deny it, but Anna cuts in. "Yes!" she says.

He and Anna both tell me that David's driving ambition to build a better farm — constantly working, always starting some new project — has led to conflict between them. "This is the long-standing disagreement," Anna says softly. "I always think that we need to take on less, you know?" 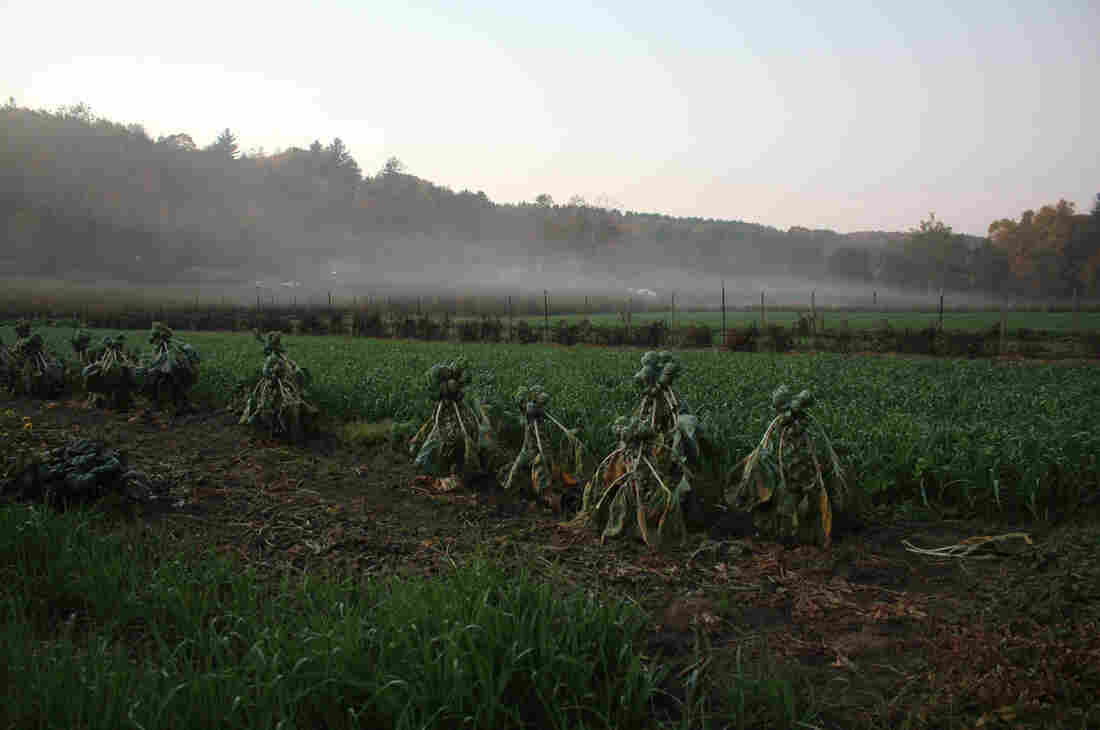 They've managed to keep this farm afloat for almost two decades now, but "it's still a serious struggle to make the economics of it work out," David says. And apart from worries about money, they have to manage the logistics of a complicated life — 200 families depending on a steady supply of produce from their farm, children in school and playing soccer, and their car parked on the other side of the river, a quarter-mile walk from their rustic home.

"There's not a lot that's easy about living this way," she says. "But most of it feels pretty right. And I guess that's turned out to be more important, for me."

Those are the words they often use, talking about their choices. This small, alternative American Dream, for them, just feels right.