Accessibility links
A Survival Guide To Colonial Cocktails (So You Don't Die Drinking Them) : The Salt Colonists in the New World experimented with new and unfamiliar ingredients. The results were Lambswool, Ass's Milk and other innovative drinks, some of which could kill you. 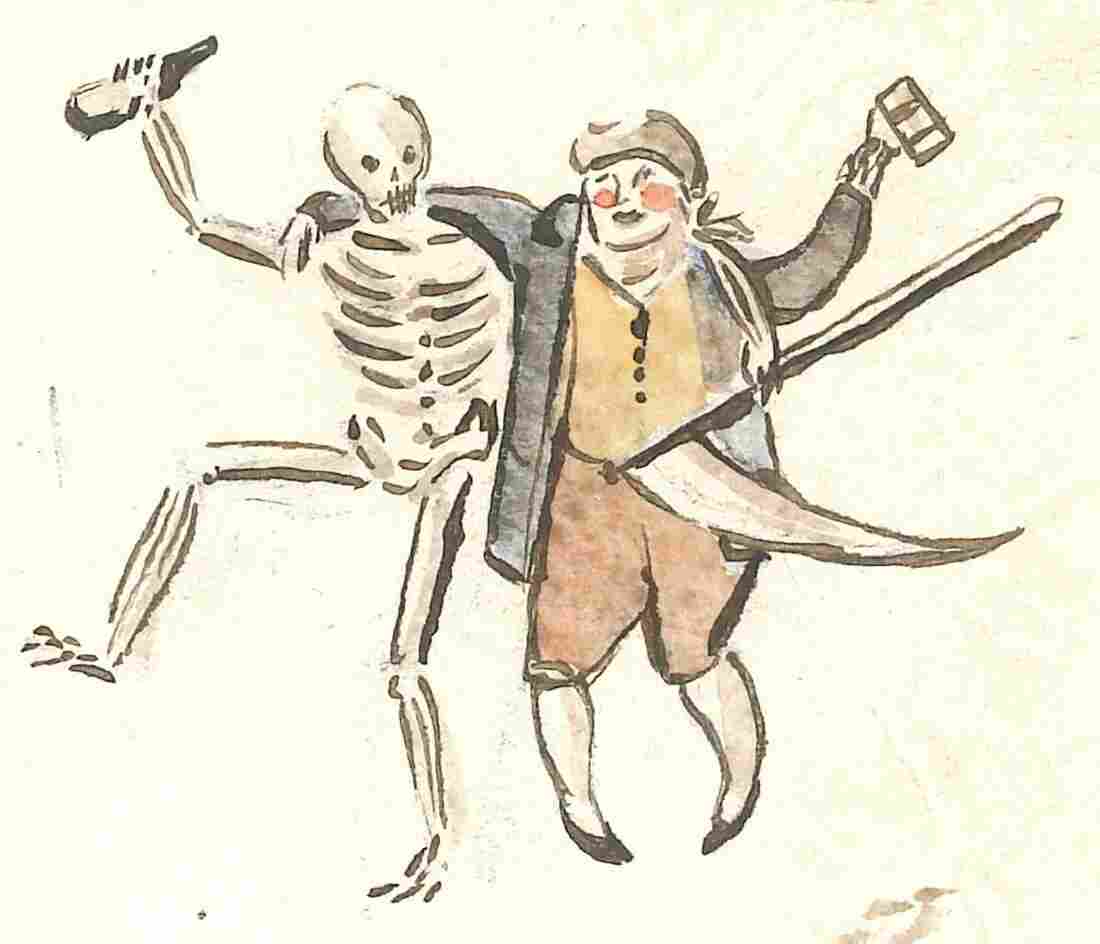 Drinking was a big part of life in Colonial America. It also required some experimentation and creativity on the part of colonists looking to create cocktails with new and unfamiliar ingredients. Reverend Michael Alan /Courtesy of Abrams Image hide caption 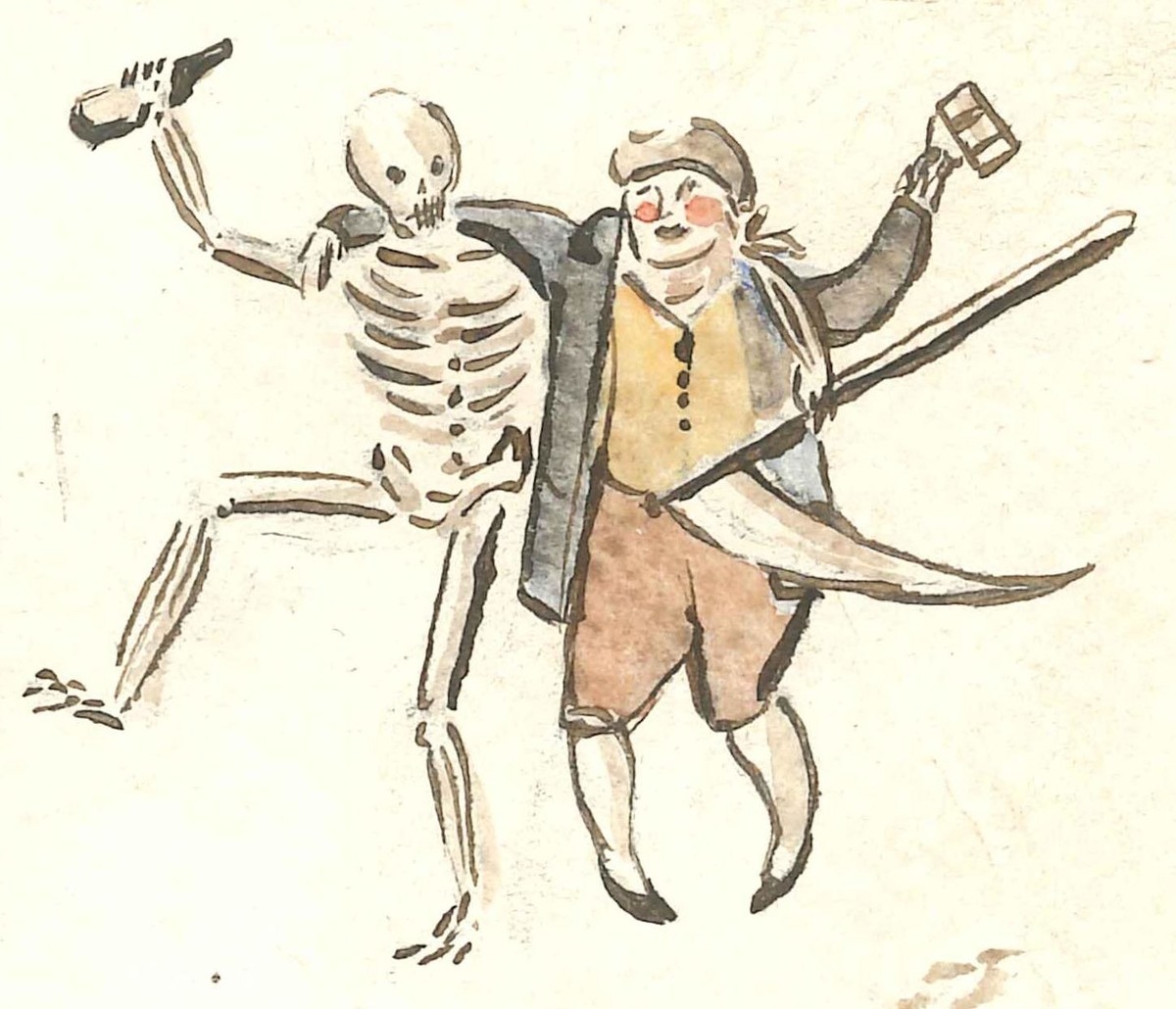 Drinking was a big part of life in Colonial America. It also required some experimentation and creativity on the part of colonists looking to create cocktails with new and unfamiliar ingredients.

When spirits entrepreneur Steven Grasse considered writing a book about early American cocktails, he already knew it was a subject that had been, in his own words, "done to death."

Ultimately, the book he did write, Colonial Spirits: A Toast to Our Drunken History, tells the story of a time when water was full of deadly bacteria, making alcohol the safest liquid to consume. As Grasse says, "this book is about survival."

Colonists, transplanted to a New World, were faced with the task of re-creating old recipes, often with unfamiliar new ingredients. Alcohol was a godsend in the Old World, sipped by adults and children alike. In the New World, imbibing called for experimentation. There was plenty of trial and error, and, in Grasse's view, an unexpected recipe for democracy.

"Before democracy, there were spirits, and from spirits we created taverns," writes Grasse in the book, "and it was in those taverns that we laid out the blueprint for a new kind of country. ... In other words, we got drunk and invented America." 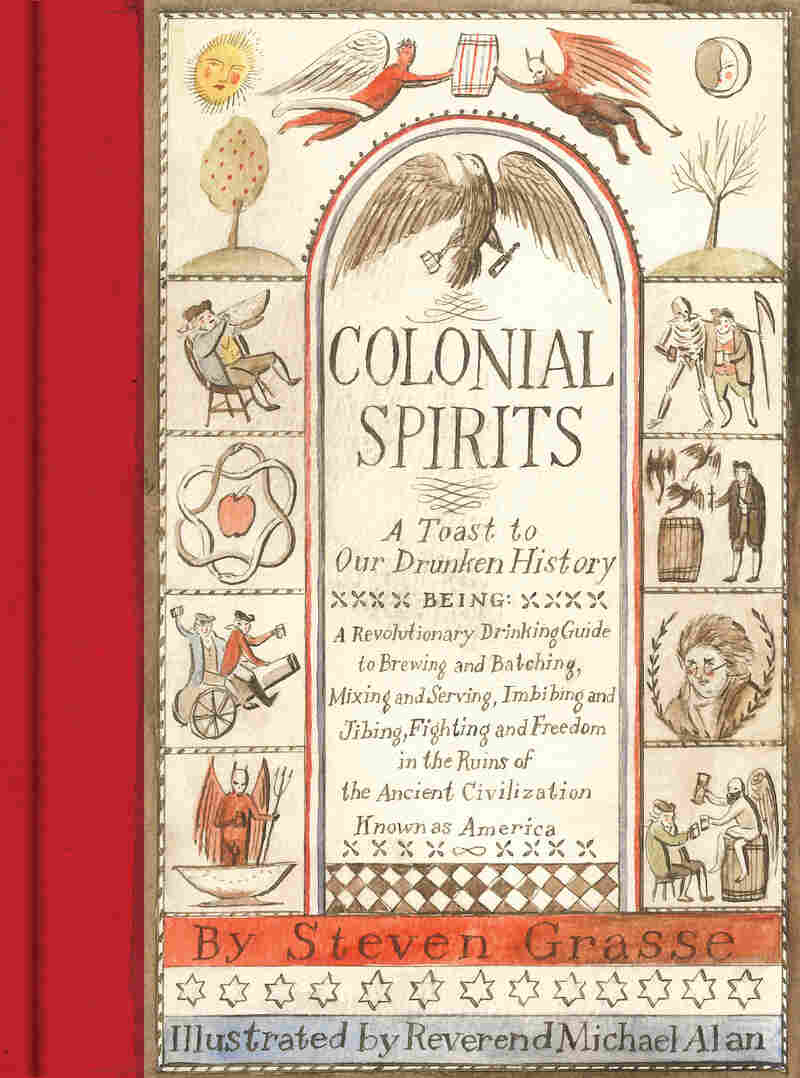 With witty illustrations by Reverend Michael Alan — think Pennsylvania Dutch folk art crossed with Edward Gorey — Colonial Spirits thumbs its nose, ever so slightly, at the American obsession with mixology and fussily precise 12-ingredient cocktails. It does so by providing just one simple premise outlined on Page 3: "In relating these recipes to you, and updating them for modern times, it was of the utmost importance to us that you — yes, you — would not die or even be hospitalized should you choose to make or imbibe them."

In all honesty, some of this stuff could kill you. In fact, on Page 154, you'll find out that, yes, some home distillers were desperate enough to try making alcohol from sawdust — which Grasse reminds us would actually be methanol. So, yes, you'd die if you imbibed it, which is exactly why you won't find a recipe for it in Colonial Spirits.

What you will find, however, is Ass's Milk, Cock Ale, and Lambswool (only one of them does not actually involve farm animals), with a tongue-in-cheek history of each concoction in question and modernized versions that sound, actually quite palatable.

"I wanted to make this like a Betty Crocker kind of book," says Grasse. "This is not a book for snooty mixologists. These are culinary folktales."

The Golden Age Of Cocktails: When Americans Learned To Love Mixed Drinks

While many of those mixologists tend to laud the recipes by Jerry Thomas, the bartender generally credited with popularizing mixed drinks beginning in the 1850s, Grasse's view is that cocktails existed well before Thomas was behind the bar.

"Cocktailing, as we know it," says Grasse, "was a result of industrialization and the rise of leisure time. But punch was clearly a cocktail, just served in a communal bowl." 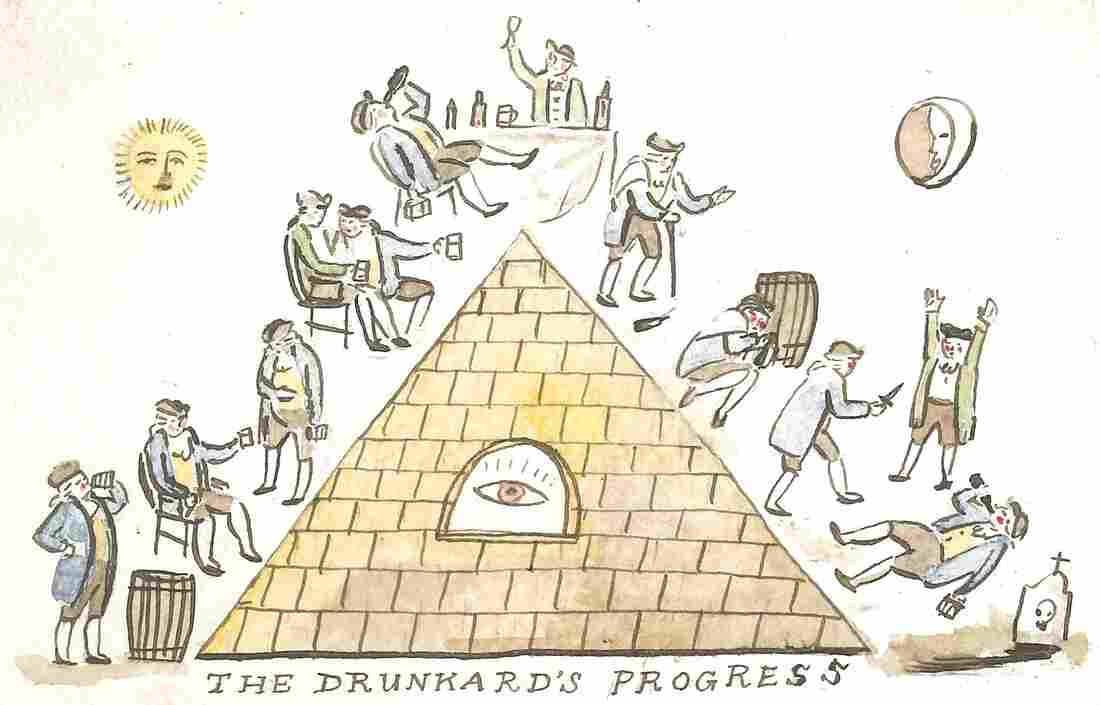 Temperance was a hot-button issue for Puritans, even though they weren't opposed to a cider "multiple times daily," says Grasse. The cartoon known as "Drunkard's Progress" warned people about the dangers of imbibing, with the morning dram leading to debauchery and death. Reverend Michael Alan /Courtesy of Abrams Image hide caption

Sharing and crafting history is a hallmark of Grasse's career, which has included creating Hendrick's gin, Sailor Jerry's rum and Art in the Age craft spirits. A team of 65 employees in Grasse's Philadelphia-based company, Quaker City Mercantile, did copious amounts of historical research into the alcoholic recipes of early America. They dug through 17th, 18th and 19th century manuscripts detailing the booze preferences of Gen. Ethan Allen's Green Mountain Boys, a failed attempt during the 1500s to establish a vineyard in what is now Jacksonville, Fla., and how rum was considered to be a cure for syphilis, malaria and even death.

Many of the recipes are unfailingly simple: Spruce Ale starts with spruce essence made from Douglas fir tips (be sure to pluck those tips from actual spruce trees instead of some possibly poisonous lookalike, the book cautions, so you don't, you know, die), which is added to chilled ale. The Everlasting Syllabub ended up being a favorite of illustrator and recipe tester Alan, who says, "It's essentially a big bowl of whipped cream that you incorporate a little bit of alcohol into. There's really nothing bad about that."

Drinking Whiskey In The Spirit Of George Washington

During the process of recipe testing for the book, Grasse's unique position as a distillery owner also gave him the opportunity to make a small-batch production of one of the recipes, Martha Washington's Cherry Bounce, a classic blend of brandy, cherries and sugar, typically enjoyed during winter as a fresh taste of summer. The updated version, made at Grasse's Tamworth Distilling in New Hampshire, incorporates rye whiskey and smoked cardamom for a modern twist on a Colonial favorite, while also tipping a hat at George Washington, who was one of America's largest whiskey producers.

"When I look at cocktail books, I don't really get a context," says Grasse. "So my goal was to present the historical context behind these recipes, while making it relatable to the modern reader. I like to retell these stories in a way that people can digest."

He pauses. "We're inspired by history, but not slaves to it," he says. "At the end of the day, the point is to have fun and maybe learn something at the same time."