Accessibility links
Hello, Dogfish! When A Shark Becomes A Tasty Taco ... And A New Livelihood For Fishermen : The Salt About 90 percent of the fish Americans eat is imported, yet fish caught off our shores is often exported. New efforts are promoting locally caught fish, especially ones we've never appreciated before.

If you've never laid eyes on a dogfish — or tasted one — you're not alone.

Yep, it's in the shark family. (See those telltale fins?) And fisherman Jamie Eldredge is now making a living catching dogfish off the shores of Cape Cod, Mass.

When populations of cod — the Cape's namesake fish — became too scarce, Eldredge wanted to keep fishing. That's when he turned to dogfish — and it's turned out to be a good option. The day I went out with him, Eldredge caught close to 6,000 lbs. (Check out the video above.)

"It's one of the most plentiful fish we have on the East Coast right now," Brian Marder, owner of Marder Trawling Inc., told us. Fishermen in Chatham, Mass., caught about 6 million pounds of dogfish last year.

So, who's eating all this dogfish? Not Americans. "99 percent of it" is shipped out, Marder says.

The British use dogfish to make fish and chips. The French use it in stews and soups. Italians import it, too. The Europeans are eating it up. But Americans haven't developed a taste for it. At least, not yet. 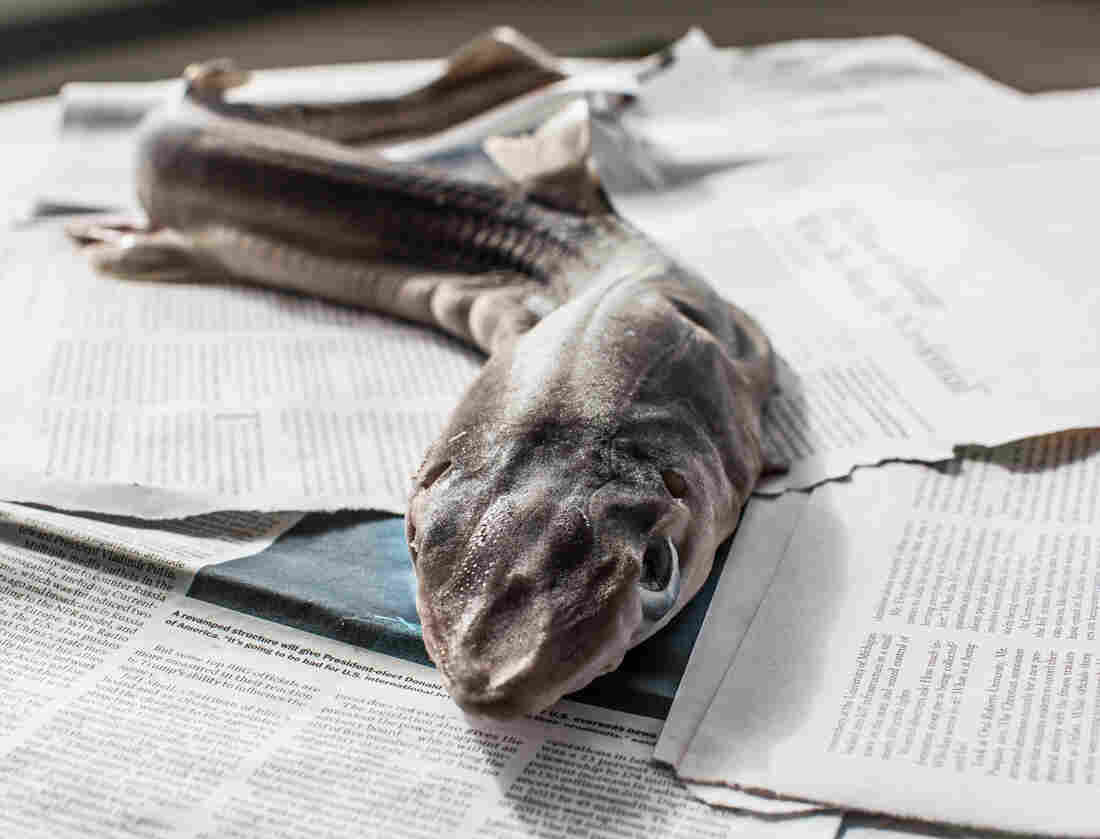 Close up, this shark may look menacing, but sautee it and drizzle some lemon caper sauce on top, and this dogfish becomes doggone delicious. Ben de la Cruz/NPR hide caption

The story of the dogfish is typical of the seafood swap. "The majority of the seafood we catch in our U.S. fisheries doesn't stay here," explains Jennifer Dianto Kemmerly, who leads the Seafood Watch program at the Monterey Bay Aquarium.

And while we export most of what is caught off U.S. shores, what do Americans eat? Imported fish. About "90 percent of the seafood we consume in the U.S. is actually caught or farm-raised overseas," Kemmerly says.

To sustainable seafood advocates, this swap doesn't make much sense. "We're kind of missing out on the bounty we actually have here," Kemmerly says.

And, it's not just dogfish.

The Environmental Defense Fund has launched a campaign called Eat These Fish to tell the story of a whole slew of plentiful fish caught off our shores. The group is trumpeting the conservation success of U.S. fisheries. Some species have been brought back from the brink of extinction through a system of quotas and collaboration between fishermen, conservationists and regulators. They point to fish such as Acadian Redfish and Pacific Ocean Perch.

"If people start to buy these fish more, we can really drive some more economic success to hard-working fishermen," says Tim Fitzgerald of the Environmental Defense Fund.

Sustainable seafood advocates want Americans to re-think our fish-eating habits. "We import salmon, tuna and shrimp," says Nancy Civetta of the Cape Cod Commercial Fishermen's Alliance. But "we do not eat the [fish] we're bringing to shore, right here!"

Civetta says it's good that fishermen have a market for their dogfish in Europe, but she argues we should be eating it here, too. She says a strong domestic market would strengthen the fisheries, making them less vulnerable to shifting preferences overseas. "If we continue to import and buy from other countries, then our fishing industry could wither away," Civetta says. And this would be a loss for coastal communities, she argues. 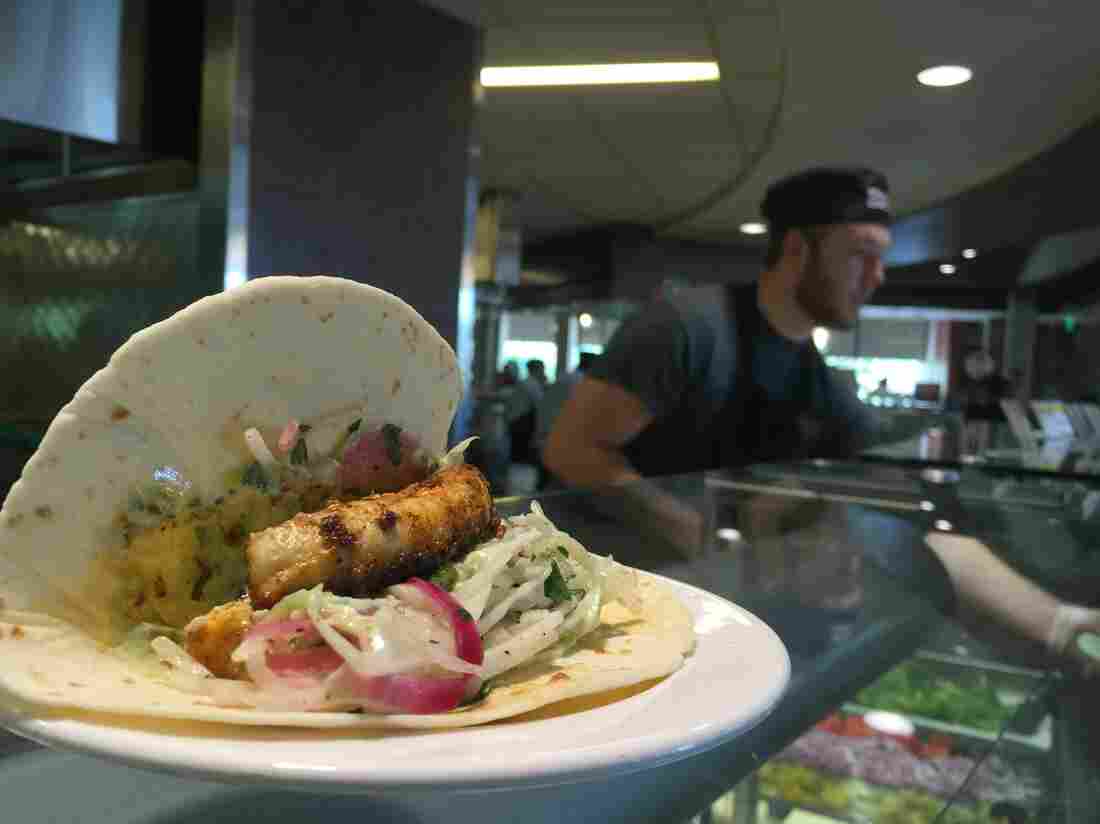 No, really, dogfish makes tasty tacos: These were on the menu at University of Massachusetts, Amherst, this fall. Allison Aubrey/NPR hide caption 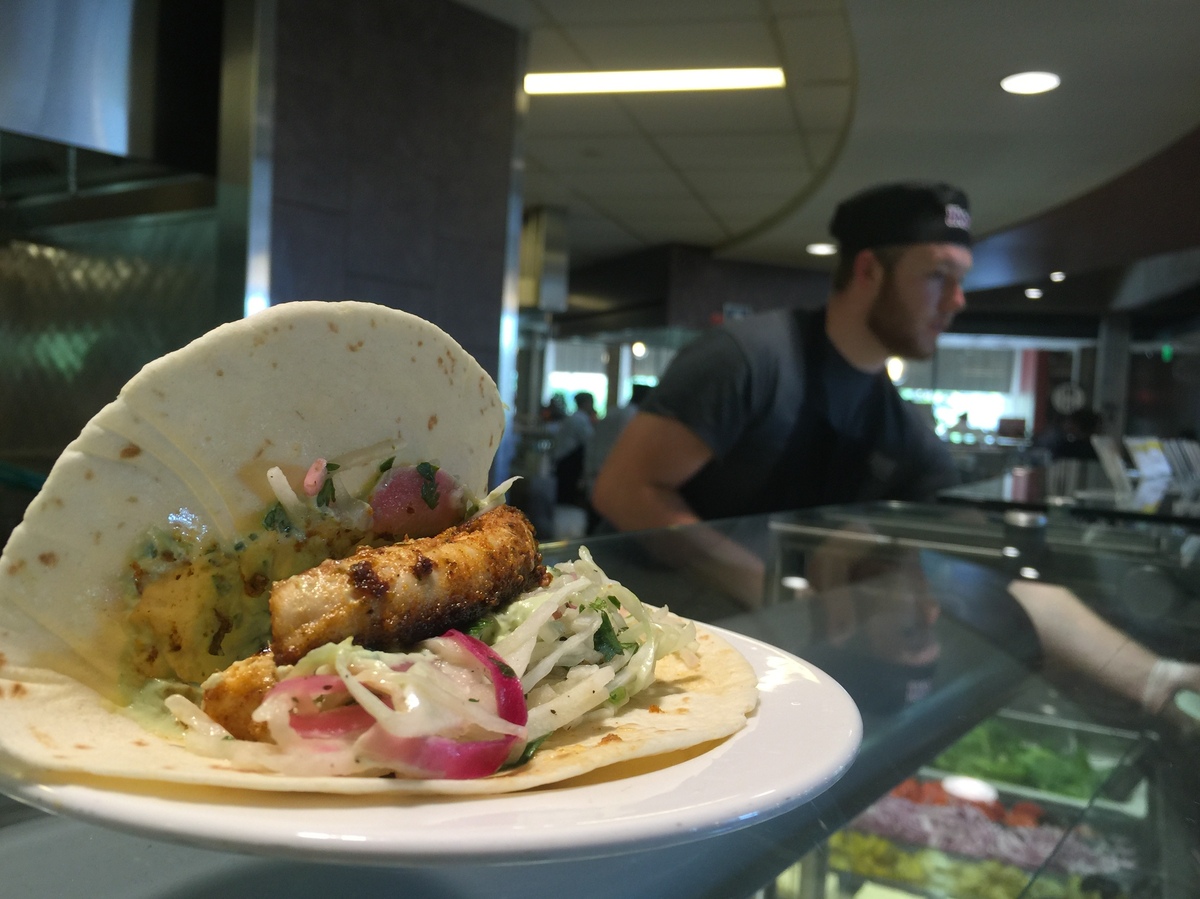 No, really, dogfish makes tasty tacos: These were on the menu at University of Massachusetts, Amherst, this fall.

So, is it possible to turn Americans onto dogfish? Chef Bob Bankert at the University of Massachusetts, Amherst thinks so. The university has contracted with Sea To Table, a company that connects domestic fishermen with chefs, universities and other buyers, to purchase dogfish.

The campus serves 55,000 meals a day and has made a big commitment to buying locally sourced foods. "Being in western Massachusetts, we love to support the Massachusetts fisheries," Bankert says. I watch as he grills dogfish fillets — "it tastes great," he vouches as he flips one over.

We were curious to see if students agreed. We hung out for an afternoon as students sampled dogfish tacos, dogfish sushi and an Asian flash fry made with dogfish fillets and drizzled with wasabi mayo.

"Oh, it's so good — amazing!" student Ruth Crawford told us as she finished off a taco. I asked her what the biggest appeal was. "It's new, it's local, so healthy," she told us.

Some students were a bit turned off by the display of the whole dogfish — with its menacing shark appearance — that was showcased on the dining line. "That's scary looking," one student told us as he walked by.

Dining hall manager Selina Fournier says that's where the storytelling comes in. When they saw the fish here today, she says, a lot of them didn't know what to make of it. But once they learned more about - where it comes from, who caught it - and they got the chance to taste it, "the whole association really ... brings [the story] to life."

It's not just universities that are promoting locally caught fish. Chefs, environmentalists and eaters across the country are embracing the concept of eating fish caught in a way that won't lead to overfishing or environmental problems, while also supporting local fishing communities. The National Restaurant Association has named "sustainable seafood" as one of its top 20 food trends for 2017.

Sea to Table is about to launch a direct-to-consumer, online fish market. It's scheduled to launch by the end of January. And this means that soon, Americans will be able to get dogfish and many other types of under-loved species from U.S. fisheries delivered to our front doors.

This story was reported as part of a collaboration with the PBS NewsHour.