Accessibility links
Pining For A Cozy Winter Drink? Try An Evergreen Liqueur : The Salt In Europe, pine-flavored spirits are a staple at ski lodges, but the idea has been slow to catch on in the U.S. As more American distilleries experiment with trees, however, that is changing.

Pining For A Cozy Winter Drink? Try An Evergreen Liqueur

Pining For A Cozy Winter Drink? Try An Evergreen Liqueur 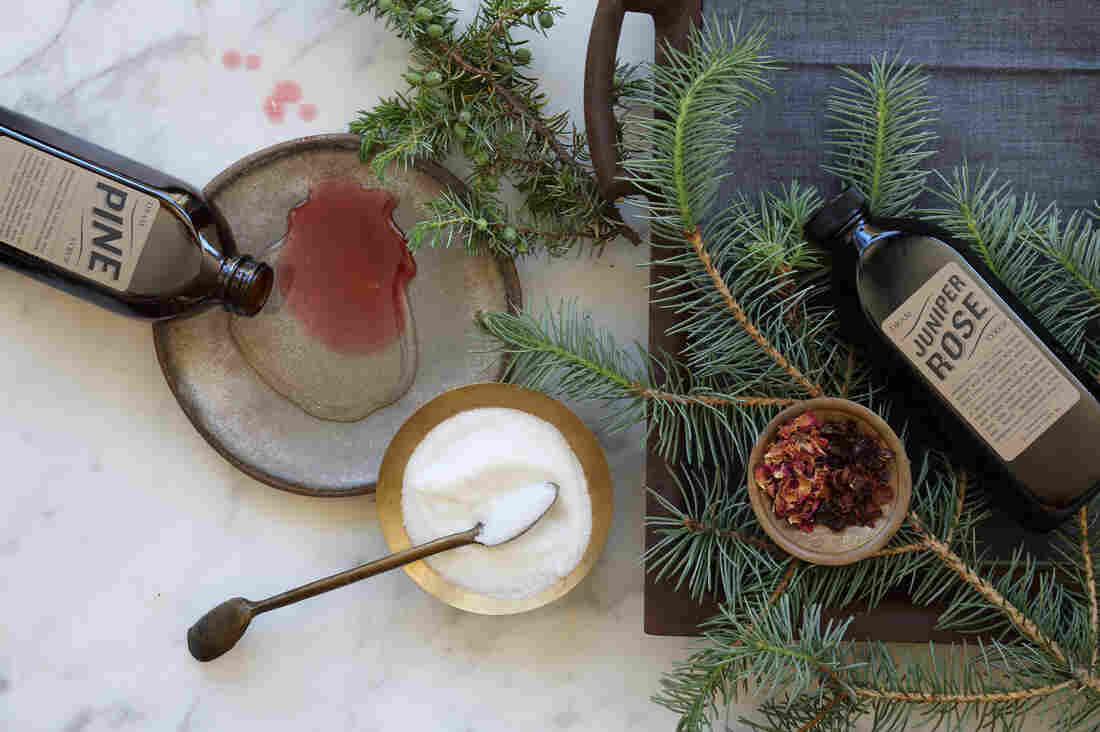 Colorado-based Dram Apothecary makes an evergreen syrup from local trees that can be used for both alcoholic and nonalcoholic beverages. Kelly Ishikawa/Courtesy of Dram Apothecary hide caption 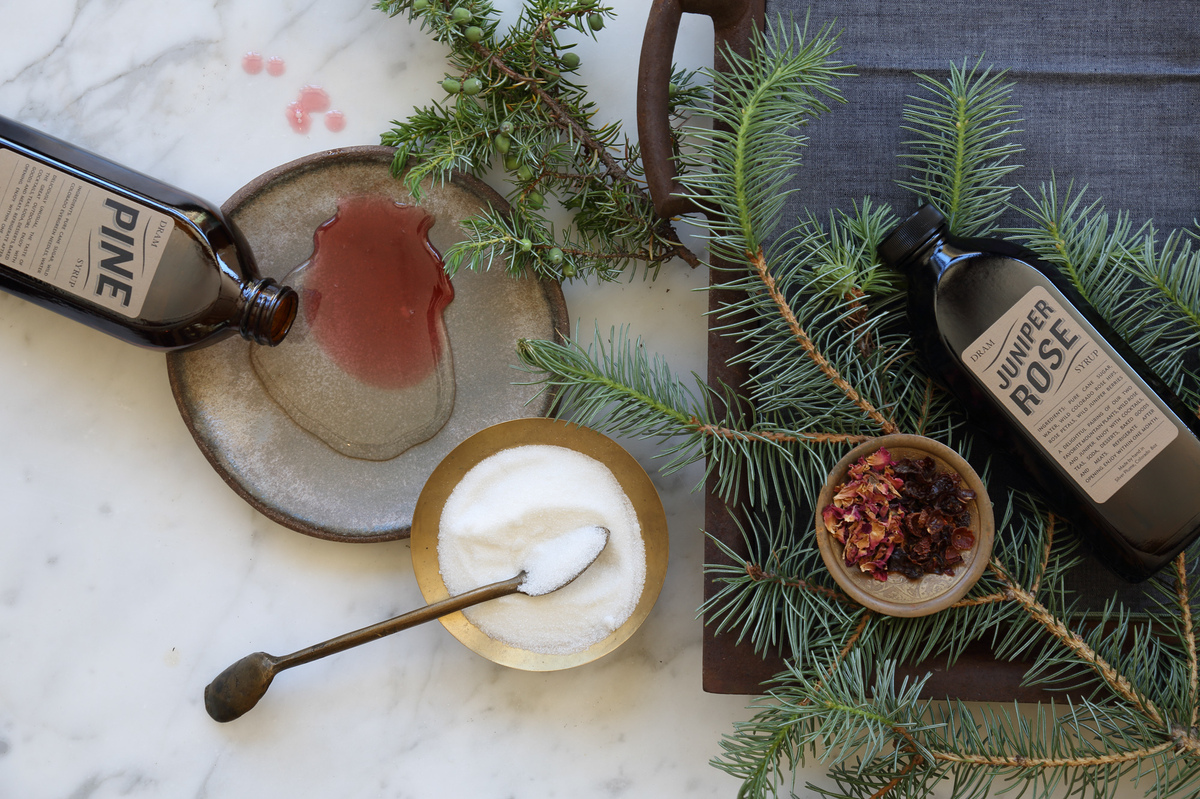 Colorado-based Dram Apothecary makes an evergreen syrup from local trees that can be used for both alcoholic and nonalcoholic beverages.

Though the great outdoors becomes more inhospitable when winter winds rise and temperatures drop, there's nothing like wandering through an evergreen forest as snow squeaks underfoot. And once people have trudged stiffly back inside, they can keep those forests with them by imbibing one of the world's many pine liqueurs.

These liqueurs have been a longtime fixture in European hotels and ski lodges. Under the umbrella of "schnapps" (essentially any strong, clear alcoholic drink with little resemblance to the sweetened stuff marketed as schnapps in the United States), Austrians have been brewing their own pine-flavored varieties for generations. Yet it wasn't until the early 2000s that these evergreen spirits finally made their way to America — 2005, in particular, seems to be the magic year. Call it good market research or just good timing, but at least three major pine spirits made their U.S. debut that year.

Any earlier and it's likely that pine liqueurs might have swiftly been forgotten. Pushing against the sweet excesses and cocktail-mixing flair of 1980s and '90s bar culture (and drinks with names like the "slippery nipple"), bartenders began reviving Prohibition Era classics like the Manhattan, martini and Negroni — all spirits-heavy drinks light on mixers and sugar. As this renaissance started to take off, bartenders became open to even more daring spirits and flavors that would help their menus stand out — and there are few flavors more distinctive to Americans than pine.

Zirbenz, a red-hued Alpine liqueur made from the fresh fruit of the Arolla Stone Pine, has been distilled by Austria's Josef Hofer family in Styria since the late 1700s. Reaching this evergreen is no easy task. It grows at altitudes of roughly 4,000 to 8,000 feet, right up to the Alpine tree line, after which conditions become too harsh. Though Zirbenz is often enjoyed in the winter, the mountaineers who pick the fruit harvest it when it ripens in early July.

Oregon's Clear Creek Distillery also harvests the buds for its Douglas Fir Eau de Vie when they're at peak freshness — early spring in the Pacific Northwest. In the 1990s, founder Steve McCarthy recalled the various pine spirits he'd tried in Europe and how he wanted to bring one to the United States. 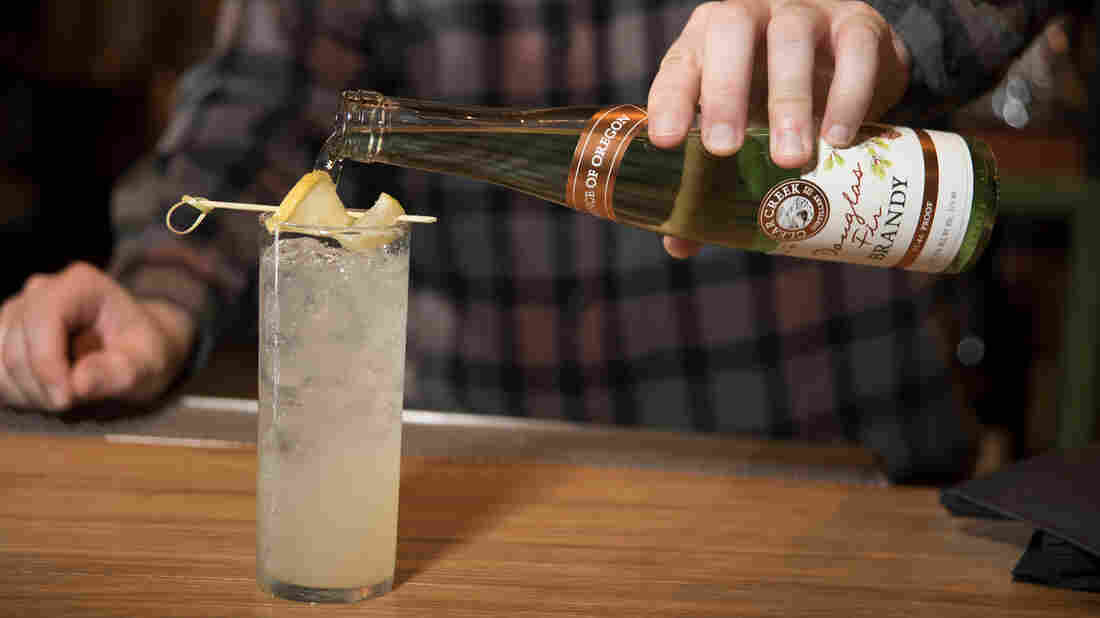 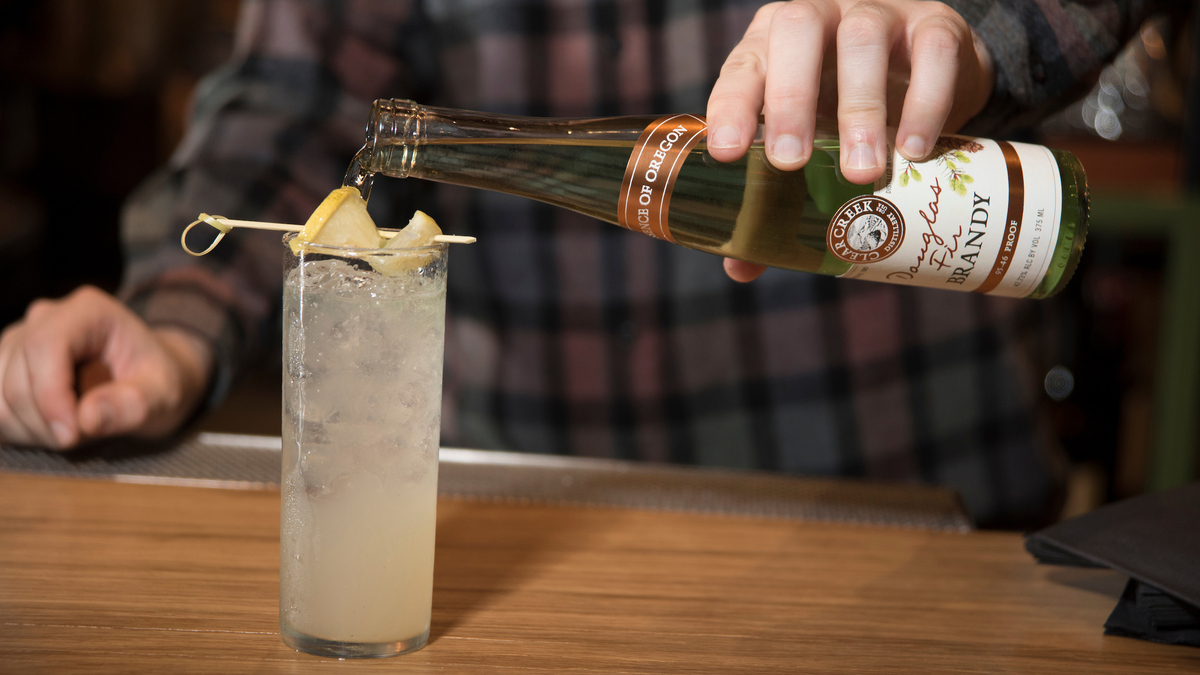 "It was by far the most difficult of all our products to make because it's not just 'crush, ferment, distill,'" says Jeanine Racht, Clear Creek's national sales manager. Douglas fir buds didn't have enough sugar in them for fermentation, so McCarthy turned to distillation. He soon got the flavor right but he wanted the liqueur to be green — with no added dye.

"Solving the puzzle was like a hobby for Steve," Racht explains. By the time McCarthy was ready to send the Eau de Vie to market, 12 years had elapsed. In purely economic terms, the product shouldn't exist. "A lot of money went into it," Racht says.

Unlike many spirits-loving animals — birds, butterflies, and Caribbean monkeys — humans are the MacGyvers of alcohol. The first evidence of a human-created "drink" is a honey, rice and grape mixture that dates back to 7000–6600 B.C. Since then, humans have been experimenting to try to turn plants and crops — from bananas to wormwood — into some type of intoxicant.

In the Mediterranean, mastiha, the resin from the mastic tree, has been used for cooking, chewing and drinking for centuries. Mastic is an evergreen, though it has leaves instead of needles and bears little resemblance to northern pine trees. When crushed, the resin releases a flavor reminiscent of pine or cedar. For more than 3,000 years, people on the Greek island of Chios have been gathering the resin, which is also called the "tears of Chios." The tree is scored and the dried crystals are collected and cleaned. It's a painstaking process that happens once a year at the end of summer. Today, one company, Skinos, makes the liqueur commercially. Though the product is sold in more than 20 countries, the United States is the biggest buyer.

Because alcohol isn't exactly a health food, pine's beneficial effects are downplayed in the marketing of spirits. But Dram Apothecary, based in Colorado, makes an evergreen syrup from local trees that can be used for both alcoholic and nonalcoholic beverages. It's high in vitamin C and is often used as an herbal remedy for colds or coughs.

Yet, Dram founder Shae Whitney says, not all evergreen trees are alike. People who want to make their own pine syrup often turn toward Colorado's local pine tree, the Ponderosa. "It's toxic," says Whitney, adding that on social media she's had to talk a few people out of making Ponderosa pine syrup. "Trees are difficult to identify at different altitudes," she explains. She purchased a Colorado tree guide on early outings to make sure her team was harvesting from the right kind of tree.

Spiky pine needles may not have been humanity's first choice for a spirit, but it's no surprise that at some point in history, someone walked into the snowy woods with a hankering for a stiff drink and noticed that there was exactly one plant still alive.