Accessibility links
Bears Ears Monument Is A Win For Tribal Food Sovereignty. Will Trump Undo It? : The Salt The newly created monument preserves 1.3 million acres in Utah where natives have foraged for millennia. But critics who point to the land's energy extraction potential want the designation undone. 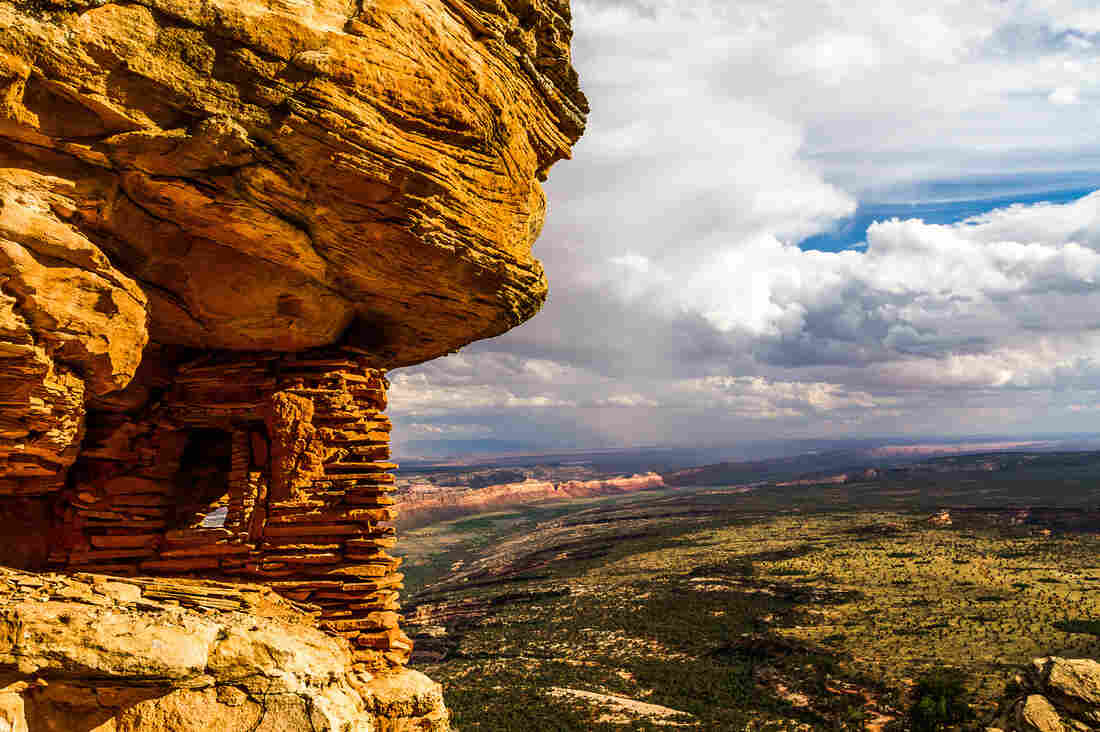 A prehistoric granary overlooking Cedar Mesa, a site inside the newly created Bears Ears National Monument in Utah that is sacred to many Native American tribes. Natives still hunt and forage for food and medicine throughout the Bears Ears region. Josh Ewing/Courtesy of Bears Ears Inter-Tribal Coalition hide caption 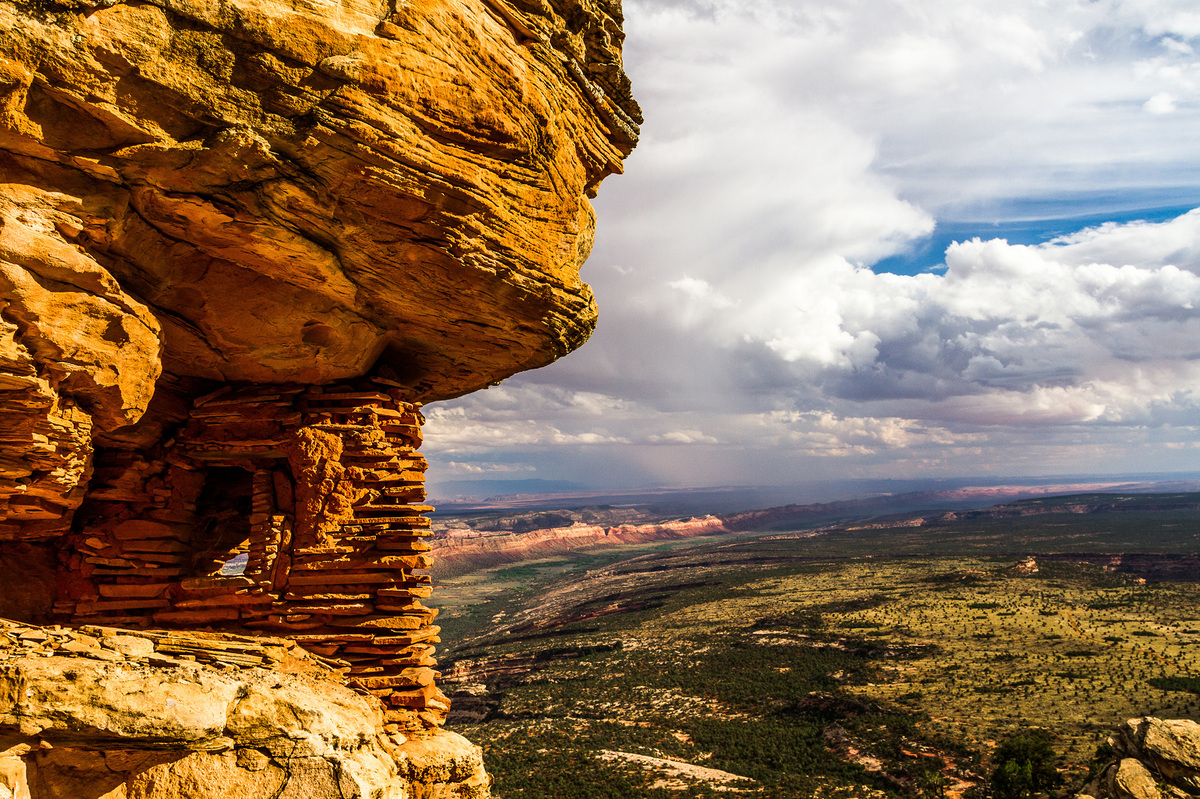 A prehistoric granary overlooking Cedar Mesa, a site inside the newly created Bears Ears National Monument in Utah that is sacred to many Native American tribes. Natives still hunt and forage for food and medicine throughout the Bears Ears region.

Seven years ago, the Navajo tribal council in southeastern Utah started mapping the secret sites where medicine men and women forage for healing plants and Native people source wild foods. They wanted to make a case for protecting the landscape known as Bears Ears, a place sacred not only to their tribe but to many other tribes in the region, going back thousands of years. In one of his final acts in office, President Obama late last month created the 1.35 million-acre Bears Ears National Monument, a move that proponents say will safeguard the area's ecology and guarantee food sovereignty for the region's Native Americans.

"Up to 20,000 Natives of various tribes live within 45 minutes of Bears Ears, including 10,000 Navajos that live just across the border in Arizona," says Gavin Noyes, director of the Utah Diné Bikéyah, the Navajo nonprofit that developed the initial draft of the monument proposal in 2013. "It's one of the wildest, most intact landscapes in Utah."

About 16,000 people live in San Juan County, where Bears Ears is located. Roughly half are Navajo, and many in the tribe lack running water and electricity, says Noyes. But the land still provides.

Women hike into the hills to gather wild onions and sumac berries for soup. They bundle juniper branches to burn, so they can stir the ashes into their family's blue corn mush. And they forage for piñon nuts, which saved tribes from starvation during times of drought. 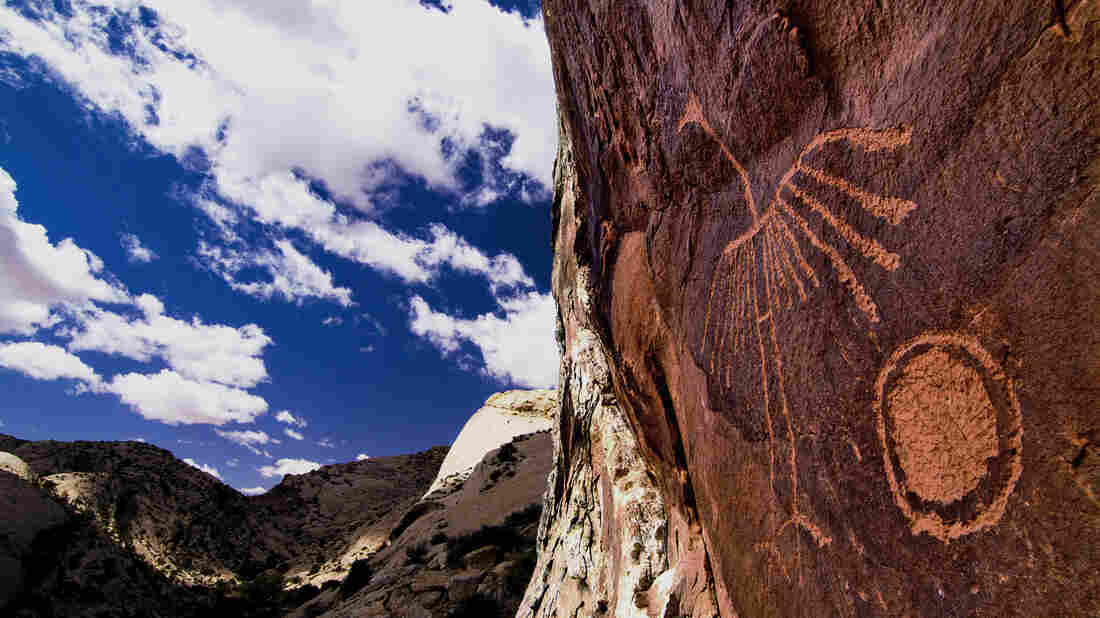 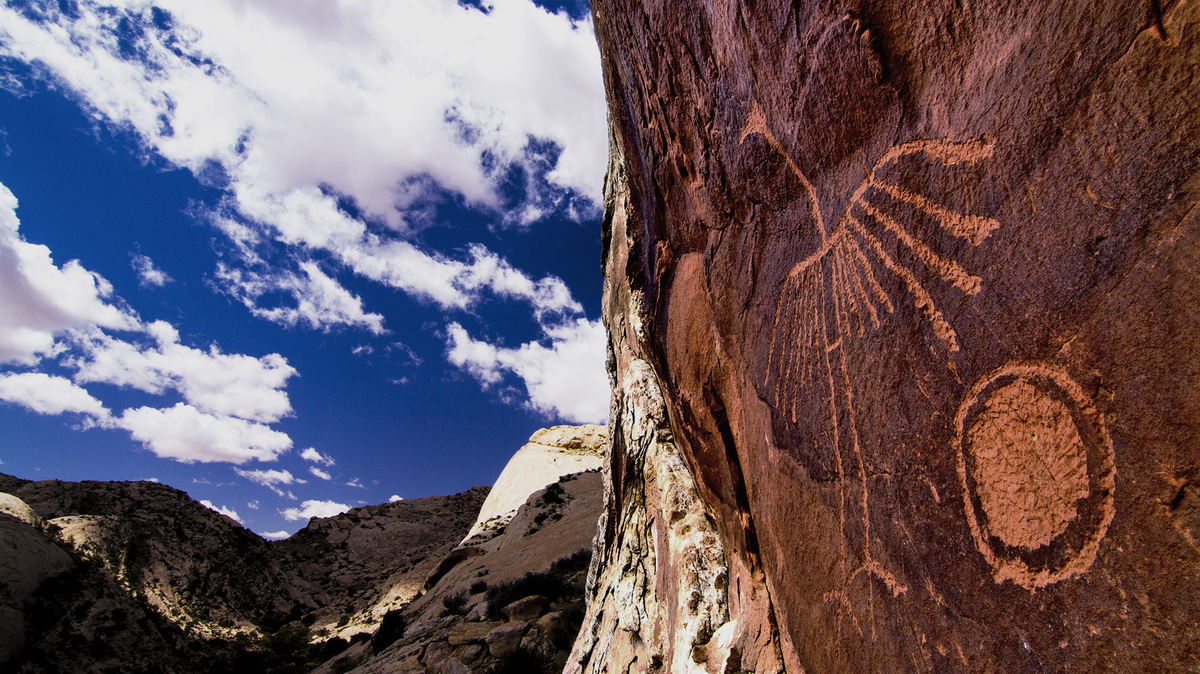 A petroglyph of a crane on Comb Ridge, part of the Bears Ears National Monument. The Ancestral Puebloans lived in the area's alcoves and grew corn in its washes, according to the Bears Ears Inter-Tribal Coalition.

Native hunters seek deer and rabbits, while elders collect sage leaves to throw over the fire in the sweat lodge, purifying the air and the thoughts of those inside. And when doctors fail to cure ailments, healers look to the sky for bird medicine in the prayerful flight of a red-tailed hawk or a golden eagle rising over flat-backed mesas.

Under the Bears Ears Monument designation, an intertribal coalition will partner with the U.S. Forest Service and the Bureau of Land Management to manage the area — which is slightly bigger than the state of Delaware — ensuring that tribes have access to food supplies and firewood. Such a partnership has never been attempted before in the 48 contiguous states.

For whites, conservation is a matter of not using the land, Noyes says. For Natives, it means actively tending it as they have for generations. "Our goal is to change how Americans view landscapes so that they include cultures" as well as plants and animals, he says.

But not everyone sees Bears Ears as a sacred source of food and healing — instead viewing the area for its energy-extraction and mineral potential, or for ranching. The Democratic president's most prominent critics – many of them Republican lawmakers at the state and federal levels — are already calling on fellow Republican Donald Trump to reverse the order after he takes office. That's something no president has done in the 111-year history of the Antiquities Act, the law that allows presidents to designate monuments. Especially in Utah, many of Obama's opponents would like to see the area stay open to potential energy extraction. 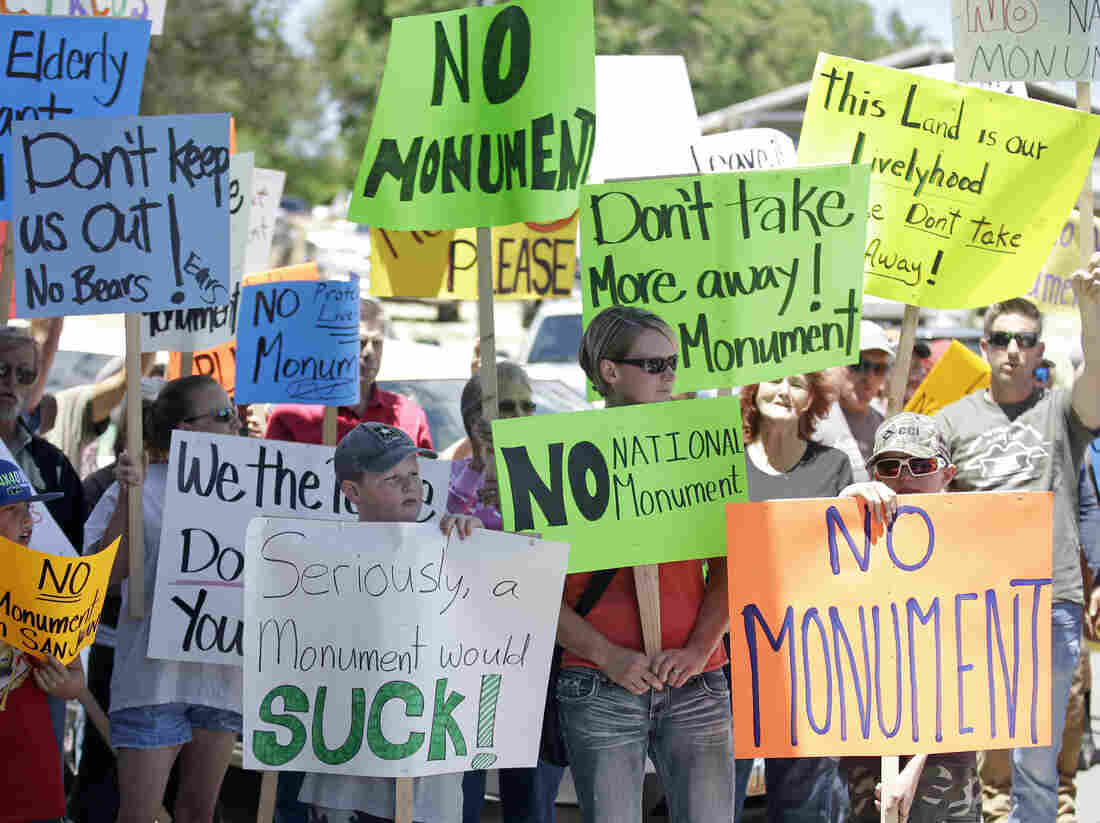 Last summer, protesters opposed to the creation of the Bears Ears monument held signs after U.S. Interior Secretary Sally Jewell arrived for a meeting with San Juan County Commissioners in Monticello, Utah. Now that the area has received monument designation, critics are calling on Donald Trump to undo it. Rick Bowmer/AP hide caption 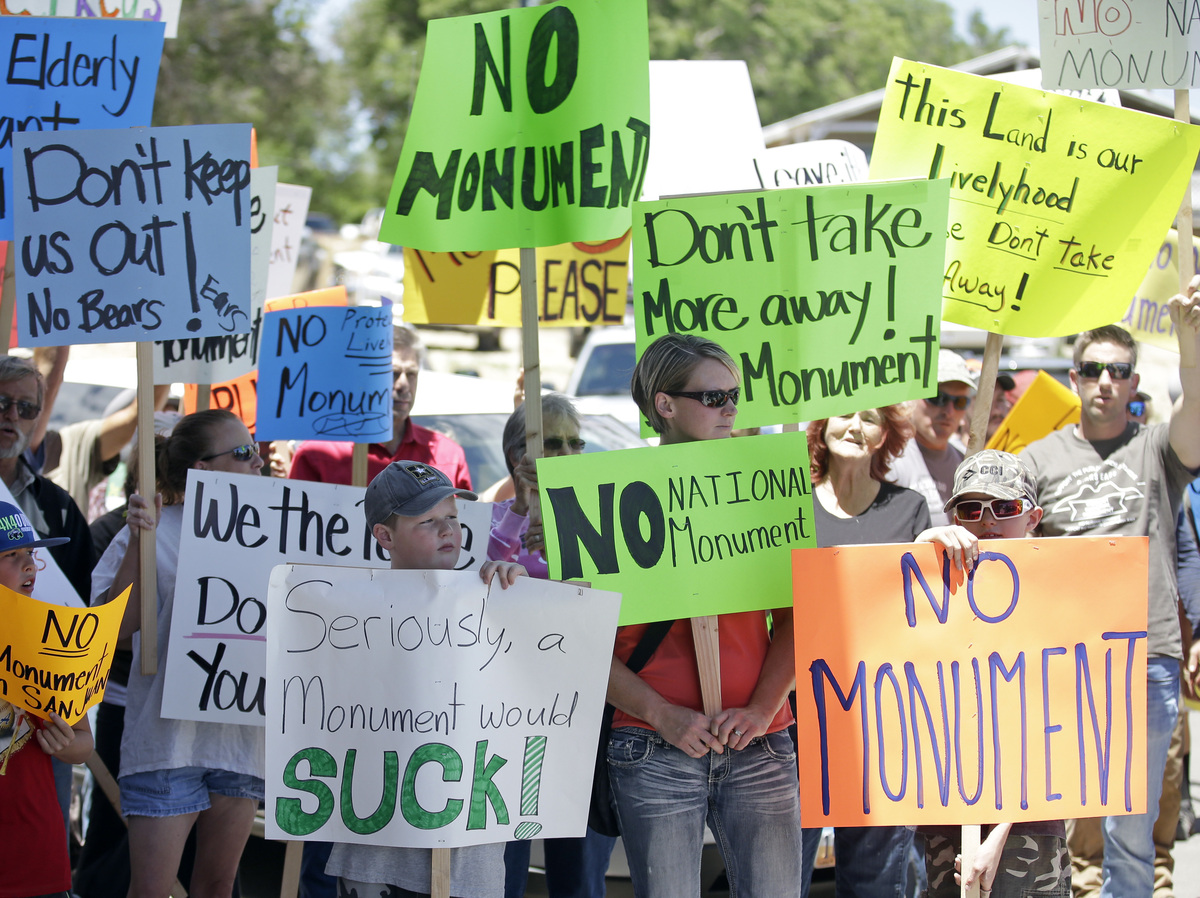 Last summer, protesters opposed to the creation of the Bears Ears monument held signs after U.S. Interior Secretary Sally Jewell arrived for a meeting with San Juan County Commissioners in Monticello, Utah. Now that the area has received monument designation, critics are calling on Donald Trump to undo it.

Bruce Adams is a cattle rancher and San Juan County commissioner. Last year, Adams said that while it's important to look out for the rights of Natives, the white "people who came to the area in the late 1800s" need to survive, too. And for them, that means raising livestock, but also extracting oil, gas, copper and uranium. "Why should one group of people be given consideration over the rest of us?" he said.

The state's top politicians are just as disturbed at the news. Utah Rep. Rob Bishop says in a video, "Utahns will use every tool at our disposal ... whether it is judicial action, legislative action or even executive action" to repeal the Bears Ears decision.

Utah Attorney General Sean Reyes says his office is readying a lawsuit against the federal government. And Utah Rep. Jason Chaffetz, the chairman of the House Committee on Oversight and Government Reform, sent subpoenas to Interior Secretary Sally Jewell and Christy Goldfuss, managing director of the White House Council on Environmental Quality, demanding all documents related to the Bears Ears designation dating to 2013.

But even some tribal members worry that greater federal presence under the new monument designation will make it harder for them to access wild resources. They've been failed by the U.S. government before and aren't inclined to trust it this time around. "As Native American[s], we understand what broken treaties and broken promises mean. We've lived it for the last 200 years," said Rebecca Benally, a Native American and the first woman elected to the San Juan County Commission, at a news conference. Benally has opposed the monument proposal from the start, saying the federal government should focus instead on paving the county's 700 miles of dirt roads and lowering unemployment. 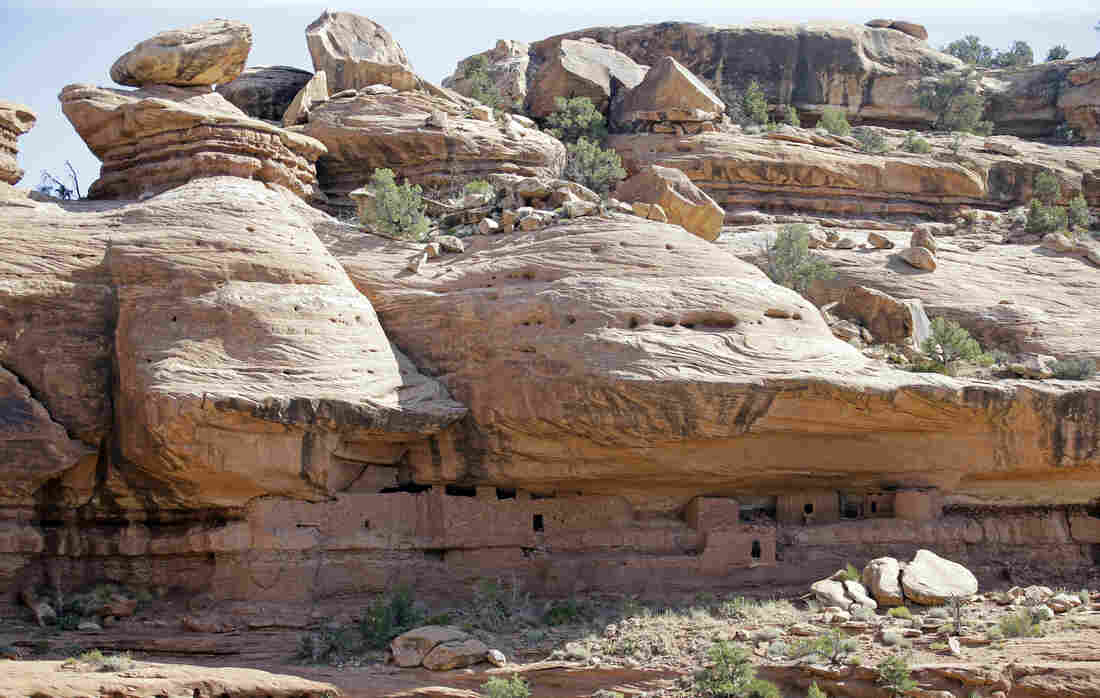 The Moon House is a stunning structure created by the Ancestral Puebloans in the 13th century. It's located on Cedar Mesa, in the McCloyd Canyon, part of the new Bears Ears monument. Rick Bowmer/AP hide caption 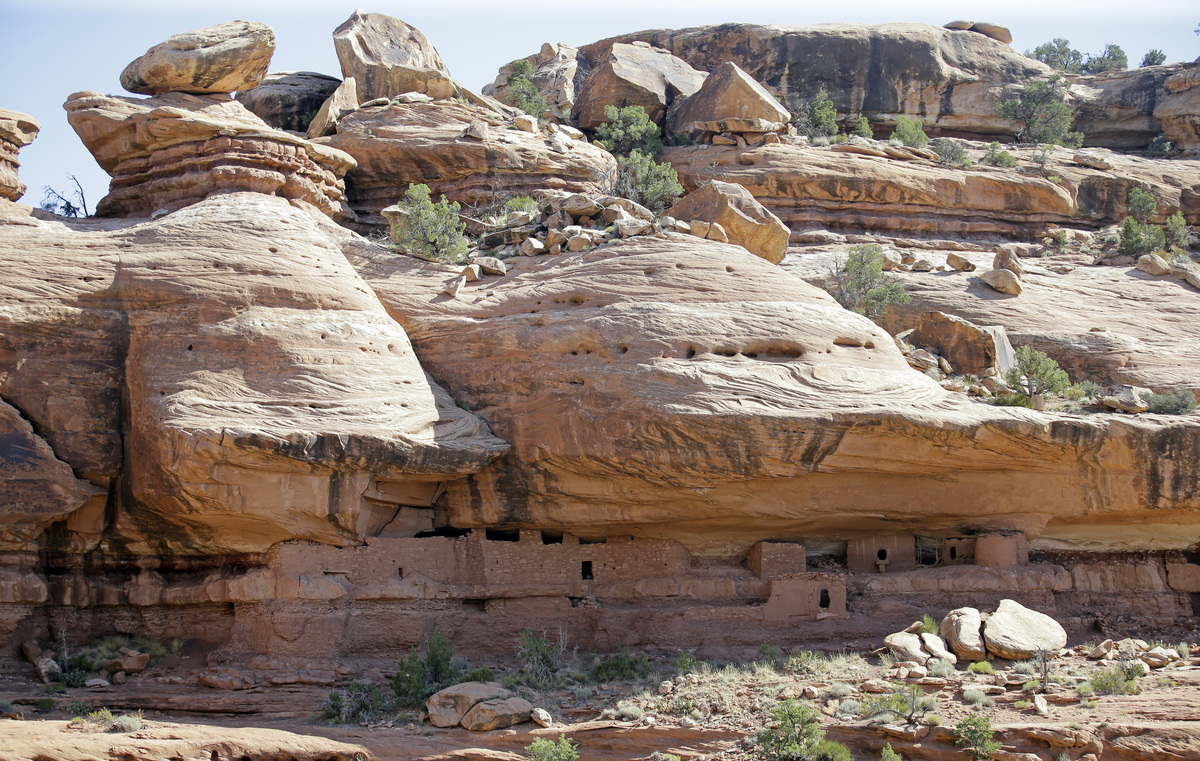 The Moon House is a stunning structure created by the Ancestral Puebloans in the 13th century. It's located on Cedar Mesa, in the McCloyd Canyon, part of the new Bears Ears monument.

The anger in Utah is part of the larger discord over public lands in the West, where almost half of all land is federally owned. But in the case of Bears Ears, the battle lines feel especially deep because of the fissures between Native peoples and the descendants of Mormon settlers.

In 2015, members of the Utah Diné Bikéyah formed the Bears Ears intertribal coalition with five other tribes to draw up a plan to safeguard 1.9 million acres from energy extraction. The coalition sent its plan to the San Juan County Commission, but nothing happened. The tribes claim discrimination, citing the fact that a majority of the commissioners are white.

But county leaders say race had nothing to with it. "San Juan County is the 29th-poorest county in the country. To say we don't want to even look for oil is stupid," former San Juan County commissioner Phil Lyman said. Lyman served 10 days in jail last year and was put on probation from the commission after he led an ATV ride over a Native American archaeological site to protest the closure of Recapture Canyon by federal authorities who sought to protect the artifacts.

Ultimately, the county commissioners rejected the tribal proposal. Instead they sent their own plan, which maintained land for energy extraction, to Bishop and Chaffetz, who at the time were drafting a master proposal for managing Utah's controversial public lands.

Both Bishop and Chaffetz are part of the chorus of voices in the West calling for the federal government to cede control of public land to the states. Bishop is chairman of the House Natural Resources Committee and his biggest campaign donors are from the oil and gas industry, according to The Salt Lake Tribune.

Beginning in 2013, Bishop and Chaffetz conducted more than 1,200 stakeholder meetings with energy companies, ranchers and environmentalists. The intertribal council says it was intentionally excluded. Last year, when the two politicians revealed their Public Lands Initiative, the tribes argued that large swaths of land in the Bears Ears had been left out, leaving it vulnerable to energy companies. Environmentalists raged that the bill favored fossil fuels.

By the time the Public Lands Initiative was released, the intertribal coalition, convinced that it had no other choice, had reached out to Obama on its own. The bill failed to get to a floor vote before Congress adjourned for the year.

The White House, though, kept talking with the tribes, and they got what they wanted. So too did the 71 percent of people in Utah who said they supported protecting Bears Ears, according to one poll.

The Bears Ears Monument will cover 1.35 million acres, less than the 1.9 million acres that the tribal coalition had requested. And the final plan didn't entirely ignore the Public Lands Initiative. For instance, the monument boundaries exclude the Daneros uranium mine, which mine operators say they hope to expand soon.

Mining within the monument will be prohibited, but ranchers can still graze there, according to a statement by the Department of the Interior.

Adams told reporters that San Juan County will join the state in suing the federal government over Bears Ears. Meanwhile, Utah Sen. Orrin Hatch says he is scheduling a meeting with Montana Rep. Ryan Zinke, Trump's pick for secretary of the interior, to discuss what can be done about Bears Ears.

And while no president has ever undone a predecessor's monument designation, it's possible Trump could try to be the first, even though some experts doubt he could win the legal case. Even if he doesn't try, Congress could cancel the monument. It has done so in the past, but only 11 times — and only once in the last 50 years.

This story comes to us from the Food & Environment Reporting Network, an independent, nonprofit investigative news organization where Kristina Johnson is associate editor. A version of the story first appeared in FERN's Ag Insider.