Accessibility links
As Venezuelans Go Hungry, The Military Is Trafficking In Food : The Salt Venture into the black markets and you'll find foods unavailable in the cheaper state-run grocery stores. The military isn't just running the markets — it's getting rich off them, an AP probe finds. 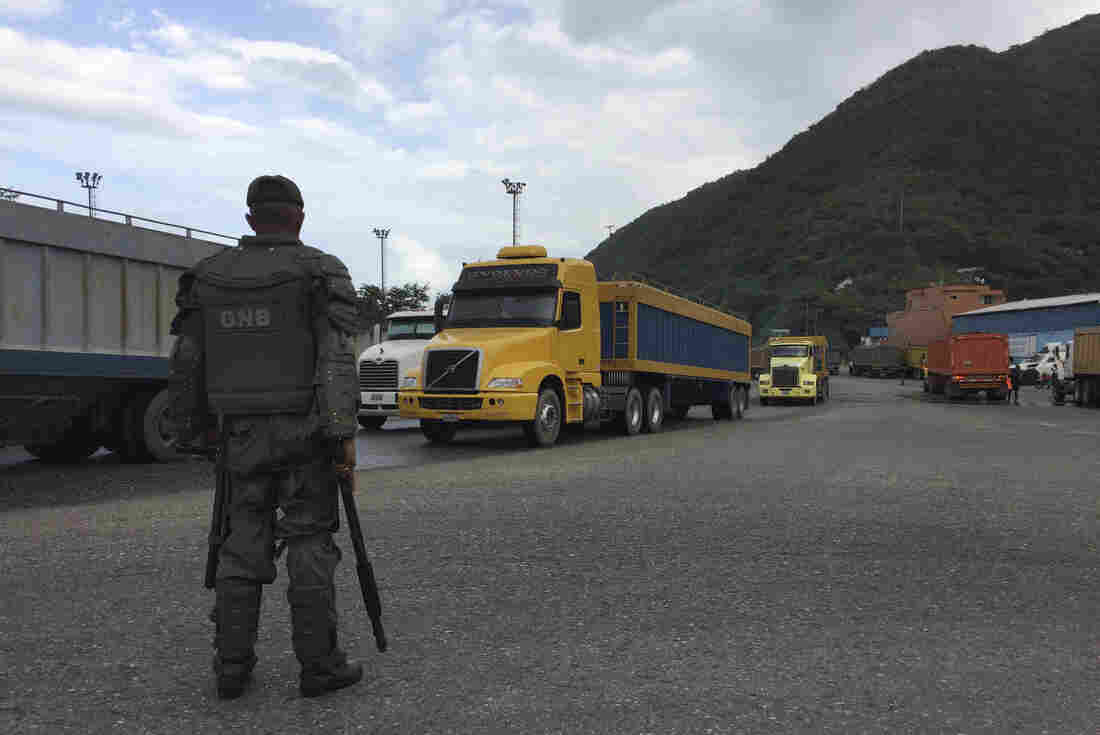 A Venezuelan soldier watches over cargo trucks leaving the port in Puerto Cabello, which handles the majority of the country's food imports. Across the chain of command, from high-level generals to the lowest foot soldiers, military officials are using their growing power over the food supply to siphon off wealth for themselves. Ricardo Nunes/AP hide caption 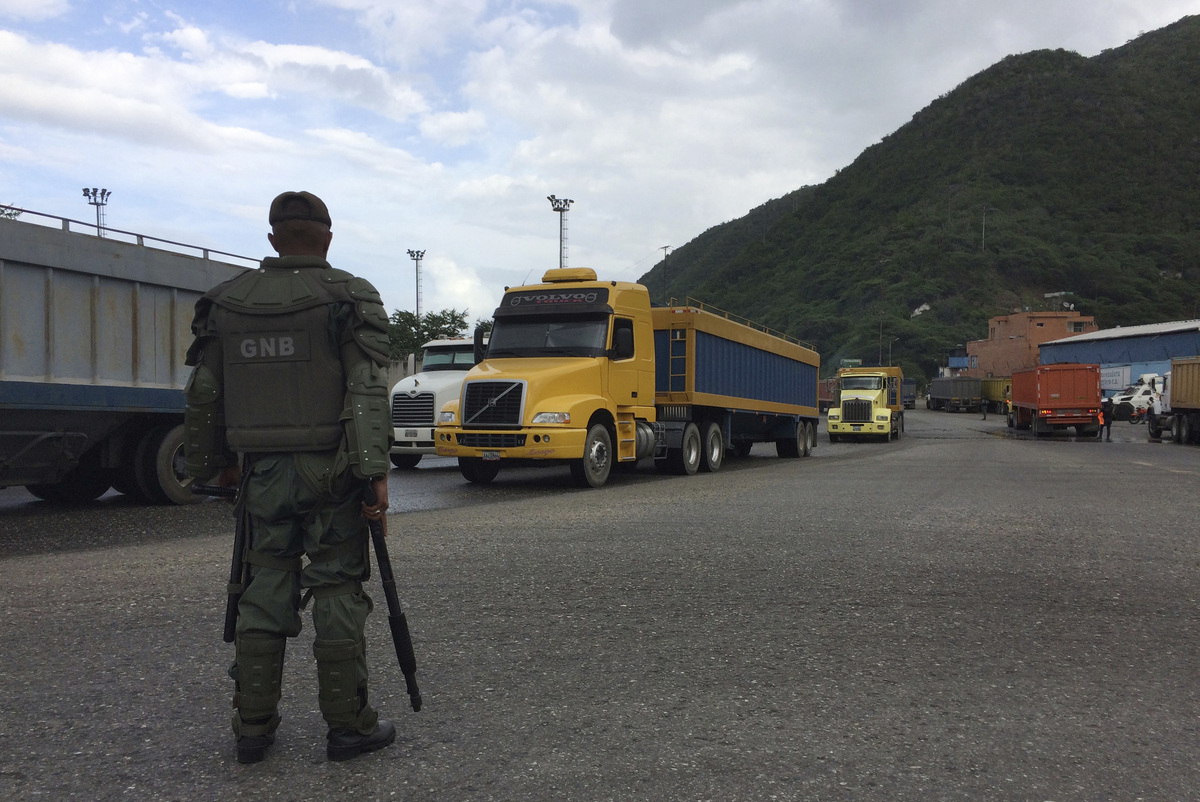 A Venezuelan soldier watches over cargo trucks leaving the port in Puerto Cabello, which handles the majority of the country's food imports. Across the chain of command, from high-level generals to the lowest foot soldiers, military officials are using their growing power over the food supply to siphon off wealth for themselves.

In Venezuela, food has become so scarce it's now being sold on the black market. One person tells the Associated Press, "it's a better business than drugs."

And the food traffickers are the very people sworn to protect Venezuela: the nation's military.

Venezuelan President Nicolas Maduro gave the military complete control of the food supply last summer, after people began protesting in the streets over food rationing. Shortages had become so bad that people were even ransacking grocers — though many were largely empty.

These days, hunger remains widespread. But if you venture into the black markets, you'll find foods that aren't available in the state-run supermarkets, "where people would prefer to shop because it's a lot cheaper," says Joshua Goodman, the AP's news director for the Andes. He was part of the AP team that investigated the food trafficking situation.

"These goods are only getting into the country because the military is importing them," Goodman tells NPR's Audie Cornish. "And when you see the food sold at these makeshift markets, there's usually military people standing by with weapons, watching over it all, if not actually selling the food directly."

And the military isn't just running these black markets — it's getting rich off them, Goodman says.

Goodman spoke with Cornish about the findings of the AP investigation. An edited transcript of their conversation follows.

How does this affect the price of food?

Right now there are some things that are incredibly cheap in Venezuela but in incredibly scarce supply. If you're one of the lucky people to get the food at the government-set price, you are doing quite well. But a lot of people can't afford to spend an entire day in line at a state supermarket, only to find the shelves have already been emptied by the time they get through the door. So a lot of people do have to go to the black market to find food. It's a very unfortunate situation. Something like 80 percent of the country right now says they have lost weight because of what they sort of joke is the President Maduro diet — the forced austerity upon the country.

You found lots of examples of how, essentially, the military is getting rich off controlling the food supply — even when people are trying to bring food into the country.

We documented a case of a South American businessman. He admitted to us that he had paid millions of dollars in bribes over the years to bring food into the country. And he really didn't care who he was paying, because the prices [at which] he was able to sell to the government were so sky high — something like more than double the international price for a shipment of corn, for example. And that made it very easy for him to pay kickbacks to government officials. And of course, that worked its way all down the food chain. This businessman specifically pointed to the food minister right now, who's a military general, or people close to him having received the money that he was paying.

Now what's happened to people trying to bring evidence of this corruption to the president?

Venezuela right now is a very opaque place. We don't have a lot of info about the internal deliberations of the government. There are some people in the military who clearly are upset with this situation. However, there are some serious entrenched interests within the military who are politically important to President Maduro. He is a man who is a hanging by a thread. ... He does not have the popularity of his predecessor and mentor, Hugo Chavez. And the military for him has become an invaluable crutch in the face of mass street protests and sinking popularity and hyperinflation, almost.

So this is a way to keep [the military] paid, frankly. Is that what's going on?

It's a way to keep them fed, you could even argue. Because a lot of this food, I'm sure, is going to the families of the military, to feed their own families and friends. And yeah, it puts money in their pocket at a time when there really isn't much money in the country.

What has shocked you most about this situation?

I think what has shocked me the most is the degree to which the military has really sullied its own reputation. They were seen by many as a disciplined force that could actually provide answers to the serious problems Venezuela is facing. Instead they seem to be much more self-interested, much more corrupt than I had imagined when we started this project.

You've talked to a lot of officials in your story. For average Venezuelans – what are people saying about this?

They're outraged. They know fully well that while they're not eating, people are getting rich. This is an issue that touches the stomachs, literally, of every Venezuelan. A lot of Venezuelans who would be sympathetic to the government are very upset over this issue. And when they find out people are actually profiting from it — it's a potentially explosive situation for the government.