Accessibility links
Marie-Antoine Careme Was The World's First Celebrity Chef : The Salt Marie-Antoine Carême died 184 years ago today. But in his short lifetime, he would forever revolutionize French haute cuisine and gain worldwide fame. Some of his concepts are still in use. 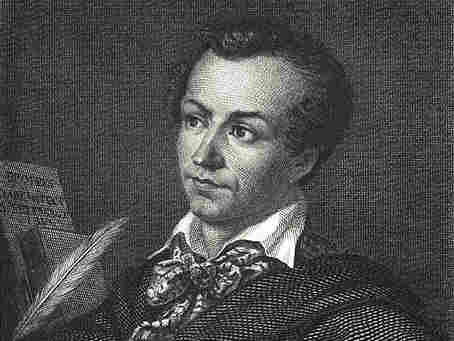 Marie-Antoine Carême began his hardscrabble life in Paris during the French Revolution, but eventually his penchant for design and his baking talent brought him fame and fortune. Wikipedia hide caption

The bustling Paris streets were rutted and caked in thick mud, but there was always a breathtaking sight to behold in the shop windows of Patisserie de la Rue de la Paix. By 1814, people crowded outside the bakery, straining for a glimpse of the latest confection created by the young chef who worked inside.

His name was Marie-Antoine Carême, and he had appeared, one day, almost out of nowhere. But in his short lifetime, which ended exactly 184 years ago today, he would forever revolutionize French haute cuisine, write bestselling cookbooks and conjure up extravagant, magical feasts for royals and dignitaries.

Carême's childhood was one part tragedy, equal part mystery. Born the 16th child to destitute parents in Paris in either 1783 or 1784, a young Carême was suddenly abandoned at the height of the French Revolution. At 8 years old, he worked as a kitchen boy for a chophouse in Paris in exchange for room and board. By age 15, he had become an apprentice to Sylvain Bailly, a well-known pâtissier with a prosperous bakery nestled in one of Paris' most fashionable neighborhoods.

Carême was a quick study in the kitchen. Bailly encouraged his young protégé to learn to read and write; Carême would often spend his free afternoons at the nearby Bibliotheque Nationale poring over books on art and architecture. In the back room of the little patisserie, Carême's penchant for design and his baking talent collided, as he shaped delectable masterpieces out of pastry, marzipan and sugar.

In his teenage years, Carême fashioned edible replicas of the late 18th century's most famous buildings — crumbled confectionery ruins of ancient Athens and pastry towers of Chinese fortresses with flowing trellises of appetizing greenery. Bailly displayed these opulent creations — often as large as 4 feet tall — in his bakery window.

Carême's creations soon captured the discriminating eye of a French diplomat, Charles Maurice de Talleyrand-Périgord. Around 1804, Talleyrand challenged Carême to produce a full menu for his personal château, instructing the young baker to use local, seasonal fruits and vegetables and to avoid repeating entrees over the course of an entire year. The experiment was a grand success and Talleyrand's association with French nobility would prove a lucrative connection for Carême.

French Emperor Napoleon Bonaparte was notoriously unimpressed by the decadence of early 18th century cuisine, but under pressure to entertain Paris' high society, he too summoned Carême to his kitchen at Tuileries Palace. In 1810, he designed the lavish cake for the wedding of Napoleon and his second bride, Marie-Louise of Austria. Carême became one of the first modern chefs to focus on the appearance of his table, not just the flavor of his dishes. "I want order and taste. A well displayed meal is enhanced one hundred per cent in my eyes," he later wrote in one of his cookbooks.

In 1816, Carême embarked on a culinary journey which would forever mark his place as history's first celebrity chef. He voyaged to England to cook in the modern Great Kitchen of the prince regent, George IV, and crossed continents to prepare grand feasts for the tables of Tsar Alexander I of Russia. Never afraid to tout his own accomplishments, a boastful Carême made a fortune as wealthy families with social ambitions wooed him to their kitchens. Later, in his cookbooks, he would often include a sketch of himself, so that people on the street would be able to recognize — and adore — him. 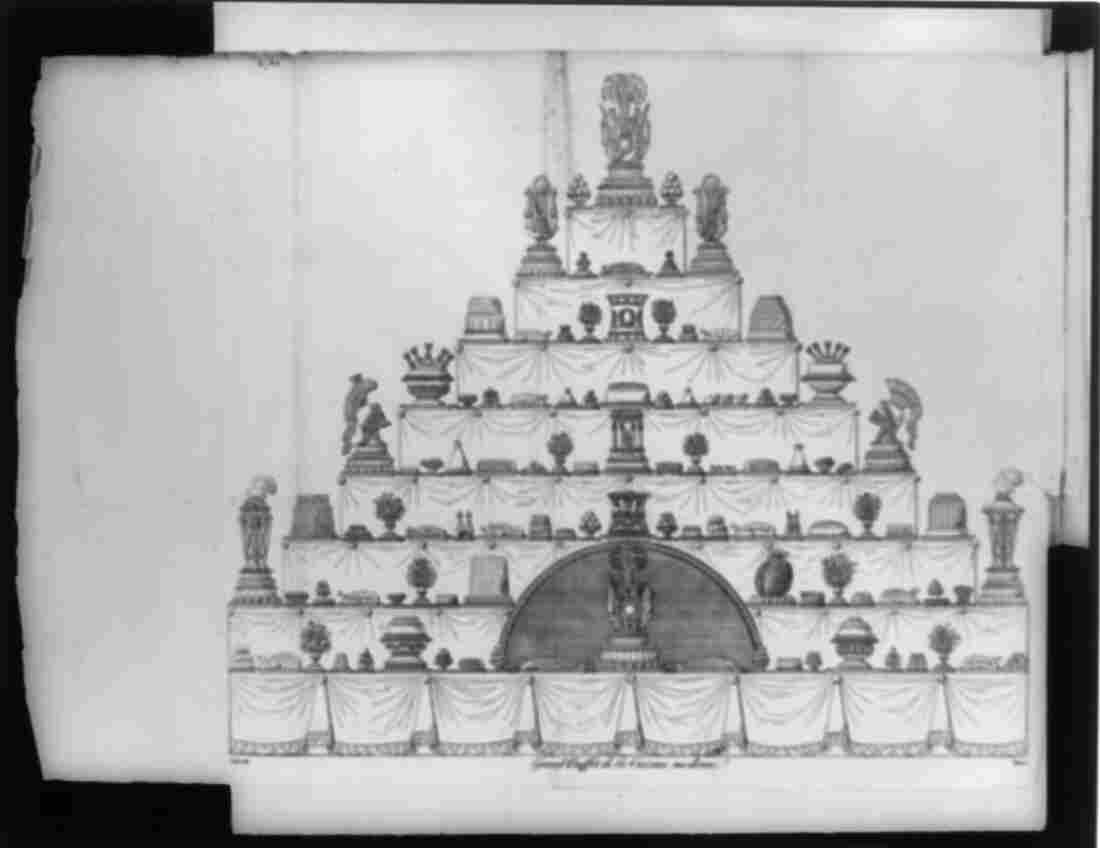 Carême shaped confections like different foods, helmets, Turkish mosques and Greek temples, among other things, on this 8-layer cake illustrated circa 1822. Library of Congress hide caption 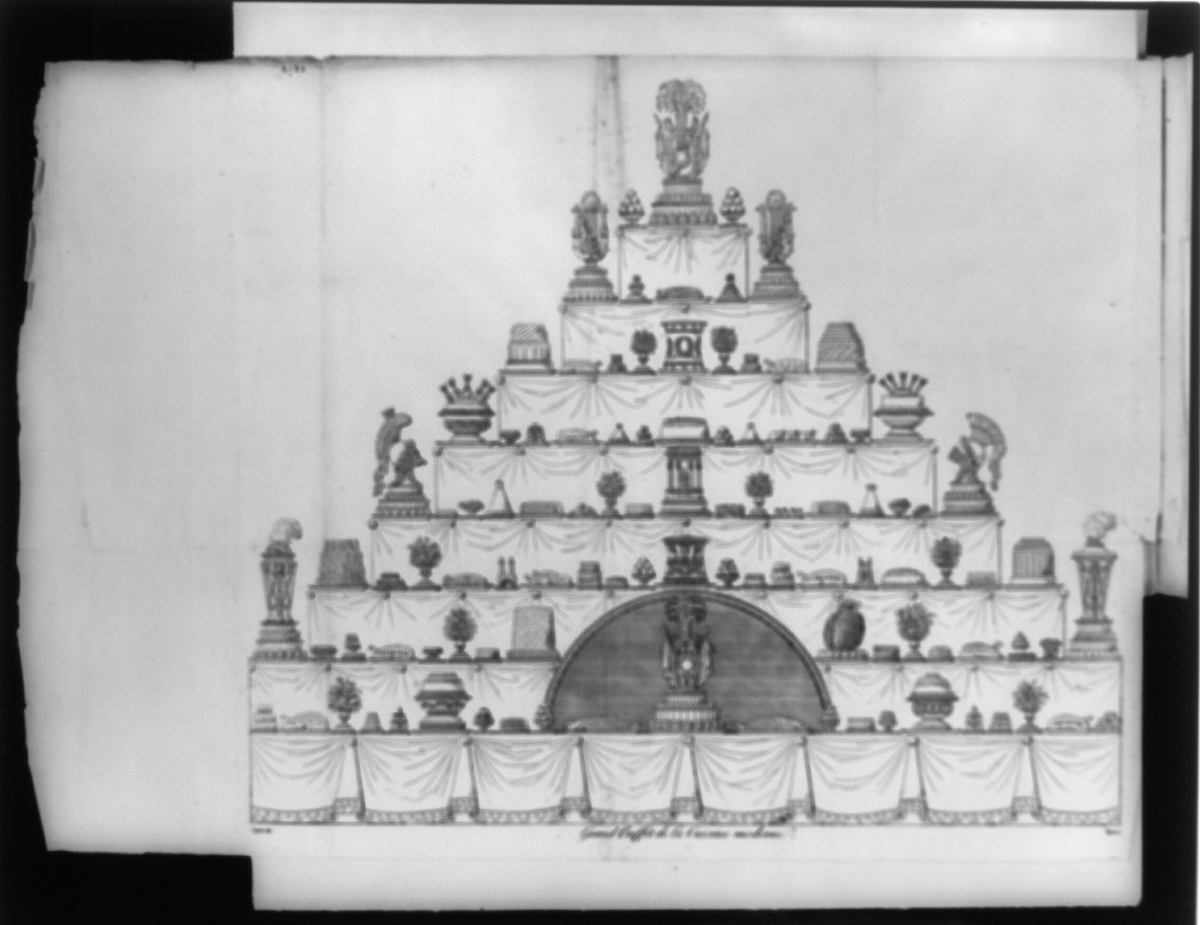 Carême shaped confections like different foods, helmets, Turkish mosques and Greek temples, among other things, on this 8-layer cake illustrated circa 1822.

Carême's gastronomic displays became the epitome of fine French dining; they were bountiful, beautiful and ostentatious. Guests would fall silent in wonder as servants carried Carême's elaborate creations into the dining hall. For a feast celebrating the Grand Duke Nicholas of Russia's visit to George IV's Brighton Pavillion on Jan. 18, 1817, the menu featured 120 different dishes, highlighting eight different soups, 40 entrees (including Glazed veal with chicory and Jellied partridge with mayonnaise), and 32 desserts.

As he traveled through the homes of early 19th century nobility, Carême forged the new art of French haute cuisine. Locked in stifling galleys, Carême conceived his four "mother sauces." These sauces — béchamel, velouté, espagnole and allemande — formed the central building blocks for many French entrees. He also perfected the soufflé, became the first chef to pipe his meringue through a pastry bag and introduced the standard chef's uniform — the same double-breasted white coat and toque (tall white hat) still worn by chefs today. The white clothing conveyed an image of cleanliness, according to Carême — and in his realm, appearance was everything.

Between meals, Carême penned cookbooks that would be used in European kitchens for the next century. His manuals, including Le Pâtissier royal parisien and the massive five-tome L'Art de la cuisine française au dix-neuvième siècle (1833-1847, completed after his death) first systematized many basic principles of gastronomy, complete with drawings and step-by-step directions. Long before television cooking shows, Carême walked readers through common kitchen tasks, instructing them to "try this for yourself, at home" as celebrity American Chef Julia Child might do, many years later.

In the end, however, it was the kitchen that did Carême in. Decades of working over coal fires in stagnant, unventilated spaces (to ensure his entrees would not get cold) had fatally damaged his lungs. On January 12, 1833, Carême died just before he turned 50.

But in his lifetime, Carême, ever confident, could see beyond his short reign in the kitchen. He wanted to "set the standard for beauty in classical and modern cookery, and attest to the distant future that the French chefs of the 19th century were the most famous in the world," as he wrote in his papers.

Decades later, Auguste Escoffier would build upon Carême's concept of French cuisine. But in the very beginning, there was just Carême, the chef célèbre who exalted dining into art.