Accessibility links
Ring In 'Lemony Snicket' On Netflix With A Series Of Unfortunate Recipes : The Salt In the children's books, food is practically a supporting character. So why not welcome the poor Baudelaire orphans with a delightfully miserable repast while binge-watching the new show? 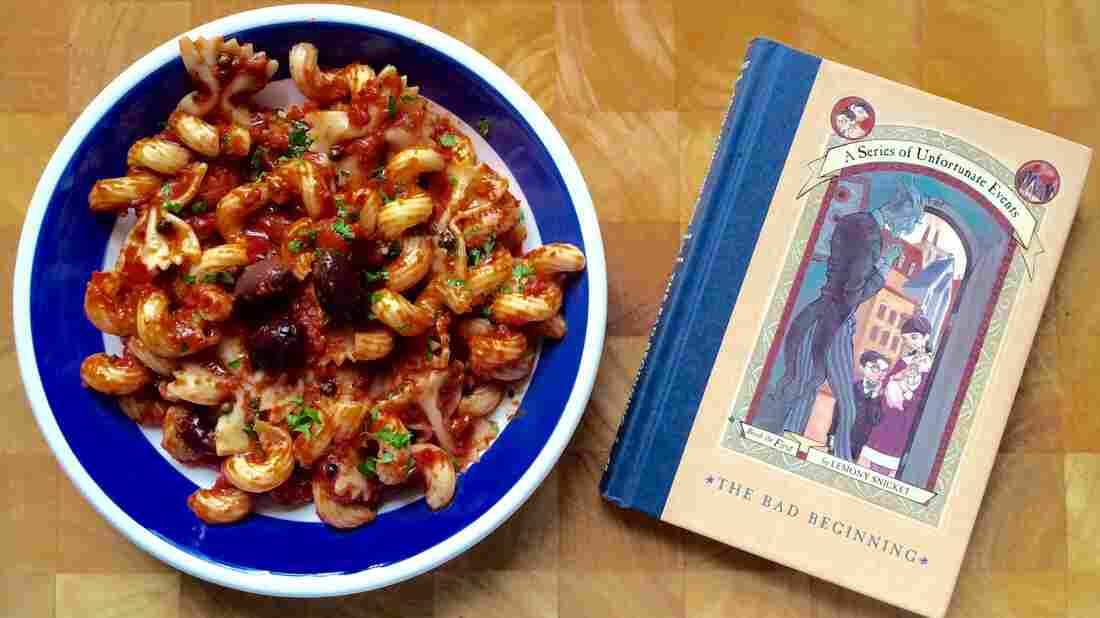 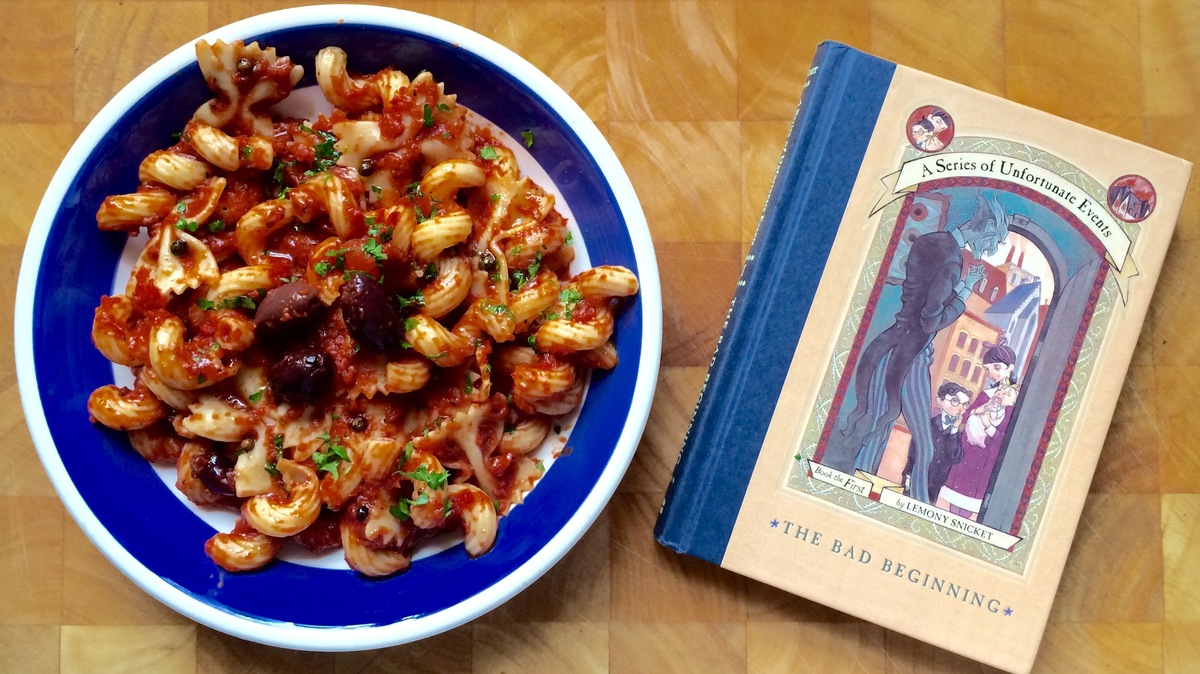 Pasta puttanesca is perhaps the most well-known dish among Lemony Snicket fans, although Count Olaf would have preferred roast beef.

If you are interested in food stories accompanied by overhead videos showcasing recipes involving just three ingredients, you would be better off reading something else. This is because when preparing dishes to accompany the new Netflix adaptation of A Series of Unfortunate Events, which premieres Jan. 13, the more complex the recipe, the more you'll identify with the many trials and tribulations of the orphaned Baudelaire children as they try to unravel the mysteries surrounding them.

Food is often a supporting character throughout the 13 books written by Lemony Snicket, the nom de plume — a fancy word that means "pen name" — of Daniel Handler, starting with the bland boiled chicken, boiled potatoes and blanched string beans the children are fed at the home of Mr. Poe after the tragic demise of their parents in the first book, The Bad Beginning. No one really wants to eat boiled chicken, but luckily there are many other culinary inspirations to be found sprinkled across the series, including pesto lo mein, chocolate pudding and salmon puffs.

Pasta puttanesca is perhaps the most well-known dish among Lemony Snicket fans — inspiring my own daughter when she was 8 years old to join me in the kitchen to discover capers and Kalamata olives; this time around, she'll be making the dish with friends while binge-watching the show at college. It's the dish that Violet, Klaus and Sunny Baudelaire choose to make for the evil Count Olaf when he demands that they provide dinner for his theatrical troupe, allowing the children a cozy afternoon of cooking together before Olaf complains that they should've made roast beef.

When cooking instructor Lynley Jones' son began reading the series, she discovered an unexpected springboard, leading her to create "A Series of Unfortunate Cooking Lessons" for children that she taught in 2015 in Montclair, N.J. "I noticed that a lot of the stories he would share with me included some interesting food," says Jones. "In some books, the food was a front-and-center part of the narrative, like when the Baudelaires make pasta puttanesca; in some cases, the food in the book is horrible, and adds to the Baudelaires' misery." 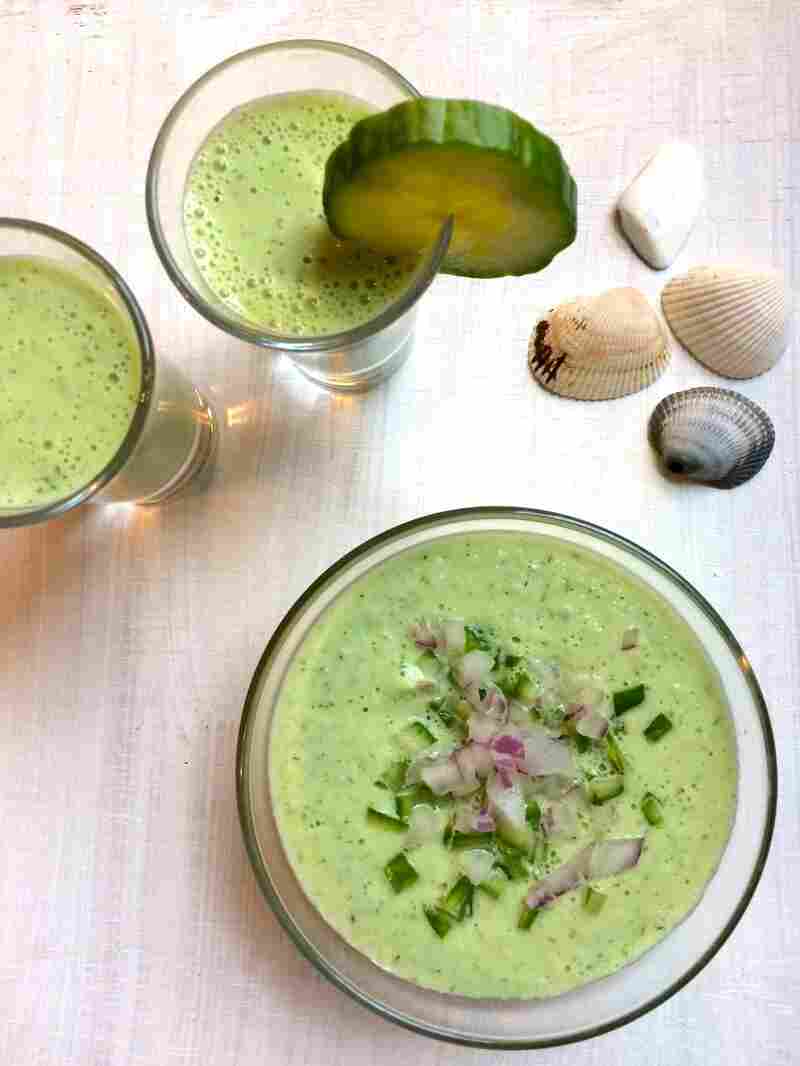 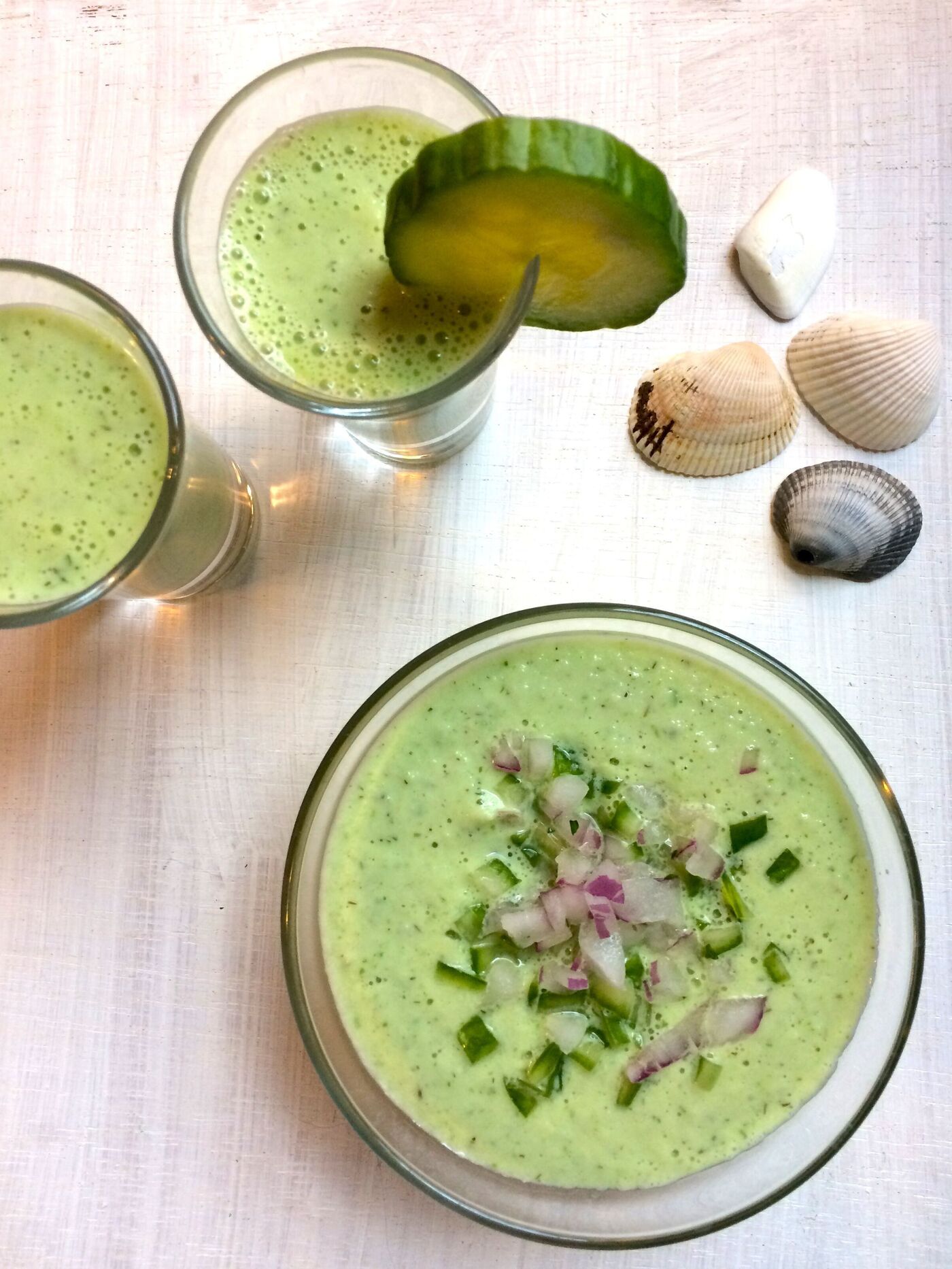 The chilled cucumber soup found in the third book in the series, The Wide Window, exemplifies a truly bad meal, served by the children's Aunt Josephine, who makes only cold food because she's afraid of turning on the stove. As Snicket writes, "On a cold day, in a drafty room, chilled cucumber soup is about as welcome as a swarm of wasps at a bat mitzvah."

Jones' goal with her version of the cooking lesson, which was geared toward kids, was to show how not to make bad cucumber soup, no matter what time of year, calling her version "Not Aunt Josephine's Chilled Cucumber Soup."

Because the first season of A Series Of Unfortunate Events on Netflix encompasses books one through four, you could choose to focus on food that's featured only in those books. But there are many dishes that you may want to throw in to foreshadow what's ahead in Season 2 — a favorite literary device of Lemony Snicket that's well worth emulating.

If you're planning on hosting an "ASOUE" watch party, channel your inner steampunk for appropriately pseudo-Victorian/post-industrial clothing and decor, being sure to sprinkle the dining table with teething rings, ribbons for tying up your hair and magnifying glasses. And, as for food, the inspirations are multitudinous — which, as you know, is a very long word that means "endless."

Here are some not-so-unfortunate recipes to provide you with sustenance for the adventures ahead:

In The Bad Beginning, the Baudelaire children roast garlic, wash and chop anchovies, and pit olives to make a tangy, salty puttanesca sauce. Because they are fascinated by the many shapes of pasta that they find at the grocery store, you may want to cook up a variety of different pastas to create visual interest. Jones' recipe is based on the one in the book; if you can't abide anchovies, try substituting chopped dried seaweed to impart a slightly fishy flavor. 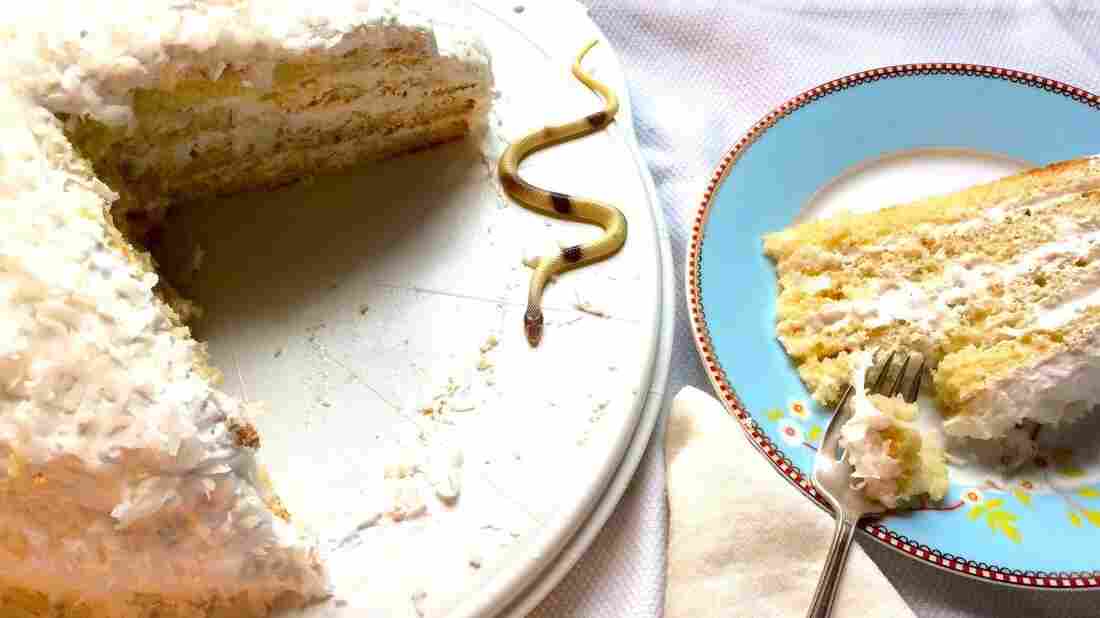 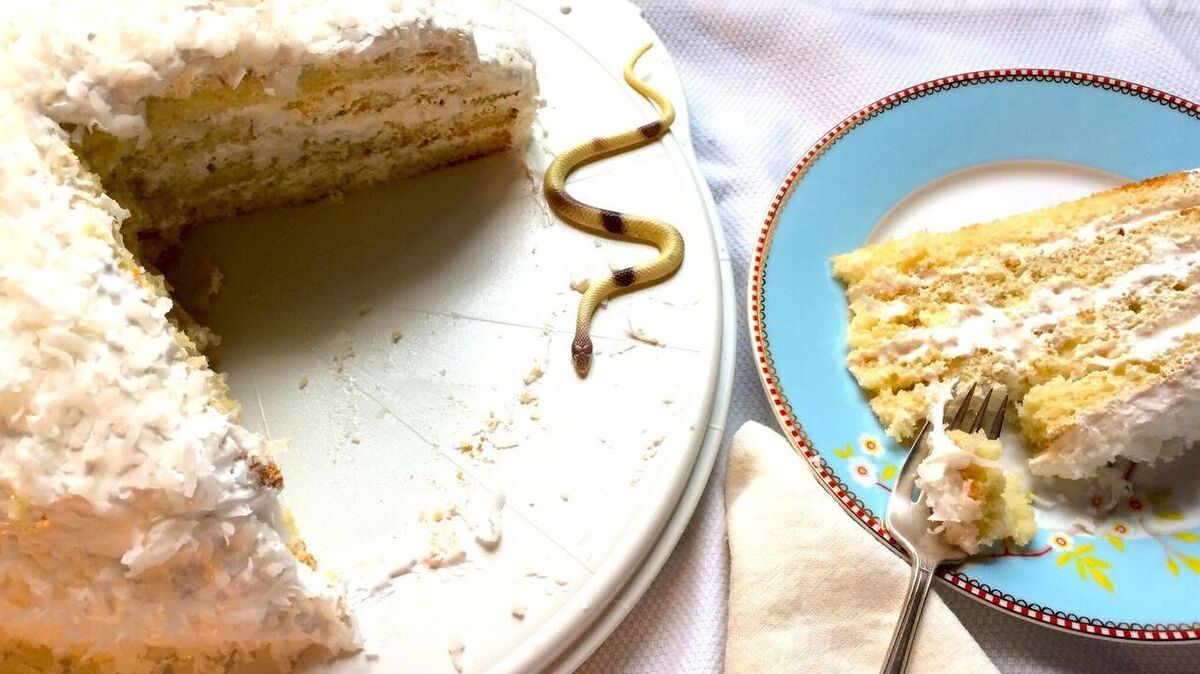 Things seem to be looking up in the second installment, The Reptile Room, when the children land on the doorstep of the utterly charming Uncle Monty, a herpetologist who welcomes them with a freshly baked coconut cake. Of course, this creamy bliss doesn't last long, but the memory of the cake lingers. This coconut cake recipe from Ina Garten, host of the Food Network's Barefoot Contessa, does the trick here, but I like to use a pillowy lemon-scented Italian meringue frosting instead of the cream cheese frosting to lighten up a dreary world — just add a tablespoon of lemon juice to the sugar syrup while cooking.

Poor Aunt Josephine. She's so afraid of, well, everything, that she never seems to enjoy anything and is forever mourning her dear departed husband, Ike, in book three, The Wide Window. Sadly, Josephine's cucumber soup is both watery and tasteless, which only adds insult to injury. Even in the depths of winter, a chilled cucumber soup can remind us of summer warmth, like this recipe from chef Andrew Zimmern of the Travel Channel's Bizarre Foods — even though cucumbers are fairly tame. 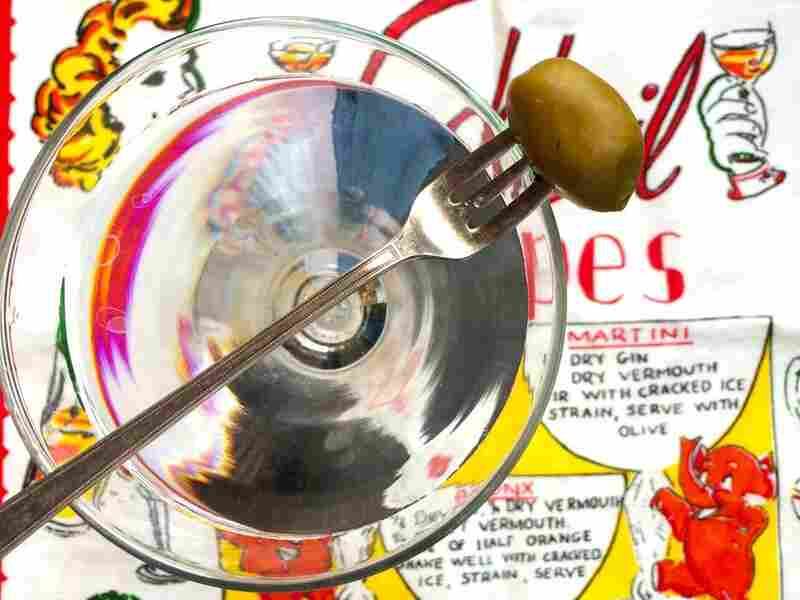 The Aqueous Martini would make for a pretty miserable happy hour, which is exactly why it belongs in a Lemony Snicket book. Kristen Hartke hide caption 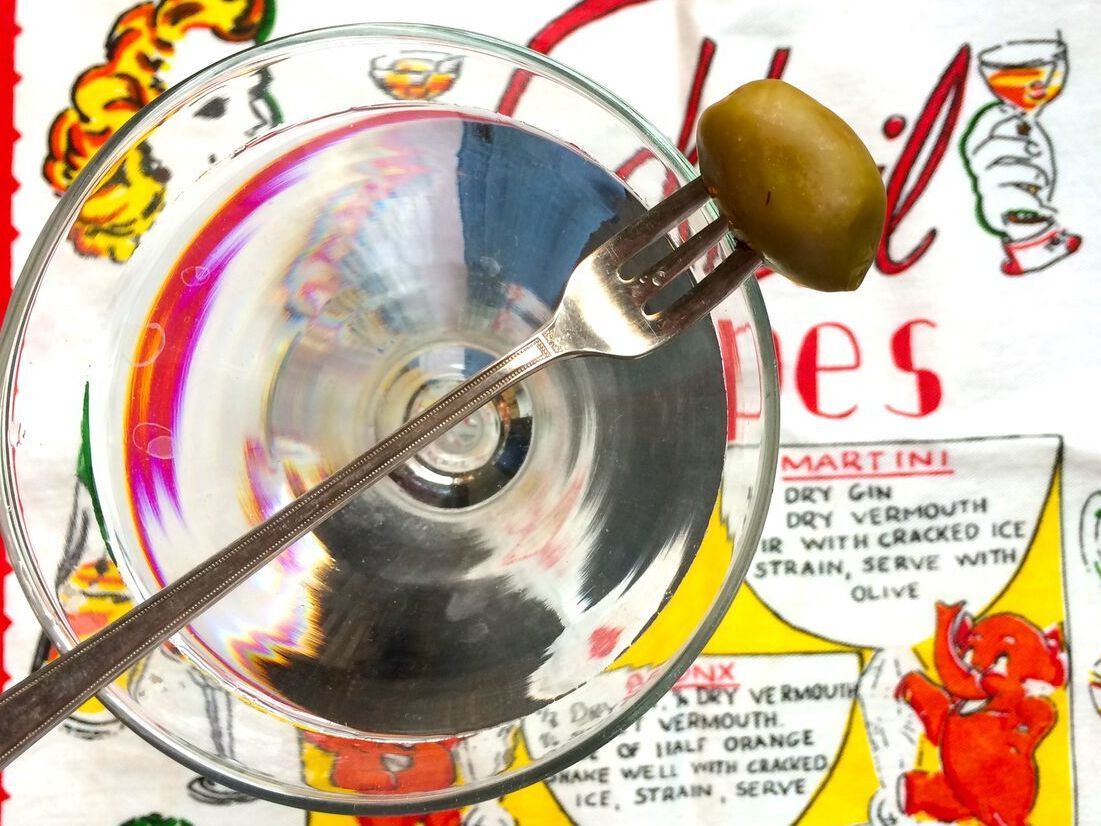 The Aqueous Martini would make for a pretty miserable happy hour, which is exactly why it belongs in a Lemony Snicket book.

Skipping ahead to book six, The Ersatz Elevator, the children are sent to live with the uber-fashionable Esmé Squalor and her downtrodden husband, Jerome. Always concerned, as so many fashionistas are, with what's in and what's out, Esmé favors the Aqueous Martini — water served in a fancy glass and garnished with an olive — until Parsley Soda becomes all the rage. Your guests may appreciate the former more than the latter.

Now deemed criminals and on the run, Violet, Klaus, and Sunny land in The Vile Village, also the name of book seven, where they dodge a murder of crows and try to escape in a hot-air mobile home operated by the kindly handyman Hector — who also introduces them to his homemade enchiladas. I've turned to Mexican chef Pati Jinich, of the PBS series Pati's Mexican Table, for authentic inspiration here, with an enchilada recipe that has just enough bite to even please the toothy infant Sunny.

I would tell you to enjoy this delicious repast while Count Olaf wreaks havoc on the charming Baudelaire children — but what would be the point? Prepare to be miserable, no matter how tasty the food.